Turning tricks, stunting pretty, she’s the bitch from New York City. Newly crowned as America’s Next Drag Superstar, RuPaul’s Drag Race Season 10 winner Aquaria spoke to INTO about why she never had a final line ready to write on the mirror and the odd parallels between her season and her drag mother’s.

You really were a strategy queen, though people didn’t give you credit for it. What was your strategy going into the game?

Win. [laughs] No, for me I just wanted to always put my best foot forward with whatever challenge was presented. The key to that was confidence or the delusion of convincing myself that I was confident enough to do anything. It’s not every day that drag queens are doing half the shit we were doing this season. Whenever I had a moment of self-doubt or, you know, a moment where I was questioning my ability to do a particular task, I’d convince myself I was confident enough to do it. And also never seeing the end of my story was also key to me. Like, I never had an exit line if I had to go home. I was beyond prepared to lip sync every single week. But for me, it was just seeing the crown at the end of the tunnel and running full speed ahead.

Famously, when Violet Chachki was on her season, she never had to lip sync but she always said she had a reveal or something planned just in case. You’re a huge student of Drag Race, so I want to know if you had any things planned during the season for a specific song?

One I can think of was for my “Hats incredible!” runway for the DragCon panel challenge. I wanted to play up a whole lot of the magician aspect of that look and I had a lot of hidden secrets that I was planning on using had I needed to. I even had a trombone that I crafted out of paper taped inside of the top hat that I was going to pull out for the trumpet solo on that song. I was always very prepared just in case anything ever happened because lip syncing and being in the bottom two sucks but it’s an opportunity to show up and show out. For me, had I had to lip sync, I knew I’d have to get through it to make it to the end. 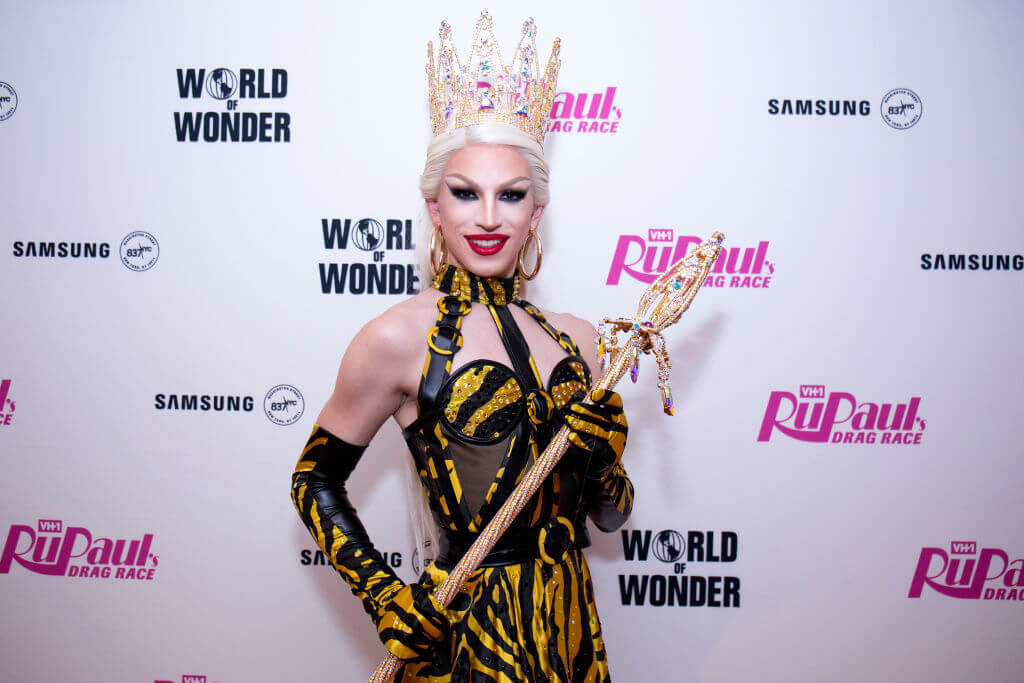 Have you and your drag mother, Sharon, talked about the fact that you ended up being two drag queens with the names “Michaels” and “O’Hara” for the crown?

Oh yeah, well obviously. No one knew this except [the queens] on the show, but when it was the final four, I told my mother, I don’t mean to be the one, but we literally have O’Haras, a Michaels who is a great Cher impersonator, and Sharon Needles’ drag daughter! You can’t write these things, but it’s the crazy life we live.

What is some advice your drag mother gave you before you started the show?

I mean, I tried to keep it kinda under wraps that I was on the show just because I am not stubborn, but I like doing things my own way and for very valid reasons. I didn’t want help from too many people but she always told me to be optimistic, go in with an open mind and really turn it out because I am a fierce entertainment and runway artist. So show that.

What does it mean to you to be the youngest winner ever on Drag Race and then also to be able to snatch the crown?

Well, there’s definitely been lots of other 21-year-olds on the show and Tyra and Violet also won at a young age, but it’s nice to be with a group of girls and earn their respect and their love and get that from RuPaul as well. There’s a lot of time when young people are discredited for their work or things that are assumed about them that are not true and I like to defy those stereotypes and show that I’m using every last bit of my youth and energy to work my ass off to get to whatever level of career or anything that I need to. I’m a hard ass worker and to be respected as a young person and as a hard worker was very validating.