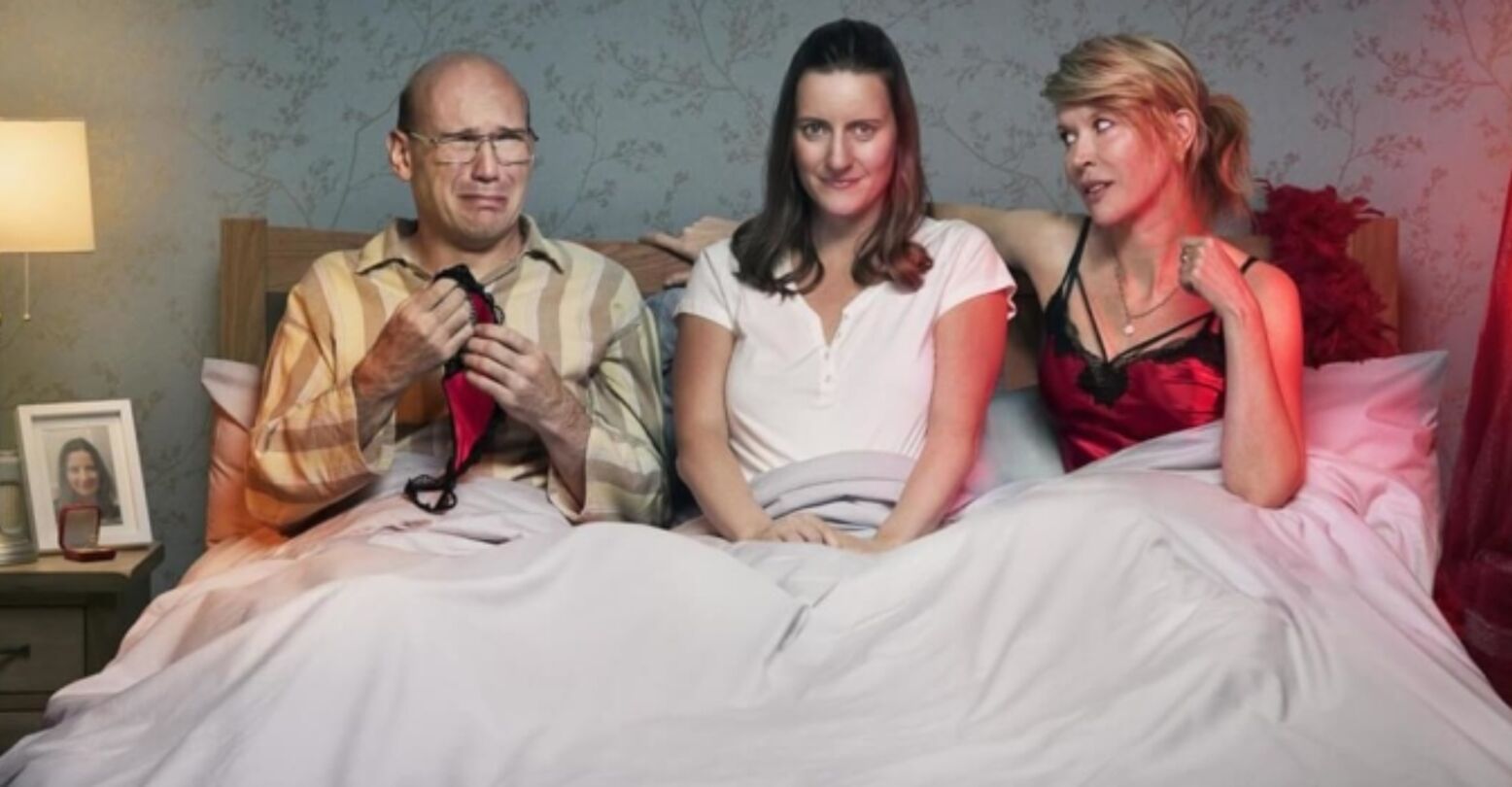 I have to be honest: Sally4Ever is not for everybody. It’s not even really for me—but that doesn’t mean it’s not worth a watch.

The new HBO comedy from Julia Davis is about as absurdist as absurdist television gets. The seven-part first season, released in the final months of 2018, is peak cringe-comedy—each episode feels like a strong cocktail of The Comeback, mixed with Ja’mie: Private School Girl, and a mountain of cocaine. It’s extremely difficult to binge, because you become so uncomfortable so quickly that it must be taken in small doses. That being said, Sally4Ever is about queer women, so you’re probably going to watch it anyway. 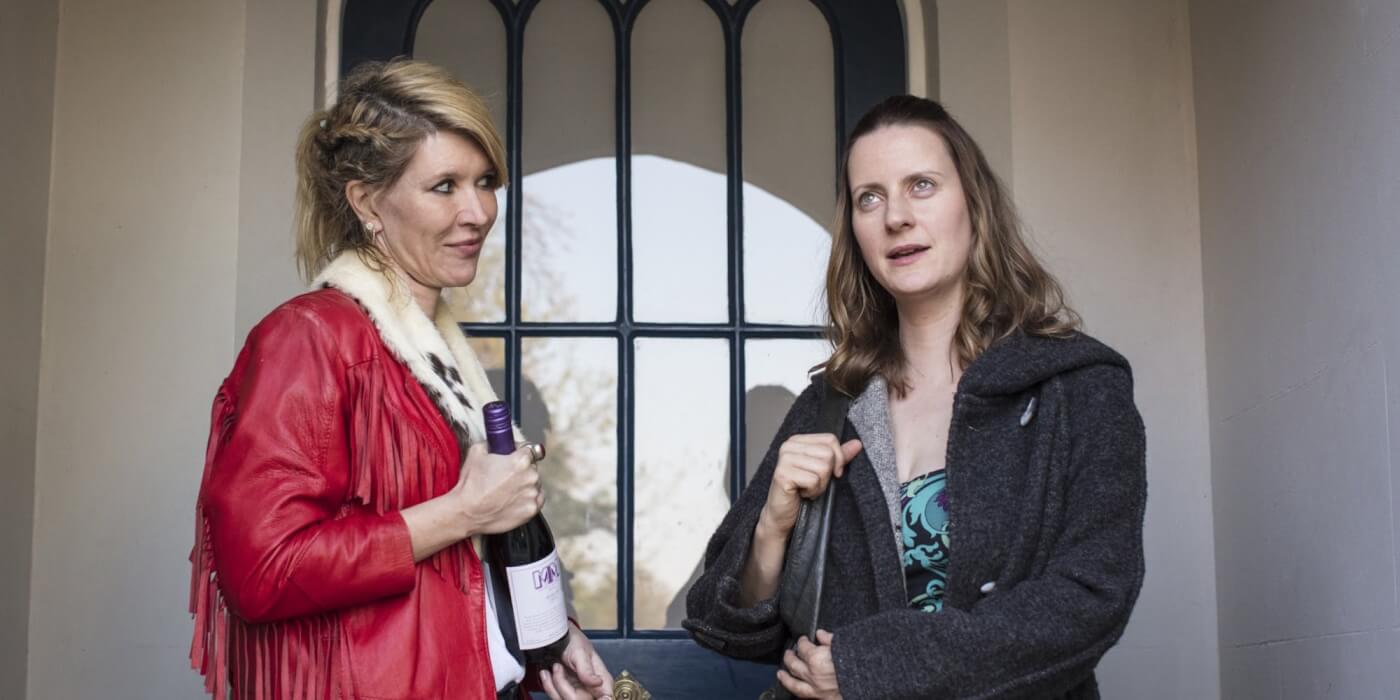 #20GayTeen brought us a deluge of lesbian content on and off the big screen, from the queer roles of Rachel Weisz to lesbian superheroes to a bicurious Anna Kendrick character. Many of the works of this extraordinarily gay epoch proved one thing: Queer female characters are no longer able to be boxed into tired tropes and dated stereotypes. They’ve been set free to be as silly or as terrible as they please. And that culminates in the craziness of Sally4Ever.

The comedy follows a woman named Sally (Catherine Shepherd), a timid, drab woman who is physically incapable of asking for what she wants. She breaks off her painfully boring engagement with a man after having a dance club tryst with a stranger named Emma, played by the writer and director, Julia Davis. Over time, Sally discovers that Emma is psychotic, and a pathological liar, but by that point, Emma is already way too ingrained in her life. Sally also finds out that she has many suitors in her life, both male and female, all of whom are equally bizarre.

One of these admirers is her boss Deborah (Jane Stanness), who puts Sally in countless uncomfortable scenarios, including forcing her to a share a room on a work retreat and subsequently bathing in front of her, and relapsing as an alcoholic, leaving Sally to pick up the messy pieces. If any aspect of this show was able to be taken seriously, I would call it problematic for all the sexual coercion and lack of consent, but it’s just too out there. Or actually, yeah, it’s problematic—it’s just absolutely bananas.

But nothing can compare to the lunacy of Emma. She puts Sally through the wringer with her psychotic manipulation tactics, from darker calculations like attempting suicide to ensure that Sally will marry her, to pettier inconveniences like shitting the bed, or fucking Sally’s male friend, and allowing him to shit on her face. There’s a lot of shitting in this show.

Part of the reason I loved Yorgos Lanthimos’ The Favourite so much this year was for this very reason. There just aren’t many comedies, in film or TV, where lesbians or queer women are given the platform to be funny and queer, to fall in love and be awful, to do the bad thing and be likable. In The Favourite, the three protagonists, Queen Anne (Olivia Colman), Lady Sarah (Rachel Weisz), and Abigail (Emma Stone), are locked in a lesbian love triangle that fuses love and Sapphic lust with manipulation and retaliation. The characters are equal parts hilarious and awful. This is the same reason why Phoebe Waller-Bridge’s Killing Eve was so intoxicating; the show offered us two queer female leads who are powerful, candid, and complex—and they’re queer.

The same is true for the two leading ladies in Sally4Ever; both Catherine Shepherd and Julia Davis are unbelievably funny, plus, they also happen to be queer in the show. The comedy isn’t some dreary lesbian sob story—which, don’t get me wrong, I love every once in a while too—and it doesn’t have tropey characters who get offed in the end. These women are audacious and demented and untethered—it’s queer female characters like we’ve never seen them before.

Even the sex scenes are brimming with this madness. In the first episode, when Sally and Emma first get together, the scene is both steamy and hysterical, with slow-motion cuts of their breasts smashing together, which is less male-gazey and more satirical, like a caricature of lesbian sex. In another episode, the women’s aggressive scissoring leads to the near-death of a shocked old woman.

As a queer film and TV critic, I usually dissect lesbian sex scenes as I watch them, mulling which ones feel sexy and true to form, and which feel stripped of sexuality or infused with the male gaze. But in Sally4Ever, I was able to sit back and laugh at uncomfortable or over-the-top sex scenes in a way that way straight people take for granted; almost every hook up in shows like Insecure or Broad City (which does feature one similarly hilarious queer tryst) feels this way. Lesbian sex scenes are often too serious and devoid of fun or lightheartedness.

If you have a high cringe threshold, I’d definitely suggest giving Sally4Ever a shot, because it truly is one of a kind—and hopefully just the first of its kind. If you’re not up for vomit, shit, and bloody tampons, that’s totally forgivable. But just know that queer women are finally being allowed to be funny and gay, and 2019 will hopefully bring us a hell of a lot more of that.