In its 43 years of existence, Saturday Night Live has had a contentious relationship with most marginalized groups, including people of color, LGBTQs, and women. But in the last few years, it seems Lorne Michaels has finally seen how diverse writers room can offer new and nuanced comedic characters and scenarios that are both specific and universal (read: not just straight, cis, and white). When the room was void of queer voices, most gay sketches or personalities were stereotypical caricatures, making the community the butt of stale jokes. A significant change seemed to stem from the addition of out writer Chris Kelly in 2011, and major player Kate McKinnon (an out lesbian) in 2012.

Since then, Kelly served as Co-Head Writer (with writing partner Sarah Schneider) from 2016-2017 before leaving last season to head his own show on Comedy Central. And with that shift, the show took on its first-ever black co-supervising writer, Michael Che, and also brought on its first black lesbian writer in stand-up comic Sam Jay. (The only other black lesbian to have been a part of SNL in its four decades of existence was Danitra Vance, a repertory player in 1985-1986 who was given stereotypical mammy and maid-type parts to play, which was part of what led to her choice to leave at the end of her sole season.)

Atlanta-born, Boston-raised Jay is a master of observational comedy. She’s the kind of humorist who is crafting a joke about fellow bus passengers or the white woman crying in public. She’s not self-deprecating; instead, self-aware.

“I really hate when they ask me for money,” she says in a joke about “homeless white dudes” asking her for money. “Like bro, I’m a black lesbian–I’m never gonna give you shit. I have too many adversities. I’m not gonna give you money.”

In an interview with VICE in December, Jay said she hopes to bring her specific viewpoints to sketches on SNL.

“Like urban culture stuff, gay culture stuffwomen stuff, that they may not necessarily have their pulse on,” she says. “Just who I am, you know what I mean?”

And so far this season, it appears SNL is trying to appeal to its more progressive audience in a post-Trump era. Jay’s spot in the writers room undoubtedly helps nudge what Kelly and Che have led to move in a much more inclusive direction, and the show is funnier for it.

“I just contribute ideas that are important to me and that make me laugh, you know? And I think, by being black and queer by default, I represent that because that’s just what I am,” she tells INTO.

Jay says she has never felt like a token in the room, though, and that her co-workers don’t come to her for the “gay” or “black” or “woman” POV, and she’s also never had to call anyone out for some homophobic, racist, or sexist ideas.

“Not in that type of direct way,” she says. “I don’t think I’ve ever felt the need to be like ‘Hey, this is uncool.’ I feel like everybody is pretty aware and inquisitive to the fact that there’s different people in the world, and I’ve never kind of been offended by anything that anyone presented or brought forth or pitched at the table. So I would say I’m always kind of speaking from that perspective, like I said, because it’s who I am so it’s naturally is the perspective that I bring, but I’ve never felt like I needed to do it in a championing kind of way.”

What Jay felt most at odds with her peers about was that she came from a stand-up background, whereas most of the other SNL writers past and present come from improv and sketch-based schools like UCB or Second City.

“I was scared of it and I tend to try to gravitate towards things that make you fearful,” she says. “It was something I’ve never done and so it was like stepping into the shark tank and kind of being a guppy. Like, these are the best of the best and most of these people have improv backgrounds and sketch writing backgrounds and I don’t. I have a stand up background, so it was an opportunity to kind of you know, swim with the sharks and learn a skill from the best people you could possibly learn it from.”

Stand-up, though, affords her a different perspective on “real life, real world situations,” she says. “I think stand-up is kind of–we’re not as nice.”

Jay says she finds her job “surreal” at times, but just as many other days feel like, well, work.

“I mean it’s a live show that’s live that happens every Saturday,” she says. “There’s a lot of moving parts so yeah, it’s a lot of work and the hours are long because things are ever changing and ever moving around because it is a live broadcast.”

She doesn’t have a particular cast member she likes to write for (“I find it fun and exciting just to be doing it. It’s always fun just to see the cast take these characters and bring their own life and their own ideas to them and to see where they take over and kind of like push it is always really cool.”), she just hopes viewers will know that every line of dialogue and comedy has a lot of thought behind it.

Growing up, Jay was a more passive fan of the show than she was a fanatic. She cites Eddie Murphy’s years on the show as the most formative for her (“He was like my favorite person as a child, so any Eddie Murphy sketch I probably know front to back.”), but more recently, she cites Maya Rudolph, Amy Poehler, and Tina Fey as bringing her back to watching the show before she was hired to make it happen.

Obviously, she’s hoping people are tuned in now that she’s working long hours to make sure it goes off without a hitch. Jay has also popped up twice on the show–once as an audience member in a monologue delivered by host Will Farrell, and as a gender-bending Carlton in a Fresh Prince of Bel-Air spoof during Jessica Chastain’s episode.

“It was a good time,” she says of getting to have some face time. “I’m not against it, but I’m also kind of just in it for the whole experience, so I don’t really feel the need to do anything in particular. I’m not like ‘Oh, I have to get on a sketch or I have to become cast. I just want to like learn and grow in it and kind of wear the suit until it doesn’t fit anymore.” 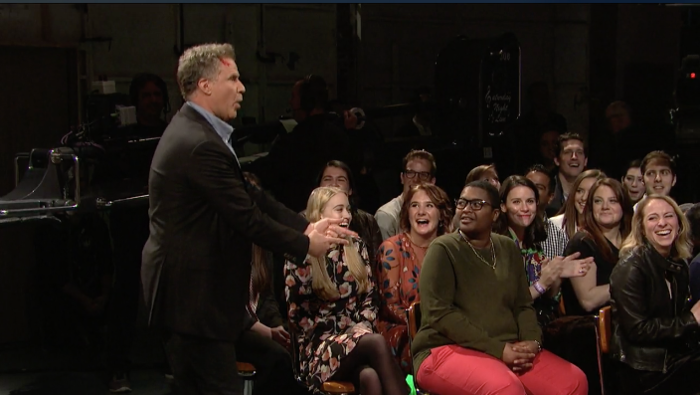 Jay has already had her own Comedy Central half-hour, and next up, she has an upcoming spot on Netflix in their new round of 15-minute stand-up specials, which she’s shooting in between regular SNL workdays.

“I’m not 100% sure, but it will be new stuff,” she says of what kind of material viewers could look forward to. “It’s a few weeks out, but I have known about it for about a month, a month and a half, so I’ve had enough to prepare. I have a pretty demanding writing job right now, so it’s kind of tough to find the balance between the two things. So I don’t feel as prepared as I normally would feel coming into a situation where I’m about to only do standup the entire time, you know?”

And after the SNL suit grows too snug, Jay says she’s hoping to dedicate more time to her first love: stand-up.

“I want to do all the things,” she says. “I want the hour, of course. I want my own hour special. I think that’s like the bigger goal–the goal that I kind of came in with that still hasn’t been checked off. And you know, as I write more, and even from before SNL–I was writing my own pilot and writing another pilot with friends, and so to see those projects actually come to fruition would be absolutely amazing. So, you know, just keep being creative and keep pushing my ability to be funny in these different directions.”