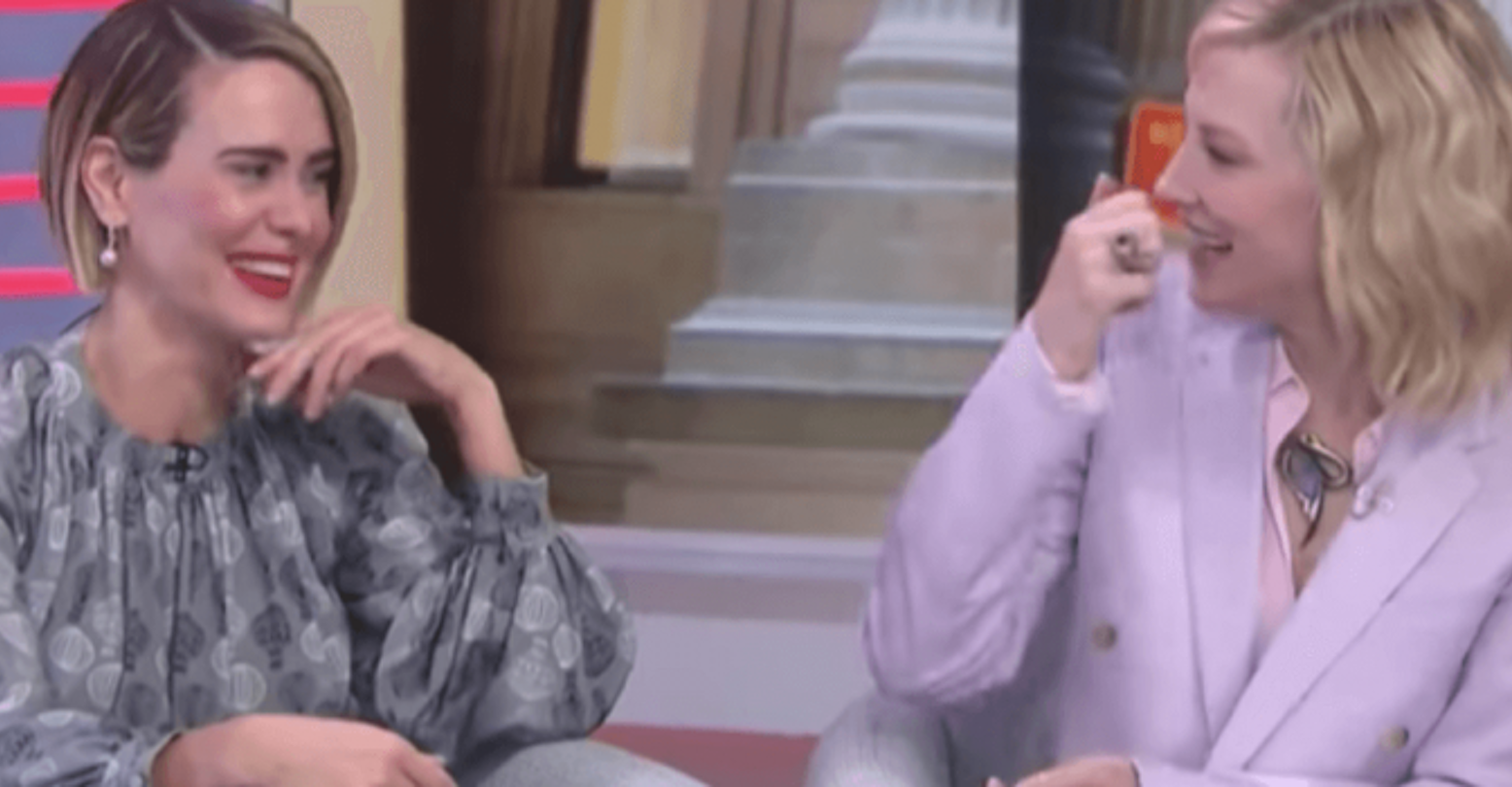 Ocean’s 8 co-stars Sarah Paulson and Cate Blanchett graced The Today Show this morning with a completely off-the-rails interview, one of the funniest live interviews I’ve seen on TV. How hilarious, you ask? For perspective: Jennifer Lawrence wishes she could be this funny on a talk show.

In the almost six-minute clip, there was barely a millisecond of silence, let alone room to breathe between the two women and host Hoda Kotb, who stepped all over each other in this touchy-feely, lively, candid interview.

Paulson and Blanchett come in real hot, when Hoda calls them out for clearly having a “thing going on,” to which Cate replies, “It’s over,” and Sarah adds, “It ended about an hour ago.” Blanchett continues to roast her co-star for her outfit, (“get a new stylist”) and for having less prestigious awards than her Ocean’s 8 sisters.

When the host asks where this fiery rapport stems from, the two women had to remind her of the first movie they worked on together—the Oscar-winning Carol. The giggly and garrulous Sarah Paulson hits back at Cate, prodding, “[Cate] was nominated for an Academy Award—which she did not win!” Hoda swallows her nervous laughter and buries her head in her hands, turning a shade of red recognizable to any third- or fourth-wheels witnessing a stressful amount of sexual energy that they’re not involved in. Cate retorts, “I tried! I tried really hard—I did campaigns, I wore outfits, and I didn’t win.” She asks, “What’s wrong with that Academy?”

At this point, Paulson and Kotb are both wiping visible tears from the corners of their eyes, cackling as Cate delivers another burn about Paulson being a dreaded, lowly TV actress, as opposed to a glamorous, Oscar-nominated film star like herself—“Oh, you work in TV?” She whines, in a faux-bitchy voice. “She makes me cry,” Paulson laments playfully.

A now-sweating Kotb finds a single beat in the loquacious interview to desperately grab the reins, asking the duo who signed on to the con movie first. Cate wisecracks that she signed on first, but tried to get out of it once she found out who else was in the cast, nodding to Sarah Paulson. When the producers flash a photo of all eight stars of the film, Cate points to Sarah and quips, “Oh, they kept you in.”

After twisting in the wind for almost four long minutes, Hoda finally phones a friend, inviting Savannah Guthrie on stage to bring it on home, which of course, only makes things worse. Short a seat, Guthrie shares Hoda’s chair, which Blanchett mimics, hopping on to her co-star’s lap for some physical repartee. Paulson sticks her hands through Cate’s armpits, miming Blanchett’s arms. And when Cate finally stands up, freeing Ms. Sarah once again, the three women jokingly welcome Sarah back.

The hosts suggest that the movie should really just be called Ocean’s 2, and Guthrie insists that the two co-stars are in love, which sent both women reeling once again, blabbering over each other and bursting into guttural belly-laughs.

“I look like I died and I was embalmed,” Sarah jokes, pointing to herself in the film’s poster as the rollercoaster clip comes to an unwelcome close.