Trevor Larson and Bridgette Bayley have worked for some of the most successful street brands geared towards women in the last decade, including Wildfox, Jeffrey Campbell, and Nasty Gal. When it was time to move into launching a brand of their own, the openly queer President and Vice President of Saturday School knew they wanted it to be a cross section of culture and comfort; niche and nostalgia.

“Saturday School is kind of a reflection on our time growing up in the late ’80s and mid-’90s and the culture that we took away from that, combined with the current climate of legalization of cannabis and acceptance of queer culture,” Larson tells INTO. “All of this stuff that was really counter for us 15 years ago, 20 years ago, which is now kind of mainstream, which we now want to celebrate that with a look back of retro vibes but with more inclusiveness.”

The new line of retro-inspired graphic knitwears launched this past spring, and is already building a favorable following on Instagram and among the likes of Mila Kunis and Jonathan Van Ness. Saturday School’s back to high school-themed lookbook has highly-teased hair on cheerleaders with bad attitudes and cigarette-smoking bad asses in rainbow stripes, all shot on analog film and Polaroids to help build on the vintage aesthetic.

“We tried to do a little bit of an authentic spin on things when we can,” Larson says, such as “changing the saturation of the color so it looks a little bit different than what you’re seeing everywhere else.”

“But because we’re so new at this point, we’re putting a lot of what we want to do for the line out in the universe and seeing what the reaction is,” he continues, “and it’s really exciting.”

Larson says that the items bearing retro rainbow designs have been getting “the strongest reaction,” and that retailers and customers alike are not only loving the LGBTQ connection, but also the design.

“This spring collection has some really cool T-shirts that have rainbow hits just in the right places. We also are combining that rainbow print with a lot of like really bright colors, so rather than just printing on a white or black, we’re printing them on cerulean blue or bright purple or maybe colors that you wouldn’t typically think are going to work,” he says. “But we’re finding that the customer’s really responding to that and we definitely plan on keeping that a pivotal, core part of our DNA going forward.”

While most millennial women’s brands focus on cutesy heteronormative phrases, Saturday School is more interested in speaking to the rebel girls; the ones who want to wear shirts like “Stay Young Get Stoned” and “American Teen Princess,” a nod to Drop Dead Gorgeous rather than a literal statement.

“The main thing that separates us from another graphic apparel line certainly is the quality,” Larson says. “Both [Bridget and I] come from fashion brands that really put an emphasis on the touch and the quality to the hand and everything we do is made in America which is really important. That first of all will distinguish the product from what you can find elsewhere in the market.”

Saturday School’s shirts are as soft as they are stylish, with desirable oversized fits that allow for many different bodies to try them on for size. They currently size from extra extra small up through double extra large, which, because it’s a relaxed fit, can fit bigger than what that size may normally cater to.

“We know that the average American consumer is now a women’s size 16 and most contemporary brands don’t even produce a size that accommodates that,” Larson says. “We don’t consider calling it plus or consider it different. We don’t have a separate size scale.” 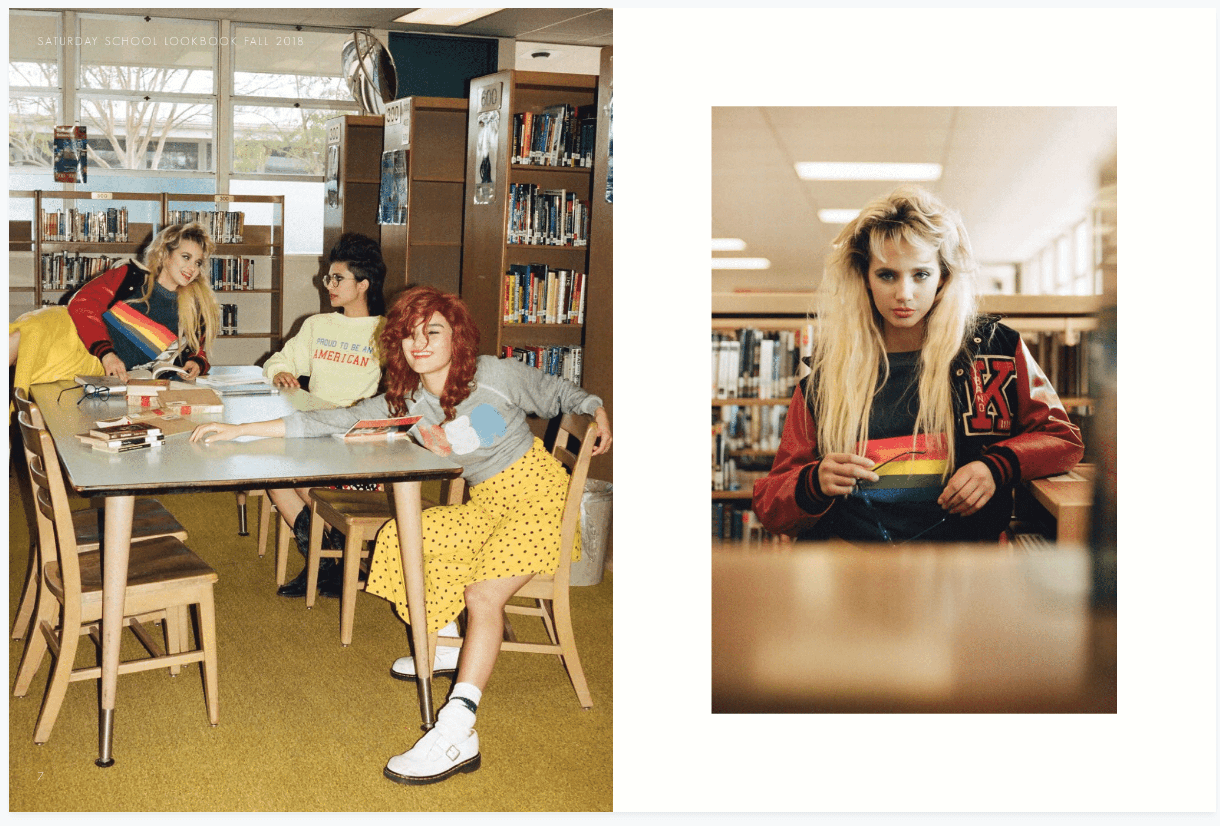 And while the line is being marketed toward women, Larson says the intent is for Saturday School to be for everybody. They have plans, he says, to shoot unisex styles on people of all genders and the drag community in an upcoming lookbook.

“We do have plans to bring in men’s styles — but men’s would be in air quotes because eventually, we want to make the line essentially unisex,” he says. “We want everyone to be able to wear everything and so eventually, we’ll probably not distinguish any sexes on anything and it’ll just be about the fit.”

Since the launch, Saturday School has primarily been sold in specialty boutiques and online. With 30 retailers as of press time and deals with Bloomingdale’s and Nordstrom coming to fruition, Saturday School is eyeing an even bigger fall with a presence in several brick and mortars.  But when it comes to serving big box stores with queer and cannabis-focused content, Larson says he is finding Saturday School to be right on time.

“You know, five years ago where it would be really, really difficult to sell a big box national retailer a graphic that has a reference to cannabis or a pot leaf, now we actually have some of these retailers specifically asking for it,” he says. “An account like Bloomingdale’s, who used to shy away from that, is really coming specifically for those edgier graphics, and not just for markets where it’s been legalized. They’re really looking to bring cannabis culture directly to [consumers] because they’re getting people who are interested in it.”