If you have seen Black Lightning by now (which, I hope you have, since it’s been approximately like two weeks), you know that is has been THE TALK of the Blerd stratosphere (besides Black Panther) since it came out. And for good reason too, since its debut numbers were the highest of any CW show in two years and its second week held strong to 1.9 million viewers.

It’s been an interesting ride for sure. There are things that I love and hate about Black Lightning and I certainly hope to elaborate on those later.

There is one thingor rather one person–that I adore when it comes to the show.

And her name is Anissa Pierce.

Man. When I first heard that Anissa Pierce, daughter of Jefferson Pierce (Black Lightning), medical student, activist, a health volunteer, and the soon-to-be superhero known as Thunder, was gonna make her debut on Black Lightning, I admit that I was a weeeeee bit excited. I mean, it’s not every day that you get to see darkskinned (which I will soon elaborate on), queer Black women on your TV kicking ass and taking names in spandex. Especially when you yourself are a darkskinned queer Black femme.

Hell, it’s unheard of. Anissa would actually be the first. 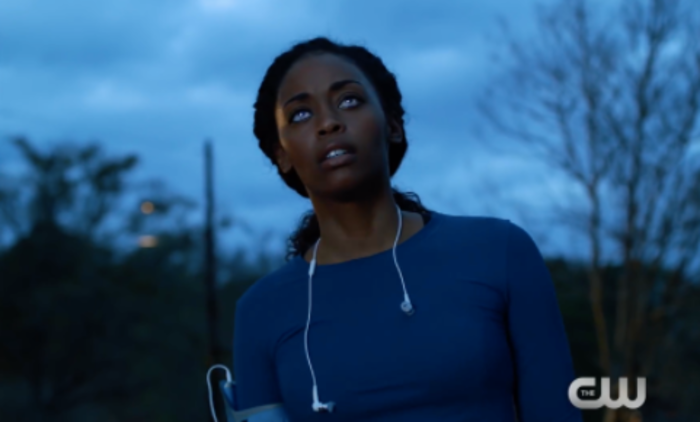 That said, after my initial excitement, I found that I was also preparing myself for impending disappointment in order to temper my expectations. Pessimistic? Maybe, but when you are a queer person of color, you tend to expect the queer representation on these type of shows to lack in some type of way.

I say this because 99% of the time, even if a character like Anissa is openly queer in canon, the adaption may be bold enough to leave it out all-together (which is erasure and which was famously lambasted in NBC’s Constantine) or it is extremely muted and almost suppress to the point that the only way you will recognize the character’s queerness is if the creators/producers/actors point it out explicitlyand this is usually not even in context of the show.

Which, you know, is not good.

This, fortunately enough, is not something that we see with Anissa. In fact, Mara Brock Akil and Salim Akil do right by queer Black girls everywhere by not only treating Anissa like a, GASP, real person but they also normalize her existence.

Now you may be wondering what I mean by that latter half of that sentence. And just in case you are, lemme just start with this: There’s no big red arrow anywhere pointing out how queer she is. She JUST is.

I think one of my biggest pet peeves about seeing queer characters introduced is the fact that most of the time, it goes so, so left. At its worse, a queer character will be introduced and all you will really know about them is that they are queer. Or said character gets a storyline but it, once again, focuses on how they are grappling with being queer or struggling to come out.

I am more forgiving of that latter trend, if only because coming out stories are extremely varied and one day I will talk about how the act of “coming out” is not really a luxury that queer and trans folx are afforded to begin with.

That said, it can get really aggravating when shows finally decide to feature a queer character but only focus on that part of their identity and don’t give anything to work with or any scenery to chew. It points out the fact that they were only inserted in the narrative for diversity’s sake or to check off some tick on a list.

And too my utmost surprise? Anissa does not fall into either trope. Sure, she is queer, but there aren’t any buzzers or bells or whistles or alarms that go off every time she comes on screen to announce “HEY, DON’T LOOK NOWANISSA THE BLACK QUEER CHARACTER IS ON SCREEN.” Nah, she just is. She exists. And it’s normal. And it’s awesome.

Perhaps the greatest example of this is when the audience “finds out” about Anissa. There are two instances of this. Her parents make a passing reference of it by mentioning her “being at her girlfriend’s house” (AND THEY DON’T MAKE A BIG DEAL OF IT) in an early episode and specifically in episode two, we SEE HER IN BED with said girlfriend, Chenoa, post-coitus and talking about a wide range of things, including Anissa’s mental health and where their relationship is headed.

Which, again, is all normal shit!

And even with the mental health mention, there isn’t any internal struggle going on that focuses on her sexuality. Nah, in fact, the only thing she is struggling with currently is the PTSD that stems from having been kidnapped by the notorious 100 gang and the onset (and symptoms) of her impending powers.

Dassit. And that shouldn’t remarkable but it is, particularly for a queer Black femme character.

But wait! There’s still one more thing that makes Anissa awesome: She expands the representation that queer Black lesbians are usually afforded by being femme-presenting.

Whew. This is a big one for sure.

While Anissa being a queer Black woman on a popular show is radical enough, the exceedingly radical parts of her character lie in what type of representation she is rendering and how she presents herself.

In short, I’m talking about Anissa being a darkskinned, femme-presenting lesbian/queer woman. 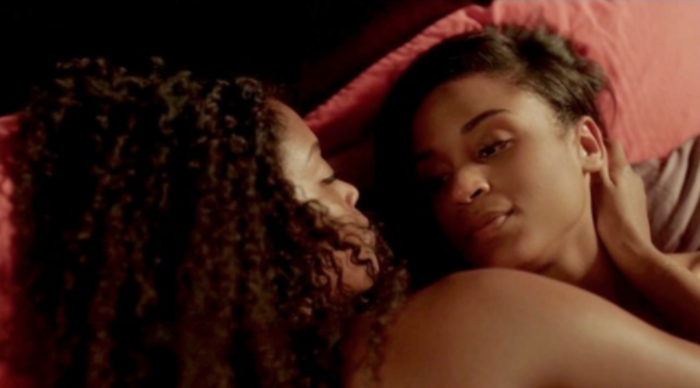 Some may not think it’s a big deal, but you’d most certainly be wrong for many reasons. The first being the standard representation for queer Black women usuallybut not alwaysdefaults to more masculine-presenting women or butch lesbians (Poussey Washington is a recent example that immediately comes to mind). And usually, especially in an interracial pairing, they will once again be portrayed as the more masculine presenting or the more “dominant” partner.

And if you combine this with tropes associated with skin color, by way of colorism (that is that darkskinned women are automatically hyper-masculine, less feminine, don’t fit expectations set up for more “acceptable women” and aren’t as “cute” as their lighter skinned counterparts) representation for darkskinned queer women get even dicier. Not to mention if you add transphobia into the mix.

Which is why Anissa is so damn great.

Not only does she avoid falling into the “dominating” partner trope by being in a relationship with a fellow queer Black woman, BUT her style and choice of dress separate her too. I mean, like, come on. The girl whoops a gangbanger’s in a white, ruffle neck blouse and hot pink heels.

It does not get more *femme* than that!

And you know what? This is only the beginning. Because as of right now? We’re only TWO episodes in. If you think Anissa is a poppin’ ass character now, then just imagine how much better and fleshed out her character and her storyline is gonna get as the season goes on. And just think, we get to love and adore Anissa this much because Mara and Salim simply decided to treat her like a regular, smegular person.

That’s all it took! Imagine that!

By them treating a queer Black woman like she’s normal and not some token, or anomaly, or benchmark to meet, they gave us a three dimensional character with hopes, dreams, and convictions, and, who I’d argue, has just as compelling a storyline as her father, the titular hero of the show.

And you know what? I hope other creativesespecially at the CWare paying attention. Because this is what can happen when you throw your diversity quotas in the trash and give a damn about marginalized people.