Gay Chilean-American director Sebastián Silva’s involving new movie Tyrel begins, like countless thrillers before it, with a broken-down car on a snowy country road. Two friends (Jason Mitchell and Christopher Abbott) are pushing it to their destination: A house in upstate New York, where they’ve planned a weekend with the bros. There is no character named Tyrel in Tyrel. Jason Mitchell, whom you’ll remember from Straight Outta Compton and Mudbound, is excellent as Tyler, the only black person joining this group of white liberal guys. (These chill bros are played by Abbott, Caleb Landry Jones, Michael Cera, and others.) Things go south pretty quickly. 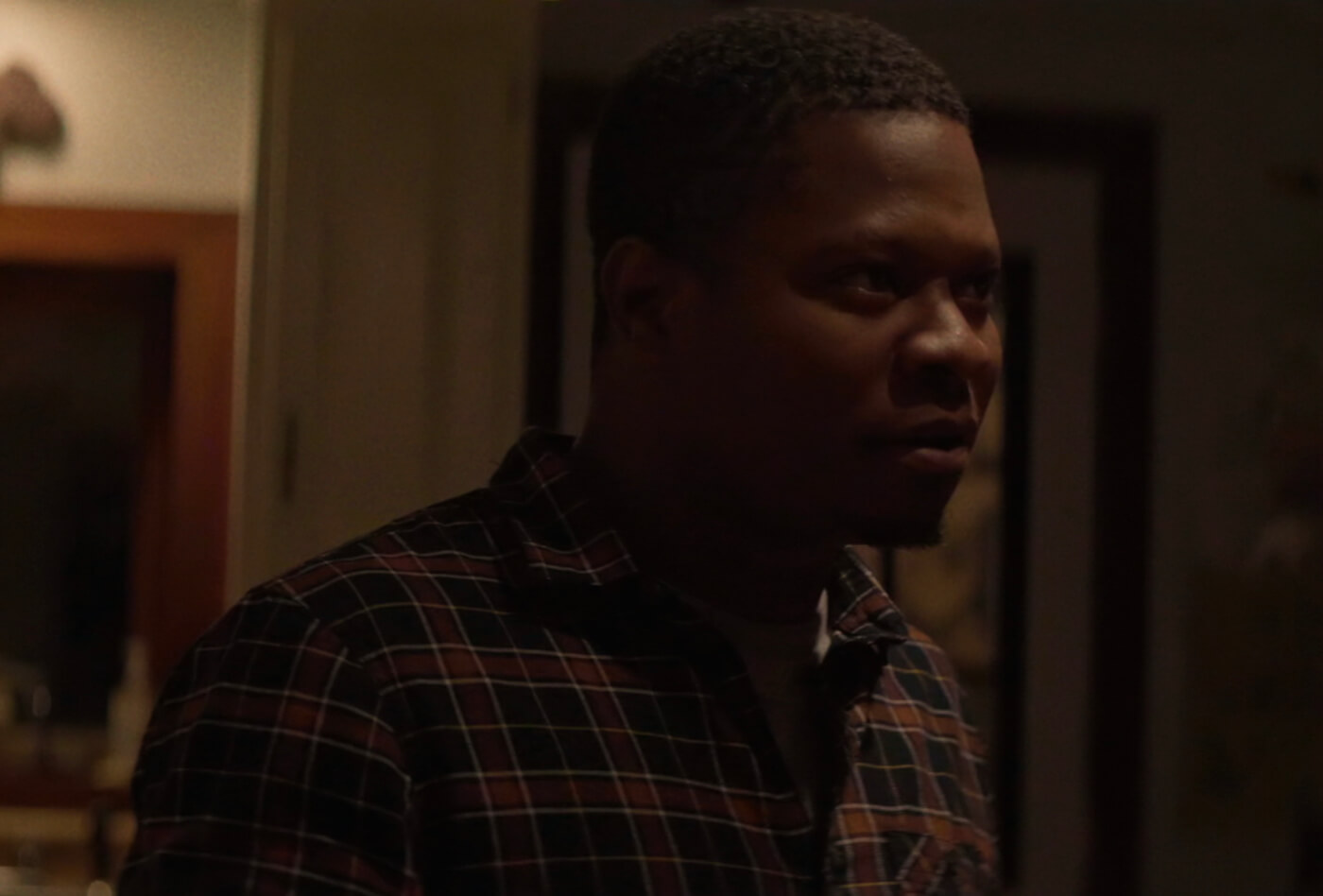 The title Tyrel comes from the first of many microaggressions Tyler confronts during the trip. The situation sends him down a spiral of anxiety and steers the movie in unexpected directions. Shot over eleven consecutive days and set to coincide with the Trump inauguration, Tyrel is a penetrating study of toxic masculinity, hipster racism, and white privilege, and it marks another provocation from a director whose previous movie, Nasty Baby, polarized festival audiences.

INTO: So, this movie came together really quickly after another project called “Captain Dad” fell apart. What happened there?

Sebastián Silva: The juicy gossip is that Will Ferrell pulled out at the last minute. He didn’t feel safe, I guess, with the producers and the location, which was Colombia, and the week before we started production he sent an e-mail saying he was out. We really tried to get somebody else while we were there, but it was hard. We had very little time to do it. So the whole production fell apart. I take those things with a grain of salt. I always try to see the positive. What is the lesson? Why did this happen? Maybe it wasn’t a great match. But then there was something about the making of “Captain Dad” that felt very industrialized. Agencies, and “How much is that actor worth?” and “Can this actor help you get two million?” Everything is very standardized and there’s something very not organic about that approach to storytelling and filmmaking, at least for me. I had written a more ambitious story and that’s what you gotta go through.

But then that sense of frustration in not having control gave me the drive to go and make something with my friends, and not care about the monetary values of actors, and more about their talent and their heart and their sensibility. And I was coming out with a story that wasn’t as personal as “Captain Dad” – which was a story about my family – but it nevertheless concerns me and everyone. It felt so right to not be doing “Captain Dad” but to be doing Tyrel. It felt very much like a life lesson. No resentment to Will Ferrell or the production – things happen for a reason. If I had made “Captain Dad” I probably would never have made Tyrel, and we wouldn’t be talking right now.

What was the timing like? How did the election and the inauguration play into it?

SS: “Captain Dad” fell apart in September and we tried until October. Then I came back to the states to try and figure out what was going to happen next. I went to Cuba with a friend, and that’s when I got inspired to make Tyrel. My friend Nico was a huge influence: “Just make it for nothing, man, and you can use my house upstate.” He pushed me to do things the way I had been doing them. I wrote the script within two weeks and I had an eighty-page draft of the story you saw. We put it together quickly and we were shooting by the end of January, for 11 days with no breaks. We were all staying in different areas in the Catskills. That experience was very fulfilling in every aspect.

The inauguration had just happened. It was all we could talk about. That was some devastating news right there. Michael Cera joked that we were making a period film. We embraced that and it gave us context. The movie is about a bunch of guys who are anti-Trump, white, liberal guys who stab a Trump piñata in its genitals, so it also breaks apart the cliche that forms of racism can only be found among right-winged people or white nationalist people. Tyler feels alienated and insulted at times, and these microaggressions are affecting him, because they’re coming from the obliviousness or ignorance of these white liberals, while we’re also hearing anger about Trump. We wanted Trump and the inauguration to be context, but we didn’t want to center it.

I think of your work as being in conversation with other movies, other independent movies. Nasty Baby came out after a few years when we were seeing all these small Brooklyn post-mumblecore movies about stuff like relationships and making it as an artist, and so it felt like this really subversive riff on that sub-genre. And the movie that comes up with Tyrel is always Get Out. What comes to mind when people ask you about that movie?

SS: I wasn’t too aware of Get Out when we were making the movie. I think the trailer might’ve been out, but it wasn’t clear enough what the movie was really about. The initial premise is pretty much the same, to be honest, and the fact that Caleb Landry Jones is playing a kind of antagonist in both of them doesn’t help to separate them. I love Get Out and I like that they are being compared, because they really are opposite films in a way. Tyrel is not a movie that gives you a conclusion of any kind.

But what was really interesting for me was that the audience sees all these indications of where the movie is going. Horror movies always start with a bunch of friends going to a house in the country, and then you have Ann Dowd in the first scene, and she always gets cast as this benevolent villain type, so you’re worried about Tyler when she shows up again. But what actually happens is way more interesting than what I was conditioned to anticipate.

SS: I don’t feel that I’m purposefully doing this kind of antagonistic film that uses the same elements in a more subversive way. For instance, I didn’t know Ann Dowd was typecast in the way you’re referring to. So it speaks to an irresponsibility on my part as an author that I don’t know the actual context of an actor. I’m not really in tune with more mainstream storytelling. It’s not something I watch or care for. It’s not like I felt like Nasty Baby is a subversive response to mumblecore movies. I don’t even watch mumblecore movies.

I feel that I do something that could be a little more Machiavellian just in planning it out in a way that will surprise the audience in an unexpected way. When he goes back to Ann Dowd’s house, and for the first time you see another black person in the movie, Reg E. Cathey, who plays her husband. And the guy kicks him out: “You gotta leave, man. You’re in my house, it’s super late, you’re drunk.” I feel like in that scene, I’m playing with a lot of expectations consciously. And not giving into doing a big payoff. The film never gets violent. There’s no villain, no bad guys, no victims. I’m playing with all those expectations because people are so used to that, especially when it comes to a movie about race.

There’s no threat to Tyler, but it’s impossible not to sense a threat, just because of the country we are in and the history that America carries. It can never be devoid of tension because that’s how things are. It’s hard not to think that he could be killed if he leaves the house, because he’s in upstate New York where there are KKK members and Trump supporters, and he’s drunk, and he’s alone, and he’s vulnerable. Of course you’re going to think something’s going to happen. But nothing that you expect to happen happens. That’s the level of surprise I use more.

Nasty Baby was more of an evil experiment. It’s talking about the guilt of the privileged, and it also fucks with that audience. I feel like Tyrel is more earnest. Tyrel is definitely about defying prejudices and stereotypes and your social conditioning, but I’ve noticed the people that suffer the most dread, the ones expecting the worst, are the ones who love the story.

I’m glad you’re talking about identity and social conditioning and how it affects a person’s reaction to the movie, because I’ve noticed that you kind of push back when people call you a gay filmmaker or an immigrant filmmaker or a Latino filmmaker. So we can speculate on how the identity of the audience will affect their reaction to Tyrel, but I’m curious about how your identity plays into the creation of the movie. Because a lot of people are gonna ask why you’re making this movie.

SS: Right. “Why are you making this movie?” Yeah, there are many answers to that. The first one would be that the movie is ultimately about alienation. Alienation has been my subject. I’ve made eight features, and alienation has been extremely present in at least five of them. It is something I want to get into because it feels so complex. People can get really trapped inside themselves.

The second answer is that I knew I was walking into tricky territory. I am making a movie about a Black guy, so I can be accused of appropriation, or of being some kind of imposter for not having the Black experience but portraying one. I’m extremely aware of that risk of being tone-deaf. So I just sought help. From other colleagues, filmmakers, writers. Black and white, but all Americans. It’s not just that I’m not Black. I’m not American, and this is very much an American conflict, particularly so. I got really good advice and learned where I had been a little lost in cultural terms. Then I learned that not everyone carries the same opinions. Some Black folks would be clear and say, “Tyler would never say that.” And then another Black guy would say, “Yeah, he would say that. I would say that.” And then you’re like, “Oh shit.” It’s up to me and Jason Mitchell to figure it out.

And then I realized I was being stereotypical by thinking that I could find my character by asking Black folks about how Black men would act. And of course, there’s not only one Black man. Personally, I was very clear about what was going to be Tyler’s emotional journey, and I had to be guided in terms of cultural and social context. And I was working with very smart people: Jason Mitchell, and Darius Clark Monroe, my assistant director. The set was pretty mixed.

You need guidance. You cannot risk being tone-deaf. It’s a stupid risk to take and it’s not that difficult. I would never blame or shame anyone who wants to make a movie about a gay Chilean. I just hope it would feel real. And if it doesn’t, then you just make fun of it, I guess. It takes responsibility not to fuck it up and just be smart about it. There’s a lot of smart people out there who are willing to share their stories. But I’m completely willing to take any criticism. If I did something that a lot of people agree is tone-deaf and wrong, I want to know what it is, so I can become a wiser person.