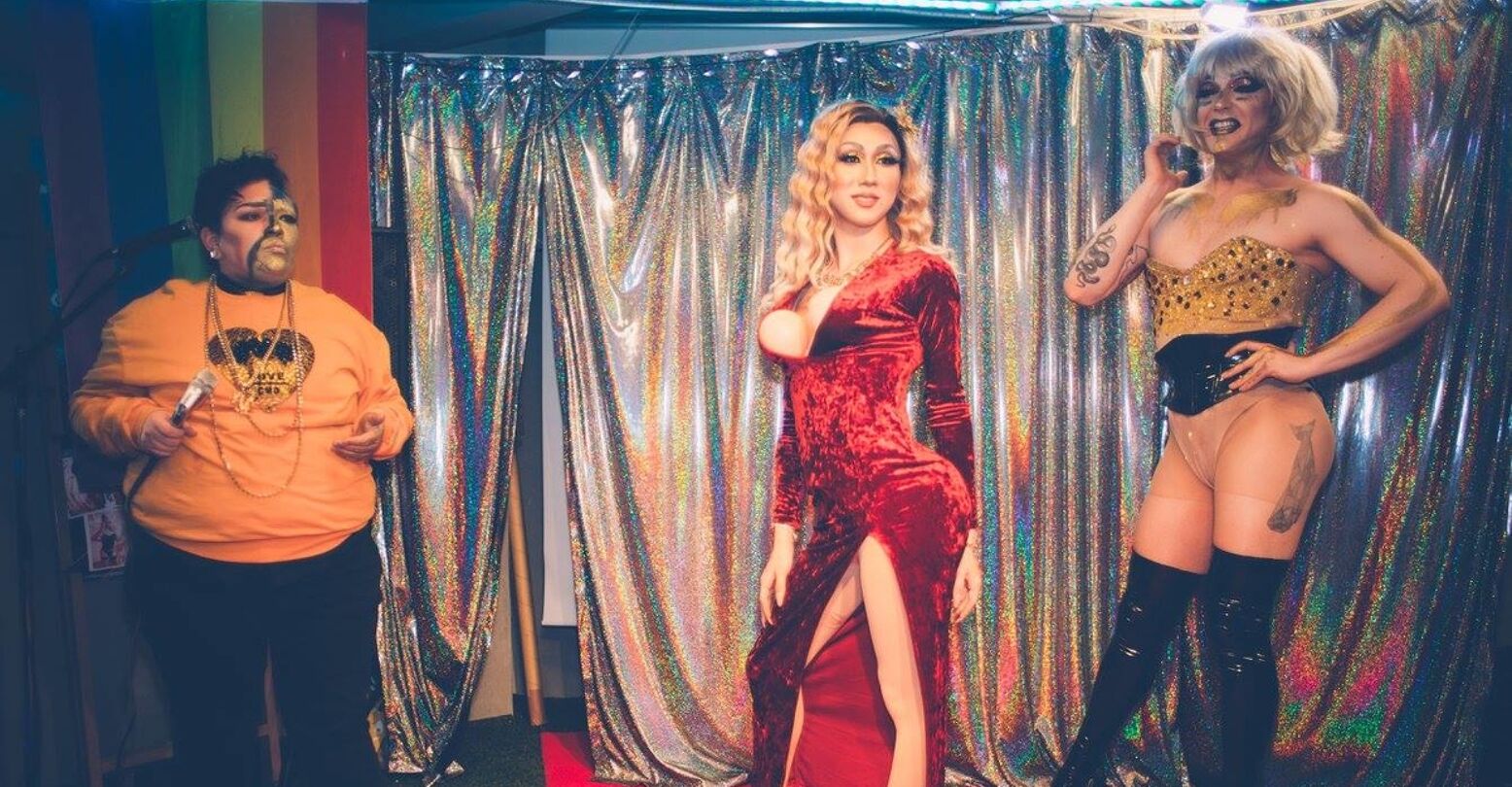 RuPaul’s Drag Race has had international impact, most notably bringing visibility to the art of drag in parts of the world where queer self-expression has existedin the shadows. One such place is Seoul, South Korea.

There has been a drag community in Seoul for decades, mainly at Trance, a nightclub in the city’s international district of Itaewon. Some of the resident queens there are in their forties and fifties, but younger queens are coming in to make theirdebuts.

Paul Perrone made his own debutas the sharply-contoured and sharper-tongued Tina Gina Tiramisu on Halloween 2016, a year after moving back to Korea from the States. His drag style usually includes a long dark wig and impressive black cat-eye eyeliner.

Perrone says the inspiration came from “just being around [drag] so much and watching RuPaul’s Drag Race.” He says when Drag Race “skyrocketed into the ‘mainstream’” a few years ago, the drag scene in Seoul also took off.

“The drag scene hardly existed in Seoul in 2013, but now there are so many bars and clubs that host drag events regularly,” Yang says.“I see more and more Koreans trying drag nowadays. Almost every week, there are new drag performers.”

But even though the drag scene is growing quickly, Korean society is slow to accept the art and community of drag. The country has a long history of homophobia and, despite promoting a national image of a modernized global player, is still very socially conservative. About a third of the population is Christian, but the culture is also steeped in Buddhist and Confucian traditions. The annual queer pride festival in Seoul has always drawn protesters, usually from conservative Christian groups, and during the Korean presidential debates in April 2017, then-candidate Moon Jae-in said he did not support LGBTQ rights. Moon is now the president of South Korea.

There’s also a generational divide. Older people tend to be more conservative, having lived mainly under right-wing dictators. As a result, younger generations tend to pick up misinformation, even if they’re generally open to learning more about queer culture.

“Working with children, I’m often confronted with a lot of regurgitated opinions,” says Perrone, a school teacher who is not out to his students. “I hear some anti-gay jokes, and a lot of them don’t even understand what it means.”

Perrone is otherwise out, though, and in Korea, he says, the most common reactions he gets are either indifference or a flood of well-intentioned but ignorant questions. His sexuality once made another Korean man so uncomfortable that the man changed seats.

It’s taboo for men to be queer in Korea, yet it is highly popular for men of any identity to partake in the cosmetics industry, something that Western straight men wouldn’t go near. Much of this is influenced by Korea’s most successful export:K-pop.

K-pop (or Korean pop music) is a world unto itself. K-pop stars (or “idols”) areare young, lithe, and beautiful with fans all over the world. They are known for catchy songs, killer dance moves, and edgy makeup looksand it’s not just the women. Male K-pop stars always sport at least flawless skin and eyeliner.

K-pop’s spectacular rise in popularity, known in Korea as the “hallyu wave,” sparked a matching rise in popularity for men’s skincare. South Korea has one of the largest male cosmetics industries in the world, with Korean men making up one-fifth of global men’s skincare sales, according to the international market research firm Euromonitor. From 2009 to 2014, the Korean male beauty and skincare industry almost doubled in size. It was no longer only K-pop stars who were wearing makeupmen would wear makeup in their everyday life, even if it were just tinted moisturizer to even out their complexion. 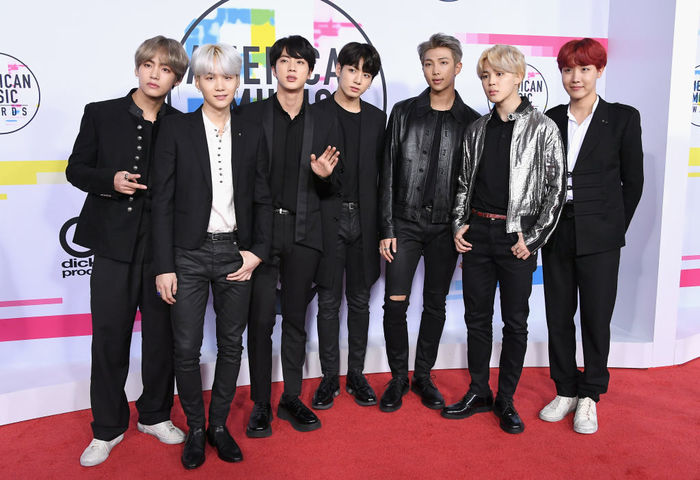 Not to mention the fact that Korea is the largest market for plastic surgery, and has been since 2009. South Korea sees the most surgeries per capita per year in the world. On average, there are about 20 procedures per 1,000 people in Korea. The most popular procedures are eyelid and nose surgeries, most often to make people look more Western.

The popularity of cosmetics and plastic surgery means that K-pop idols of all genders look largely the same. The standard makeup look is the same for everyone: big eyes, clear, dewy skin, and full, natural lips. Some idols will embellish this with heavy eye makeup, but the base is always the same. The goal is to look as youthful as possible.

K-pop’s popularity, and the open support and promotion it has in society, stand in sharp contrast with the general reaction to the drag and queer communities. On paper, it sounds like male K-pop stars and drag queens are fundamentally the same: they’re both groups of men who put on makeup, get on stage, and sing and dance for crowds.

But even with K-pop encouraging what appear to be new, edgy trends, there is a certain level of homogeneity across pop culture. Drag queens stand out by design. Their makeup is heavily contoured and dripping with glitter. It looks nothing like the styles that Korean men or even women typically wear. And drag queens in Seoul, like in the States, are usually gay men.

“Many times, when I meet a Korean person and I tell them I’m not straight, I’m often the only out person they’ve ever encountered,” Perrone says. “Living here as a foreigner affords me certain privileges in terms of my personal life and independence that Korean queer folks aren’t given, due to the presence of their family and the hierarchical culture.”

Asian family culture is very close-knit and follows a fairly strict hierarchy. The added influence of religion means that non-straight Koreans are often encouraged to keep their sexuality under wraps.

Most gay Koreans still don’t feel safe actually coming out. “There’s a Confucian, collectivist componentyour image directly influences your family’s image, so others knowing you were queer or a drag queen would have an impact on how your family was seen,” said Justin An, 21, a drag performer and senior at Tufts University.

Gay Koreans will go so far as to get married and have kids, because they know that if they come out, their parents will disown them. Tied to this is also the problem of the country’s patriarchal history and traditional gender roles. “There’s a lot of talk about ‘men need to do this, you’re a man so you need to be the breadwinner,’” An said. “My sister just got married, and the things she got told to do as a wife were so outdated.”

When he’s in Korea, An says he does feel safer behaving in a way that would typically be considered more “feminine,” something the popularity of K-pop affords him. He doesn’t have to worry about being outed as queer, because no one in Korea questions his sexuality. It’s similar to how American men in the ’70s would wear short shorts and feathered hair, things that are completely contradictory to stereotypical masculine aesthetics today. Everyone assumed they were straight, so they could look trendy instead of “manly.”

“Aesthetics are separate from sexuality, because sexuality as a topic doesn’t come up in conversation here,” said Eric Shin, who performs as Erica Balenciaga in Seoul. Balenciaga, 21, has been a drag queen for two years, debuting while at college at NYU Shanghai.

Now back in Korea, he also teaches English to younger students. When working, he’s open with his students about wearing makeup to work, though it’s usually just tinted moisturizer. But his students always ask why he doesn’t have a girlfriend. “The option that I’m attracted to males is completely beyond their perception,” he said.

Men are still expected to fill the traditional roles of breadwinner, protector, and carrier of the family line. This comes through specifically in military service. Korea has a mandatory military conscription. All Korean-born males over 18 are required to serve, either through active service or civil service. All men must undergo thorough physical and mental checkups in order to determine which service track they will follow.

It’s actually during their military service that most Korean men begin using skincare products. There are camouflage paint kits or moisturizers that are specifically marketed to soldiers. These products are supposedly better for their skin. But the military also has some of the most blatant homophobia issues. With no anti-discrimination laws or systems in the country, acts of prejudice run rampant.

“I did the one-month army training, with guns and everything,” Yang says. Due to anxiety and depression issues, he was assigned to civil service. During his training, he came out to his supervisors. “They were pretty supportive of me and very caring, and they tried hard to keep me safe from other people and kept it as a secret,” he says. “I was lucky.”

There’s a weird identity split in Korea: the need to look glamorous and just feminine enough to be trendy, but not actually be “feminine.” K-pop breaks with traditional conventions of masculinity, celebrating men who wear makeup and have a slighter, more delicate build. But its popularity means that it’s also the limit. It’s only up to this point which Korean society can tolerate androgyny in men. 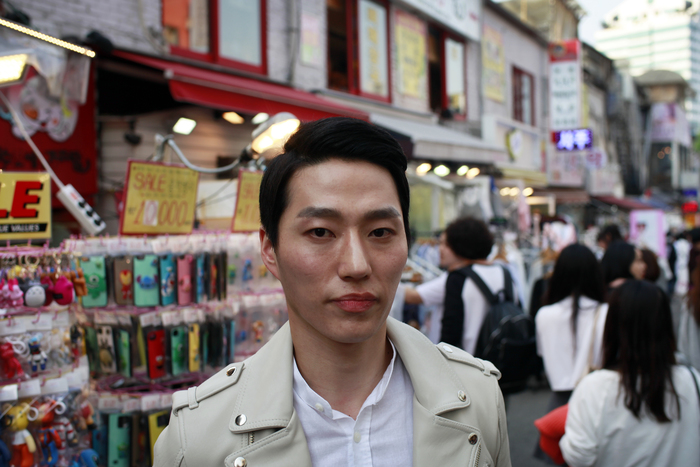 Drag queens continue to break the barrier. They are, as Shin puts it, “extra.” Erica Balenciaga shows a preference for bold lipstick, pastel-colored wigs, and false eyelashes so huge they look like bird feathers. And it cost him: Shin was born into a family of Jehovah’s Witnesses. After coming out as gay, his family pressured him to keep it a secret. When he debuted as a drag queen, he was disfellowshippedkicked out of the church. His family cut off contact with him for a few years, though they have since reconnected.

Progress is being made with a new younger generation. College-age Koreans are mostly open to learning about and accepting queer and drag culture. Most of the crowds that Shin sees at shows are students, or people interested in art. Society is making room for drag culture, despite Korea as a country being slow to change.

“I love Korea. It’s become like home to me,” Perrone says. “I honestly prefer living here to living in America most days. But a lot needs to change.” For Perrone, his status as a white foreigner protects him. His family isn’t in Korea, and Korean people hold him to different standards than locals. He’s afforded more room and flexibility in society, meaning he can experiment in the drag world with no repercussions.

But a lot of Koreans don’t have that luxury. “Here, there’s way too much at risk,” said Balenciaga, “and you can’t trust anyone.”