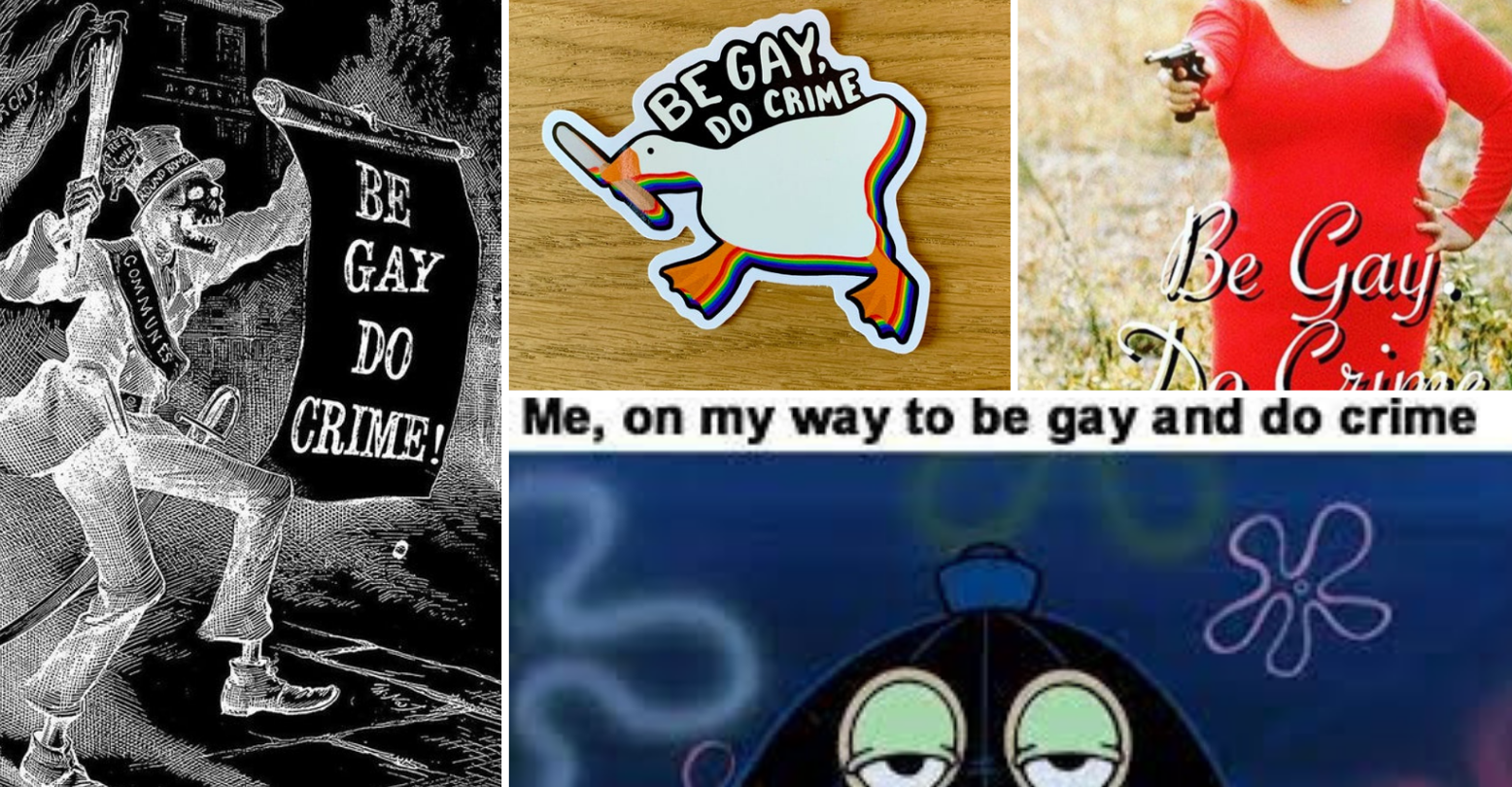 Depending on who you follow, take a glance at your Twitter feed this pride month, and some version of this tweet is sure to come up:

Ah, yes: “Be Gay, Do Crimes,” the rallying cry of a generation. But how did this slogan (and sentiment) come to be? The history is weirder (and shorter!) than you might expect.

In September of 2016, Instagram user @absentobject posted a photo of some graffiti they’d seen in France. No sooner had they uploaded it to Tumblr than it was “all over the Internet” thanks to the @queergraffiti account.

It’s not hard to see why: in 2016, Instagram was still on the ascendant, and Tumblr was still enjoying something of a golden age for queer creators. The photo took off, and the slogan—simple, compact, elegant—became a rallying cry for queers who were done being commodified by rainbow capitalism.

The photo surfaced a few months after the tragic Pulse Nightclub shooting, a moment during which queer folks began to demand more from brands than meaningless rainbows and “thoughts and prayers” posts.

Two years later, the photo resurfaced, this time on Twitter.

This is the first instance of “Be Gay, Do Crimes” being tied to a specific ideology. The anarchism of the original statement, in 2018, took on a leftist bent.

Soon after, another Twitter user (@isislovecruft) told a story about two kids jumping  the BART turnstyle and shouting “be gay, do crimes.”

This call-and-answer format represents the subtle but important change in queer online discourse from 2016 to 2018. While 2016’s “be gay, do crimes” was enough of a statement in and of itself to ride on shock value, 2018’s “Stonewall was a riot” represents a new desire to reclaim queer narratives. Where generations before had fought to not be seen as criminals, deviants, or threats to the nation, queer kids were now proudly embracing all the ways in which their identities gleefully transgressed the law. The era of apology, it seemed to say, is over. Or: “Get in, losers, we’re going tagging.”

It’s no coincidence that all this happened on Pride Month. When trans artist @bum_lung posted the iconic skeleton design, it was a mere two days before @isislovecruft tweeted about the turnstyle incident. It was as if the entire culture was united: gay is good, and crime is part of that. However petty or inconsequential.

For decades in this country, being queer was a crime. Merely existing with queer desire was transgressive enough to land you in jail. Wearing more than one article of clothing meant for the opposite sex was also more than enough to land you in the clink, and likely abused (physically and sexually) by police. And after decades of respectability politics and apologies, a new generation of queer kids decided to flip the script. Being gay has always involved doing crimes: it’s a sad, but crucial part of our history.

So yes, I think we can safely say that the kids are, and remain, alright.