Vanessa Torres was born in 1986 and became a professional skateboarder at age 14. An immensely talented, stylish athlete, she was one of the first women to make a dent in the male-dominated world of street skating, alongside Elissa Steamer and, later, Alexis Sablone. She is also a universal inspiration to a growing generation of younger women skateboarders. Initially sponsored by the renowned company Element, Torres eventually moved to Meow Skateboards, a smaller, all-women outfit that allows her greater creative control.

Torres is also one of the most outspoken gay skateboarders active in the sport today. At one contest, she showed up wearing a “gay rights” T-shirt a friend designed–a bold move in a sport that still clings to its heteronormative side. When I showed a picture of Torres sliding down a large downhill ledge in pajama bottoms and a hot-pink sports bra to a girlfriend of mine, my friend echoed the apocryphal line about James Bond: “I don’t want to be with her, I want to be her.”

INTO reached Torres by phone on her patio in Long Beach, California.

Is there a large lesbian community in women’s skateboarding?

I feel like the majority of my inner circle are lesbians, or identify as non-binary or queer. I know a lot of straight people too. [laughs] Skateboarding always brings people together, no matter your preferences. I’ve been really fortunate to grow a crew.

Growing up, I skated with a lot of dudes, until I got sponsored [by Element] and started traveling and was able to meet other women who skated. When I was young being queer wasn’t talked about as much. Now it’s like, queer is trending, you know what I mean? Which can be annoying, but in skateboarding it’s rad. Right now skateboarding is super queer, and I love it.

Has that changed in the course of your career?

Yeah, it’s gotten more inclusive. Obviously there are many hardships that still lie within skateboarding. I’ve been dating my partner for over a year now, and it’s wild the way she sees the world. I see it in the same way, but I never thought about so many things, especially in skateboarding.

Traveling with dudes, I got so accustomed to a certain energy. There’s this constant banter that everyone has to uphold that can be misogynistic and objectifying. I’m not saying I contributed to the conversation, but I was outside it looking in, really close to it, and they were obviously comfortable with that. Now, being 32 and looking back, I’m like, “Holy shit.” I don’t want to be like, all cis men, I don’t want to point the finger, but in my own experience, more often than not, those are the people that are having these conversations without any regard for how damaging and harmful they can be.

Anyway, there are so many things going on right now in queer skateboarding, so many events and gatherings. Queer people are doing so much for skateboarding, reinforcing safe spaces, community, support and inclusivity. I’ve been getting more involved with that as well, because the energy feels right for me in those spaces, with my people. 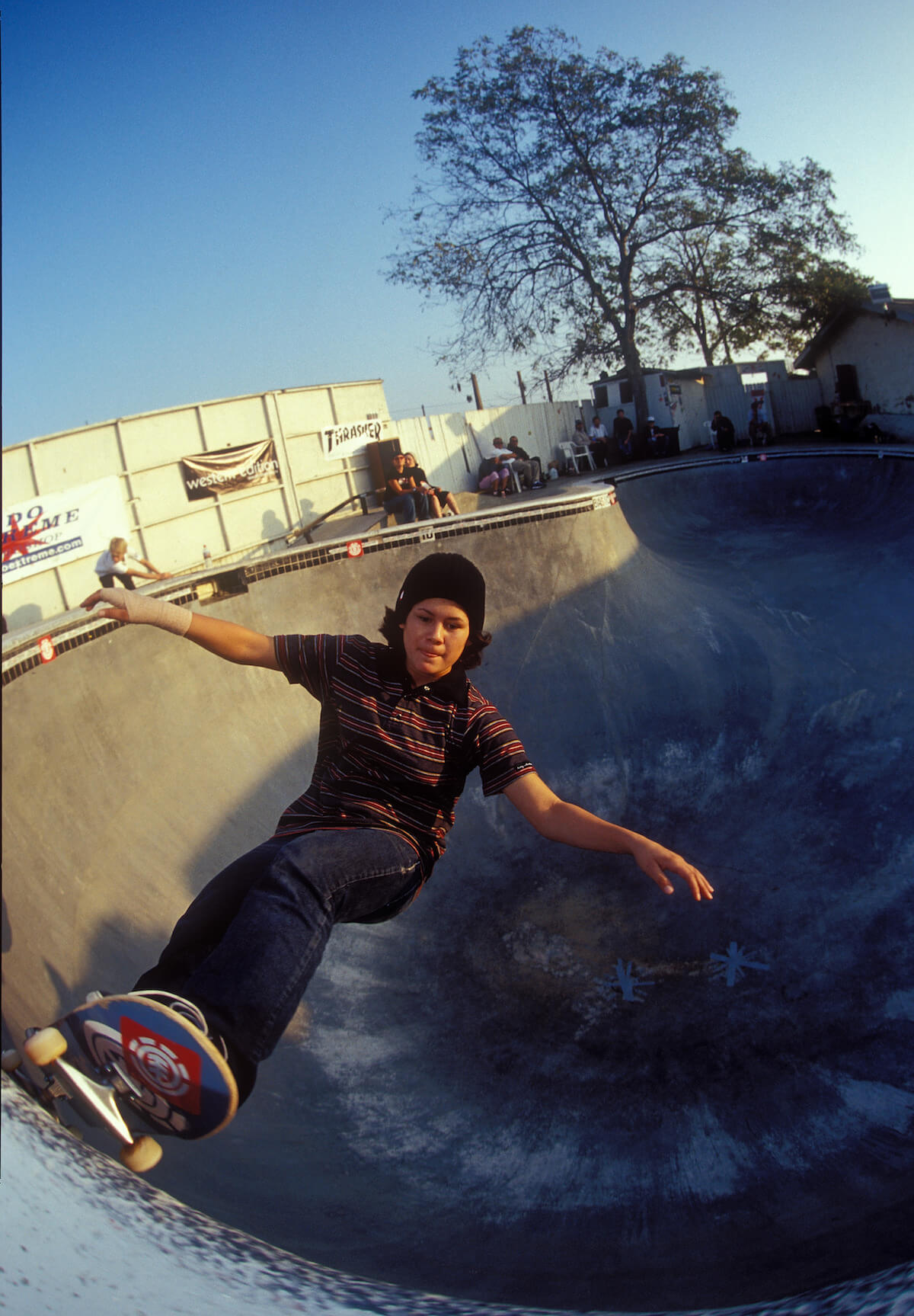 In many skate videos, especially older ones, there’s the trope of the security-guard altercation. There’s a lot less of that in the all-women skate video Quit Your Day Job, where you have a part.

Right, it’s like [the guys] are upholding something: “Fuck the system.” I was obviously on all the sessions for Quit Your Day Job. I think honestly we just got lucky. Also, when you get older, you want to avoid citations, so if a cop tells you to go, you probably go. I can’t afford that shit. [laughs]

I think we’re all still rebellious, we’re just trying to be a little smarter about it these days. I’m not a minor anymore. I remember getting cited when I was a teenager for skating a school, and I was so scared and freaked out. There was such a crazy strong stigma around the presence of a cop. I just started crying.

Tom of Finland has a skateboarding collection, and while it’s a small thing, skateboarding gear that’s pretty sexual and geared toward gay men is definitely out there. Does the same thing exist for women?

Do you mean the same concept but by women, for women?

That would be fucking rad. I don’t think it’s going to be long before something like that does come out, to be honest. Everything is constantly evolving, and people are expressing themselves a lot more within skateboarding.

Maybe I’ll do it. Or maybe I know somebody who could carry the torch, and I could play some role.

I was watching Nyjah Houston’s Nike SB part the other day. But Quit Your Day Job gets me so much more excited to go skate, because it’s not just an endless succession of huge stairs and handrails.

Yeah. It offers a variety of different styles of skating. Everyone’s having fun. I think you feel that what we filmed is authentic. Grab your crew, go skate, make friends.

The more creative and authentic something presents itself to be, the more pumped I’m going to get off of it, because I relate more to it. Watching Nyja is like, Mmmmh. He’s really fucking good. But that just doesn’t get me off. 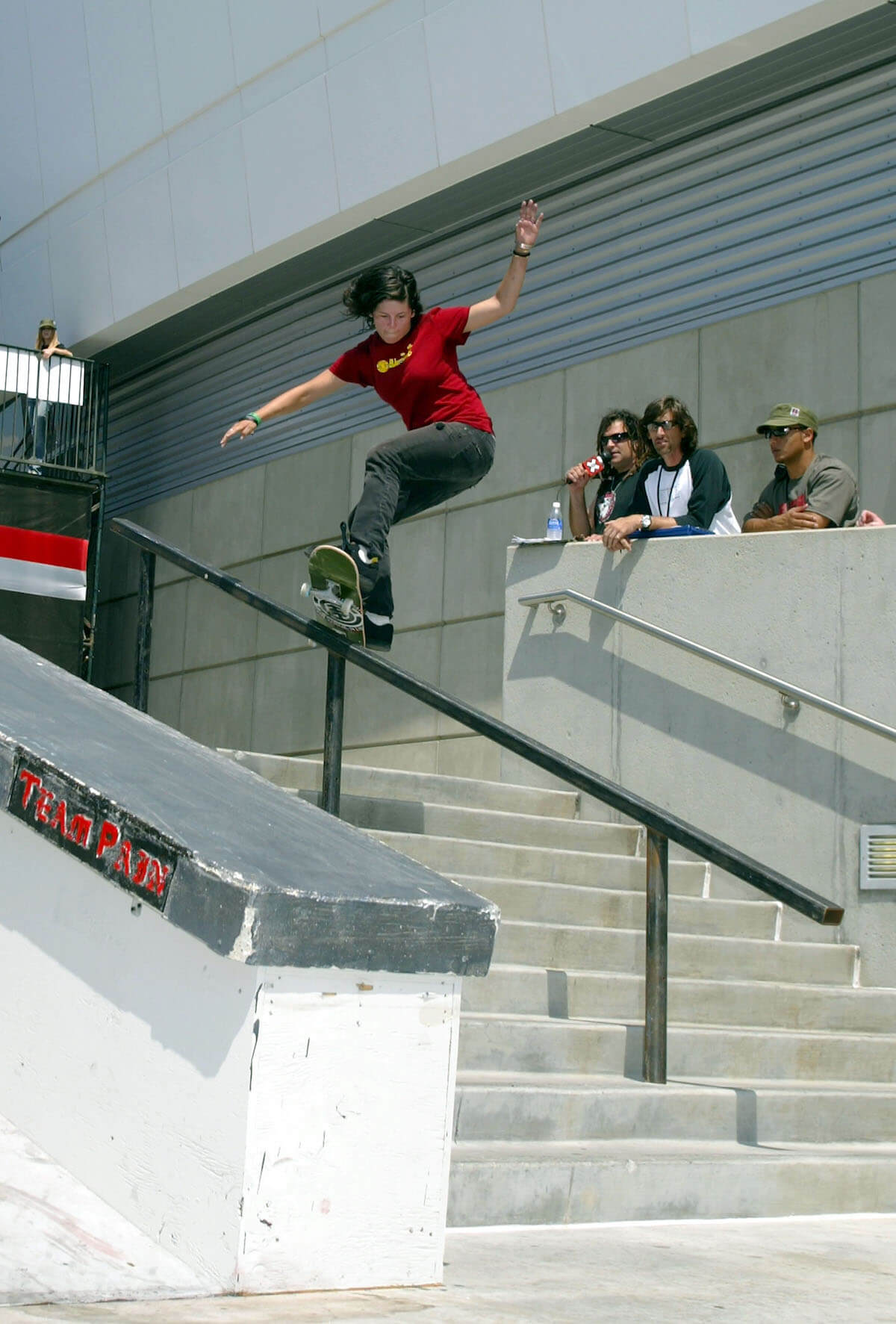 In an interview with Transworld, Lacey Baker said that while men often have the option of not skating contests, because they can survive from money from their sponsors, women never had that choice. Would you skate contests if you didn’t have to financially?

From, say, age 14 to 17, contests were really fun for me. I was experiencing that atmosphere for the first time. I was a kid who just wanted to skate. It was good meeting people and being able to go to new places. Also, I skated Street League in 2015, and had a lot of fun. Even more so because I was recently sober, and I had all this energy and was experiencing things really clearly.

But at the end of my twenties, I started having a lot more emotion toward skating contests. Like: “God, I fucking hate this.” I literally felt like I was going to fucking throw up. I’ve been skating contests for so long, but the feeling that I get has never changed. I drop in, I black out, and it’s over, and hopefully I did well. I know I’m not just speaking for myself: a lot is riding on it. There were a lot of contests in the last couple years I skated for financial reasons. I did enjoy myself a little bit, but it was more stress than actually having a good time. Associating that with skating didn’t feel right to me. I don’t want to dislike something that brings me pure happiness. I’ll occasionally skate a contest if it’s some independent thing where the skateboarding is genuine. And where you don’t have huge-ass cameras in your face.

I mean, it’s really great if you have sponsors that offer you a travel budget, and a lot more of that is happening now. I’m just going to say it: I think it’s Olympic related. They’re picking up really amazing women who fucking rip and deserve it, but it’s a little bittersweet in my opinion that because the Olympics are happening now, they’re “woke.”

I’m also just not a competitive person. I know what it takes to podium, which is where you want to be because that’s where the money is, and I’m like, “I don’t want to do that shit to my body anymore.” Mariah [Duran], Lacey [Baker], Jenn Soto—y’all have fun.

You mentioned getting sober. Why do you think alcoholism and drug addiction are so prevalent in skateboarding?

My own personal experience is that it was very normalized. I’m sure it’s like being a punk rocker—the bad kids club, you know? But being around Mariah and Jenn and the younger girls, they’re approaching life and health so differently. They do physical therapy and go to the gym. You get up early and go for a run? That’s really fucking rad.

I feel like I played a part by fucking up and being a pile of shit for so long, and then getting my shit together. Also, it’s rough to party for a really long time at a certain level. After 25 it’s just not cute. “You’re an adult hot fucking mess”—that was me. 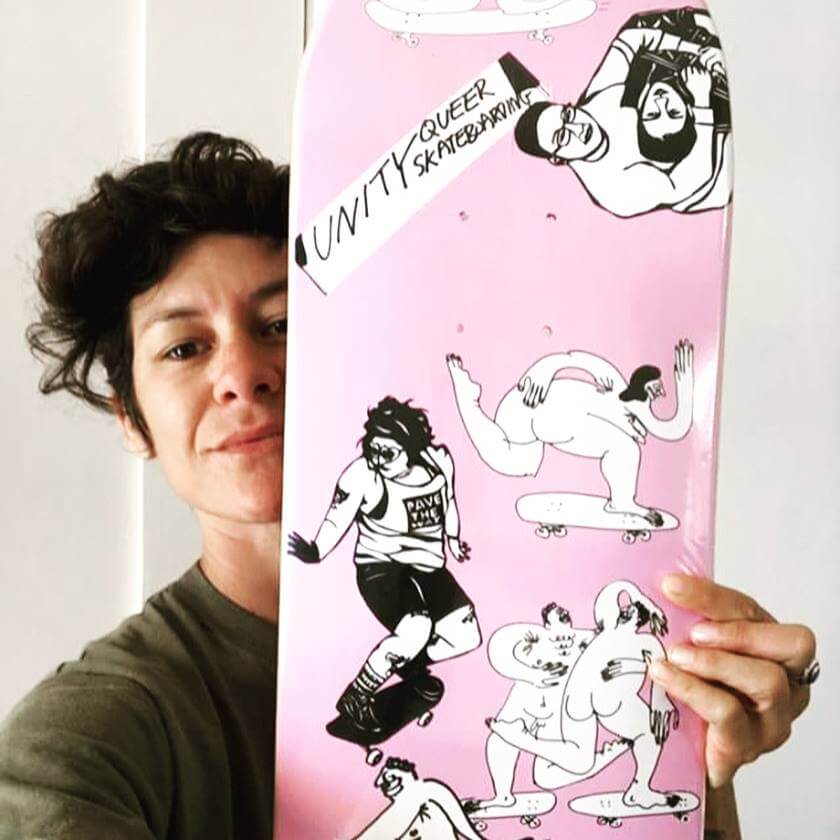 Obviously, past age 30, a lot of things in skateboarding get harder. Has anything gotten easier for you?

I’ve brought down the level of pressure that I put on myself. I moved to Long Beach from LA, and I love it here. Cherry Park is nearby, and there’s a ditch spot super close to the water, which is rad to skate at sunset. I’ve actually learned a couple tricks in the last year. Apparently, learning new tricks is still a thing in your thirties? And that’s the shit that motivates me—that excitement of what it felt like to land your first kickflip.

You can extend the lifespan of your skating by taking care of yourself. I need to start doing yoga, but I do go to physical therapy, because I had surgery on my knee a couple years ago, and it still hurts every day. As a skateboarder, you think you have this amazing balance, but try going to a physical therapist and doing balancing exercises. You’re like, “I’m a hot mess, I can’t even.” It’s crazy. I skate better than I can walk.

This interview has been condensed and edited