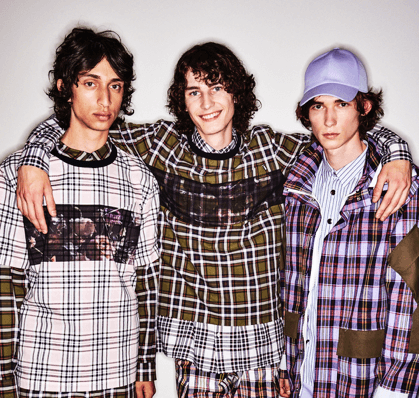 With the European men’s fashion week shows done and dusted and New York just around the corner (July 10th to be exact), we’ve scoured the runways and pulled together a list of the hottest Spring 2018 trends. Don’t worry, we’ve got you covered.

The rise of the savvy Millennial shopper has given birth to a whole new market that craves street style looks and skater brands. They love limited editions, authenticity and collaborations—remember that Louis Vuitton/Palace collab? Love it or hate it, the gap between high-end and the skate park is quickly closing as more fashion houses jump on the youth market band wagon and create hard-to-get pieces that have shoppers lining up around the block.

Printed stripes are something that we see on the runway every season and Spring ’18 is no exception, except this time things seemed a little fresher. Head-to-toe stripes come through in Sunnei’s matching trucker jacket and combat short combos that boast bright tones of green and yellow with black and white, while MSGM gives a nod to ‘90’s grunge with checked skater shorts and sloppy sweaters that give a great clashing print feel while remaining easy to wear due to its tonal color palette. Think Kurt Cobain but more polished.

Meanwhile, Prada went for a more elevated look with high-waisted trousers and layered cardigan/knitted tee pairings that give a new take on the twin set. 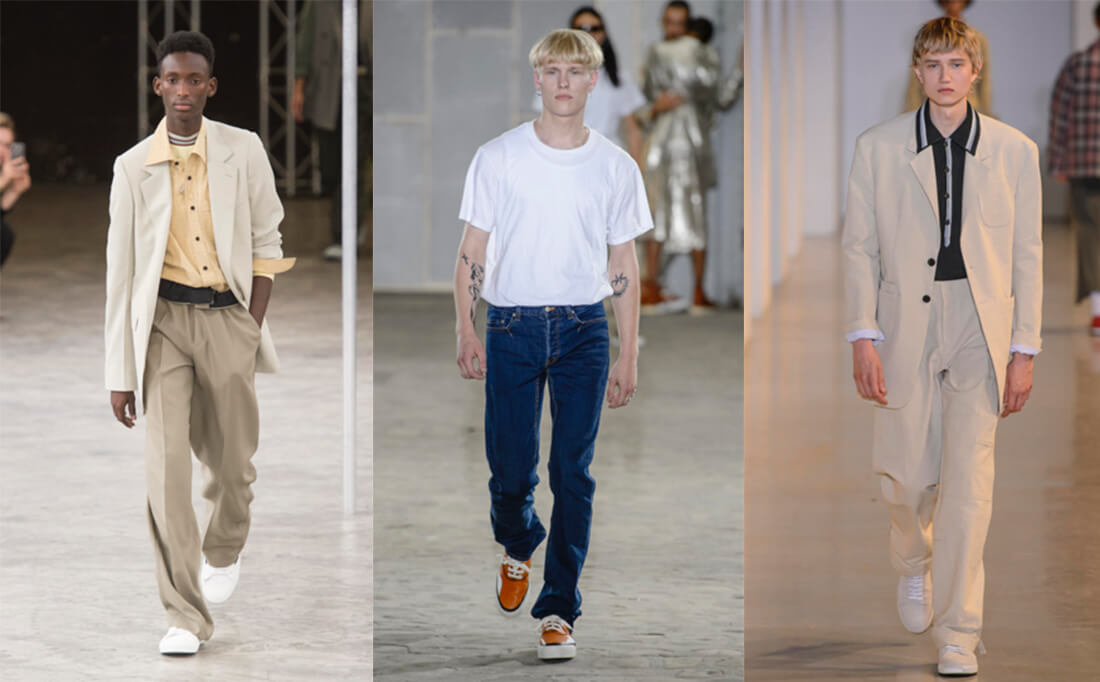 Comfort dressing hits through the Spring ’18 season with a full swing. Slouched, relaxed tailored trousers suggest an end to the skinny pant with looks becoming much more laid back. Oversized jackets give an almost Miami Vice feel, but thankfully seem much cooler than the original version. The rise of skater styling creeps into tailored looks with slip-on sneakers, boxy shirts and polo tee’s helping to make “dad dressing” youthful.

The fast fashion market has been on the decline for a couple of seasons with many brands opting to focus on classic wardrobe staples that last season after season, and Julien David’s show harped back to those classic ‘90s looks that were eternalized by brands like Calvin Klein. Simple white tee’s with straight cut classic jeans give us the perfect nostalgic feeling. 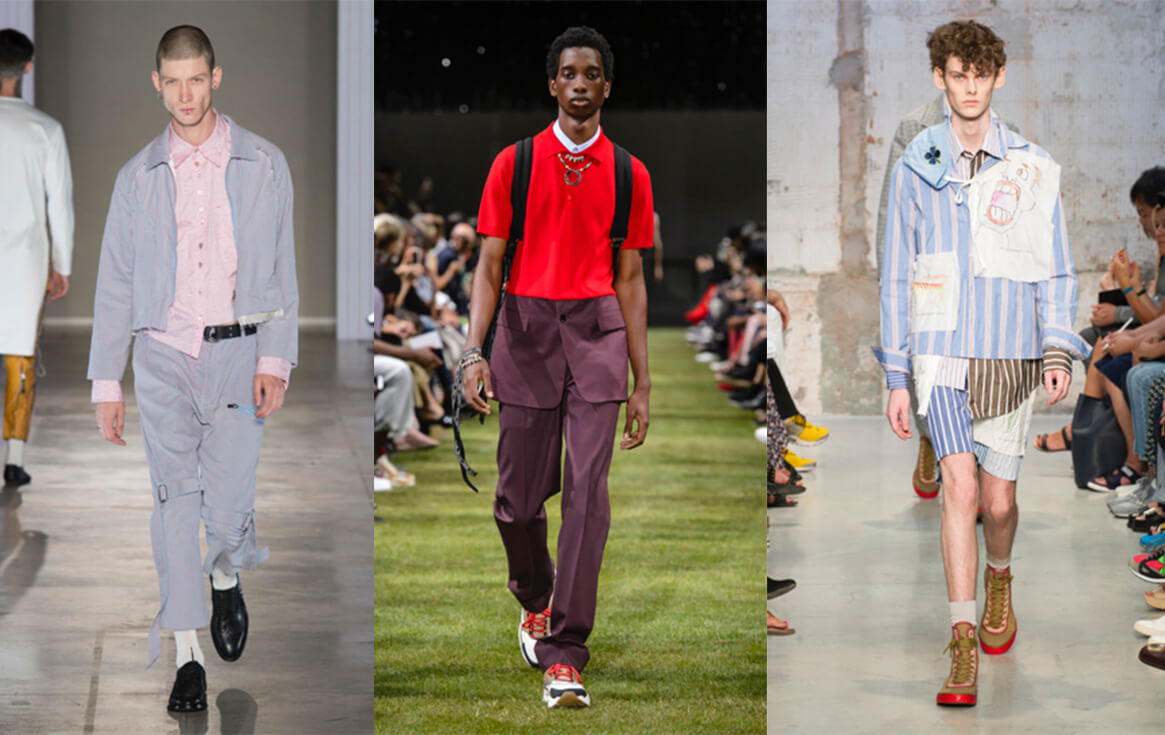 Tailoring plays a huge role in the shows, and as the boundaries of menswear get pushed further into more experimental realms we begin to see some long-anticipated innovation coming through. Casual tailoring at Sulvam mixes a skinhead theme and punk elements with references to Vivienne Westwood’s bondage trousers.

Dior Homme gave a much more modern offering that took classic tailoring and fused in some strong sports details. A more playful take from Marni gave an almost childlike quality to tailoring, with square-cut shirts and matching shorts in clashing striped cloths that looked like one of Grayson Perry’s sketchbooks. 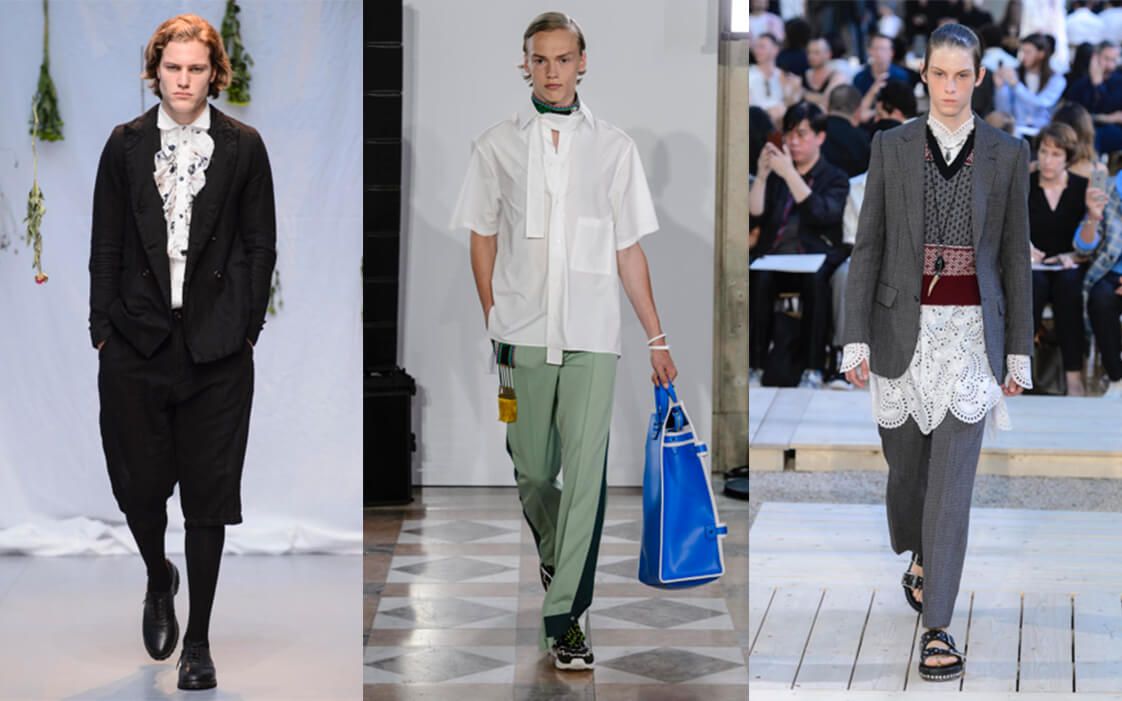 Thanks to brands like Palomo Spain and Charles Jeffrey we’ve started to see a more commercial and less extreme version of romanticism hit the menswear runway. This current trend harps back to all of those classic dandy references we know and love like Oscar Wilde and Quintin Crisp (minus the blushed cheeks and rouged lips), but with a modern twist.

The ‘NEW’ dandy favors a more street-wise mood with many styles just giving a subtle acknowledgment to its foundations—like shirts with integrated ties that give a pussy bow neck detail. Other looks coming through have a more elaborate aesthetic with decedent lace and frills peeking out from under masculine jackets and busy knitwear. 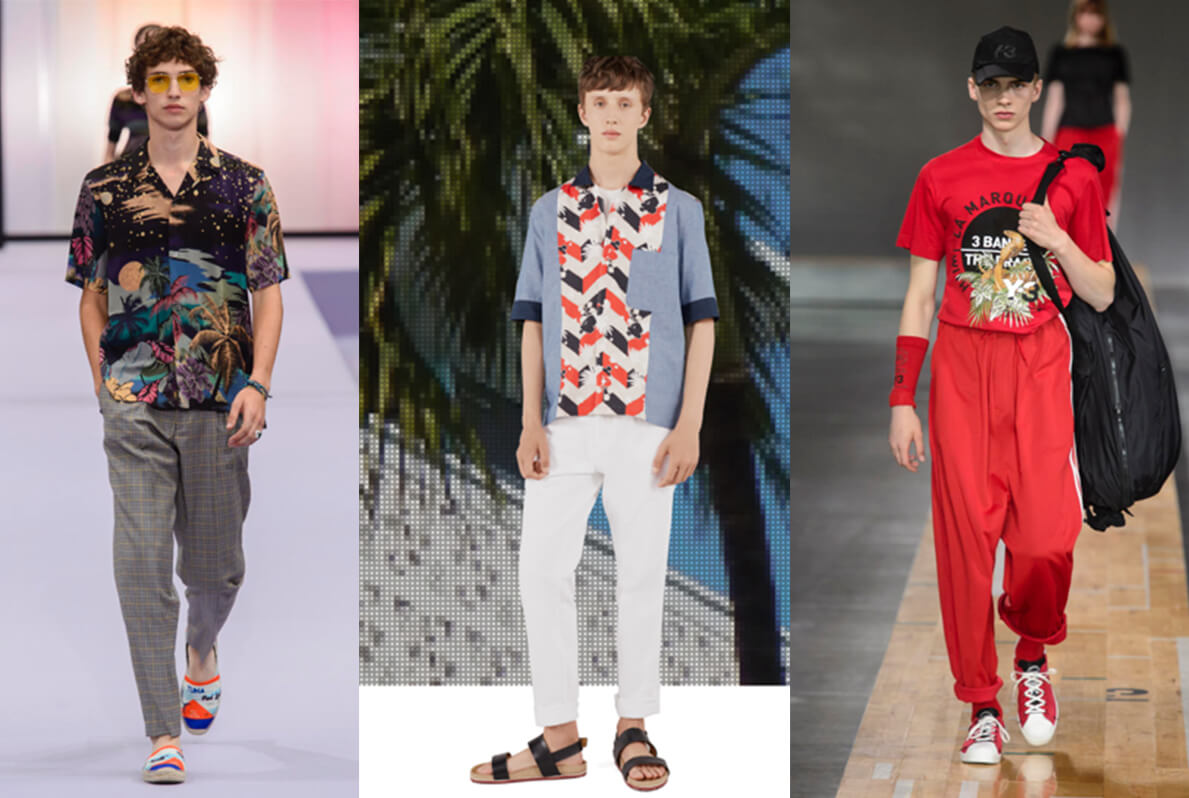 The fashion world has been obsessed with tropical bowling shirts ever since Leonardo DiCaprio graced our screens in Baz Luhrmann’s Romeo and Juliet all those years ago, and the trend has held a prominent position on menswear shelves for quite a few seasons. Spring ‘18 still has a toe dipped in the palm print pond but uses pattern blocking and galactic influences to update that 50’s vacay look, as shown at Paul Smith and Maison Kitsune. The season’s strong sport influence also plays a part in the Tropicana look, so if boxy silk shirts aren’t your bag then maybe a printed graphic tee is a little easier to pull off. 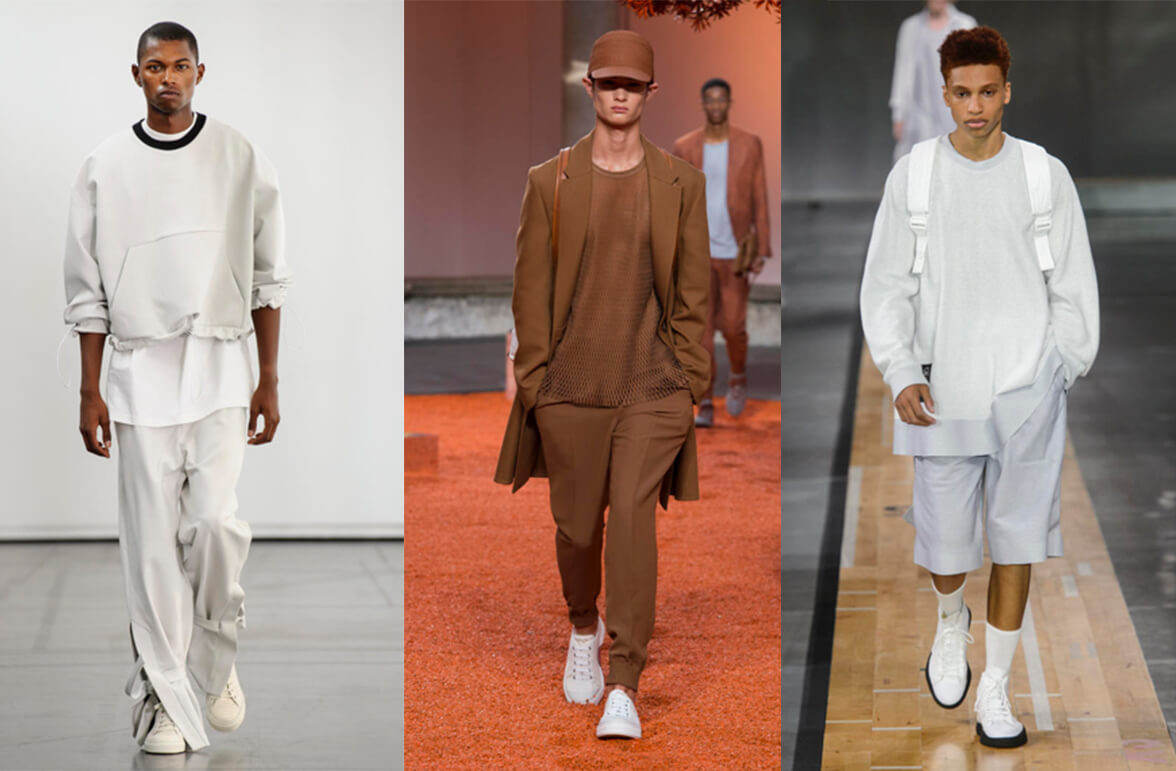 Active wear takes on a much more clinical guise for Spring ‘18, with sports looks having a much smarter feel than previous seasons. The tracksuit is updated with a tailored appeal that displays wide-leg silhouettes and relaxed blazers that blur the line between smart and casual. The days of marled jersey and classic sweatshirt fabrics seem to be long gone as designers opt for high end fabrics to push for a sharper look. Color is key with optic white, soft grey and tobacco brown being worn from head to toe for maximum impact. It’s a little like being at the office and the gym at the same time. 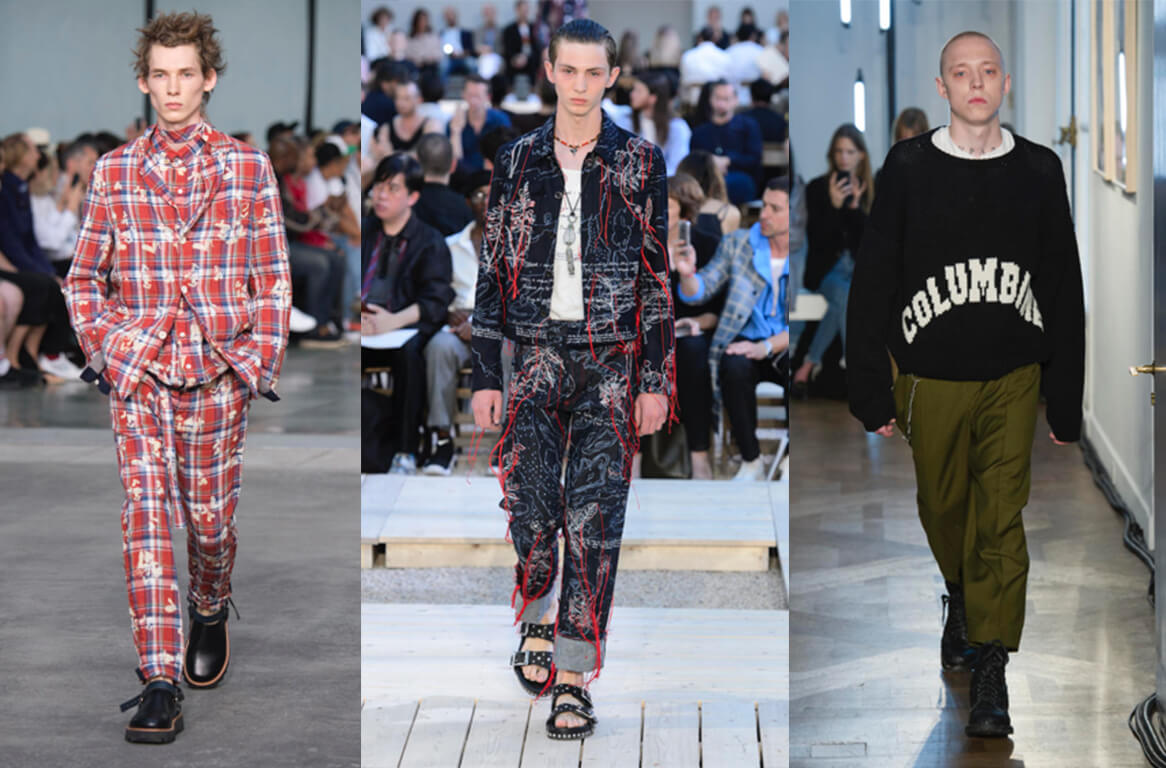 As the state of the current political climate seems to have dragged us through the looking glass into a world of chaos and uncertainty, designers and brands are using their platform to air their views and document social attitudes. Millennials have become a huge influence on the fashion industry, and we’re seeing a new punk movement arise with ongoing displays of protest around the world.

This generation’s predisposition for empathy gives the new punk aesthetic a softer, more peaceful vision rather than the classic Sex Pistols-era aggression of icons like Sid Vicious, Johnny Rotten and Malcolm McLaren. This time around bleached techniques are much more regimented than the ad hoc style of the past, as seen on the tartan suits shown by Sacai. And instead of ripped and distressed denim we see a prettier, even romantic side to punk from Alexander McQueen with denim suits that look part embroidered and part fringed.