Heaven help the attention-seeking contrarians of the world.

Guy Benson’s first mistake was believing he’s the one being discriminated against. Seemingly frustrated with being picked on by progressives, the Townhall editor and Fox News contributor released the video “I’m Gay…Conservative…So What?” The video, which has amassed nearly 700,000 views and counting, takes aim at those who have deemed him as some sort of “self-hating gay person” because of his political ideology.

As he makes clear in the opening moments of his video op-ed, his “values define him” while his sexuality “feels more like a footnote.” This statement is actually literal: He came out by way of footnote in his book, End of Discussion. That’s how little his sexuality has to do with his identity (as for the rest of us, I gather we collectively bark out our letter or letters in the LGBTQ acronym every seven seconds). I’ll hold here for the applause he’s asking for, but hopefully, it’s only the kind given to the soloist at church that didn’t quite hit any of the notes.

Let’s start with this nugget from his video.

“I fully recognize how fortunate I am to live in a time and a country where I can be openly gay and live a normal life,” Benson says. “And that’s in large part thanks to the hard work of gay rights activists who’ve paved the way for people like mepeople who had it much harder than I do, and people who likely wouldn’t share my politics. I am genuinely grateful to them. It’s a new era now. Why ostracize members of our community who don’t toe the left-wing political line?” 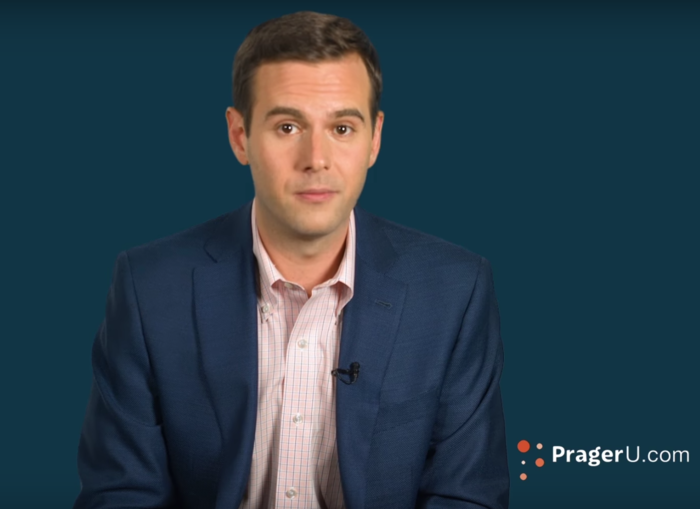 Before I answer his question, make note that the advocacy organization GLAAD just unveiled a survey in which a majority of Americans claim to be “uncomfortable” with LGBTQ people. Days prior, a separate report revealed the number of anti-LGBTQ homicides nearly doubled last year. Among those figures, a majority of the victims were people of color or women (i.e., everyone who doesn’t get to enjoy the mythical metropolis of the well-off white cis man who frequents much more accomodating circles). Both depressing figures were attributed to the Republican administration currently occupying the White House.

As bored as he is with others questioning how he can align himself with a political party in deeply committed relationship with an apricot-hued asshole, so am I with this subgenre of commentary. Let the record show that this boo-hoo-Republican-bullshit is a trope and is painfully common at this point in time. The people who champion these types do so for dubious reasons, but like most subjects discussed on Fox News by anyone besides Shepard Smith, don’t conflate repetition with facts.

There are countless musings to be found across Al Gore’s internet which mirror Guy Benson’s lil’ video. Here’s some of the greatest hits: “I Am a Gay Conservative, And I Think It’s Time You Met Me,” “I’m a Gay New Yorker and I’m Coming Out As a Conservative, “What It’s Like Being a Gay Republican in the South,” and “I’m a Gay Republican and I Hate Identity Politics.”

But if those headlines aren’t everything you need to know, there’s a lot more where that came from in a trope that’s well past its sell-by date. Last August, Dateline profiled Gateway Pundit correspondent Lucian Wintrich in the segment “Gay Conservative Behind Twinks4Trump Takes on Liberal ‘Puritans.’” The Gentleman from Maryland: The Conscience of a Gay Conservative, an autobiography written by Robert Bauman, is about as old as Guy Benson.

Even older is the Log Cabin Republicans, a national GOP group which presumably gets together and to sip chardonnay and cheer their love of small government at the expense of their own subjugation (yes, I realize the cognitive dissonance there, but they got it).

Oh, wait! Am I doing that thing Guy Benson took to YouTube to read the girls about?

Benson believes that far too many of us are being boxed in by our race, ethnicity, gender, or sexual orientation, which he believes has nothing to do with our ideas and values. “Let’s debate issues and stop trying to punish ‘wrong thinking,’” Benson argues. “I’m a Christian, a patriotic American, and a free-market, shrink-the-government conservative who happens to be gay. That’s how I choose to rank my priorities. You know what that’s called? It’s called progress.”

“I just see so many people who are not just gay, but who are black and conservative or Hispanic and conservative, women, who get so much heat because they don’t shoehorn their beliefs into this little, tiny box that the identity politics left insists that they ought to inhabit,” he also laments. “I think that’s wrong, and I wanted to speak out on that.”

Make no mistake, Guy Benson has the right to his political beliefs. He can bust a nut to the thought of an American with the tiniest government imaginable and a society driven by the free market for all I care. But the problem here is that he’s portraying himself as some sort of victim. While he complains about being stereotyped as a result of his conservatism, he manages to generalize those who critique his ilkor for that matter, any non-white, rich, heterosexual who fools with the GOP.

I’m more than happy to judge Guy Benson by his ideology because it (along with the comments made in his video) perfectly encapsulate what I loathe about modern conservatism. It is selfish, self-involved, and exists within a bubble. He can’t see that many of us do not have the luxury of ignoring our race, gender, and sexual orientation because weunlike himcannot assimilate so easily into the status quo. That status quo is built for pink dicks like him.

Maybe some of Guy Benson’s friends are inarticulate with their complaints of him, but ultimately, what he really doesn’t want to be held accountable for is that he only has to deal with merely a whiff of marginalization; as a result, he elected to align himself with those who can look over only the hint of difference they see in him. I don’t want to be lectured by a pampered white man on TV who won’t own up to that.

Believe whatever you want, but fuck off with respect to feigning victimhood. Own your choicesbecause after all, isn’t personal responsibility a virtue of conservatism?