As a scholar of queer South Asian nightlife and performance, I am regularly asked, “But Kareem, why hasn’t there been a South Asian queen on Drag Race?”

Not that RuPaul’s Drag Race has to be the measure of all things drag, but over nine seasons it has helped us take the temperature of a diversity of drag styles across cultures and communities. We’ve witnessed the show shift in trans inclusivity while remaining complicated in its representation of Asian Americans.

So why hasn’t there been a South Asian queen?

Some reasons include: our cultural references and fashion inspirations aren’t always legible to mainstream audiences (except as “Oh, so exotic!”), some of us don’t have permanent U.S. residency to audition, some of us worry about “log kya kahenge?,” some of us perform at house parties or community events and not necessarily in bars, some of us are not willing to compromise our commitment to local activism for the fame of a TV show, etc. Reasons abound.

In the absence of visible South Asians in the recent mainstreaming of drag and trans performance, it’s necessary that we take a second to ask where our queens are, especially when more visible queens constantly appropriate South Asian femme aesthetics: bindis, henna, nose rings, Namaste hands, and multiple arms.

There are SO MANY South Asian queens across the world who expand not only our understanding of who a queen is, but what South Asian genders look like. They are punk and Bollywood, burlesque and Broadway, aunties and animé, carnival and club kids.

This Tamil-Singaporean comedian’s sharp wit has even my bio-family forwarding me his clips on Whatsapp! In addition to being a TV host and stand-up act, he is also one of the very few openly gay celebrities in Singapore.

Gigi is a Hong-Kong-based advertising creative mixing corporate culture with couture, contour, and choreography to serve up animé advertising exec. Shout-out to her on-point backup dancers and her boy-mug highlight.

Masala is the host of Trikone-Chicago’s quarterly queer Bollywood party Jai Ho! She sews her own outfits, builds her own wigs, and can serve you everything from Aishwarya Rai to Ariana Grande. Don’t miss her Priyanka Chopra Met Ball look!

Toronto’s Manghoe Lassi is just like her namesake drink: thick, tasty, and served best with a side of samosa. This bearded queen, a vet-tech by day, is padded with hips resembling the subcontinent, and she has developed a signature eye look: heavy black liner, a cut crease all the way in the middle of the forehead, and a dramatic glitter filling. 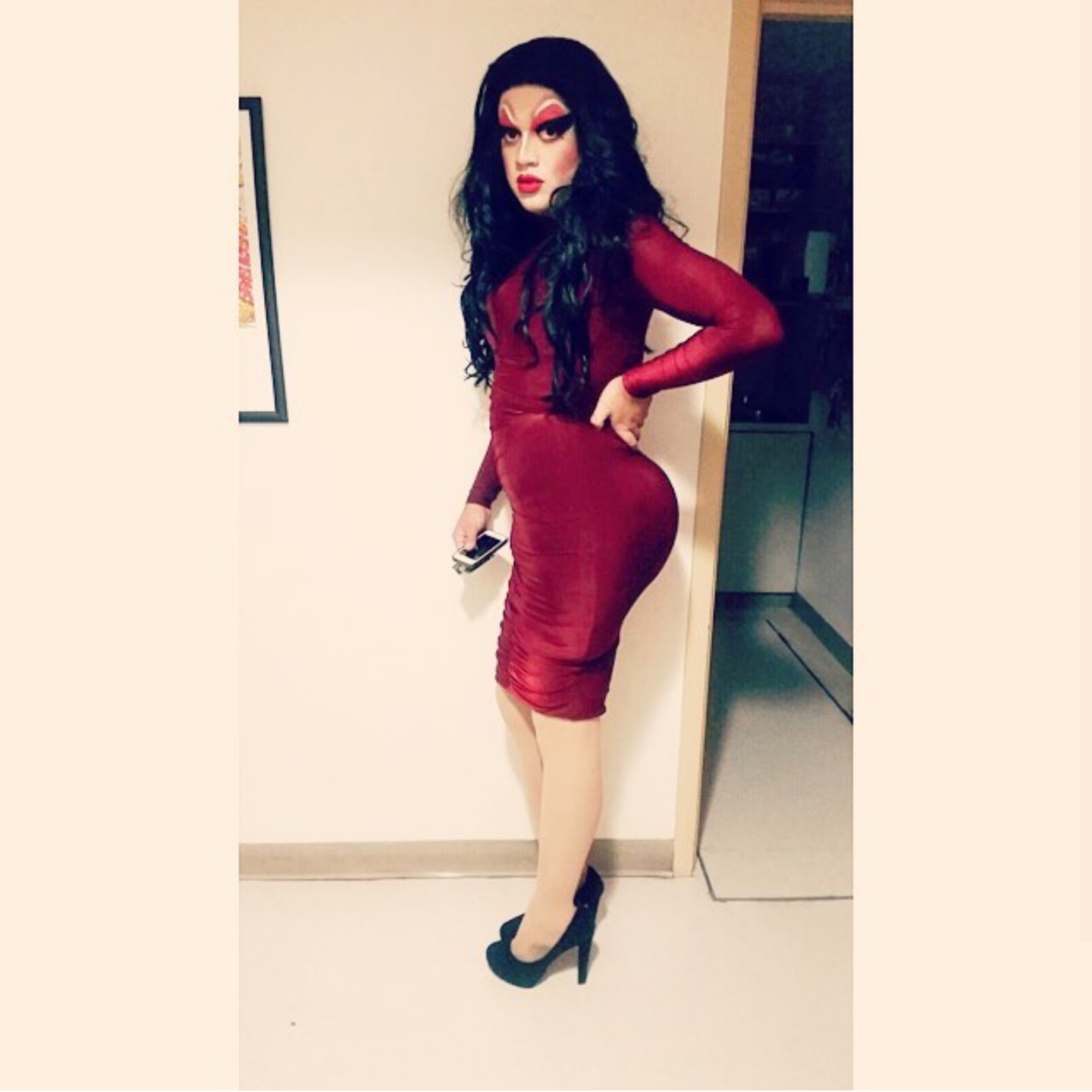 This biracial Indo-Trinidadian queen in Toronto always serves a vibrant pop of color in her makeup, but don’t let her pop art looks distract you from her smarts. She’s an academic queen researching race, gender, and music, and also posts her musings on culture and diaspora on her Two Brown Boys blog which she shares with her boo, Manghoe Lassi.

This fine arts Pakistani queen living in the Bay Area is famous not only for her politically savvy drag, but also her stunning visual and fabric art. Inspired by the cloyingly sweet and queerly textured dessert-drink she is named after, Faluda’s signature look is a Pepto-pink burqa and an ornate unibrow. She uses her drag not only to discuss the histories of nationalism, fundamentalism, and islamophobia, but also to make space for other Muslim queer and trans artists.

Also an art school queen, Zeeshan’s fantasy looks are devastatingly beautiful and are unlike any other queen I follow. Zeeshan draws inspiration from and sources materials by shopping in the streets of Bangalore. A former medical student, he enjoys the inspiration and support of his lovely mom in his pursuit of makeup magic.

watching you / watch me @themarlborough

Alok is widely known for their poetry, fashion, and multimedia performance. More recently, Alok has taken to incorporating the costume changes and punny pleasures we associate with drag artists into their shows. Don’t miss their jumpsuit printed withthemself!

Maya is a distinctly Malayali queen, reminding us that gender manifests differently in regions across the subcontinent. Beginning as Mayamma, a small-town queen in a signature Kerala look (white sari, jasmines in her hair, barefoot) but who could also belt out Broadway show tunes, she has now become a high funda Bangalore beauty in expensive ghagras giving TED Talks.

From Mumbai’s Marine Drive to Chicago’s Lake Shore Drive, this artsy queen serves impersonations, glamouuuuuur, and legs for days. Their performance tricks will leave you gagging: Arya Stark face peels, dresses and heels made of real glass, and outfits that change color while they dance. Building off the success of their Bad Betis photo series, they also hosted a night of Asian American drag at Berlin Nightclub in Chicago.

This Chicago-based transfemme artist draws on a variety of femmespirations, divine and profane alike. Their inspirations include high-fashion runway couture, Bollywood film, and their mother’s saris, which they use in their performances to celebrate brown queer trans power. Also, that booty! 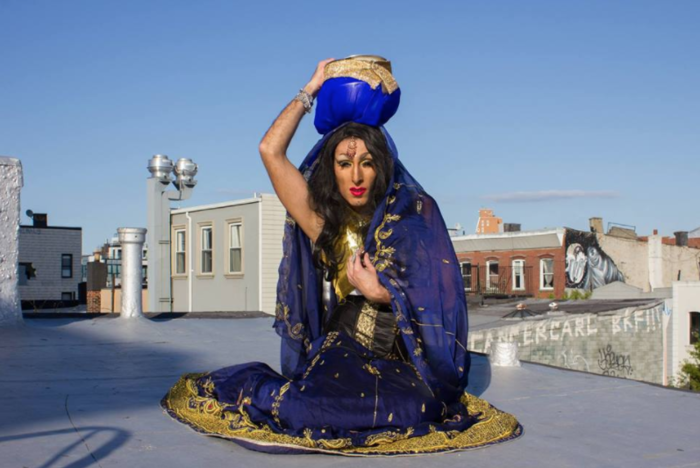 Tara Ryst, get it? TaraRystTarraryst. LOLZ. Not only does her name give the finger to racists who think all brown folks are terrorists, her salacious hip action will leave even the most xenophobic white boy hungry for some mutton biryani. When Tara gets out of her sexy Pakistani mujra drag, she is a muscle beefcake who can dance with swords. *drools*

This trans queen from the U.K. has been working hard to dispel assumptions about Muslims in the queer community and misconceptions of queerness in the Muslim community. She, like many UK nightclub performers, sings live and has several smart song parodies online that take on racism, interracial desire, and internalized homophobia. 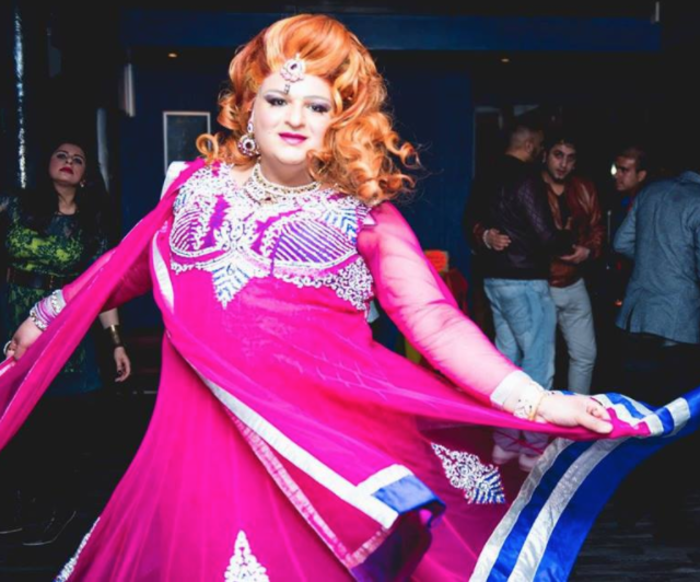 Seemaa Buttsee ma butthilarious! This big girl from Birmingham is serving you big fat Bollywood wedding every time she steps out onto the streets: paisleys, pearls, and pageantry! She has been an important mentor to many young Muslim queers and queens in the U.K. and is an outspoken advocate for trans equality.

Her name is drawn from the Bollywood bombshells of the 1970s and 80s, Zeenat Aman and Parveen Babi. Like her namesakes, this Sydney-based queen is a sensuous Bollywood dancer, who also played the role of Sunderella, in a queer desi adaptation of Cinderella produced by Trikone-Australia.

When @prazchoreo first told me about our Britain’s Got Talent routine, he asked if I’d be open to performing in a skirt, with make-up, and although a little scared, I replied saying “No problems at all! I just want to dance!”. My only worry at that time was mum and how she’d react to it. Although my biggest champion, this IS someone who initially had a hard time accepting me as queer. Now to tell her that I’d be performing a gender-fluid themed routine on national television scared me to no end. But I knew how important this was and how much I wanted to do it. When I told her about it, her immediate response was “Who’s going to do your make-up?! You have to look stunning! Do you need me to send you any outfits? This is amazing!”. LOL! I love her so so much. She’s come a long way and I’m so grateful. When I sent her the picture above (left) from our audition, she said, “Stop clicking pictures with your face half cut! You look nice, show the world!”. I asked her if she was okay with everything and if she’d be able to handle any negative comments from family/friends/public and she said, “You don’t worry about that. Go and have fun!”. And I did. I’ll admit, I was petrified at first. But I had the time of my life. I love you, mam. A lot! ❤️ . . S/o to @shamina25 for my audition make-up and @hannahlonerganlondon for my semi-final look! . . #bgt #britainsgottalent #londonschoolofbollywood #desi #queer #genderfluid #gay #makeup #mua #fashion #indian #britishasian #asian #pride #poc #brown #transformationtuesday #love #ootd #dance #bollywood #instamakeup #instagood #instadaily #instamood #igers @bgt @londonschoolofbollywood

Apparently, Cinderella is popular with the desi queens! Hailing from Jakarta, Indonesia, Shiva (as part of the London School of Bollywood) took Britain’s Got Talent by surprise with a Bollywood rendition of the fairy tale. The judges weren’t just impressed by the fierce twirls, sequin costumes, and cute lipstick, but also by the bold reimagination of genres and the role model Shiva could be for gaybies everywhere.

This thick brown femme is what happens when Nicki Minaj and Mindy Kaling make a baby! One of the few queens on this list who actually performs on a weekly basis, in bars in Philadelphia and Albany, NY, Nicki is always serving big hair and a Trinity-tight tuck.

This Seattle hair stylist will have you thirsty AF in their THOT boy drags (which mostly consists of thongs, chains, and tattoos), but their femme looks are ovah with more textures, braids, contacts, and piercings than a body can handle. This Pakistani-Irish multigendered artist is taaaalented, not only as a stylist to most of Seattle’s drag queens, but also as a gogo dancing pup and a burlesque artist.

This queen embodies the multicultural confluences of New York as a non-binary, genderfluid, mixed-race, Guyanese, Muslim queen. She paints a sickening bushy Pakistani eyebrow, and can lip-synch in Punjabi, Hindi, Spanish, and English!

Tranie Tronic drew on punk and 80s synthspirations to produce her debut album Transmission and several music videos in 2009. Wearing as little clothing as possible, she takes on politics, intimacy, and desire, and her music videos will have you longing for a collaboration between Anastacia and M.I.A.

Born in Gibraltar, raised in Ghana, living in Boston, trying to make it to Bollywood, and always putting the aunty back in cunty. Don’t I look great in this sari?

Kareem Khubchandani is Mellon Bridge Assistant Professor of Drama & Dance, and Women’s, Gender, & Sexuality Studies at Tufts University. He is working on a monograph about gay Indian nightlife, and co-editing a volume about queer nightlife. He has published essays on transgender theater, diva worship, diasporic film, and queer activism. Find him on Twitter and Instagram: @kareempuff