Spencer Day believes in Hollywood endings, and he has since he was a kid. Now, he’s a 40-year-old singer-songwriter with a single that made #27 on Billboard’s Adult Contemporary chart in October.

He’s a self-described “fomomomohomo,” a former Mormon homosexual, who grew up in Utah on a corn-fed diet of MGM and Disney movie musicals. Singin’ in the Rain is his favorite, but his preference is less for shows than for lush numbers in which characters escape to or imagine fantasy places, be they Bali Ha’i in South Pacific, Oz in The Wizard of Oz, or Laurey’s torrid dreamscape in Oklahoma. Early on, Day came to imagine Los Angeles as the fantasy place to which he, himself, wanted to escape. He never wanted to be rich or famous, but he was attracted to the mythos of L.A.’s glamour, different as it was from his sheltered upbringing. His adulthood has bounced him around the country, landing him in L.A. three times — long enough for the sheen of showbiz to wear off and for him to lose his joy in making music.

Lucky for us, rather than give up, Day used his disenchantment as a starting point for his latest release, Angel City, released on iTunes on June 1. It’s a beautifully eclectic personal epic in which he exhorts us to pursue our deepest desires, even as we reckon with the disappointments we face on our journeys toward them. It’s also a bittersweet love letter to Los Angeles, which he treats as a synecdoche for a creative life in thrall to the machinations of the entertainment industry. 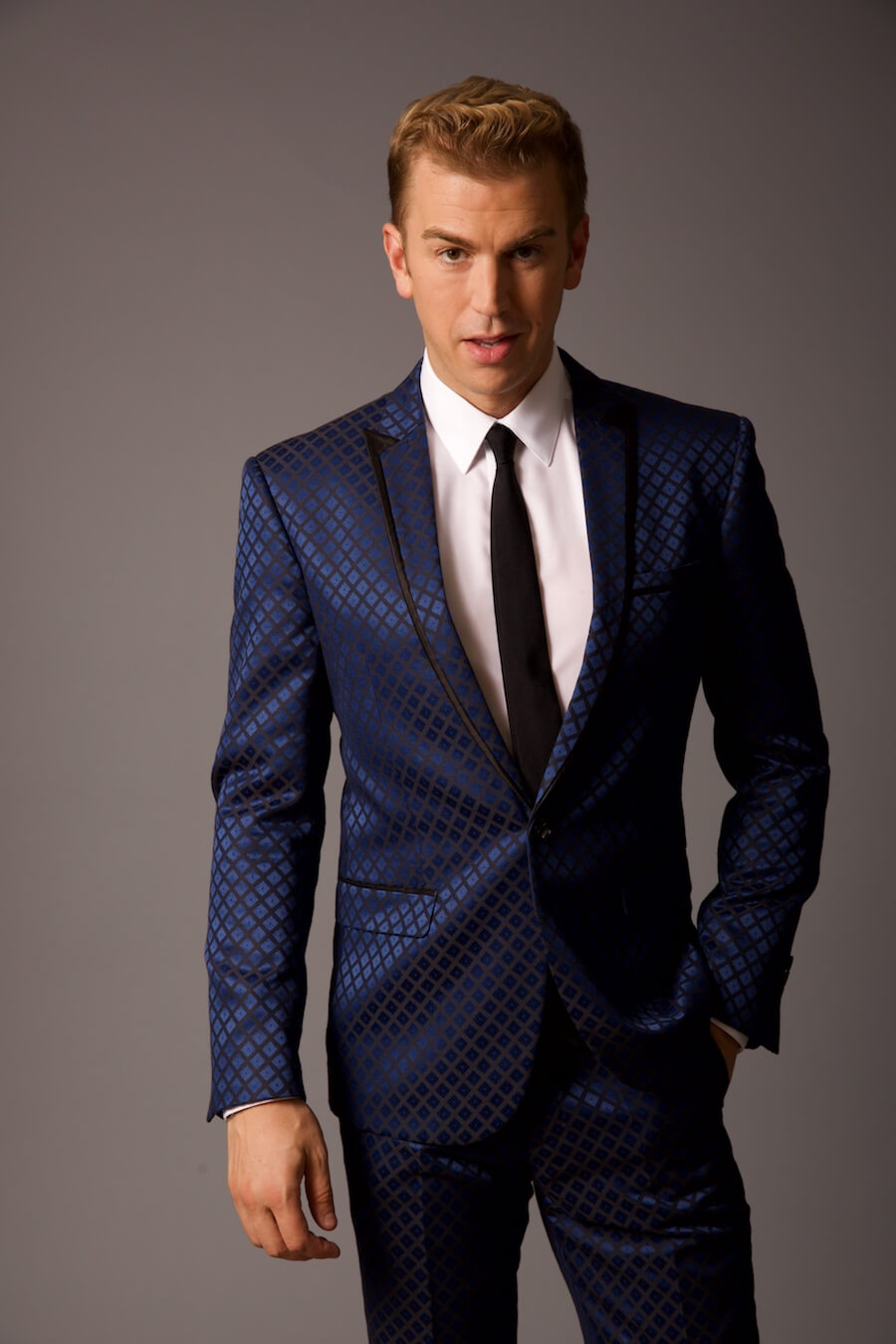 Mormonism certainly didn’t prepare Day for many of his creative disappointments, but he sees his sheltered childhood as, ultimately, a benefit to his craft. In spite of the many restrictions on the media he could take in, musicals with adult content, like Gentlemen Prefer Blondes and Some Like It Hot, were regardless seen as “wholesome enough” in the Mormon community: “Some of the gayest straight men I know are Mormons, all singing, all dancing, all musical theater-loving,” he laughs. “Sometimes being sheltered allowed me to incorporate [musical theater] in a very organic way and then create a hybrid of musical styles now,” he continues. Nowhere is this hybridization more apparent on Angel City than in its juxtaposition of a first-track overture — which could easily prelude a Sondheim musical — with the cycle of songs that follows it, which draws from influences as diverse as Jimmy Buffett and Henry Mancini.

However, his eclecticism has gotten him in trouble with major labels that have wanted to box his work into neat categories. “When I was younger, it was right about the time Michael Bublé was signed to Warner Brothers, and they kind of wanted their answer to that,” he says. It makes sense — Day’s voice has a smooth, warm timbre comparable to Bublé’s. “The frustration early on was, ‘Why won’t you just sing my grandmother’s favorite song?'” But Day’s sources are less informed by genre than they are by storytelling. “I like any artist or song that casts a spell and really takes you to a place,” he says. His career has survived these industry critiques, and Angel City‘s compelling emotional narrative is best felt when listened to front-to-back.

Genre is hardly the only challenge he’s faced from the industry. Day entered the music business at a time when most artists, like Ricky Martin, only came out of the closet once their careers had blown up. “I was never ‘in the closet,'” he says, “but I think I was definitely more cagey about it, as far as just, ‘Nobody has to know.'” His homosexuality was a deal-breaker for music executives at the beginning of his career, not because they themselves took issue, but because their audiences — who wanted to be able to fantasize sleeping with artists while listening to their music — did. “That’s very much a thing for a lot of people, and I’ve gotten a lot of hate mail that has informed me that that is a thing for some people,” he says. “A lot of women, actually — when I first did my Advocate article — saying, ‘I used to love this song, but now it makes me sick to my stomach. It’s such a waste.'”

Day considers himself lucky to have followed the footsteps of artists like Rufus Wainwright and k.d. lang, who never hid their sexualities in their career personas.

“They were not making any attempt to,” he continues. “And I think that was incredibly brave for both of them, and it just made me feel like, ‘Maybe I’ll never be as big as some people, but there will be room for me, and there’s space for me to live my life in an authentic way.'” He admires that their skill always outstripped their sexual orientation in terms of the broader culture’s conversations around them.

Day has struggled with mental illness, but it hasn’t stopped his creative momentum. He was diagnosed with clinical depression at age nine; his continued low self-esteem made him vulnerable to “bad people” and “bad decisions” in early adulthood. “I think most young gay people [struggle with self-esteem], to some degree,” he says. “Especially if you grow up in a very religious environment that encourages even more levels of feelings of self-loathing or lack of self-worth, it makes you especially vulnerable to any type of escaping.” “72 and Sunny,” Angel City‘s hit single, offers a moving and insightful portrait of a character who hides his suicidal thoughts behind a smile in order to get by in an image-based culture: “I’m gonna fake it till I make it / and everybody’s gonna believe it.” Los Angeles may have commodified Spencer Day’s cheerful demeanor at the expense of his mental health, but he’s lived to reflect on the encounter with humility and self-respect.

Angel City can be heard as a musical in two acts. Day’s central character “believes in the Hollywood ending,” and that he’s “no longer pretending” in the idyllic, jazzy noir landscape painted in “Angel City;” he faces an array of disappointments in Act I (most obviously in “The California Yes”) that lead to an existential breakdown in “72 and Sunny;” then comes to terms with himself and Los Angeles, neither of which have met his expectations, in Act II. “Somewhere There’s a City” points to a perfect elsewhere, a sort of heavenly home in which the desires established in the beginning are recapitulated with the context and color of life experience.

Day’s aesthetic diversity coheres the theatrical vibe of the record, and it never lets the ear get tired. “Ghost of the Chateau Marmont” features ghostly strings reminiscent of Sweeney Todd, placing it as the most self-consciously theater-y song on the album. Cole Porter can be heard in the lyric structure of “I Got Love (Gold Digger),” “The California Yes” hearkens to the orchestral voicings of Sufjan Stevens and the vocal stylings of Gabriel Kahane; “I Wish I Didn’t Care” seems to be a tribute to Michael Bublé; and “Training Wheel” could be sung by Sara Bareilles, and features an Oscar Peterson-style piano solo. The instrumental “72 and Sunny Interlude,” which precedes the single, calls to mind Joni Mitchell’s “Down to You.”

The aesthetic pluralism of Day’s work speaks to his willingness to make room for antagonistic perspectives outside the context of the record. “I just did a show in Indiana, and Mike Pence’s mom was there,” he chuckles. “And I did this comedic song called ‘Who’s Your Daddy?’ that I made the day of with my friend John. We had a lyric and it was like, ‘She was rugged, rough, and tumble from the wrong side of the fence / Lookin’ like a poor man’s bargain-basement version of Mike Pence. / They asked her, “Hoosier who’s your daddy? ‘Cause you sure are looking fine! / You deserve a big ol’ diamond and a California wine.”‘ I can’t remember what the rest of it was, but I guess the point was, I made some jokes about it, and very intentionally, in a way. Because even if you were super racist in the ’30s, at some point, you had to acknowledge that Ella Fitzgerald had a beautiful voice…. That will make more barriers come down than anything — if you can make people happy.” While he supports direct action as a legitimate form of political protest, he also aims “to be a part of a generation… where [sexual orientation is] as incidental as mentioning [his] eyes are blue.” 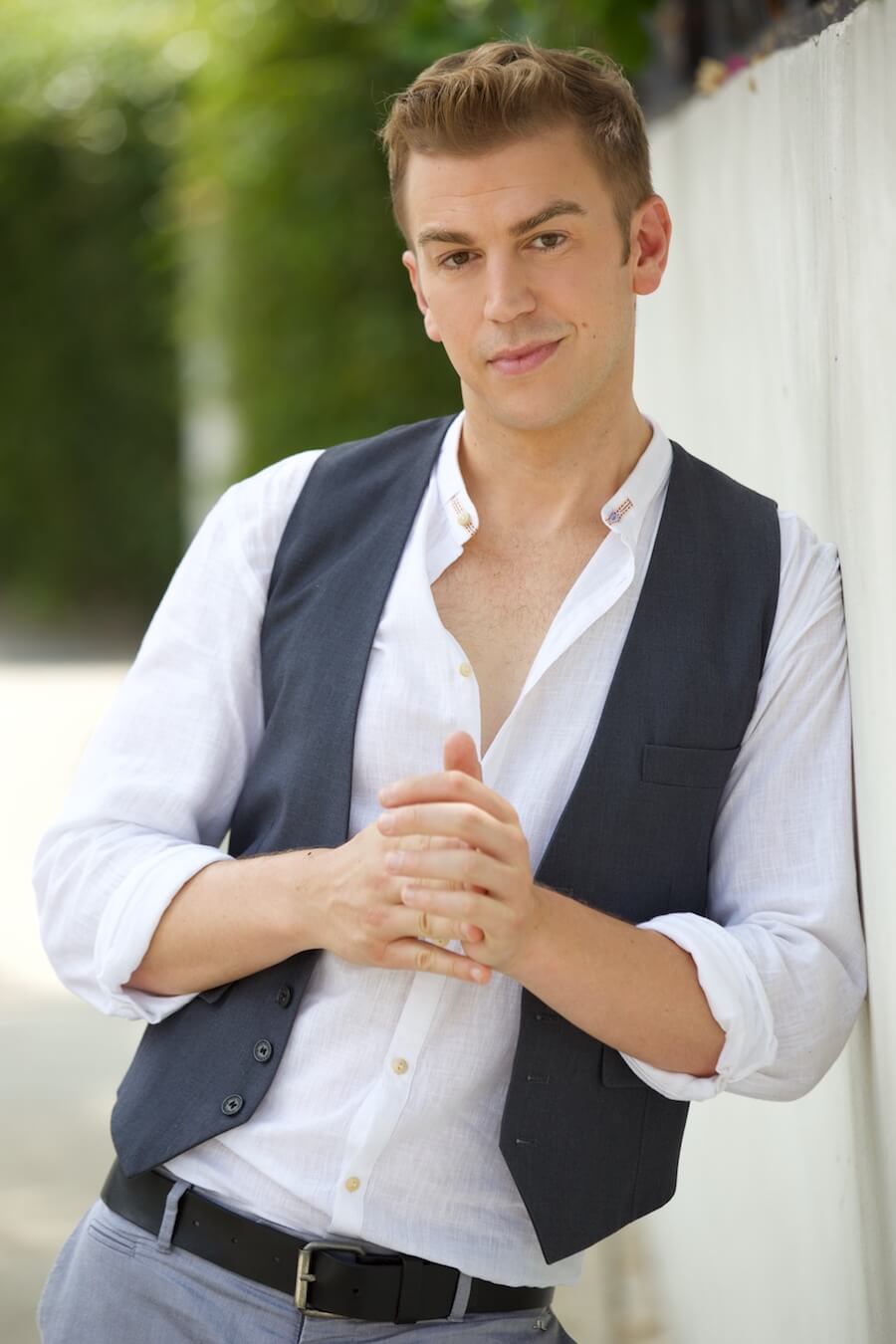 In addition to his work as an advocate for LGBTQ+ equality, Day also insists on being counted as an advocate for mental illness. “I don’t know any stupid people who are junkies or alcoholics,” he says. “Everyone I know that felt the need to escape the hardships of this world have been highly intelligent, sensitive people. And the world can often not be an intelligent or sensitive place, and so it can be a tough world for dreamers and empathetic people.” His own struggle with mental illness and substance abuse is a double-edged sword: “I wouldn’t be the person I am without this deep ability to feel. There’s a blessing and a curse that comes with everything, but I think — instead of looking at these things as far as dismissing people as crazy — most empathetic artists, or creative people, who are good at conveying emotion, are not going to be able to do that unless [they’ve] known what it’s felt like.”

Whether he’s repurposing the paradisaic sensibility of his childhood to suit his imaginative narratives; practicing faith that humans are fundamentally worth trying to reach; or turning inward to make meaning of his own suffering, Spencer Day is preoccupied with redemption. Angel City synthesizes his way of being in the world as a sophisticated, mature set of earworms that entertain as much as they edify.

More than anything, though, the album is a powerful meditation on the nature of growing up with our dreams. The character in the opening song, “Angel City,” isn’t to be taken as wrong or foolish, even as his perspective is limited — Day wants us to leave this album knowing that dreams have to be clarified and tested by time. That is, if they’re going to survive.

Spencer Day performs at The Green Room 42 (570 Tenth Avenue at 42nd Street, on the 4th Floor of Yotel) on July 20, August 17 and September 21, following an extension of his residency at the venue. All shows are Fridays at 7:00 PM. The cover changes is $20-25 with $50 premium tickets (which include preferred seating). There is no food and drink minimum. For tickets, please visit www.TheGreenRoom42.com