There’s nothing inherently queer about Spongebob Squarepants: The Broadway Musical. Or arguably, everything about the musical is queer. But that’s just because the Spongebob TV show was so incredibly queer to begin with.

First there’s Squidward. He fits the trope of the older, jaded queen to a T. He’s cultured, misanthropic, and has resigned himself to growing old bitterly, insistent on bursting the bubbles of the younger gays (i.e. Spongebob). Then Spongebob, I mean, you’ve seen the TV show, Spongebob has got to be one of the gayest twinks there is. Sandy, too, super gay. She doesn’t need a man because she is 100% not interested in men. She rather kick a man’s ass using her Karate skills.

Now I grew up with Spongebob. As a queer millennial born in 1991 who only watched cartoons until he was 16 years-old, Spongebob was my jellyfish jam. That’s why I found the musical as enjoyable as I did. 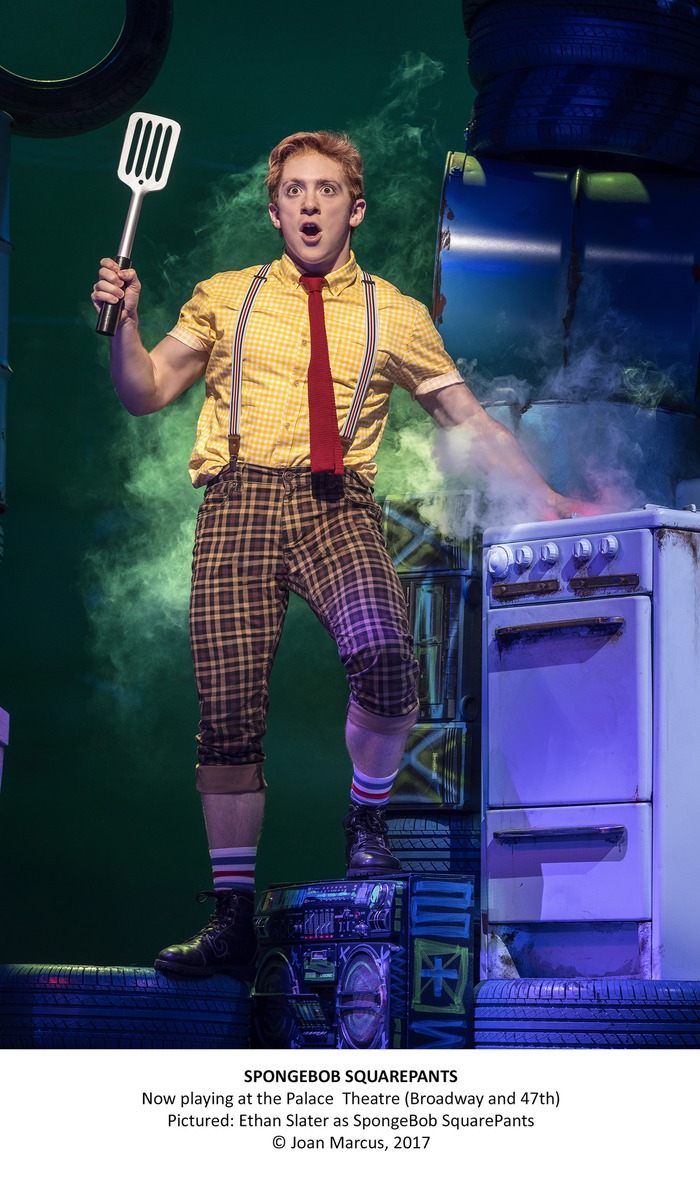 If you grew up watching Spongebob, you will appreciate, dare I say love the Spongebob Musical, too.

At first, I was skeptical, especially when I saw that the The Spongebob Squarepants Musical marketed itself as the “Broadway Musical For Everyone.” Usually when a show claims “fun for all ages,” it means that younger kids will love it, and parents will like it for the sole purpose of having 90 uninterrupted minutes of peace.

What didn’t help is the fact that the opening scene involving Patchy The Pirate (Jon Rua) sets a misleading tone for the rest of the show. It gives the feel that the show is for children; not all ages.

Then Spongebob Squarepants wakes up on stage. Spongebob (Ethan Slater) is undoubtedly the star of the show, and I will be shocked if he’s not nominated for a Tony. Not only is his comedic timing with Sandy Cheeks (Lilli Cooper) and Patrick Star (Danny Skinner) spot on, he brings the dying art of physical comedy back to the Broadway stage.

This is how Ethan is able to embody Spongebob without using any cheap gimmicks, like wearing a large, yellow, square cardboard cutout. He sings while upside down, scaling a 20-foot cage-fence structure, doing the worm, and in so many other contorted positions. Even while sounding eerily similar to Tom Kenny, who voices Spongebob on TV, Ethan’s vocal talent shines through. It’s no easy feat belting while simultaneously having the goofy high-pitched voice of Spongebob. Yet Ethan not only makes it appear seamless, but also makes it sound damn good.

Then, of course, there is the music, which is spectacular. This is no surprise given that nearly every song in the musical was written by one of the greats: John Legend, Plain White T’s, Yolanda Adams, Cyndi Lauper, Lady Antebellum, Sara Bareilles, Steven Tyler and Joe Perry of Aerosmith, The Flaming Lips, and even the late David Bowie. 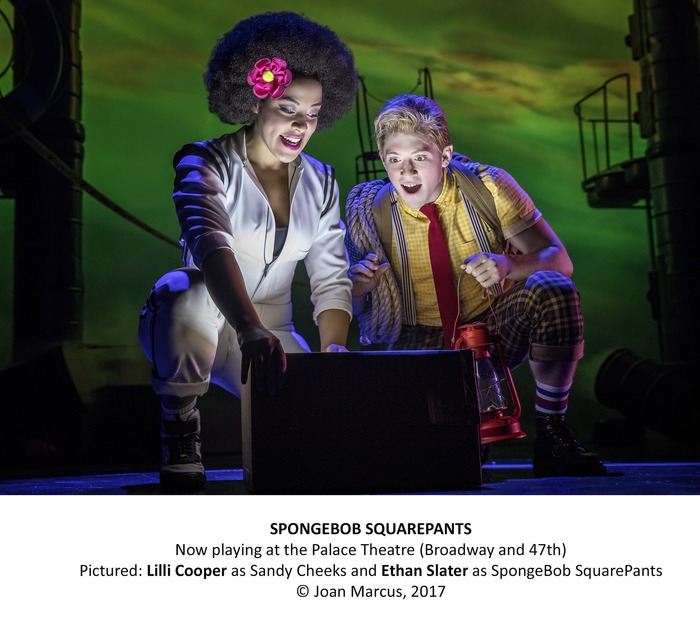 David Bowie’s “No Control” is undoubtedly one of the best songs in the show. The song, placed towards the beginning of the show, is ominous and chaotic. The entire town of Bikini Bottom (meaning the entire ensemble) sings the musical number once they learn of the impending doom set to destroy the town in merely 36-hours. The other song that stands out is “(Just A) Simple Sponge,” written by Panic! At the Disco. It’s somewhat of a theme song throughout the musical. It’s the song you hum to yourself after curtains close.

There are also tons of subtle references that pay homage to the original show. Despite having not seen an episode of Spongebob in over a decade, I was still able to recognize most of them. For example, how the characters in bikini bottom swear with phrases like “tartar sauce” and “fish sticks,” to the real inappropriate curse words being bleeped out with dolphin sounds. Every time Pearl the whale (Jai’ Len Christine Li Josey) walks, the drummer bangs his drum, imitating how in the show, the ground shakes whenever Pearl steps. They even have a whole song, written by the Plain White T’s called “BFF.” There are multiple times in the TV show when Spongebob and Patrick refer to each other as BFFs. Lastly, you could tell who in the audience watched the show when they laughed as Patrick asked, “Is mayonnaise an instrument?”

The only real disappointed is at no time did Mermaidman and Barnacleboy make an appearance. Honestly though, you’ll be too distracted looking at Spongebob’s absolutely absurd movements and equally absurd muscular body to even care.