This time last year I was swept up into a veritable Frank Ocean firestorm. In the span of 72 hours the artist had dropped two albums, a music video, a 360 page magazine and opened a series of pop up shops from which to distribute it all.

I, as both fan and freelance writer, was cataloging every second of it while attempting to savor every morsel: forcing my cab driver to play Blonde mere hours after its release as we flew down the West Side Highway towards the New York pop up; humming to Endless while flipping through a borrowed copy of the Boys Don’t Cry zine the next day.

But in all of that, it wasn’t until last month, standing in the field at Panorama festival, watching Ocean himself perform in a white $19, “Why Be Racist, Sexist Homophobic, or Transphobic When You Could Just Be Quiet” tee under a disco ball surrounded by other queer fans of color that I realized that I wasn’t alone in this inexplicable connection I felt to the artist.

I was not an early adopter of Frank Ocean. My entry point came subtly when I heard his vocals on Kanye West and Jay-Z’s Watch The Throne album. Then there was the revealing Tumblr letter following questions about his pronoun usage in a song and finally there was Channel Orange, the album.

From that project, “Pyramids” sent me to sleep every night for two months and “Thinkin Bout You” woke me up. Frank was my “Bad Religion” and while at first I couldn’t put it into words, there was something about the way he talked about his emotions that resonated with me in a way that few others had.

“’Bad Religion’ solidified my interest in his music,” Dion McKenzie, AKA Tygapaw, a DJ and the founder behind the queer nightlife collective Fake Accent in New York, told INTO. “I cry every time I hear that song. People who do not live the reality of being queer and black will never understand the pain and internal struggle that comes with, but that song will give you some insight.”

In the track, Ocean takes refuge from the demons that surround him in a taxi ride, using his driver as both confessional priest and therapist. The lyrics spin together a tale of both unrequited love and the story of being closeted at the same time, of not only not being able to reveal your true self for fear of condemnation but of the helpless state that love can put you in. And even though here, Ocean’s lyrics in particularly refer to a male, in other songs it wasn’t just the way he talked about his emotions that found traction, but also the way he talked about his lovers. 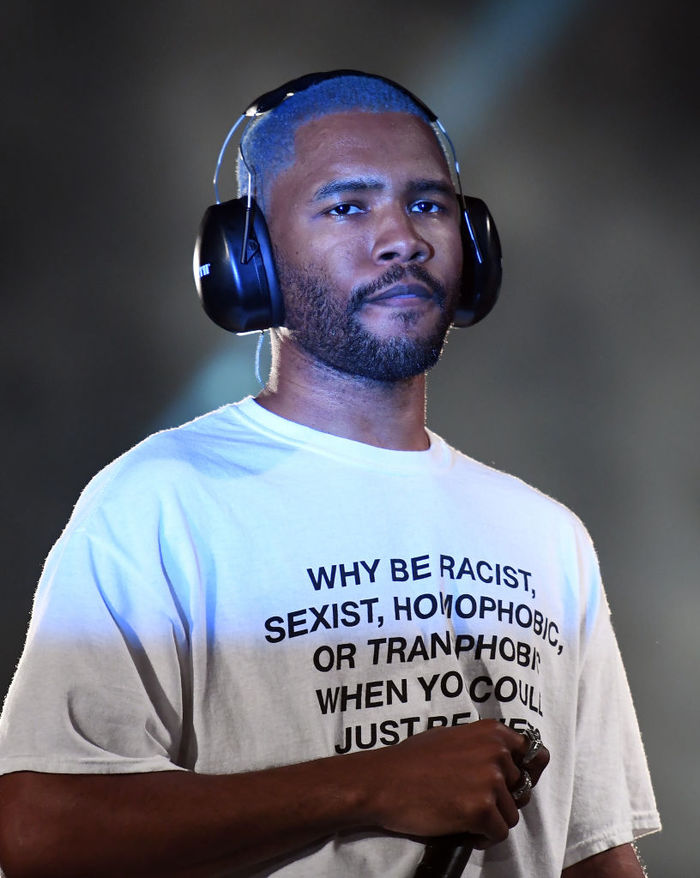 “There were some songs he never specified the gender of the person he was talking about,” writer and editor Stephanie Smith-Strickland told INTO. “I used to do that myself a lot and say they because I was too afraid to say her. You don’t even realize you’re protecting yourself on some level and that comes through in his music. And I think it resonated.”

By the time Endless released I was fully baptized as a disciple and an Ocean fan. At one point during that weekend, after Endless and “Nikes” had dropped but before the pop up shop announcement I lay in bed, overcome, floating on the waves of the album. “Feelings come, feelings go, comme des garcons” I crooned. Just like the boys, they do indeed.

It was during the opening song at Panorama that the crowd around me felt like a “we,” like a congregation. It was during the harmonizing of “Solo” specifically: Frank had lowered the mic from his own lips and we had continued. Some voices off key, some out of pitch, they called out the long “oooooooohs” of the track.

I was transported back to the Sunday mornings and black churches in the South I was brought up in. The feeling that even if I hadn’t ever spoken to them, there was a shared experience with the rest of these worshippers, that they saw me and that I saw them even though we didn’t know each other. The feeling intensified as the cords to the second track of the night queued up. I turned to a white boy who was asking “What song is this? What song is this?”

“If you don’t know what song this is you don’t deserve to be this close to the stage!” someone yelled back, a few others concurring I was one of them with yells of “move” before launching into the first few lyrics of “Chanel.” That track has been called a bisexual anthem for its careful wordplay and though Frank doesn’t publicly identify with that orientation, the experience he put on display in the song holds weight.

“With Chanel …” Strickland said. “I was like, I understand. I see on both sides too Frank. Somedays I want a girl to sit on my face and some days I’m like I would like some dick with that.” Later, as I bounced around reciting the lyrics to “Comme Des Garçons,” I watched two women of color make out, wrapped up in their emotions.

To be clear, it was not Ocean’s coming out as something other than heterosexual that caused these fans to first listen to the star’s music, it was his pure talent.

“The way that Frank Ocean’s music made me feel when I listened to the songs, and when I sang along to them is what I think made me become a fan of him and a fan of his artistry,” photographer Myles Loftin told INTO. “I remember the first song I heard of his was ‘Thinkin’ Bout you’ and then discovering his whole discography and becoming obsessed.”

“[His sexuality] added to it once that information was disclosed in the open letter he published on tumblr,” Loftin continued, with both Smith Strickland and McKenzie saying similar things. “But I don’t think that I’m a fan because he’s queer, I’m a fan because I have a huge appreciation for his work.”

Even so, there’s a lot of talk about space these days; about having spaces that feel safe when the world doesn’t, about being allowed space to exist in a place where you historically were not, about who has what rights in certain safe spaces.

But there, in the crowded fields of Randall’s Island park, I, as a same-sex loving black man, felt that I had space. Space to be. Space to feel. Space to enjoy.

And Frank Ocean, headphones on, eyes closed, projected onto a variety of screens in a slightly gritty, documentary-style Spike Jonze video installation, singing about the “Good Guy” who took him to a gay bar, had ushered in that space presiding over it in the most top billing performance slot of the night.