Have you ever found yourself watching a superhero blockbuster movie at the megaplex and wondered if you were the only one in the theater who got more than a little aroused by all the muscles in spandex? Or maybe you even thought to yourself: Damn, the things I’d like to do with that sexy man (or woman) in that skintight costume?

I am sure you have comic fan or not but for a few of us, the appeal of superheroes runs much deeper. Because for some of us, we want to really get into it with a hero, and for him to get sexual with while we both wear the capes and tights. And this desire even has a name: superhero fetish, and it’s very real.

I’ve had one ever since I got my hands on issues of the Superman and Spider-man comics as a boy. In my teens, I knew that I liked Green Lantern, Wolverine, and Batman beyond the point of mere entertainment. In particular, I loved the covers where the hero was dominated or bound by a brutish villain. But throughout my twenties, I kept these desires to myself and hidden from my sexual partners, even though I was fully out of the closet and proud to be gay in my public life. I had a lot of acceptance in my life, but I still had a second closet that was suffocating a part of me. 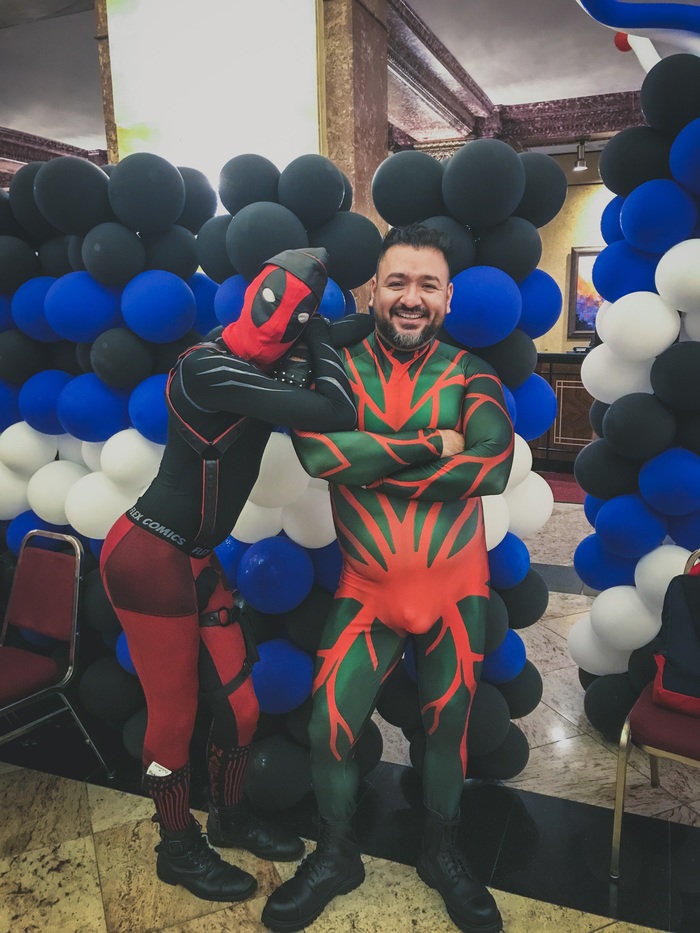 There was no such thing as a superhero themed party, or much less a spandex night at these bars. To me, the superhero gear was just as powerful and seductive as a full leather uniform, but I didn’t dare speak up about my desires at some of these bars.

During this era in the aughts, however, an interesting phenomenon started to happen online. Some fetish websites, like the now defunct Gearfetish, did encourage superhero fetish, even if it was only online or in a chat room. I joined these sites, and I discovered that there were a good handful of guys who were into the same kink for superheroes, but when I attended leather events in the physical world, I was always left wondering: why doesn’t someone take this fetish more seriously? At that time, no one was doing so.

Back around 2005, I met a guy about my age on Gearfetish, who shared my superhero fantasies, and who wanted to meet up with me on his next trip into town. I couldn’t believe that he understood my fetish so well, and at the same time, I couldn’t believe how muscular and handsome he was. I mean, he really wanted to dress up and role-play, and wrestle, and have sex with me? He had the chiseled shape of a superhero, and his dark hair and brown eyes gave him a quality that reminded me of a younger Warren Beatty. My stomach curled into knots as I pulled up to his hotel, and what happened next simply changed me forever. We played, we dressed up, we got sensual, we got rough, and we had the encounter of our dreams.

That meet-up validated both of our fetishes about superheroes, but for me, it was like a star going supernova. That hotel encounter validated my imagination, my heart, and my soul. It was at that moment in which I understood that there was nothing wrong with me or my superhero fetish. In fact, I started to understand then that my superhero fetish (and also its opposite energy of supervillain) could help me learn more about who I am.

In 2012, I was living in New York City, working long hours as an editor, and like a lot of journalists, I wrote lots of fiction on the side. I had already published a book of my short stories in 2010, and I had written three sci-fi and fantasy novels that had not yet been published at that time. That year, I began writing a new series of interconnected short stories about Roland, an unusually feisty but introspective nurse in Kansas City. When I was done with 12 short stories about him, I understood that what I was really writing was a novel about Roland, and not just erotic stories about superhero fetish.

At that point, I decided to publish it as a book titled How to Kill a Superhero: A Gay Bondage Manual. I went on to publish two sequels after that first volume, and the fourth book in the series will publish later this year. I chose a pen name of Pablo Greene to publish the How to Kill a Superhero serieswhile I also published thrillers under my real name Cesar Torres. Nowadays, I publish with pride using both names.

How to Kill a Superhero is like Harry Potter for kinky gay and queer men, and over time, it’s become a cult favorite. It’s not for the faint of heart — my books depict graphic sex, rough sex, and costumed sex. Kinksters and leather communities have become particularly fond of the books, and some of my biggest book signings are at leather events. I am grateful to have met so many sexy and warm-hearted kinksters in all the years I have been writing and publishing the books. And that’s why I am more like Tony Stark than Clark Kent: I don’t mind if you know my alter ego. In fact, revealing my dual identity only helps you to understand me better.

I, with leather community member Brian Bolt Donner, organized POW! The Superhero Fetish Meetup at International Mister Leather, a newly added event on the official schedule, which welcomes newbies and longtime superhero fetish enthusiasts and enables them to meet each other and connect. But there are many other key players and organizers in the scene who are also focused on welcoming people with a sense of openness, sexiness, and a sense of humor.

Jon Maunz from Baltimore is an articulate member of superhero fetish community. He has organized meetups at events like Mid-Atlantic Leather in Washington, D.C.

“I entered the world of superhero fetish probably the same way a lot of people do, being a gay comic book reader,” Maunz says. “Superheroes left quite an impression on me from a very early age. Comics like the X-Men, who were portrayed as outsiders, always interested me. Especially when all the male characters wore skintight spandex and had chiseled proportions. There is always a bit of fetishism in superhero comics. Big muscular guys put on their skin tight leather suits and punch each other. I mean….it’s not subtle.”

Being attracted to the colorful and impossibly skin-tight costumes of superheroes is not all that different from being attracted to the homoerotic art of Tom of Finland or other iconic images of leathermen. Both display heightened versions of the male physique, and they push the envelope of reality into the fantasy realm. The big difference is that the aesthetic of leathermen is informed by uniforms and technology from world wars I and II, as well as photography. 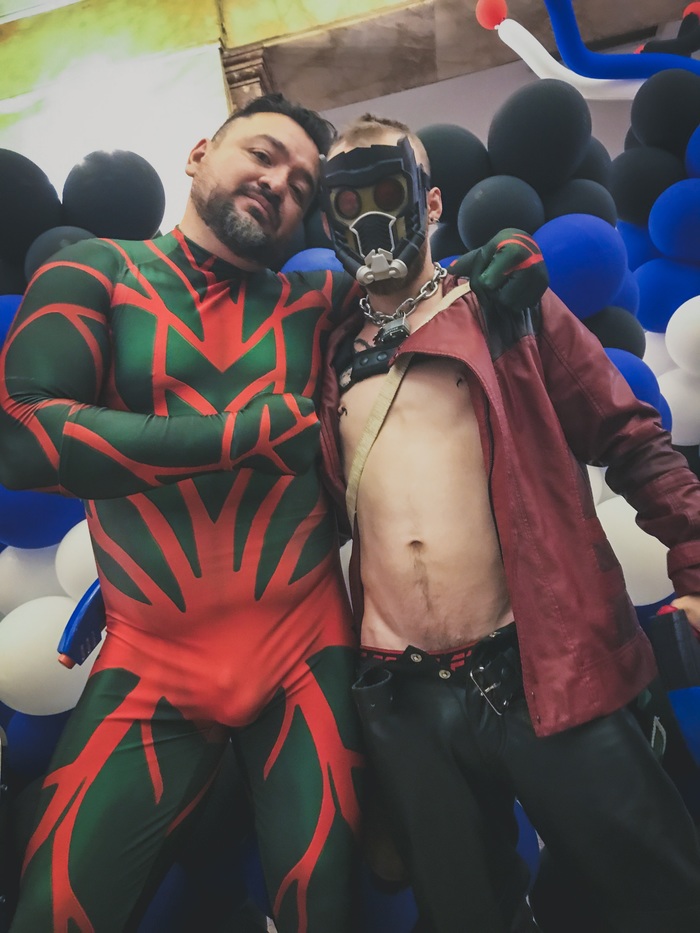 The comic book, on the other hand, was a new printed medium of the early 20th century that was marketed to children. The comic book was considered to be silly entertainment, never serious or with depth. It’s only in the past thirty years or so that it’s been elevated to a new literary status, and I think it makes sense that now, writers and filmmakers, as well as readers and viewers, are able to celebrate exactly how much eroticism comic books have generated, from their very early days. Just picture it — big muscled men in tights, often bound and gagged; Comics created images that are more powerful than most people realize.

Just this past February, the leather contest Leather Pride Belgium launched the first ever title of Mr. Superhero Fetish Europe. The winner was Captain Europe (who prefers not to share his real name). By my count, this makes it the first time in the world that a superhero fetish category has appeared in a leather contest.

“Truth be told, superhero fetish is something I got into by accident,” says Captain Europe.” I got into wrestling a year or so after I came out as gay, so you have the spandex there; I grew up with the 1960s Batman and Robin TV series with all of its homoerotic subtexts; and I guess exploring the two led me to the superhero fetish scene, such as it is. Superhero fetish is a way to let your imagination and creativity run wild, beyond the usual dom/sub role play.”

“The superhero scene in the U.S. is very much separated from the generic spandex scene,” Fairris says. “In the UK the two are inextricably linked. Which paradoxically means [that in the UK] you’ll have the [somewhat socially accepted] cosplay of dressing up as your club’s star player next to the unusual dressing up as Superman in the same [fetish] club night. In the USA, they’re still very much separated. And the acts of getting into character and roleplaying in the public settings are significantly more important in the U.S.”

Right now there isn’t a single place for superhero fetishists to meet, and dating apps don’t have a superhero category to indicate this kinky interest. I run a Facebook group for POW! and though the group is mostly geared toward the event in May, it’s a good place to meet other superhero loving people.

If you’re looking for events this year where your superhero fetish and cosplay will be welcome, I recommend Folsom Street Fair in San Francisco and Dragon Con in Atlanta, both of which will take place in September. Folsom a perfect place for you to gear up and meet other superhero fetishists in the street and Dragon Con is a great place to try out your most daring cosplay, thanks to the con’s geeky element and history of safe spaces for LGBTQattendees.

According to Maunz, the small size of the community shouldn’t stop anyone from finding others who get off on superheroes and villains. “My advice to first-time superhero fetishists is to have fun! Wear a skintight spandex suit out to a leather/fetish night at your local bar. Do DIY cosplay at home or wear it out. Find some like-minded individuals for some fun play sessions to find out what it is you like the most out of this particular fetish.”

Yes, superhero fetish is real, and if you believe in love and imagination, you too can suit up and find new dimensions of your own soul.

Cesar Torresis a book author, journalist and filmmaker. His novels include the thrillers 9 Lords of Night, 13 Secret Cities, and the cult book series How to Kill a Superhero, which he writes under the pen name Pablo Greene. His new documentary film Beyond Built, launched this month on his YouTube channel.