Last week, Betty Who performed to an intimate crowd of followers at Moonlight Rollerway in Glendale, CA. A crowd of influencers and fans showed up in their retro finest to the venue frequented by the likes of Kylie Jenner, Kristen Bell, and Jessica Biel. With local favorite Jon & Vinny’s pizza and Henry’s Hard Sparkling Water circulating the rink, it was a throwback celebration with one of our favorite musicians.

We caught up with Betty Who in her trailer, ahead of sound check. Fresh off her recent tour, she sat down with us to sip some Henry’s while talking all things Britney, Australia, and her queer fan base.

You just got off tour, right?

Yes. I’ll be doing a bunch of shows over the summer and stuff, but no official tour until spring of next year.

How does it feel being in between all that madness?

You know, I love tour because you have a home at least. Even if it’s on a tour bus, in a bunk, it’s still your home. All your stuff’s there. It’s harder when we’re doing shows and we’re not on tour. So, it’s like three days at home, four days out, and that always makes me feel a little seasick. It’s like I can’t ever get my bearings. But I need a break from touring to get excited about it again. So, I’m glad I’m doing that. And the shows I’m doing during the summer, I’m really excited about. But I’m happy to be home, even for like five days.

Do you enjoy doing intimate shows like this as opposed to performing for bigger audiences?

They’re so different, and I like both, I really do. Tonight’s gonna be really fun because Moonlight is like the coolest place ever. And I’ve actually never been here but all my friends always come here. I think there’s a gay night here that all my friends come to. Also, I can’t roller skate, so maybe that has something to do with it. I don’t know. I feel really left out.

Are you not gonna try tonight?

Someone was like, “You should try tonight.” And I was like, “Yeah, but I’ll fall and break my hip, and I won’t be able to perform.” So, let’s come when I don’t have to perform mere minutes after I try roller skating.

I’ll probably break my hip too but yours is much more valuable than mine.

Well, I also have such a far way to go down. I’m 6’2. That’s a long fall. You know what I mean? If I was really petite and dainty, maybe it would be easier. Let’s hope my dancers don’t break their hips while they’re roller-skating.

That’s awesome. So, tell me a little about your partnership with Henry’s.

I’m so happy to be here with Henry’s and we’re gonna have such a nice night. They reached out to me to do this. And the thing I love about them is that I always want to have fun with my friends and go out, but it’s so hard because like my body is my temple or whatever. It’s not really because I have a whole thing of donuts in my trailer, I won’t lie to you. But it’s nice to know there’s sort of a guilt free option for me, to still be able to indulge and have fun and not feel bad about it. So, I’m actually really excited to be here and hopefully get a case or two of Henry’s in my fridge.

You’ve been steadily releasing singles this year. What’s that like as opposed to just dropping an album?

It’s weird. I’m in a very strange position right now where everything is like really new. And I feel like I haven’t been in this position since I was like 19, just starting to make music and do this. So, it’s this very infantile regression that’s going on right now. But as scary as it is, it’s twice as exciting. And I’ve also never been prouder of the music I’m making, so I’m super psyched to do some fun and kind of crazy songs. 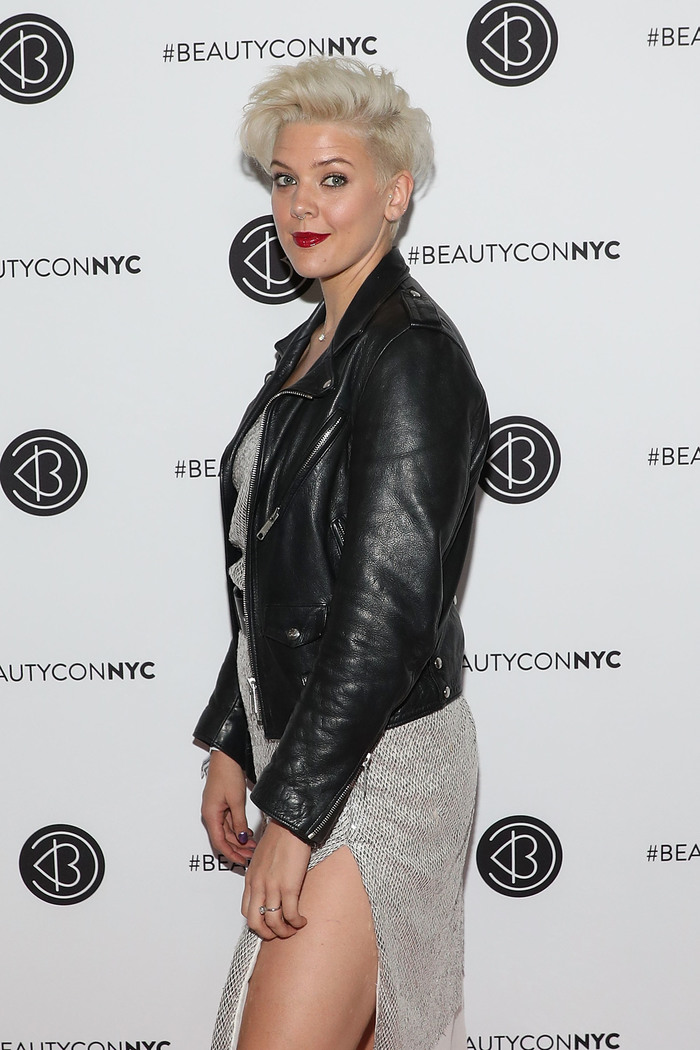 And you’ve also started making music independently. Has that been pretty liberating?

Yeah, totally. It’s liberating, as well as totally frightening, but mostly liberating. It’s so refreshing to be in control of your own destiny. I think everybody wants that for themselves, and I think it’s a rare thing to actually have because everybody has a boss, and when you’re your own boss, that comes with a whole other set of challenges. My responsibility has grown but my freedom to really give what I want to give to my fans directly, that line has gotten so much clearer to me.

You’ve been such an outspoken ally to queer people. How would you describe your connection to that part of your fan base?

I kind of feel like 99% of my fan base is that group of people. And I’m really honored that my life has panned out the way that it has, that this is where I ended up. Because I grew up around really open-minded, non-conservative people. It’s funny because I feel like most people grow up really conservative and move to a big city and they’re like, “Whoa, I’ve never met a gay person.” But I’m the opposite. I feel like I exclusively grew up around gay people and like really liberal people. So, when I moved to America, the discrimination against LGBTQ+ people was such a conversation that was happening, and I can’t believe that anyone feels differently than the way I do. It kind of shocked me and stopped me in my tracks. And when I started making music, it became clear to me that a big part of the group of people coming to my shows were particularly gay men. It was like I was put in this position for a reason, and it’s to be an ally and to be a voice. If you have a voice, you have to use it for something, right?

Being from Australia, what’s it like seeing all the change that’s happened back there over the past year or so?

I don’t spend a whole lot of time there anymore. I live here so much of the time. But growing up there, it was really funny because I never really understood that gay marriage wasn’t legal. My next-door neighbors were like a married gay couple, and I never got that it wasn’t actually legal. So, it was funny when I sort of grew up a little more, I kinda found out how behind the times Australia was, given the culture was so accepting, especially in Sydney. That’s so not a part of what I knew us as a people to be. So, the fact that we’re finally catching up, I’m really so grateful.

That’s awesome. I know you’re a fan of Britney. I feel like you’re becoming that level of gay pop icon.

Oh my god. On the same level as Britney? I doubt it.

I feel like I definitely have a close relationship with the gay community. And you know, I spend a lot of time doing Prides over the summer. I feel like I really put in the groundwork to be the face of an ally. That’s what I want to be. Wow, being a gay icon is like the dream. Are you kidding? I grew up listening to Kylie Minogue. I know all about the gay icons.

And one thing I love about your music is that it just has such a positive energy. How do you keep that when so much negative shit is going down?

God, I know, right? When I made my last record, I wrote a lot of songs. Only 12 or 13 come out on the album, so there are like 50 songs in somebody’s email somewhere that maybe aren’t as positive as all the songs I wanted to be on the record. And I remember at some point, I was sitting down and listening to all the music, deciding what was going to go on the record and what I should really focus on finishing. And I remember thinking, “Who do I want to be? What’s the message I want to send with this music?” Because that’s what it is. It’s a message, and it’s a representation of me in people’s earbuds across the world. What’s gonna bring me honor and joy? And to me, that is making music that people can listen to after a hard day that really makes them feel better. I still write sad songs. I still write what’s real for me, and I still talk about all the hard stuff I go through. But the majority of stuff I want to do and the artist I want to be is to create a safe space for people to go when they’re feeling really shitty and they want to listen to something that will make them feel better. That’s always been my goal, and I had to sort of remind myself of it. When I was sitting down to do it, I was like, “This is what I want, 100%.”