Tatiana Maslany is giving us another reason to call her a Queer Fave. The Orphan Black actress took on a new queer role in the short film Apart From Everything, directed by her best friend, gay actor and filmmaker Ben Lewis.

In the short, Maslany plays Fran, an alcoholic lesbian who struggles to salvage relationships with her ex-fiancee Lana (Tattiawna Jones), and her brother Rob (Sergio Di Zio). The Emmy-winning actress says she actually struggled with the role, as a non-drinker herself.

“Ben gave me three novels to read about alcohol and addiction,” Maslany told OUT. “It was helpful, because I’m almost a non-drinker, and the concept of addiction was something I had to grow to understand. But it’s a very relatable thingit’s so common, yet it’s not spoken about much in our culture. It’s still, oddly, a taboo. And I’ve experienced it within my family and my friends.”

Maslany has played queer before in Orphan Black, winning the Emmy in 2016 for her shape-shifting performance. And even though she doesn’t identify as queer herself, she said she connects to the community because she’s always felt like an outsider, and feeling othered has always drawn her to the queer community.

“Even though I’m not a member of the LGBT community, I’ve always felt a connection there, and a connection to my friends who are queer,” Maslany said. “Most of them are. I feel like they’ve always been part of my support system, and my go-to when I’m feeling vulnerable.”

Lewis wrote the role of Fran with his best friend in mind. The actor and director, known best for his work as Peter on The Handmaid’s Tale, attended a Human Rights Campaign gala where Maslany received the Ally for Equality Award last month.

“It’s an odd thing as an actor to be given an honor like that,” Maslany said of being honored by HRC. “I get to speak all the time. But I want the community itself to be heard. So if I can help to shine any light on that, it’s a total privilege for me, and I’m very aware of that position and what it can do.” 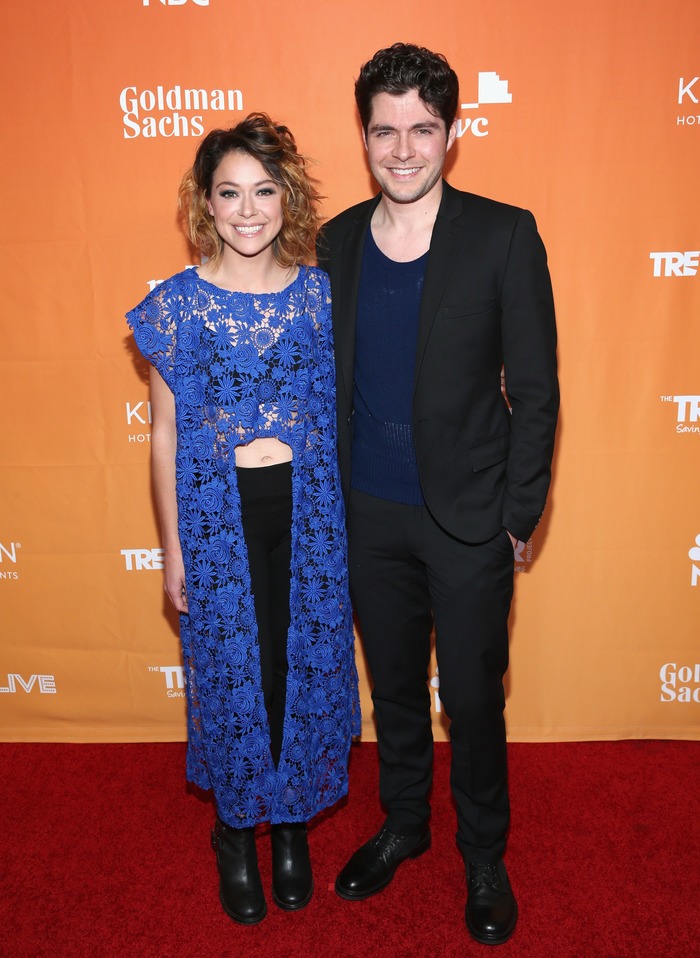 Lewis told OUT that his relationship with Maslany is both fulfilling and inspiring.

“I don’t know if anyone has personally benefitted more from Tatiana’s LGBTQ allyship than me,” he joked, “but the most gratifying part of her success has been watching her use her platform to share that with the rest of the world. I know how much the onscreen representation of her portrayal of Cosima on Orphan Black means to her fans, because it’s how I felt the first time I saw Rupert Everett in My Best Friend’s Wedding. Basically, I know her fans want to see her play gay roles because I want to see her play gay roles.”

The filmmaker also touched on sexual fluidity, as Tatiana’s character is a lesbian, but her ex is bisexual. He said he drew on personal influences.

“I wanted to explore that conflict around Lana’s sexual fluidity because it’s something I’ve experienced in my own relationship,” he said. “My husband Blake has been with women in the past, whereas I have not, and every time he used to bring it up, I’d get very dismissive. I would roll my eyes and make cracks like, ‘What do you want? A medal?’ I realized later that the reaction had very little to do with him, and everything to do with me. I was just threatened.

Apart from Everything debuted at the BFI festival in London last year and has played at festivals all over the world. You can now watch it below.

Apart From Everything from 1415 Films on Vimeo.

Photo by Phillip Faraone/Getty Images for The Trevor Project