I remember seeing her for the first time, rolling across my TV screen in heely sneakers, wearing scrubs and a lab coat, a “super magic smile” plastered to her face and a hypnotic twinkle in her eye. She was blonde, effervescent, and gallingly beautiful. She was intelligent, powerful and presumptuous. She kissed girls in dirty bar bathrooms (and loved it), and was incredibly unapologetic about her lesbian sexuality – as if being openly gay in a professional work environment was completely normal. She lost a leg in a tragic plane crash and had to reevaluate how to be a wife, mother, and surgeon with her new disability.

She is, of course, Arizona Robbins, played by Jessica Capshaw on the award-winning primetime television show, Grey’s Anatomy. 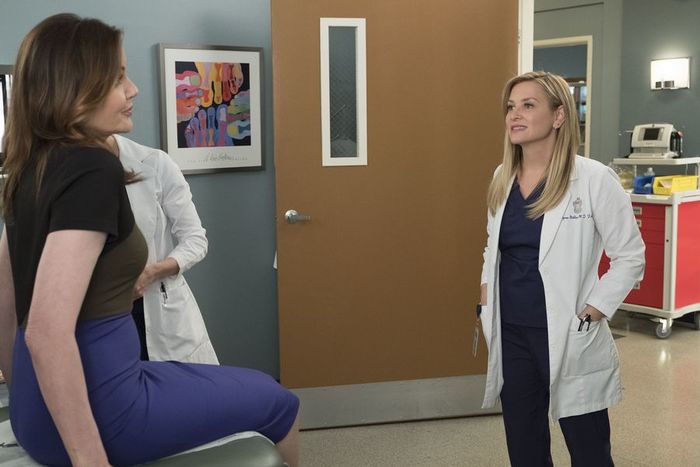 Arizona was introduced in the fifth season of Grey’s Anatomy as an attending surgeon and new chief of pediatric surgery. Capshaw was originally cast to appear in only three episodes. The writers intended for her to become Orthopedic Surgeon Callie Torres’ (Sara Ramirez) next love interest after writing off Dr. Erica Hahn (Brooke Smith) due to what series creator Shonda Rhimes called a “lack of chemistry.” But after winning the hearts of Grey’s fans all over the world in such a short amount of time, Capshaw’s contract was extended and she became a series regular on the sixth season. Similar to Dr. Kerry Weaver on NBC’s long-running hit E.R., Arizona Robbins was Grey’s only openly lesbian series regular, and the show’s only disabled character.

“The characters of Arizona and April are permanently woven into the fabric of Grey’s Anatomy thanks to the extraordinary work of Jessica Capshaw and Sarah Drew,” showrunner Krista Vernoff said to Cosmopolitan. “As writers, our job is to follow the stories where they want to go and sometimes that means saying goodbye to characters we love. It has been a joy and a privilege to work with these phenomenally talented actresses.”

Shonda Rhimes echoed these sentiments about Capshaw and Drew, another exiting cast member.

“Both Arizona Robbins and April Kepner are not only beloved but iconic both the LBGTQ and devout Christian communities are underrepresented on TV,” she wrote on Instagram. “I will be forever grateful to both Jessica and Sarah for bringing these characters to life with such vibrant performance and for inspiring women around the globe. They will always be a part of our Shondaland family.”

When Arizona was written off the show for “creative” reasons, the decision to terminate Capshaw quickly sparked controversy amongst Grey’s Anatomy fans, and especially the fans within the marginalized communities she represents.

Actress Jessica Capshaw responded to the situation on Twitter.

Fans across the internet began to attack Grey’s executive producer Krista Vernoff, who allegedly made the decision to write off Capshaw’s beloved character. Some fans even speculated a possible connection between her firing and series star Ellen Pompeo‘s new $20 million dollar contract. But if you are a Grey’s fan like myself, you know Shonda Rhimes and her writers are partial to writing off beloved characters very often. Still, Arizona’s exit, in particular, is a blow to the LGBT and disabled communities. Lesbian characters on television tend to not last very long and disabled characters are widely underrepresented.

According to the GLAAD Where We Are on TV Report from 2016, 15 series regulars are depicted as having disabilities on primetime television, raising the percentage to 1.7%. Even though the percentage of disabled characters on TV has increased, there is still an alarming lack of representation. GLAAD states, “while the percentage of series regular characters living with disabilities has increased on broadcast this year, primetime programming continues to fall incredibly short in reflecting the reality of this demographic.”

For many millennials and people of generation Z, she was one of the first openly gay characters on a mainstream television show that was accessible for us to watch. We were able to see Callie’s coming out and self-discovery of her new bisexual identity, but when Arizona was introduced, there was no coming out and being a lesbian was part of who she was, unequivocally. For me, this was a big deal. Arizona showed me that I could be a professional, I could be talented and beautiful, and still unapologetically be a lesbian. After the plane crash in Season 8, Arizona became disabled. The disabled audience was able to see someone on television who suffered but in turn, won the fight.

“Arizona’s struggle helped me immensely over the last year,” said Grey’s Anatomy fan Melissa Belvins from Columbus, Ohio. “I was diagnosed with muscular dystrophy a couple years ago. Last year when I stopped working I felt like I lost who I was I had to become a whole different person, with a whole different life. Arizona really helped me deal with that. There is so little representation for the disabled community on TV and seeing her lose and then find herself again was such an uplifting message.”

Arizona made such a huge impact on the Grey’s fandom – some super fans even created Twitter pages dedicated to her character and Capshaw. Jade Spratt (also known as @HeelyQueen) has accumulated over 14.7k followers, most of whom are also super fans of the show. The account has become one of the most well-known Grey’s Anatomy fan accounts on social media. Since the news of the firing of Jessica Capshaw from the show, Jade posted this statement to Twitter: 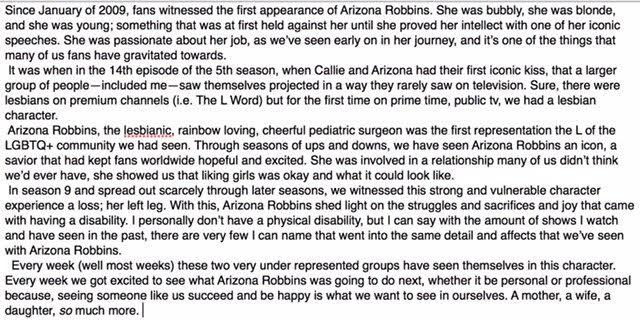 The monumental love and admiration for Arizona Robbins by so many is a testament to how well Jessica Capshaw was able to portray this character. Capshaw’s beautiful representation of the LGBTQ and lesbian community in particular even served as an aid for individuals who were struggling with self-acceptance and coming out.

“Arizona helped me within my coming out process. At first I came out as bisexual because I was afraid of people’s reaction to me being gay and some people didn’t like it so I carried on dating guys. Then I got to the seasons where arizona came into the show and I realized I should get to be happy like that and the people who are there for me are the people who should be in my life,” says Katie-Marie Griffiths, a fan from the UK. “She helped me realize I could be gay and happy without it being a burden. No other character has ever helped me with being gay, so I’m extremely thankful to Arizona and Jessica for this character.”

Grey’s Anatomy fan Ella Pascua from California suffered from major depressive disorder until she saw Arizona on TV. “Nearly three years ago, I had major depression that had caused me to become suicidal and harm myself,” Pascua says. “Later that year, Arizona Robbins heelied her way into my life. She had become the breath of fresh air I needed. Now, I am no longer suicidal and 870 days clean from self harm. She saved my life and I cannot be more extremely grateful for that. Her confidence in herself and her sexuality has helped me to come to terms with my sexuality.”

It remains to be seen how Arizona will exit the show when the Season 14 finale airs tomorrow, and if there’s any potential for her to return in the future. But as for now, fans are forced to say goodbye to a beloved friend, and rare gem of representation.