In February, Netflix’s Queer Eye debuted to gay screams and finger snaps across the globe. The eight-episode reboot followed a familiar format: the Fab Five help disheveled (often) heterosexual men come to terms with living in the modern world. Jonathan Van Ness took care of grooming, Tan France was our fashionisto, Bobby Berk hammered in the design, Karamo Brown gifted culture, and Antoni Porowski was all things food and wine.

The series became a springboard for the men’s personal brands, helping spotlight their careers and finely-tuned talents. The internet, being the obsessively capitalist space that it is, took no time in ranking the men from worst to best, with results showing Tan, Jonathan, and Antoni as our three most desirable GBFs. A dive into Google’s top trends supports this classification, as Jonathan, Tan, and Antoni continue to dominate Google search results since the show’s debut, with Antoni positioned in the collective lead. Analysis from BoardReader, a tool allowing you to search and compare how often something (or someone) is referenced in online forums, message boards, blogs, and other news sources, also situates Antoni as the most buzzed about Queer Eye star. The results show that from all Queer Eye specific mentions of “Antoni,” “Jonathan” and “Tan,” Antoni’s name features in 42.3% of content.

Antoni has also come to collect the most media attention, scoring a feature in GQ, the cover of Gay Times magazine and his very own book deal. Many publications and queer periodicals have come to describe him as Queer Eye’s “breakout star.” But if you’ve come to spend any time on Twitter, you’ll quickly discover he’s also the most controversial of the Fab Five with Twitter threads, fistfuls of memes, and think-pieces circling on whether he can actually cook. His qualification for being the show’s Beyoncé is therefore seemingly less about talent, and perhaps more about the fact that he’s really, really, really good looking. Smoldering dark eyes, a cheeky yet endearing smile, and a stomach so chiseled it could easily be used as a mold for a waffle iron it’d be difficult to deny Antoni’s Abercrombie & Fitch magnetism. 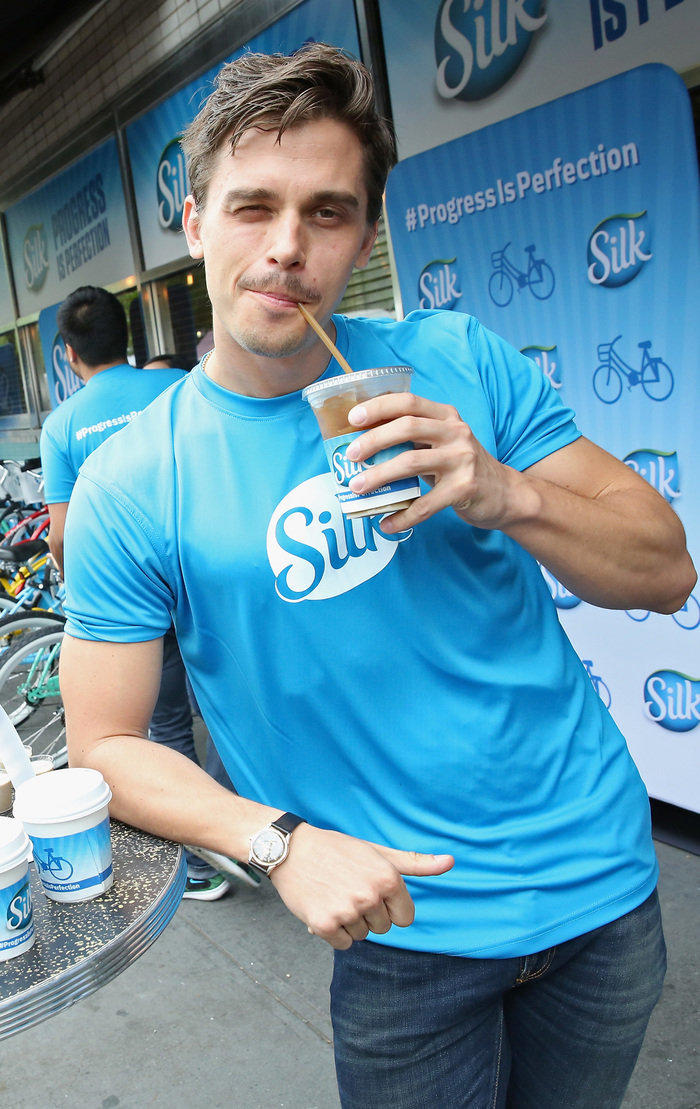 Now this isn’t to say that conventionally attractive people don’t also carry a girthy spectrum of talents alongside perfectly groomed features. People aren’t uni-dimensional, or made to be reduced to a single trait or facet. Antoni truly seems like a lovely guy. His culinary pursuits are suggestively conservative (guacamole, skewers, mac and cheese) but they fit the brief. Complicated dishes would be wasted on Queer Eye subjects who are required to reproduce the recipe by the episode’s end. There is, undoubtedly, more to his craft than a single slice of American cheese.

So no, it’s not to say that hot people aren’t talented, but it’d be hard to argue that they don’t tend to garner a disproportionate amount of attention in relation to their merit. The fact that we’ve seen far more of Antoni the “breakout star” over any other member of Queer Eye exposes not only our indifference to meritocracy, but also which bodies are given a seat at the dinner table.

It further exposes what our culture has come to prioritize. Living in the age of the thirst trap, we tend to publish revealing and sexualized content some butt, those abs, “it’s leg day!” in exchange for high praise among Insta-friends and Twitter-fam alike. There’s nothing inherently wrong with this: it’s a symptom of a sex-positive culture celebrating sexual desire, bodies, and a perceived idea of self-love. This is especially important to the queer community, whose sexual identities, behaviors and choices have been historically denied via a sweep of institutions (medical, religious, legal, government). The modern celebration of a queer body isn’t just boner-material, it’s a political act.

It is, however, worth considering how our thirsty celebrations collide with our daily use of social media. Twitter was created as a platform for the dissemination and sharing of ideas. Good content generates more shares, likes, and a healthy followership. But this premise is disrupted by thot posts and thirst traps, where the quality of content is less concerned with ideas and discourse, and more interested in aesthetic and appearance. It’d be naive to argue that any object keeps to its creator’s original intent (hell, the door in Titanic made a pretty decent life-raft for one lucky survivor) but it’d be dangerous to ignore the way in which levels of attraction can now predict or buy social clout.

It’s additionally important to interrogate the types of bodies we celebrate in our community: which bodies are accruing the most cultural currency? If we look to our breakout star, Antoni, the answer is clear: white, masculine, muscular, handsome. While we enjoy telling ourselves that our community actively champions body diversity the crude reality is that white, muscular, masculine and handsome men still hold the hegemony and power in our culture. A quick glance at Gay PornHub’s most viewed can confirm. Again, there isn’t anything inherently wrong with desiring a muscular build I personally find the discipline of it all pretty darn impressive (much like believing in a religion or a monogamous relationship) but it becomes dangerous when a specific body type holds disproportionate power and influence over a community’s expectations and desires. 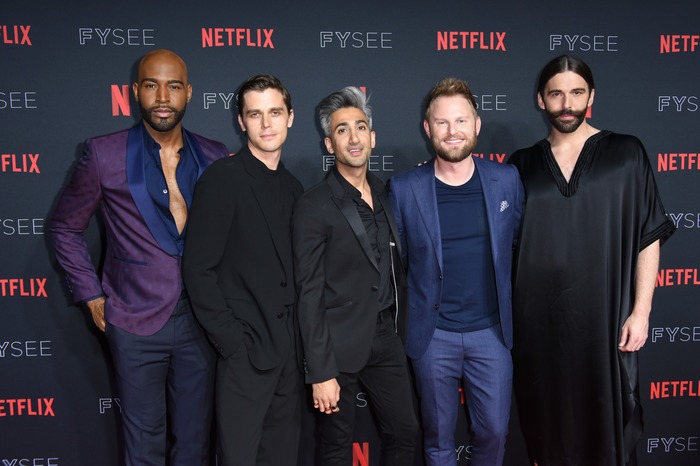 The white muscular gay man becomes not only who we’re taught we want to be or who we want to be with, but also whose ideas we’re steered towards in our social age. Because how do we successfully navigate our political and social discussions when it’s clouded by these socialized desires?

The muscular gay man also finds a buff entry in queer history. The 1970s, amidst the continuing rise of the LGBTQ movement, saw the popularization of the Castro clone: gay men dressing and styling themselves as the idealized working-class man. This more rugged representation of gay men’s identity was used as a celebration of their masculinity, all the while combating old fashioned stereotypes of their identity’s apparent femininity and camp.

Modern intersections of both class and race problematize the gym gay ideal even more. Accessibility and affordability of both gym memberships (Equinox is really expensive) and nutrition (is there any good produce in NYC?) have made the modern buffed body a symbol of affluence. Whereas for men of color being considered masc or boasting a gym-bod is typically the exclusive entry point for being considered desirable or attractive in the wider queer community. Yet even the attainment of a muscular build doesn’t guarantee the same level of white-bodied success. Our culture connoisseur, Karamo, was perhaps the most famous of the group prior to the show’s airing (he was the most Googled of the Fab Five in 2017) and, like Antoni, he isn’t one to shy away from the occasional thirst trap. Yet the combination of his preceding popularity alongside his extremely obvious sexiness, doesn’t hold a torch to the “Antoni effect.” Why is he considered less of a “breakout”?

Whenever I happen to pose contrapposto, I partner w @Hanes and wear my Comfort Flex Fit Boxer Briefs – they keep everything where it should be, comfortably. #Vouchforthepouch w me thru link in bio ✌🏽. 📸@jkrietemeyer

The depoliticization of our sexual desires the unwillingness to ask why we’ve come to favor and give privilege to certain bodies masks the insidious racism, fatphobia and femmephobia we’ve socially internalized. After all, typing out, “it’s just a preference” is much more comfortable than holding a mirror up to our culture’s flaws.

When we step outside our queer identities we quickly learn how much we’ve come to prioritize aesthetic and appearance in the maintenance of our social order and privilege. The popularization of gay tribes the sorting and identification of men based solely on physical appearance (twink, jock, daddy, bear, otter, cub, the list goes on) provides an under-the-hood glimpse behind the operations of our identity. To reiterate: none of this is inherently wrong. But when specific bodies (read: abled, white, muscular) come to hold a disportionate amount of privilege relative to their respective merits or talents, it’s time to hold that critical mirror up a little higher.