After a quick hiatus from the Versace clan, Edgar Ramirez’s Gianni and Penelope Cruz’s Donatella return in this week’s The Assassination of Gianni Versace: American Crime Story. They’re still very much the secondary plot; the primary focus shifts to Darren Criss’ Andrew Cunanan and his first victim, Jeff Trail (as played by Ryan Murphy favorite Finn Wittrock). We see their first meeting at a gay bar, their quick friendship, and Jeff’s life lived in danger as a gay man in the military.

The title of the episode is “Don’t Ask Don’t Tell,” named for Bill Clinton’s infamous, unpopular policy to keep gays in the armed forces closeted. It’s obviously a reference to Jeff’s life as a Marine. But in some ways, it’s also a reference to Gianni Versace himself, who we see preparing to come out in an interview with The Advocate. Donatella would prefer her brother hew to the policy: She worries his coming out will jeopardize not only the brand, but his status in culture.

And so the two plots come together in dual interviews, which director Daniel Minahan cut together during the episode’s denouement. While Gianni talks to The Advocate, Jeff talks to a news magazine about Don’t Ask, Don’t Tell albeit while disguising his identity. The treatment of their coming out interviews couldn’t be more different: Gianni talks in a luxurious hotel room with his partner, Antonio D’Amico (Ricky Martin), by his side. Jeff talks alone, shrouded in shadow, in a cheap motel room.

The show presents two men, baring their souls in very different ways, to highlight their differences. But what ultimately works best about the episode is how it depicts coming out as a core, base act, and the circumstances around it as what changes the experience.

For Jeff, this coming out is a conditional one. Yes, he’s speaking about his experiences more honestly than ever. But he’s also an unknown to those he’s coming out to on television. They’ll know him only as a shadowy soldier, not a specific person. He’s revealing himself under a certain level of cover, a double-edged sword that provides him both protection and keeps him from being completely honest, and thus earning the catharsis that comes with such a reveal.

Compare his experience to Gianni’s: He’s known by everyone. Versace is a name this interview will reverberate and help change his reputation. Donatella is right to worry; the ‘90s were a different time, and Gianni’s coming out is a major risk. But with that comes a chance to be truly honest, to free himself from the chains of the closet.

To be more known is to risk more, but to have a name is to feel true release. It’s no surprise that Gianni’s interview is presented as a clear triumph, but Jeff’s is played as a more ambiguous emotional beat. 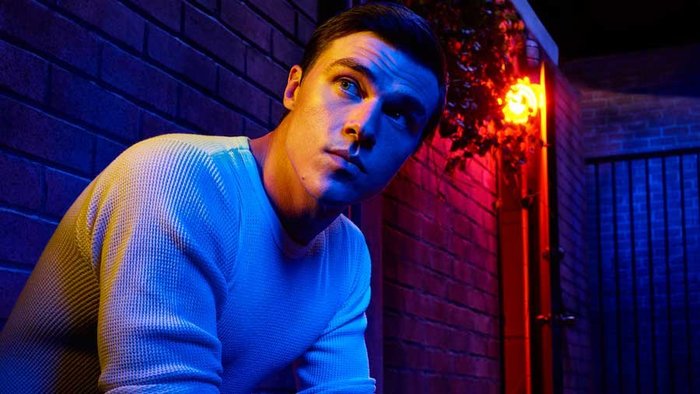 There’s an additional element here, one I haven’t yet talked about in these essays: Gianni Versace, an Italian man, is being played by Ramirez, a Venezuelan actor. Historically, Gianni was not Latino. But as depicted on this show, he is, further deepening the visual divide between he and Jeff, particularly in a period story presented in 2018.

Obviously, this affected little in Jeff and Gianni’s real lives, but it’s an interesting payoff of the Ramirez casting. In the modern world, an attractive white man like Trail would be not only celebrated, but thirsted after heavily. A Latino man, by sole virtue of not being white, would come under far more scrutiny and fire during his coming out, especially online.

Of course, thanks to Cunanan, neither man lived to see this modern world to see how coming out changed things. But it’s not an exaggeration to say that both of their coming out stories likely affected history: by Gianni being visible, and by Jeff helping raise awareness about Don’t Ask, Don’t Tell.

The sixth episode of The Assassination of Gianni Versace: American Crime Story will air Wednesday, February 21, at 10 p.m. on FX.