All season long, The Assassination of Gianni Versace: American Crime Story has filled in blanks. Why did Andrew Cunanan (played by Darren Criss) become a spree killer? Why did he kill Gianni Versace (Edgar Ramirez)? Why did he kill David Madson (Cody Fern)? Creator Ryan Murphy and writer Tom Rob Smith have used a blend of what we know and some fiction to weave a compelling narrative one that gave us a much more challenging series than we first expected.

But The Assassination of Gianni Versace hasn’t contented itself with examining Cunanan as a killer; it’s also fascinated by Andrew the gay man, and all that led to how he became himself. Wednesday’s penultimate episode of the season took that train of thought to its organic conclusion, introducing us to Andrew’s father, Modesto Cunanan (Jon Jon Briones). 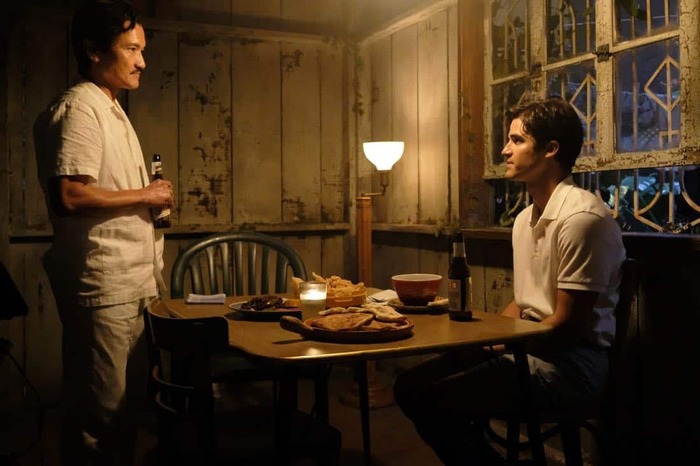 Modesto, like his son, is an impressively persuasive fabulist. He talks his way into a high-powered job on a lack of experience and a lot of charm. He moves his family into a neighborhood and home beyond their means, convinced he can build them the American Dream he (an immigrant from the Philippines) so desperately craves.

For a while, it works, just like we’ve seen Andrew’s plans briefly succeed. But soon enough, Modesto is committing major fraud crimes just to keep his American Dream afloat. When it all comes crashing down on him, instead of owning his errors, he flees, leaving his wife and children to deal with the consequences of his actions.

Briones is nothing short of fantastic as Modesto, winning the audience over just as much as he does the people he meets in the show. He’s so damn determined and positive, you can’t help but put faith in his mission. It helps that he’s crazy about Andrew, supporting him and making him feel loved.

Then you see Modesto verbally abuse his wife, and ignore his other kids to fully pin his hopes on Andrew. You see him take the cowardly way out after he’s discovered. And you see him later in life, when Andrew goes to meet him in the Philippines as a teenager, expressing no remorse but plenty of anger. It’s in that moment that you can feel the Andrew Cunanan we know now being formed. His father, perhaps the only man who truly expressed love for Andrew, can’t take responsibility for his crimes, and instead rages out at his son for daring to question him.

Maybe there was no saving Andrew Cunanan, no decision in his life that could have stopped what was coming. Maybe this is all a fable American Crime Story is telling us to feel like our lives are more in our control than they actually are. But in that moment, it feels like Modesto could have stopped what came after by teaching his son a lesson: that pathological lying and deceiving people have consequences. But he didn’t.

There’s a terror in the relatability of Andrew Cunanan’s story. A complicated relationship with his father. A need to feel validated by the world. A thirst for the fabulous things in life. An insecurity with the things we actually have. A desperation to be loved for how we look to the world because we’re too ashamed of who we are. Murphy and Smith’s greatest trick with this season was making a spree killer’s story strike so close to home for gay men.

I’ve not seen the finale of this miniseries it was the only episode not furnished for critics ahead of the season premiere but I find myself both eager and nervous to find out how this story ends. Not because I don’t know what happens; the hunt for Cunanan will end, as will Cunanan’s life. There’s no surprise in the straightforward narrative of it, which is perhaps why Murphy and Smith presented Cunanan’s life in reverse, to give viewers the feeling of unwrapping a package versus taking a road trip to an obvious destination.

Despite that lack of suspense, I want to know how this story, in this particular presentation, comes to a close. I want to see the full realization of The Assassination of Gianni Versace’s thesis. I want to feel some measure of closure with Cunanan, to walk away from this miniseries enlightened not just about his motives, but about how he became the man he was.

Judging from everything we’ve seen thus far, the finale should be a devastating experience. But hopefully, it will also be an enlightening one.

The season finale of The Assassination of Gianni Versace: American Crime Story will air Wednesday, March 21, at 10 p.m. on FX.