Jane (Katie Stevens) is at her worst. Fired from Incite, and unable to go back to former boss Jacqueline (Melora Hardin) at Scarlet magazine to beg for her job back, she tries the only thing she can: chipperly powering through unemployment to fix her situation. Unfortunately, throwing your former publication under the bus on live television doesn’t exactly endear you to potential employers.

At the behest of her best friends Kat (Aisha Dee) and Sutton (Meghann Fahy), Jane finally does go back to Jacqueline. She admits she made a mistake leaving Scarlet, loves the publication, cares about Jacqueline, and wants to come back. And as I predicted last week, Jane will find her way back to Scarlet, and the Incite storyline will come to a quick close.

Except, to my legitimate shock, that’s not what happens. Unfortunately, Jacqueline tells Jane, her salary was reallocated, and Jacqueline no longer has the money to rehire Jane. But can’t she just get more money, Jane asks. Jacqueline gets what she wants, after all. Jacqueline admits she probably could. But she won’t.

“You have some growing up to do, Jane,” Jacqueline tells her former employee. “You need to live in this failure. You can’t be afraid of it … You just lost your job, so you wanna feel safe. And you think that, if I fix this, everything will get right back on track. I know this is not what you wanted to hear, but this is going to be an invaluable learning experience for you.”

Jacqueline is my favorite character on The Bold Type, largely because of Hardin’s performance, which is such a fascinating mix of a stern exterior and warmth at her core. But I also give credit to the conception and writing of the character, an older woman at the top of her professional game who sees her young employees as mentees, not rivals or competition. She’s not Miranda Priestley. She cares about more than just the magazine: she cares about the people making it.

That’s why denying Jane is so powerful: It’s not a petty decision. Jacqueline isn’t mad at Jane for leaving, nor does she harbor any resentment for the way Jane framed her decision as one of needing to grow. In fact, she agrees: Jane does need to grow. But she can only do that by living in the failure she’s created for herself. Is it harsh? Perhaps. But it’s harsh out of love and care. It’s an opportunity to teach Jane a lesson that she wouldn’t learn otherwise. It’s perfectly Jacqueline: tough, but ultimately fair and loving.

On top of that stunning final scene, Jacqueline actually gets a story of her own this episode. I didn’t mention it last episode, but after Jacqueline turned down a seat on Steinem Publishing’s board, she met the board’s second choice: Cleo (Siobhan Murphy), a fitness magnate with business acumen for days. The reason I didn’t was because I figured it a one-episode-only plot, wherein Jacqueline realizes turning down opportunities means having to face the consequences of bringing someone else in. That is indeed the story, but I misjudged the time; Cleo quickly proves herself a thorn in Jacqueline’s side, manipulating the otherwise-all-male board into killing a body positivity piece that contradicts her fitness-first philosophy.

Never the one to be outplayed, Jacqueline revives the letter from the editor (thanks to some prompting from Sutton), and writes a letter about the very subject Cleo wanted punted from Scarlet in the first place. It’s clear that this duel is going to last for much of the season, which delights me. I could watch Jacqueline figure her way out of dilemmas all day long. 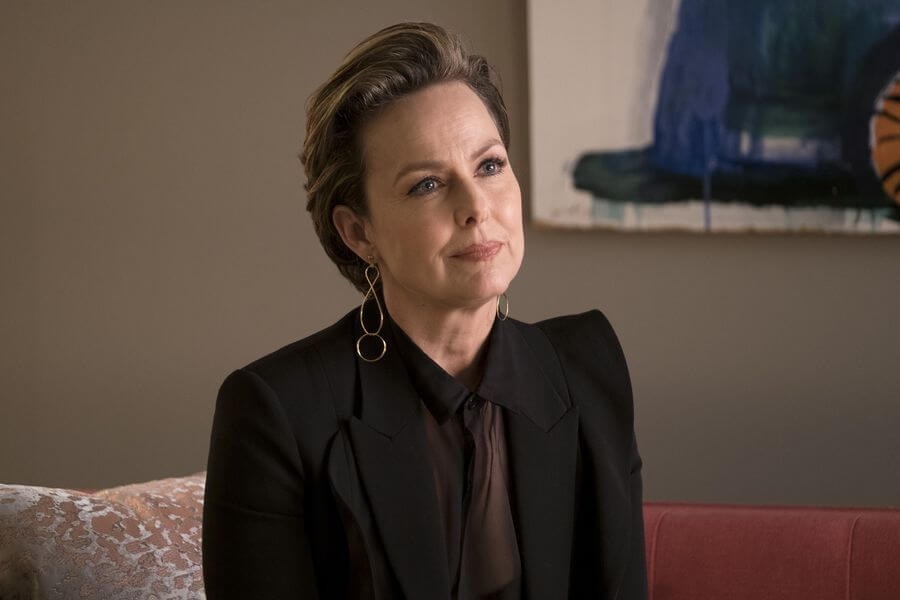 Kat and Sutton share a story this week, which is unfortunate only because it’s a less interesting one. Sutton needs to hire a photographer for an accessories shoot, so Kat pressures her to hire her girlfriend Adena (Nikohl Boosheri). See, Adena is without a gallery, but needs to show her work somewhere to qualify for her visa. Scarlet is one such place. But Adena’s work is largely political and journalistic, not product photography. Sutton is uncomfortable, but decides to go with Adena as a risky-but-bold choice.

This causes some conflict on set, as Adena wants to get away from Sutton’s original idea (jewelry on candy) for something more artistic. Sutton talks shit to Kat, and Adena overhears, but she just goes to apologize to Sutton. It’s all a run-around to get to scrapping the idea entirely for something new: the jewelry on our core three girls, emphasizing their curves and imperfections in the photography. Sutton’s boss loves it; Adena gets a great spread in Scarlet. It’s a win-win, which is pretty snoozy from a narrative perspective. But I love seeing Sutton thrive, so it’s still enjoyable. There’s something about the way Fahy’s face lights up upon getting good feedback that’s irresistible. You just want to jump through the screen and take a victory lap with her.

“The Scarlet Letter” shows Sutton at her peak and Jane at her valley. What’s impressive is how it makes both dramatically satisfying. As The Bold Type progresses, it’s growing more and more confident in itself. It gets bolder (sorry) every week.

The next episode of The Bold Type will air next Tuesday, June 26, at 8 p.m. Eastern on Freeform.