The Boston League of Wicked Wrestlers’ 14th-anniversary show began with a rousing lip sync to Beyoncé’s “Run the World (Girls)” performed by the effervescent bearded drag queen JP Delgado Galdamez. Queer gender performance and feminist empowerment are not exactly a common feature of a wrestling showin fact, wrestling culture is routinely accused of perpetuating sexism and racism that runs deep in its patriarchal historybut for BLOWW, opening with something so explicitly opposite to mainstream wrestling culture is exactly the point.

AtBell of the Ball: A Wrestling and Drag Extravaganza, the women, trans, and non-binary wrestlers proceeded to unleash a powerful and playful feminist version of the athletic art form. BLOWW seems to build itself on the belief that instead ofrejecting that which is repressive and seemingly not intended for us, we should really just fuck with it completely.

“I consider wrestling to be a beautiful matrimony of drag, gymnastics, and theater and because of wrestling’s place of this hyper-macho, stereotypical, all-American art form, it’s really fun to be subversive with it,” says BLOWW member Heather Mack. Mack’s character Pammmmmmmmmmmmy (“With 12 m’s, half of them are silent, you get to pick which ones”) is part of a tag team with her “totally platonic life partner” Cherrill, whose talents include bargain (or “bahgain” if you’re from their suburb in Massachusetts) hunting and huffing extra-hold hairspray.

All of the characters in the league play on archetypes of qualities they work to reclaim.

“It’s all about taking these narratives that have been imposed on us by society and getting to re-write them,” Mack tells INTO. “A lot of our characters embody pieces of ourselves that we were marginalized for or made fun of, or have some sort of trauma around. And we’ve turned those into our biggest weapons. Our armor and our strength come from that background.”

At the 14th anniversary performance, which takes place in a basement theater in Somerville, MA, Pammmmmmmmmmmmy and Cherrill are adorned in leopard print spandex and fanny packs. These costumes work as both an homage and a poke at the working-class aesthetic they grew up part of.

Ahna Zai says she uses her character, Meathead Marla–who dresses like a gym-jock and carries around a barbell everywhere she goes–to challenge conceptions of femininity.

“Marla personifies female power,” Zai says “Most anyone would look at her as very masculine. But I maintain that that’s not the case. Everything about her is feminineit just so happens that her femininity is dependent upon presentations that are coded as definitively masculine. I appreciate being able to personify that kind of power and physical strength in front of audiences.”

Thinking critically about gender is central to BLOWW’s mission. A year ago, the organization underwent a shift in leadership and rebranded from Boston League of Women’s Wrestlers to the more inclusive Boston League of Wicked Wrestlers.Mack explains that when some wrestlers came out as trans and non-binary, she and the rest of the league knew the change was necessary.

“We should absolutely be more expansive in the way that we think about what we do,” she said.

Tom Mackie, whose character is called The Rat King, said that as a trans person, he didn’t think he had a place in wrestling until he found BLOWW.

“It’s queer-friendly and it’s friendly to wrestlers of many different gender identities,” he tells INTO, “and I don’t have to worry about being around giant men that I don’t know how to wrestle.”

“In modern day wrestling, trans people, fat women, anyone who isn’t looking like they could be on a Sports Illustrated from 1994 doesn’t have a voice and doesn’t have a presence,” Cherrill says. “So we are here to defy a genre that is historically very transphobic, and sexist and toxically masculine. We are trying to do the exact opposite, and in doing so we have created a family that really cares about each other.” 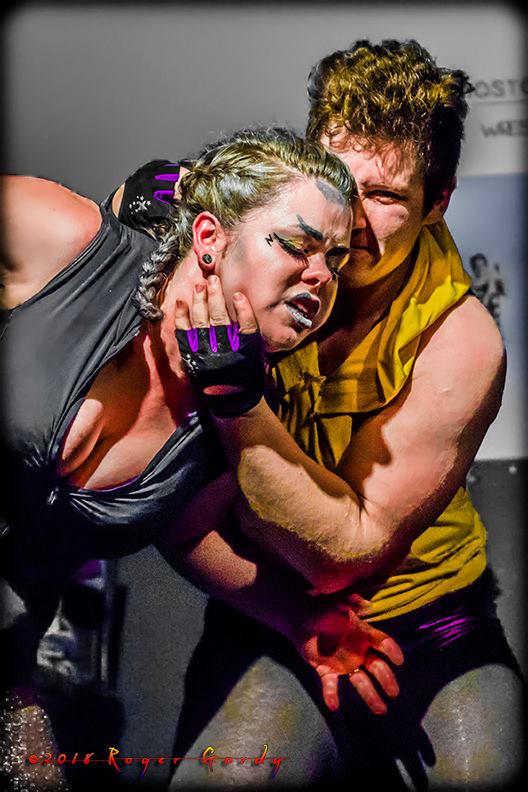 Jenelle Valencia, aka Valentine, tells INTO she’s been a long-time fan of wrestling but felt similarly excluded.

And Valentine bosses everyone around in the wrestling ring. Her costume consists of a black T-shirt, black hot-pants, ripped fishnet stockings, and black lipstick. Prior to her entrance on stage, a menacing video plays of her with her tag teammate, Incogneato. They are set to wrestle Cherrill and Pammmmmmmmmmmmy, and it’s clear when Valentine threatens their beloved department store, that she’s out for blood. Once the two teams are in the ring together, their styles of fighting create a delightful and hilarious contrast; Valentine and Incogneato come at Cherrill and Pammmmmmmmmmmmy with a fierceness that suits their dungeon-play dynamic, whereas the other team fights with mockery and excess (excessive jokes, excessive rage, excessive body slams, and so on).

The wrestlerswho have performed in theaters, bars, and music hallsoccupy these spaces theatrically, obtrusively, and without apology.

“I came into wrestling because I wanted to show my body on stage, and I tried burlesque, but when I got into wrestling and I was like, ‘This is where my body belongs’ in a place where [we’re told] it doesn’t belong,” Incogneato says.

But BLOWW is more than a club to talk about things you might discuss in a women’s studies course. These wrestlers are employing the same kind of athletic ability you’d find in any traditional wrestling ring. The group practices twice a week in a shared studio space in Allston, Mass., learning dexterity, strength, and complicated gymnastic moves from what Mack describes as trauma-informed, inclusive wrestling teachers. This means practices are designed to center consent (wrestlers always ask permission before trying a move on their partner), and also that every body type and ability is treated with respect. But the end result is still as raucous as a WWE fight, including dropkicks, suplexes, and backbreakers. 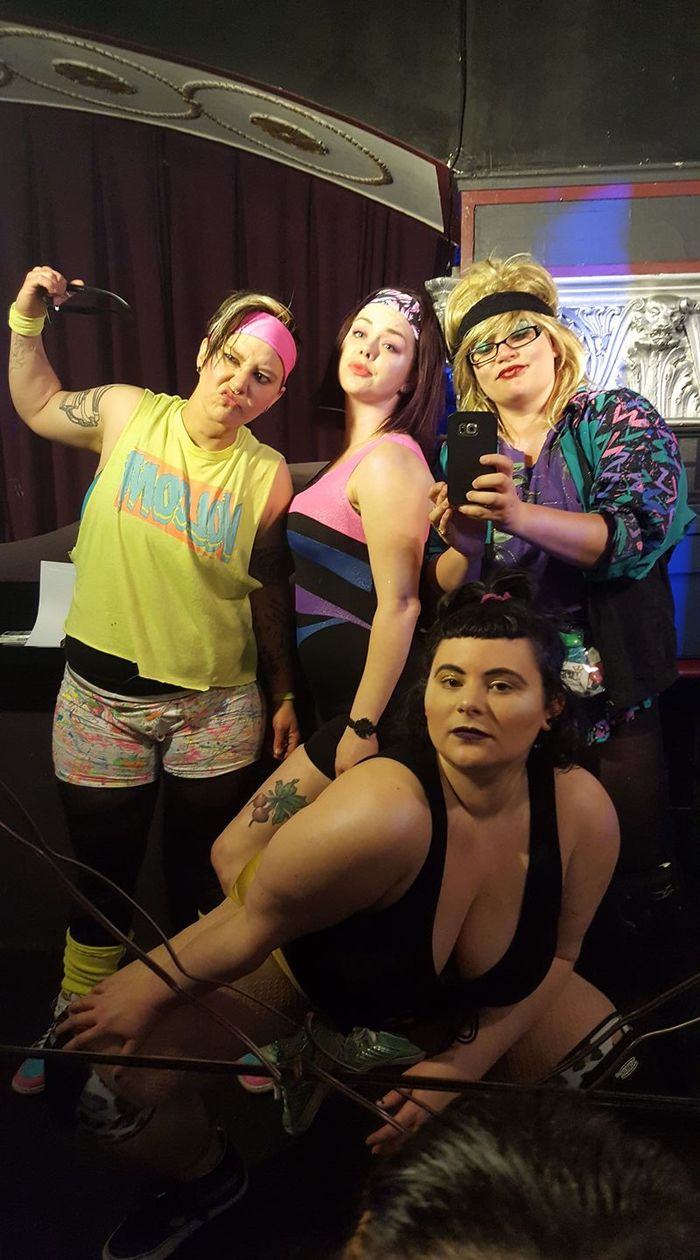 “Reclaiming the concept of violence is significant to me. I love playing with and feeling powerful in response to something we’re usually afraid of,” notes Jeanne Mansfield LeClair, aka Susie Newsie, a wrestler with a mission to inform us on current events because, as she shouts in her tagline, “DEMOCRACY DIES IN DARKNESS!”

The (reclaimed) violence and physicality of BLOWW requires a culture of comfortability and, in order to be thrown around, the wrestlers need to feel safe in the group, and that kind of safety and trust is paramount to its success.

Cassidy Spiess, aka Krystal Ora, (whose iridescent bodysuit is complemented with handmade, knee-high, fringe-covered boots), explains that the intention behind the organizers who revamped BLOWW’s mission to be inclusive and feminist was fundamental to her involvement.

“I’m not sure if I would have joined or felt comfortable being a part of this before they completely reimagined it,” Spiess says. “But now it’s like a stumbled into this dream of a thing I didn’t quite know I was looking for until I found it. I look up to the more experienced wrestlers so much knowing that they created this amazing mission and supportive environment.”

Aposhian says similarly that what’s most important to her about BLOWW is “having like-minded people who are there to catch me if and when I fall, in every sense of the word.”

Even when, physically, they are being tossed around by one another, the members of BLOWW describe a ubiquitous feeling of being held. 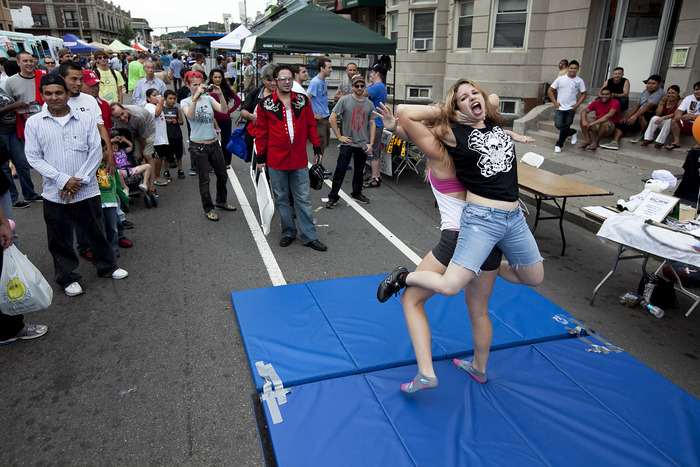 The care and support the league fosters (so counter to the messages promoted in mainstream wrestling) is evident to everyone who sees one of BLOWW’s performances. The wrestlers are not only having fun with one another, but they are, even in the midst of battle, supporting one another.

I asked some of the wrestlers if they think they are converting any mainstream wrestling fans to become feminists, or if they are more invested in catering to feminists and queers who want their own version of the sport. Most agree that a BLOWW show would be persuasive to an average wrestling fan, but that their audience consists primarily of people who come out for both the wrestling and a love of feminist subversion.

When I talk to her in the dressing room, Incogneato taps the tube of black frosting she’ll use to spread around her teeth in the show. It’s a method of intimidation.

“There is a lot to be done, and whether or not we change WWE sometime soon or we just exist as who we are and everyone comes over here instead,” she says. “That’s amazing.”