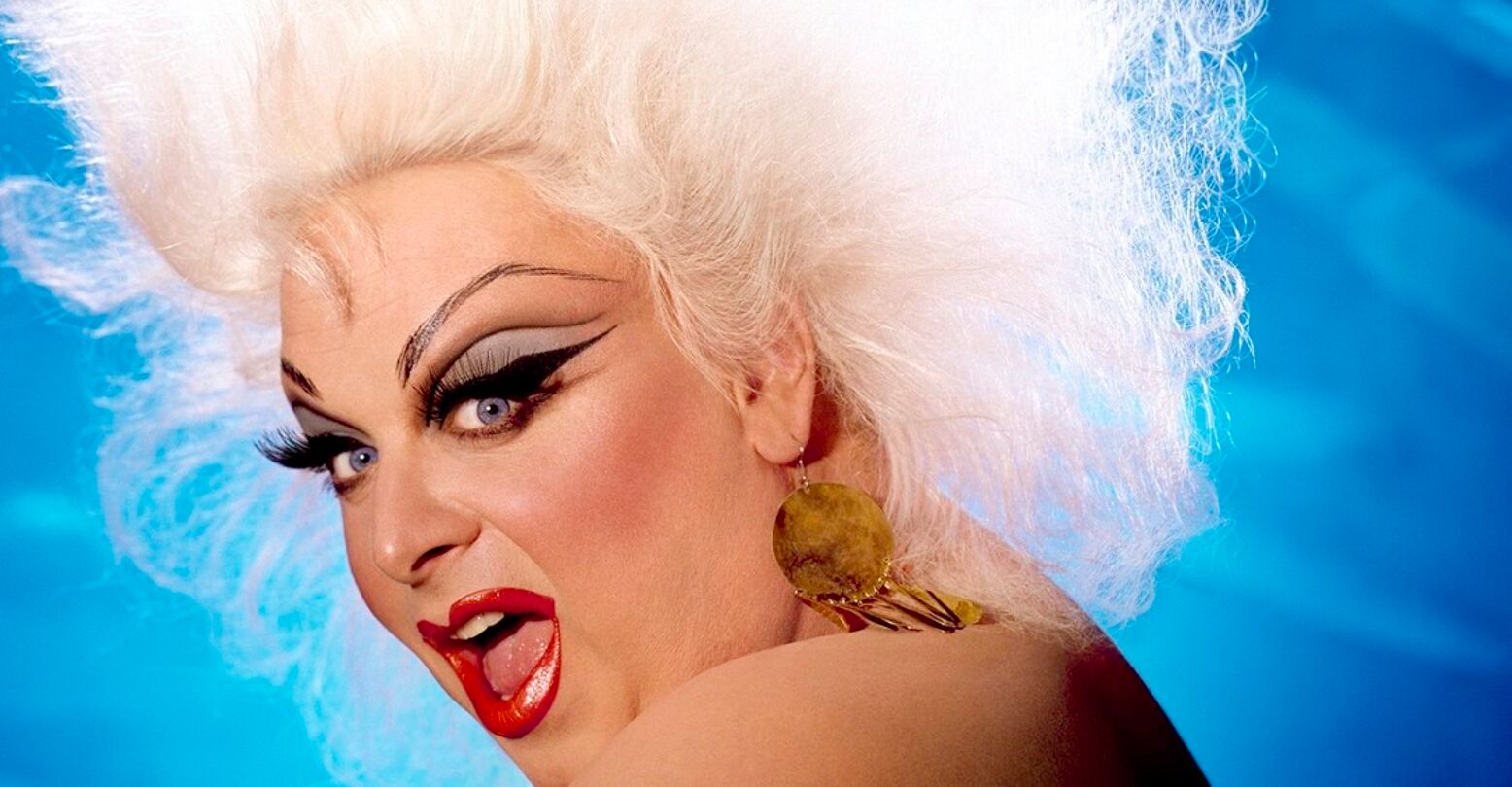 I came to Divine late — embarrassingly so. Until frighteningly recently, I hadn’t seen any of her films, except for Hairspray, which I remember watching almost on a loop for a year in 1998 when my grandfather died. Until recently, I’d only known of her as an idea, something I instinctively felt aligned with. But I didn’t know anything about her. In the past year, I’ve started to learn.

It seemed the mainstream commodification of Divine began in 2018, after a Kat von D makeup palette launched in the spring, using Divine’s face and image to sell the product. This corresponded with the announcement of Criterion Collection’s release of Female Trouble, the legendary John Waters film featuring a star-making performance by Divine as Dawn Davenport, a rebellious teen turned career criminal turned acid-stained performance artist screaming in the electric chair. Divine, it appeared, was finally ready for the mass market.

It’s not surprising that the image of Divine entering the mainstream should give some of us pause. I enjoy the idea of an idol who’s completely indigestible in the mainstream, especially in an age of RuPaul and bachelorette party-infested gay bars. Creating an emblem of vicious, lethal womanhood, consisting of overlarge, frightening features, desperate acts, who inhabits the body of a woman of size in a way that’s unabashed and powerful, is incredible. When that image becomes adopted by communities that don’t exactly go out of their way to embrace the most radical ideas embodied in drag, it makes someone like me cringe. And by someone like me, I don’t mean a drag queen or a non-binary person. I’m not a drag queen in the real sense — I don’t perform, and I don’t have a persona, and being on the male spectrum of things may or may not disqualify me — I haven’t exactly gone out of my way to find out.

It makes me cringe as a non-binary person who wears, loves, and finds ways to feel visible through makeup. It’s not about running through YouTube tutorials at the speed of light. It’s about being scrappy, using far too much glitter and loose pigment, and making a fucking mess before you find a face for the day that’s going to make you feel beautiful, terrifying, and larger-than-life at the same time. Makeup is power, and I don’t doubt that. But the multi-billion dollar industry is just that: An industry. In the same way that the Criterion Collection enjoys taking the lowest and highest cinema and re-releasing it in sleek new packaging, so, too, does the makeup industry take seeds of ideas that were once radical (red eyeliner, anyone?) and make them tame. Or at least, consumable on a grand scale. 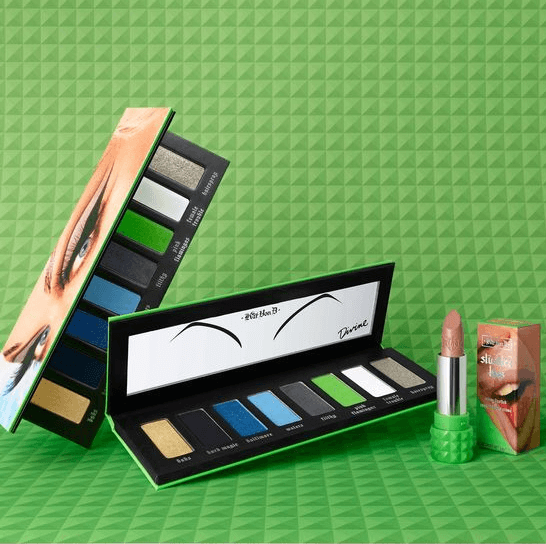 I came to makeup as I came to Divine: late in life. After a lifetime spent resenting the prevalence of lipstick, eyeshadow, and nail polish ads – which at the time seemed like the purest machinations of the male capitalist imagination – I found myself, on the verge of 30, interested in the world of makeup. As a trans guy who is also genderqueer, the discovery of makeup has been a revelation. It allowed me to experiment, alternate, and most importantly play with different looks, each time asking myself, “Is this me? Could this be me?” The idea of switching out different faces for my own was appealing as I started to physically come into my own.

Through a series of experimentations, my own resistance to conformity, and a general celebration of anti-establishment, my relationship with makeup, especially the bright, electrifying colors of the more daring brands like Urban Decay and Kat von D, sent me down a certain path. I began to explore the meaning of makeup, its purpose, and,  particularly in queer culture, its importance. Through a series of documentaries, books, and conversations I learned that this idea, of free, beautiful exchange between faces and forms was one of the basic tenets of drag culture.

With the emergence of Drag Race and its fun, campy queens beloved by straights and queers alike, I quickly became indifferent to common drag. It already seemed like it didn’t (couldn’t) belong to me. While that kind of drag is beautiful and fun, I wanted something more extreme. My quest quickly brought me to Divine, the legendary drag performer and actor, admittedly and embarrassingly late in my career as a queer person. Of course, I knew about her seemingly since I was born. I knew the legend, the image of the giant woman in a mermaid dress, an absurdly drawn back hairline (done to make way for more makeup) further than the natural borders of the face would allow. I knew she was a byword for queer outrageousness. “Filth,” if you will.

But for some reason I hadn’t taken the time to sit down and actually look at her, interact with her, and develop a kind of love for her, until I started to notice that she had become more than a byword and an image in pop culture. She had become a product. I don’t think that I was waiting for her to become palatable to become interested in her. I think I had assumed too much about her. That I knew what the image meant without having to engage with the artist behind it, its part-author. It’s a bit like seeing Warhol’s Marilyn and deciding you know enough about her without watching her body of work. Easy, lazy: But that’s me all over.

When images of Divine as tied to products started to show up with some regularity in my feed I thought, “It’s great to see the legacy of an iconic performer celebrated.” On the other, it’s questionable to see heroes of subversiveness turned into sellable cutouts. In Kat von D’s promotional images for her palette, cis women do their makeup as Divine, with sky-high arched eyebrows and overdrawn lips. Do they know what it means to reference Divine the character or even Glenn Milstead, the actor who portrayed her, and to honor what she means? What she has done for aesthetics, film, and the freedom of expression?

Makeup has always had a much more controversial, parallel track. In the ’60s, rock musicians used makeup to connote a kind of resistance, queer or not. Drag, in the ’70s and ’80s, took makeup one step further, using loose pigments, glitter, and blending techniques to create the ultimate form of self-expression. For many drag queens, this was a way to live inside of a hyper-feminine capitalist ideal — a la Marilyn Monroe or Jane Russell — while putting an individualistic spin on it. For Divine, it was about fear. Turning femininity into a source of fear by embodying that R. Crumb sexy-scary ideal in the flesh. And that, some might say, is her biggest contribution.

Divine was beautiful, but she wasn’t about beauty. She didn’t stand for beauty in the way old Hollywood stars from which Divine and Waters derived inspiration — the Liz Taylors and Jayne Mansfields of the world — had to. She wasn’t selling anything, especially not beauty. When I watch Divine in films like Pink Flamingos, Female Trouble, and Polyester, I see a combination of loud, brash, seething anger, the kind of in-your-face assault that the right kind of makeup can pull off, and a total vulnerability. There’s nothing queerer than that, and there’s nothing really marketable in that, either. But Divine, a byword for campy fierceness for years, is on the fast track to becoming a commodity.

Since Divine’s death, there have been many tributes to her legacy, the most well-known being the creation of the villain of the Disney film The Little Mermaid, Ursula the sea-witch, who can only be described as a throaty fat femme with high arching eyebrows and a taste for drama. Hers is a loud, brash, outrageous performance of femininity so over the top as to be almost menacing. 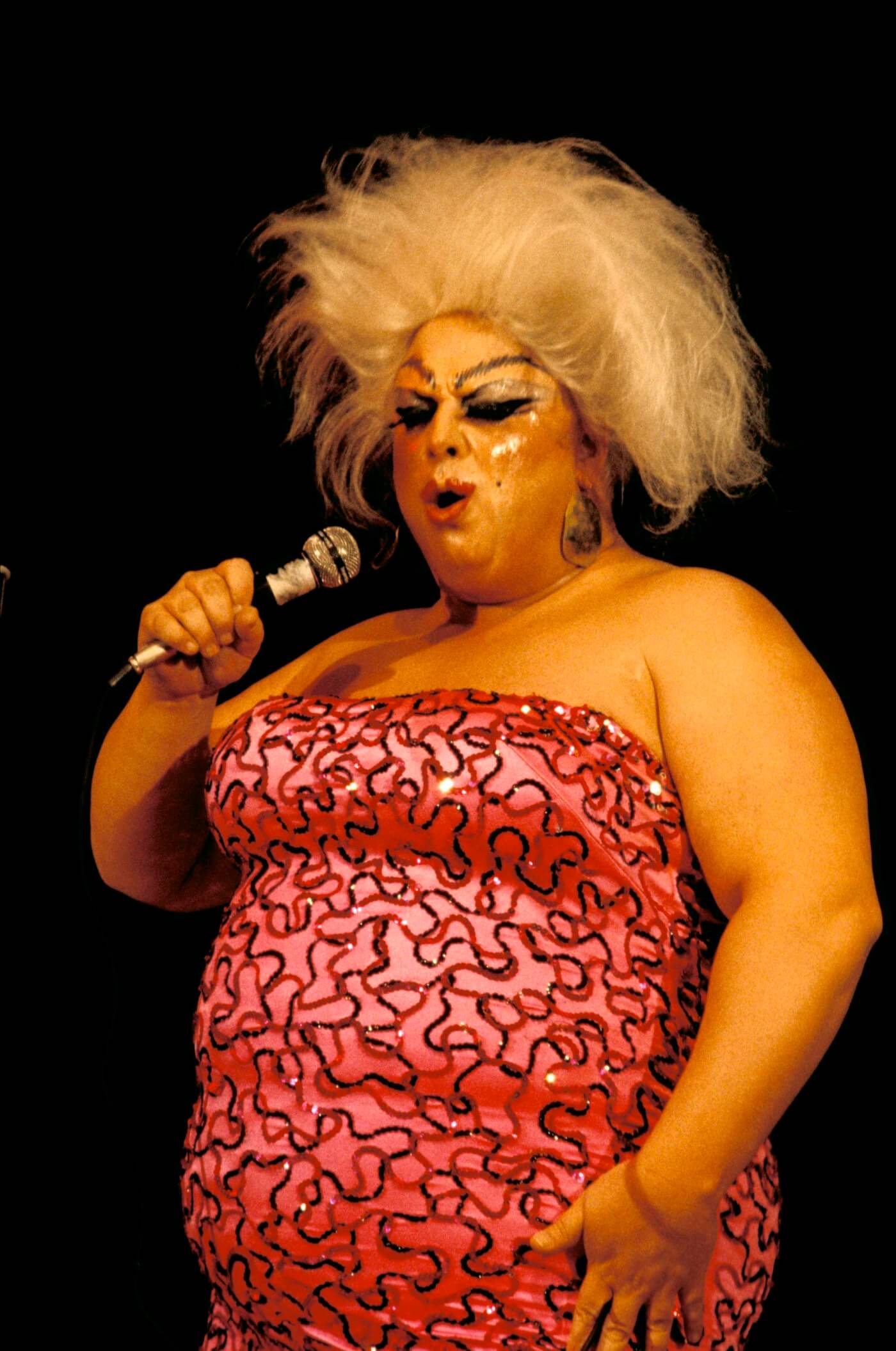 But Divine’s connection to Ursula didn’t stop at her physical image. What’s different and endlessly interesting is the fact that her appearance is a choice. When the witch reveals her ability to transform into a “conventionally” beautiful woman in the third act, viewers are exposed to the true source of her power and fascination. She’s choosing to look the way she wants, and it has nothing to do with what anyone else fucking thinks. According to those who knew Divine and saw her perform live, this is one of the most important aspects of the performance: Divine dressed in a way that, according to John Waters, no fat woman would ever actually dress. Waters also noted, in a 2014 documentary about Divine, that Milstead’s patent gayness was the kind that couldn’t escape notice growing up in Baltimore. “He could piss off my father,” said Waters, “just by holding his books the ‘wrong way.’”

Previous “collaborations” with estates rather than people have earned a bit more backlash (such as the Urban Decay x Basquiat which used a loose interpretation of the artist’s style to peddle lime green eyeliner), though nowhere near the amount one would have expected.

There’s always a moment with celebrities, usually after death, when the essence, or what they came to stand for, overtakes the reality of them as a human being. But when someone is all essence, how can anyone say there’s a problem?

The problem occurs when a powerful idea is turned into a tame one. When an image once used to provoke thought and reaction becomes totally meaningless, stripped of its power.