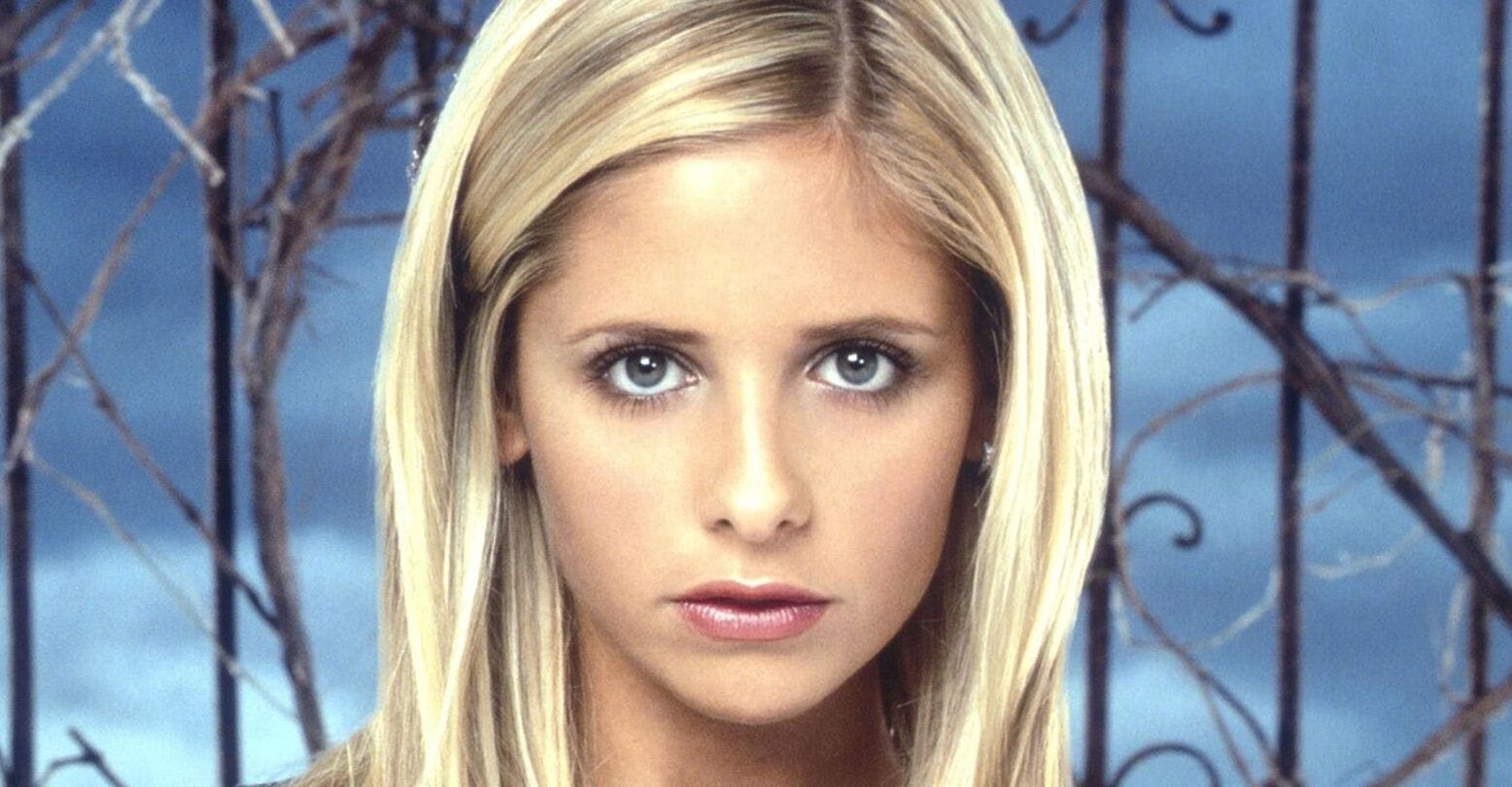 I was never bisexual. When asked what women I was attracted to by my pushy father and brother, I’d exclaim, “Sarah Michelle Gellar.” SMG, who plays Buffy, did not titillate my genitals or stir my romantic heart. It was probably obvious to everyone that I simply loved her, platonically, with all my being.

I was never bigender. It was just the closest I could get to womanhood without all of the terrifying change and uncertainty. I looked, again, to Buffy and other complex female characters some I’d grown up loving and some that I’d discovered recently. As much as the conditioned voices inside me tried to silence the truth-speaking voice beneath the chaos, there came a point when they could no longer stop it. One day it hit me, hard. I don’t just like these characters I want to be them.

Midori Kobayashi from Norwegian Wood is one of those strong female characters. She is a badass because she says all the things that femmes and female-identifying people are told not to say. She straightforwardly asks for intimacy, for attention, and for companionship. Whereas a character like Midori may have been written as “deranged” by another author, Haruki Murakami writes her with respect.

“Somewhere between ‘not enough’ and ‘not at all.’ I was always hungry for love. Just once, I wanted to know what it was like to get my fill of itto be fed so much love I couldn’t take any more. Just once. But they never gave that to me. Never, not once. If I tried to cuddle up and beg for something, they’d just shove me away and yell at me. ‘No! That costs too much!’ It’s all I ever heard. So I made up my mind I was going to find someone who would love me unconditionally three hundred and sixty-five days a year. I was still in elementary school at the timefifth or sixth gradebut I made up my mind once and for all.”

I’ve always had a similar hunger for attention. But between my sister, who got all A’s all the time, and my twin brother who played sports and did things boys were told to do, I wasn’t exactly the most “interesting” child of the bunch. Mostly, I liked things that brought me out of the world, like video games and playing with toys. I didn’t have any Barbies, but I did have Sailor Moon dolls and plenty of female action figures. I think I oozed a loneliness back then, the dissonance between my body and my mind beginning to develop in those moments when I’d rush to pick the female character in video games and see the looks of confusion and feel the judgment around me.

If Midori taught me one thing, it’s that people will judge you for most anything. We shouldn’t feel ashamed of asking for love, but that’s exactly what the world teaches us. It’s love at first sight or nothing at all. The truth is, it’s all bullshit, and I’m calling this shitty spade a shitty spade. When I came out on Facebook, I didn’t attempt to subtly lead people to love me as I truly am. The way I wrote it, I might as well have just said, “Love me. This is not easy. I’m scared and I don’t want to be alone. I need you all.”

It’s unfortunate that I didn’t find Midori and Norwegian Wood until after college. And even then I only read it because I wanted the approval of a boy I liked. Even in reading in what my mind is an emotionally radical book, I was still a limited, self-restrained person. It’s funny, in a way. Thankfully, long before Midori I had Princess Peach and Buffy Summers, more popularly known as Buffy the Vampire Slayer.

Princess Peach or Princess Toadstool, of the Super Mario series, has always been an icon to me. Despite the fact that she often played the role of the damsel, whenever she was available as a player she always seemed to offer something better. While Mario was average at everything, Luigi could jump higher, and Toad was fast, Peach could float making her supremely better than the others.

I remember being empowered by her, much to everyone’s amusement. There weren’t a lot of opportunities for me to shine as a kid. I didn’t like doing what everyone else was doing but when I did join the fray with everyone else, I knew I shined. People were often surprised, not because they perceived that I was terrible at things but moreso for the fact that I didn’t usually compete. Little did they know I was the metaphoric Peach, the superstar of every Mario Party who would tease, “Did I win?” after she clearly won.

I didn’t know any other boys who liked Peach. In fact, most boys I knew disliked her. I realized that most boys were conditioned not to like my femininity, and later, my transness. But, like Peach, that wouldn’t stop me from being amazing. This would become a centerpiece lesson in my life, something that I needed to understand and accept before I could even consider transitioning.

When Peach made her debut in Nintendo’s top fighting game, the Super Smash Bros. series, she continued to dominate as a character that even the most misogynistic people could not deny was a powerhouse. I remember feeling this indescribable feeling beating these traditional male characters with a pink, femme character a feeling I’d experience again, in a much more potent form when I was introduced to Buffy right before my teenage years.

Admittedly, I struggle even beginning to explain Buffy Summers’ impact on me. I adored the show with every fiber of my being but Buffy, the character, was god-like, something that gave me hope and strength when I needed it the most. Given my identities, my likes and dislikes, and the community of people I was born into, I was inevitably going to feel alone. There are countless works of fiction that show characters who are lonely who find companionship and purpose, but few that show people who feel alone in the world and choose to live on without peaceful resolution.

I felt like in Buffy’s world I could be myself, like me being trans wouldn’t have been an issue there because there was always so much going on. Likewise there’s a lot going on in the real world, but here, unfortunately, people can’t seem to mind their business. Nevertheless, Buffy gave me that last little push as an adult.

You see, as a kid I always dreamed of being the Slayer, like her. But as an adult, I realized that little dream would never happen. Slayers can only be female-identifying people. As femme as I was, I didn’t fit the bill. This was a space I couldn’t occupy, no matter how much I felt like I was part of it. Being the Slayer became synonymous with womanhood and as long as I clung to my manhood I would not be able to claim it nor my destiny.

When teased about wanting to date among all of her Slayer troubles, Buffy says, “Alright… yes, [I want to] date, and shop and hang out and go to school and save the world from unspeakable demons. You know, I wanna do girly stuff.” I’d always thought similarly, that girly stuff meant saving the world. I’d always thought women were heroes for the sheer fact that they didn’t act like men.

Arguably some of my disdain for men came from the fact that I was unhappy being assigned male at birth. However, when looking at my heroes and new trans icons like Laverne Cox who inspires me every day I realized my womanhood was something I could never escape. No matter what I looked like or how I tried to hide, it was undeniable and obvious to possibly everyone on the planet. Once again, I was in a glass closet trying to be something that everyone knew I wasn’t. I was never a boy, I was just a girl in a boy’s body.

This energy came to me on a day that wasn’t special in any particular way. I remember asking myself, “Am I happy?” I shrugged internally, thinking that there were lots of wonderful things in my life. However, I heard a soft, almost inaudible voice and it told me something was missing. And then, it hit me. It wasn’t as simple as living as a man makes me unhappy and that only womanhood can make me happy. No, that’s Hollywood’s stock interpretation of transness. Rather, for me, it became ‘sure, I could be happy living as a man but I’d never be complete, I’d never reach peak joy.’

Instead of spending time, idly, in thought and philosophy, I decided to act. I wrote “Come out as trans” on my to-do listand the next day it happened, just like that.

Without Midori and these other characters, I might still be completely lost. And, in case you’re wondering, that boy I read the book for didn’t like me back. Still an extraordinary book, though.

“But it’s the only way I know how to think. Seriously. I’m just telling you what I believe. It’s never crossed my mind that my way of thinking is different from other people’s. I’m not trying to be different. But when I speak out honestly, everybody thinks I’m kidding or playacting. When that happens, I feel like everything is such a pain!”