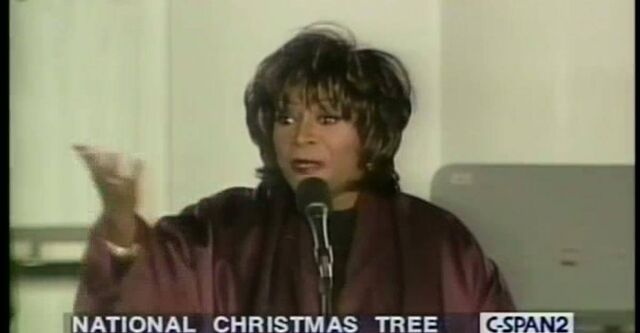 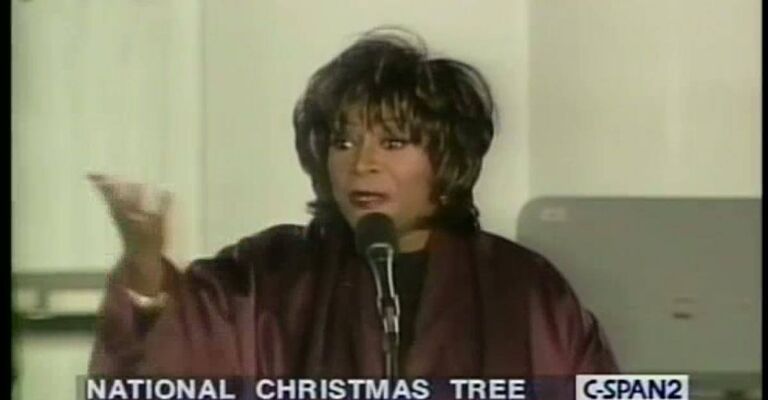 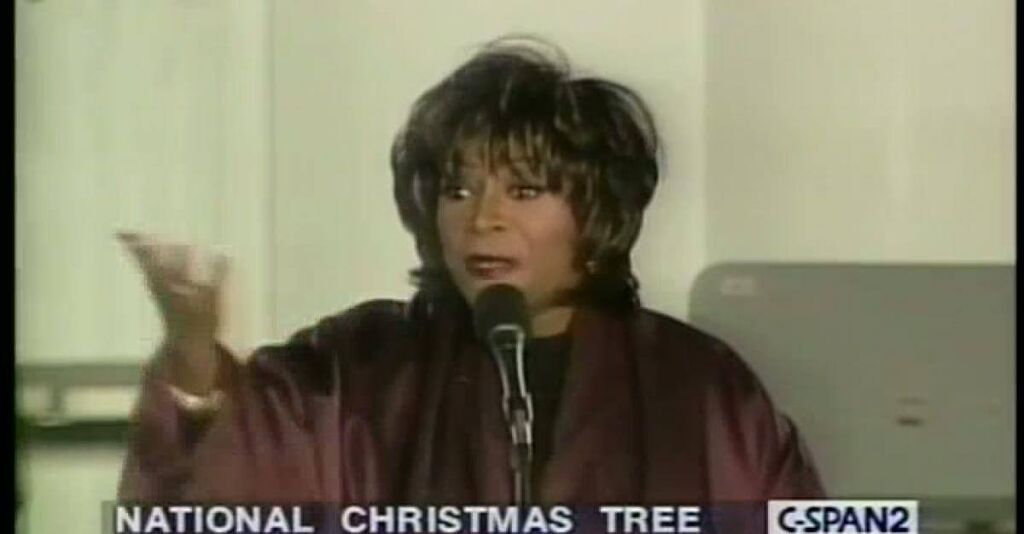 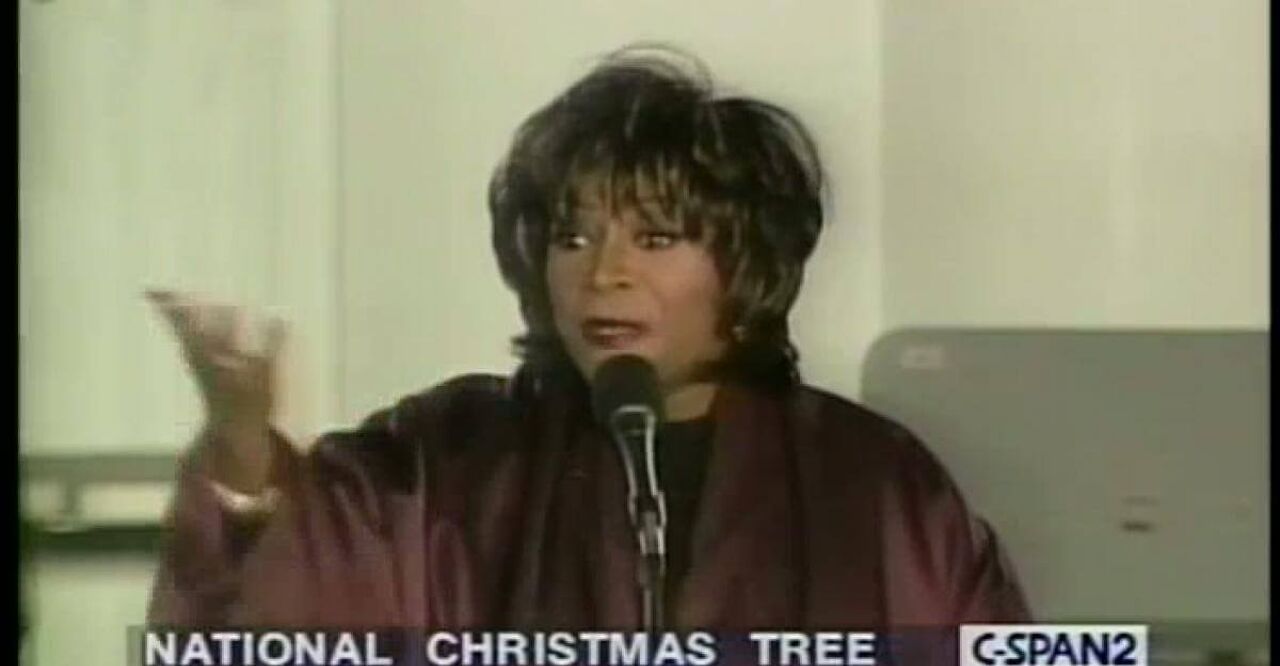 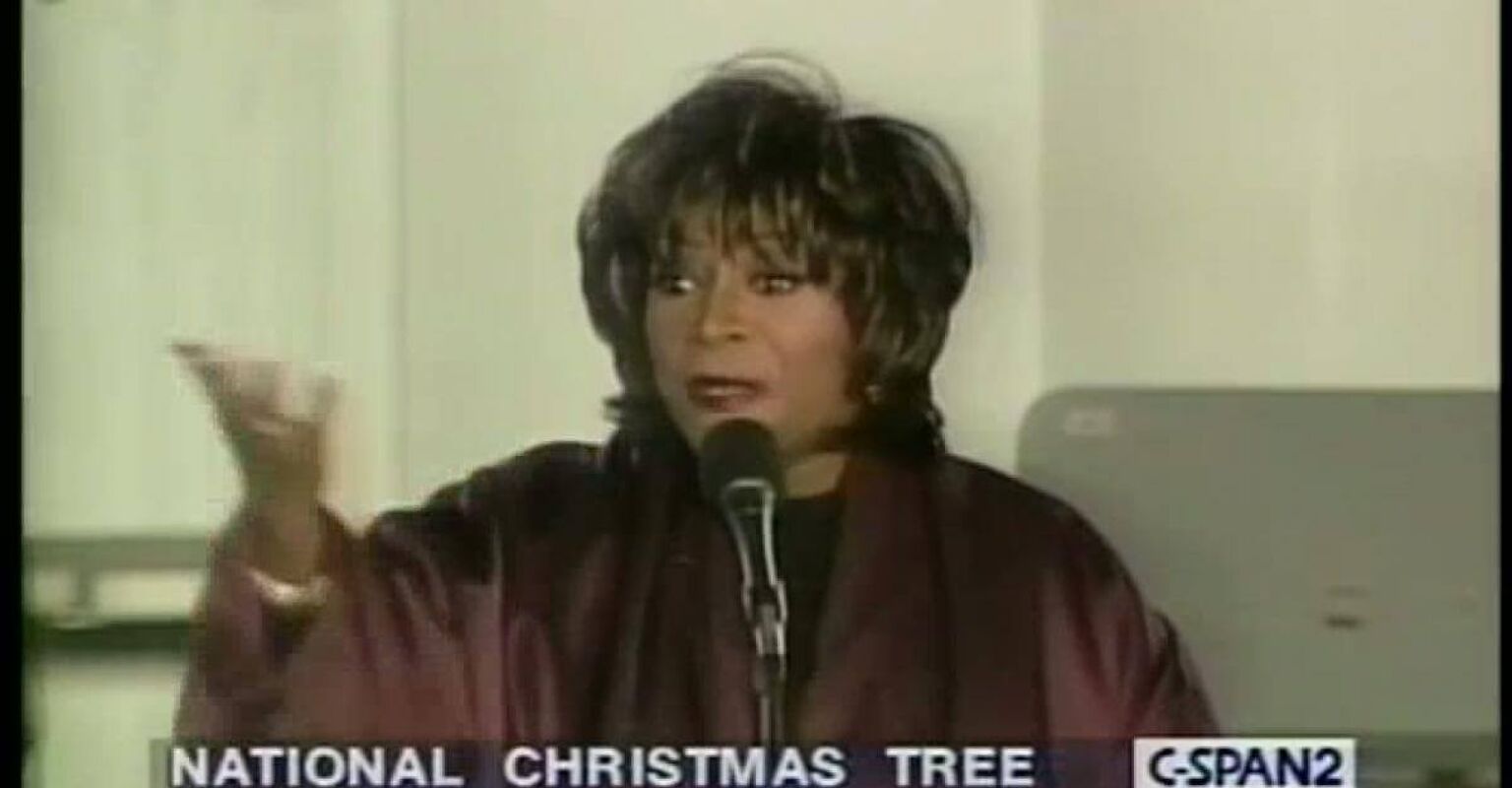 I’ll never forget where I was the first time I heard legendary recording artist Patti LaBelle utter the prophetic words: “Oh my God, this Christmas.”

The words, of course, come from the queen diva’s now-Internet-legendary performance of the song “This Christmas” at the 1996 National Christmas Tree Lighting Ceremony.

During the performance–immortalized against all odds by someone’s well-preserved VHS recording of the C-SPAN2 coverage of the event–the Grammy winner and music icon first appears awkwardly behind the ambassador who is introducing her, before ducking back out of the camera’s view. When she returns, it isn’t long after she launches into her cover of the Donny Hathaway holiday standard that the drama unfolds.

We watch as LaBelle’s eyes first dart to the side to glance at something (or, it turns out, a lack of something) off-camera. Then, three lines into the song, there it is: “Where my background singers?! Woo!” Next: “Oh, baby, baby, I–and that’s the wrong words on the cue cards, I don’t know the song! … This Christmas!”

LaBelle proceeds with the performance, “Ad-lib[bing] all” she can, while the camera gets a close shot of a perplexed young boy wearing a Chicago Bulls beanie. Eventually, the background singers take the stage, the cue card situation is sorted out and the performance is salvaged, all before then-President Bill Clinton and First Lady Hillary Clinton are introduced and we’re all suddenly jolted back into the very different reality of what America was like 20-odd years ago.

The internet of 1996 was, of course, much different than it is today. It’s not hard to imagine this moment being almost instantly chewed up and spat out into countless, top-trending memes across both Gay Twitter and Black Twitter, but two decades of time passing since the incident has not dulled its reach. The clip resurfaces every holiday season and has racked up millions of views across dozens of uploads on YouTube, Facebook, and Twitter.

But how exactly this happened–from the original production mishap itself to its recent resurfacing–remains something of a festive mystery. And it’s one this obsessed queer was determined to solve.

Ever since I first saw the clip, the question of what exactly happened that fateful December day in D.C. has never strayed far from my mind. So let’s start there.

The performance appears to have first begun its social media spread thanks to blasianFMA2’s upload of the clip to YouTube and other platforms in October 2016. Actor Ryan Bloomquist followed with a longer version of the clip just two days later.

Google trend data indicates that the clip’s popularity grew even more in December 2017 as the original uploads and various copies of them were re-shared by the moment’s devoted fans, and Andy Cohen asked the diva about the moment during an interview of Watch What Happens Live! on Bravo.

During that interview, LaBelle downplayed the incident, claiming that she didn’t remember it and “never saw that.”

Of course, it’s not surprising that someone with as lengthy of a career in music as LaBelle might not recall the incident, and most reasonable people wouldn’t think of the moment again. I am not one of those reasonable people.

My incessant internet sleuthing has revealed more clues: A Washington Post article covering LaBelle’s rehearsal for the performance noted that the singer “couldn’t see” the cue cards because of the cold weather. So perhaps the trouble began even before the background singers had a late entrance?

Footage from an interview with Jay Leno that appears to have taken place shortly after The Incident provides even more context. In response to Leno’s question about singing for the Clintons, LaBelle explains the “disaster” that was:

“I went out there to sing my song. I don’t know the lyrics to any of my songs so they always have to have cue cards. They dropped all the cue cards and put them back in the order that she wanted to put them in, so I was singing the wrong song and it was live. …. The audience, they were so nice, they started flagging candles for me, making me feel like they were still with me. It was just awful, it was one of those nights.”

LaBelle goes on to share that Bill Clinton told her “Patti, you’re so funny,” to which she said, “I didn’t come here to be a comedian, I came here to sing.”

And with that, my trail ran dry. Ultimately, it doesn’t really matter how this piece of social media magic happened–though I’m not opposed to seeing more investigative journalism on the subject. What is not a mystery is why the clip has resonated as much as it has.

Simply put, LaBelle is a living American institution. Depending on your family’s vibe, she is either the aunt you love or the aunt you wish you had, as indicated by the seemingly endless collection of LaBelle memes that regularly crop up on social media, from her singing the alphabet on Sesame Street to her wigs and, of course, her sweet potato pie. She is beloved, respected and appreciated across generations and backgrounds in a way that is very rare today.

As for the clip itself, LaBelle’s performance encapsulates everything that is overwhelming about the holiday season, especially to the marginalized communities that already idolize the music icon. The shopping, cooking, card-writing, family interactions and other social and professional commitments of the holidays make the icon’s eye-rolling “Oh my God” sentiment feel truly universal. The holidays are the time of year when it feels like everything that can go wrong will go wrong and that’s exactly what happened here.

More importantly, the clip speaks directly to life itself in the year 2018. The violence and dread, indictments and lies we are constantly bombarded with in this powder-keg of a news cycle can sometimes feel like someone has pushed us out on stage to mixed-up cue cards. And yet, we push on because there’s no other choice. It’s just what we do as queers, as femmes, as gender-nonconforming folk, as people pushed to the fringes at every turn.

Patti LaBelle, our ghost of Christmas past, present, and future. If only we all could carry such grace, caroling through the night in the face of a shit-storm. Now that is the spirit of the season.