Love is blind in the new teen romantic drama, Every Day. The film follows a teenage girl named Rhiannon (Angourie Rice), as she falls in love with a soul named A. Each day, A inhabits a new body, indiscriminate of race, gender identity, disability, and religion. As their romance blossoms, her love sees past those limits as well.

The film is based on the young adult novel of the same name by David Levithan. The gay writer is known for other queer titles, such as Boy Meets Boy and Naomi and Ely’s No Kiss List. His 2006 book, Nick & Norah’s Infinite Playlist was also adapted into a popular teen romance, starring Kat Dennings and Michael Cera. 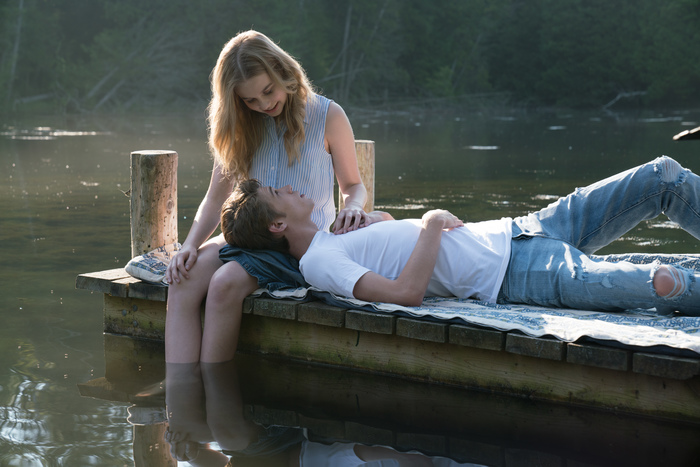 For the film adaptation of Every Day, Levithan’s story comes to life with the help of director, Michael Sucsy. Sucsy is known for directing Channing Tatum and Rachel McAdams in The Vow, as well as the critically-acclaimed scripted HBO adaptation of Grey Gardens, starring Jessica Lange and Drew Barrymore.

With the release of Every Day and Levithan’s upcoming book sequel, Some Day, we caught up with them to discuss the story’s queer legacy.

You’ve written a few queer young adult novels. How would you explain the importance of the genre to queer kids?

David Levithan: I think what queer YA can do, and not just in my book but all queer YA writers, can show queer kids sort of a road map for navigating adolescence, whether it’s very realistically or, as in the case with Every Day, more thematically. But also, some of the most compelling reactions I get are from non-queer readers too, and just to show them the humanity, I think that’s apparent to everybody. So, that is sort of a common mission that I think all of us have. 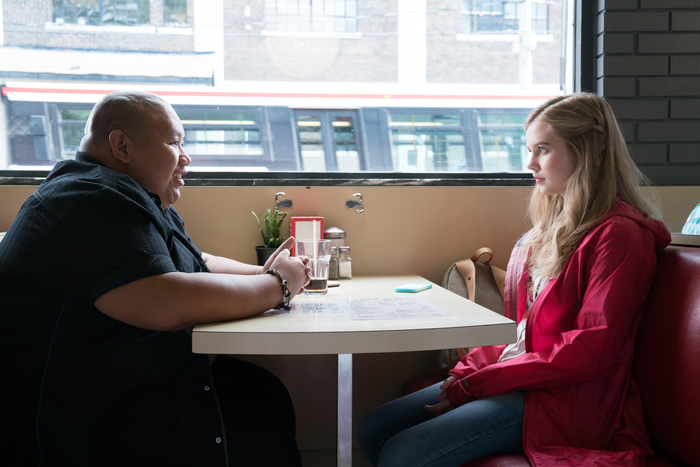 What compelled you to create this genderless character, and what was the initial response to that?

DL: I was fascinated with the premise of what it would be like to wake up in a different body every day, and I didn’t really think of all the implications when I started writing the book. And then, clearly the implications rolled on in as I was writing, discovering that A would be a-gender and a-racial, and would have no DNA or parents. And that was really interesting for me to explore. What was interesting to me was that a lot of the reaction, especially when I did school visits, was about the question of gender. There’s a great line in the movie when Rhiannon asks A, “Do you consider yourself a boy or a girl?” And A answers, “yes.” I think it was about exploring that. And in 2012, the notion of being a-gender or gender queer wasn’t quite in the consciousness, especially in high school, as it is now. So, it started a lot of really interesting conversations with kids about the notion of not being defined by the body that you’re born into, but you’re defined by who you are. 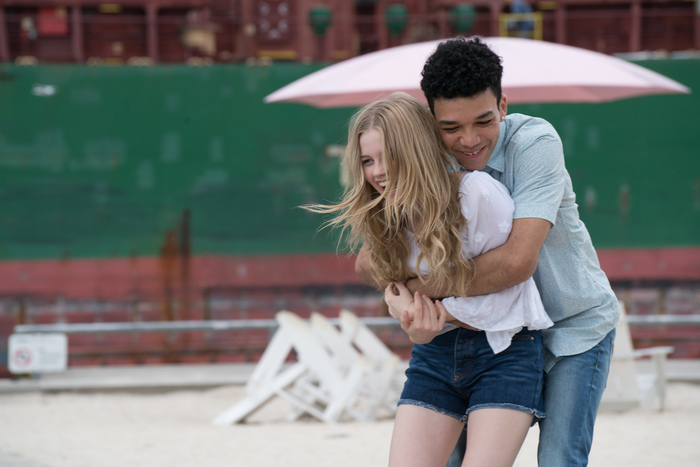 As a gay director, how did it feel to be able to incorporate some queer elements into such a big budget movie?

Michael Sucsy: Well, it’s interesting because the first interview I did for this film, they asked if I consider this a gay film, and I said no. Because I don’t really think of things in those terms. I mean, obviously I’m extremely aware that there’s gender fluidity and sexually fluid elements in this, but it’s a theme of the story to me. And I don’t mean to diminish the appeal to a gay audience. It’s really important to have gay stories on the screen, but it’s not something like Call Me by Your Name, which is so much more clearly a gay relationship at the core of the story. This transcends gay, and it transcends straight. It’s just about the concept of love and souls falling in love and that gay and straight are both encompassed in that.

But in terms of the gender fluid and sexually fluid elements, was there any kind of pushback with putting those into the movie?

MS: No, I mean it was part of David’s book, and the studio was committed to bringing David’s story to the screen. It was really an organic part of the story, exploring that. So, thankfully no. 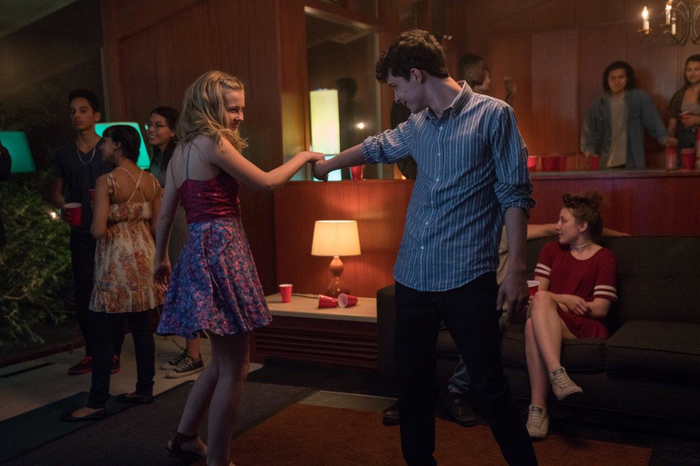 There’s a very powerful scene with a trans kid named Vic (Ian Alexander) in the movie. Do you think it’s more important to have those kinds of characters for queer kids to identify with or to educate straight kids?

MS: To be quite honest, I can’t remember exactly what the line was in the script on the day we were shooting it. But Ian came to me and said, “No trans person would say this,” whatever the line was at the time. And I was kind of making an argument with Ian that I understood that but this wasn’t just a trans actor speaking to the trans community. We’re trying to help people who maybe aren’t comfortable with the concept of trans to understand it. So, that was my kind of counter argument, and then Ian came back and said, “Yea, but I just don’t feel comfortable.” And I asked, “What would you say?” And that’s part of the line that Ian ends up saying. But this is part of the process of working with actors. And I was committed to finding a trans actor for the role. I looked at both trans males and trans females for the role. I wasn’t sure which way it would go. But I always appreciate that sort of give and take with any actor when they’re uncomfortable with a line for their character. And Ian, being transgender, obviously had an insight to this character that I didn’t have. And it was a really great moment when Ian helped me tell the story better.

DL: And what I love about that scene is that it applies to so many characters in the movie. I think a lot of the times when you have a trans character included amongst the gallery of other characters, they sort of hold the mantle of “I will not be defined by my body.” But what I love about the movie and the sense of inclusion in it is that it’s something that so many of the characters are dealing with, that what Vic is going through is just one manifestation of thematically what a lot of people go through. And hopefully that does create some commonality, rather than difference in these characters. 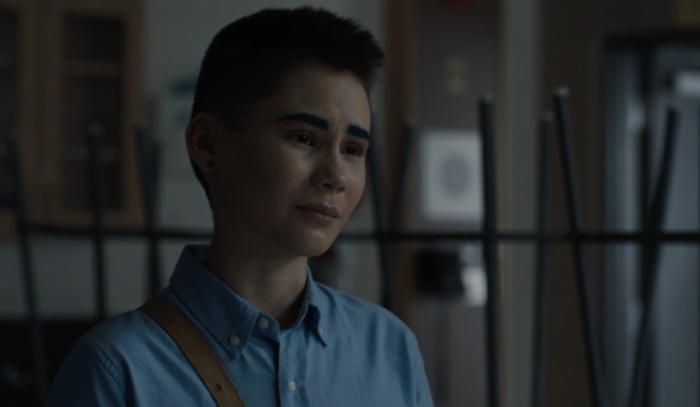 What was it like getting all of these young actors to embody the same character?

MS: Challenging. (LAUGHS) It first started for me in the casting process. I wasn’t doing it consciously, but I realized in the middle of the process that I was picking people who I would consider old souls. Sometimes, I’d be down to two or three people for the same role, and I realized someone didn’t have an old soul, and that’s why I wasn’t pulling the trigger. So, I think that’s the commonality between all the actors and actresses. And then, just on a technical level, I never had all the actors together at the same time because of the way the production was scheduled. So, I wrote letters to everyone in advance of filming, and I asked them to read the entire script, not just for the narrative, but for the A character as if you were playing A in every scene. Even if you’re on five pages, read all of it so that you understand everything that happens before your character comes into the story and where A is going in the story. And the actors said that really helped out.As gay kids, did you ever have a movie or book that resonated with you the way this is resonating with queer kids?

DL: That’s a very good question. For me, movie wise, my honest answer, even though he’s allegedly not queer, it all goes back to Duckie in Pretty in Pink for me. That was a character that I related to and thought of. I know he’s allegedly not queer, but in my head, he was. Until Ricky in My So-Called Life came along and showed me a real gay character who had real gay thoughts and was really sweet and really human, I sort of held on to Duckie.

MS: It’s such a great question, and I don’t have an immediate answer to that. I have to kind of dig back in. I mean, I definitely grew up in a time when this wasn’t something shown onscreen. And there weren’t role models. I mean, I would have a crush on Jake from Sixteen Candles. But that’s not the same thing as gay role models.

Every Day is now in theaters. Watch the trailer below: