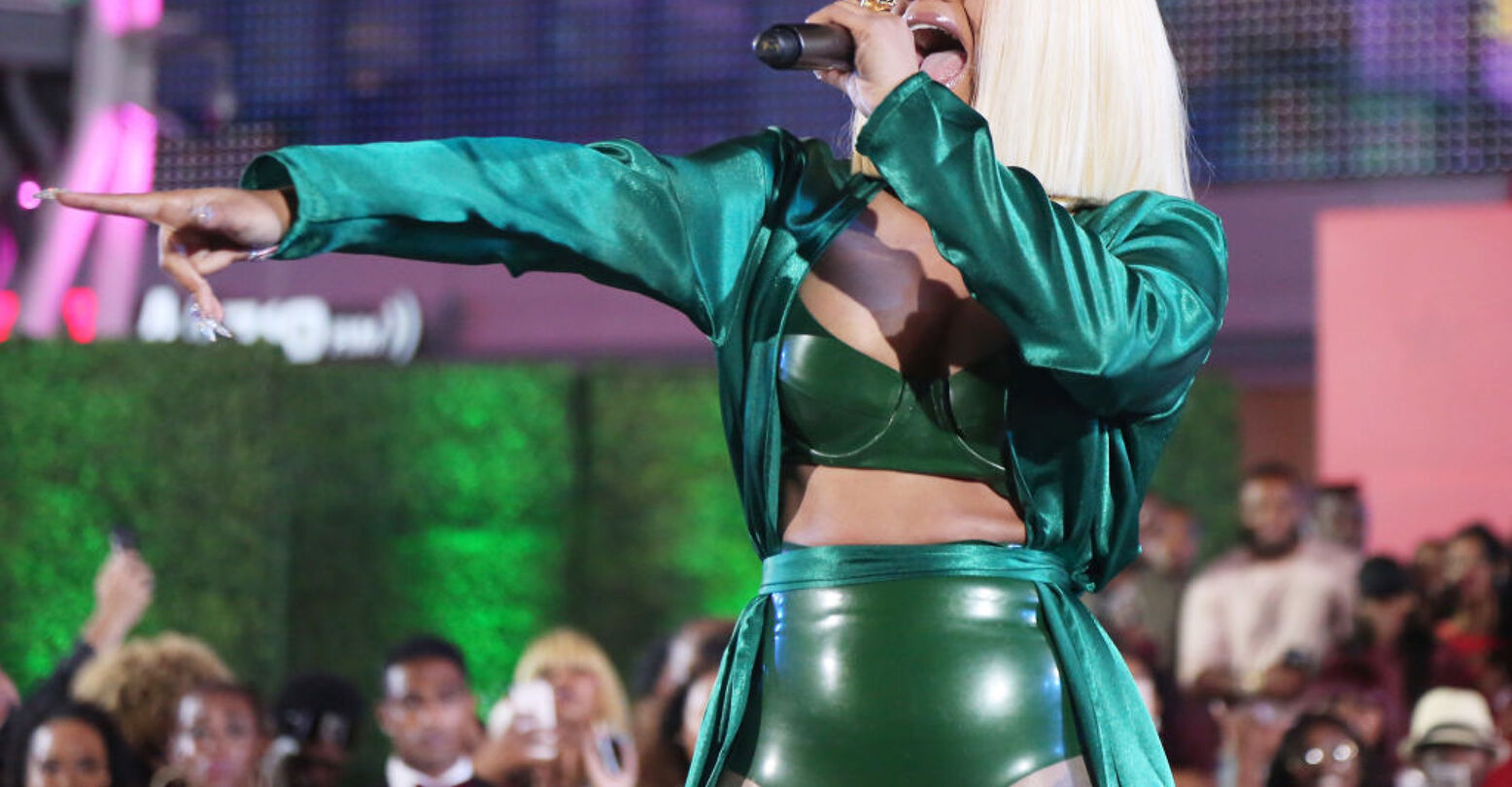 Let’s be real here, just when we thought that 2016 was the worst year on record, 2017 came along and kicked last year’s ass to the curb. That doesn’t mean, however, that we should focus all our energies on the bad stuff yes, it’s been hard, but life can be all doom and gloom if you let it, and we’re gay so we know how to find sparkles in the darkest of places.

In fact, if you go looking you’ll find that, despite Ed Sheeran’s ubiquity, 2017 has been pretty damn gay when it comes to music. So in celebration, and in no particular order, here are some of the gayest moments in music this year.

2017 saw Celine Dion cement her status as a modern-day icon, and from her performance of “My Heart Will Go On” at the Billboard Music Awards to celebrate the ballad’s 20th anniversary to the series of frankly amazing video vignettes for Vogue, she gave us EVERYTHING this year.

But could there be a gayer moment than this: Celine Dion singing along to Cher’s “Believe.” Filmed backstage at the BBMAs, Celine wearing a dress with ridiculous cloud-like shoulders is getting her life to “Believe” like a true super fan. Legends supporting legends.

We would like to share our love and happiness. We have been blessed two times over. We are incredibly grateful that our family will be growing by two, and we thank you for your well wishes. – The Carters

Most people, when they tell their friends and family that they’re pregnant, do it over dinner or perhaps via a phone call. Of course, Beyoncé is not most people. To let the world know that she and her husband were having twins, Bey did something only she could pull off a whole pregnancy photoshoot. No one else is this extra and no one else can be either.

Demi Lovato might have teased some same-sex attraction when she was cool for the summer, but Halsey and Lauren Jauregui from Fifth Harmony created a same-sex love song that, for the first time in recent memory, put bisexuality front and center. Not to mention that their duet together, “Strangers,” f*cking bangs! Dear 2018, more bisexual bangers please.

Lana Del Rey might have admitted her lust for life this year with one of her best albums, but she also revealed that magic was at play, too. Not only did the teaser for Lust For Life see the singer living in the “H” of the Hollywood sign concocting the album for her fans, but Lana also asked her Twitter followers to gather ingredients and gave them occult ritual dates in a bid to help dispel Donald Trump from the White House.

While this might all be posturing, Lana confirmed to NME that she had indeed placed a hex on the current President. “Yeah, I did it. Why not? Look, I do a lot of shit,” she said. Amazing.

The quality of Katy Perry’s album Witness is highly debatable, but if there’s one song that got gays quivering it was “Bon Appétit.” Half novelty single half legitimate sex bop, the track complete with a feature from problematic hip-hop trio Migos wasn’t quite the “purposeful pop” the Perry had promised with Witness, but head to any gay bar and you’ll see hundreds of homos getting their life. Bon appétit, baby.

In this house we stan Dua Lipa, and like the Ten Covenants delivered to Moses, Dua’s “New Rules” about avoiding that f*ckboi in your life should be written in every gay man and straight girl’s home. So, repeat after me:

Because, if you’re under him you ain’t getting over him.

Charli XCX’s and her “Boys”

God bless you Charli XCX for giving us the “Boys” video, a millennial pink celebration of boys of all shapes and sizes. Thank you, thank you, thank you. Forever now, Joe Jonas eating pancakes and drinking milk will be the ultimate turn on, and I’ll insist that any man I meet takes part in a shirtless photoshoot surrounded by puppies.

Ariana Grande’s Greedy and THAT Mask

“GREEEEEDDDDDAHHHHHYYYYYYYY”
“Valentina, this is a lip-sync for your life. We need to see your lips. Take that thing off of your mouth.”
“I’d like to keep it on please.”

Fenty Beauty and My Wild Thoughts

I’ve never felt more alive than when I saw Rihanna in the “Wild Thoughts” video and realized that I must only wear peasant crop tops and dresses for the whole of summer.

I’ve never felt more alive than when Rihanna released an actually inclusive and representative makeup range and when I saw people’s glo-up on Instagram as they went to town with that highlighter.

So many people have had a difficult 2017, and Selena Gomez is no exception. Despite having to undergo a kidney transplant due to complications from lupus, SelGo has still released some of the year’s biggest bops.

On the top of that list is “Bad Liar,” a song that samples the Talking Heads’ 1977 hit “Psycho Killer” and was co-written by INTO favorites Justin Tranter and Julia Michaels. Not only does the song feature some of the strangest vocal inflections in pop, but the whispered lyrics about lustful obsession equate to some serious #relatablecontent. Add the Sapphic twist at the end of the video, and Selena Gomez’s “Bad Liar” might low-key be the gayest song to come out this year.

Kesha’s story might not be over, but watching her this year overcome some of her adversities has been thrilling and emotional. “Praying” is the song that any person who has been put down, held back, chastised, abused, picked on, bullied, and marginalized will feel empowered by. It’s a triumphant rallying cry that, months later, still gives me shivers and brings a tear to my eye. And that note. THAT NOTE. People use the term inspiration loosely, but Kesha truly inhabits the word.

Given that her iconic Las Vegas residency is coming to a close on December 31st this year, Britney Spears has been figuring out her next move. Not only has she shown her political prowess by delaying an election in Israeli, but the pop music legend invented live vocals by singing “Happy Birthday” in Singapore and gave the press and media “Something To Talk About” back in Las Vegas.

Most incredible, however, are her capabilities as an artist, which has cemented her new status as a world-renowned painter. When will you faves.

The Sheer Villainy of “Look What You Made Me Do”

Providing enough gag worthy references to celebrity feuds and snake emojis, Taylor Swift’s “Look What You Made Me Do” video paints the Nashville singer not as the wronged party, but as a campy villain from an ‘80s TV drama plotting one last ditch at revenge. There’s something gloriously evil about the way she snarls her way through the song’s confrontational lyrics, and who doesn’t love a choreographed dance routine with a troupe of men dancing in heels as Taylor as ominous and bewitching as Cruella Deville leads the fray.

Demi Lovato released the best pop album of the year (don’t @ me Swifties), and on one of the album’s stand out moments she addresses something that many gay men can relate to: daddy issues. “Daddy Issues” not only bangs hard, but it’s like Demi has been rifling through my mind, hand-picking all my complexes, and turning them into a song. With this, alongside her own discussions about her own same-sex desires, Demi Lovato might have low-key become 2017’s gay icon.

Cardi B already knew that, despite it being winter, a hoe never gets it, but with “Bodak Yellow,” arguably the year’s biggest tune, the former exotic dancer turned social media star turned legitimate rap BOSS epitomized the rags-to-riches story that the American Dream is made of. It’s brash and abrasive but in the best way possible. When the world throws you a new icon, you take it, and you treasure it. Not to mention that she’s a staunch supporter of the LGBTQ community. Queen Cardi B.

The ‘Call Me By Your Name’ Soundtrack

What could be gayer than the soundtrack to the gayest film of the year? No, they didn’t re-release Burlesque, it’s the soundtrack to the sublime Call Me By Your Name specifically, Sufjan Stevens’ two new musical offerings, “Mystery of Love” and “Visions of Gideon.” They might not be the campest nor most colorful of additions to this list, but the way that both tracks encapsulate the love affair and wrought emotions depicted in André Aciman’s novel and Luca Guadagnino’s movie is pretty astounding. They’re wistful and melancholic songs that inhabit the nostalgic yearning of first loves and broken hearts.

Frank Ocean throwing a Paris is Burning inspired birthday ball is gay culture. Frank Ocean wearing tight glittery pants while walking the runway transcends gay culture. Seriously Frank, what you playin’ at acting this way? Why you gotta do these things to us?

Not only did GRAMMY NOMINATED ARTIST SZA deliver one of 2017’s most self-assured debuts, but she also served us face, body, and looks in the shape of that black coat and panty get up in the video for “Supermodel.” The song, a bona fide bop, also charts SZA’s breakup from an ex-boyfriend and features the lyric: “That’s why I stayed with ya/ The, the dick was too good/ It made me feel good/ For temporary love/ You was a temporary lover.” Seriously, SZA is one of us.