“Harajuku just needs 11 people to hold the net for her to jump into during her number. Can you do it?”

It’s 11:30 on a Friday night and my friend Mini Horrorwitz has just assigned me this task with the casual air of asking someone to hold a door open. This was how I was enlisted to support Harajuku during the finale of Mr(s) Brooklyn, or Mr(s) BK, a five week pageant showcasing the best performers Brooklyn nightlife has to offer. Past winners have gone on to be featured in Vogue (2013 Winner Macy Rodman) and land Out Magazine covers (2017 Winner West Dakota) or even land spots on RuPaul’s Drag Race (2014 Winner Aja). The pressure was on to create a moment, and I was getting swept up in the race.

Originally called Mr(s) Williamsburg until bars elsewhere in Brooklyn began participating, Mr(s) BK is a cross-performing discipline competition organized by Alotta Mcgriddles. Mcgriddles has organized the pageant four of the five years it’s been in existence, briefly abandoning the pageant in 2016 after some contestants made her think it wasn’t worth the trouble.

“I would give these girls names and a platform and some of them would turn into monsters, throw shade, and not show any respect to me or what I did for them,” Mcgriddles tells INTO. “I brought it back because there are awful people in every walk of life and I shouldn’t let a small group of negative Nancys stop me from doing something great.” 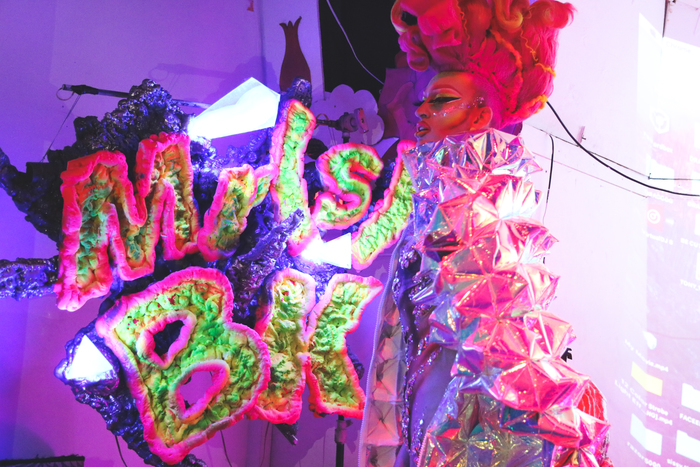 Mcgriddles has built a competition that both confirms the kind of drag showcased on mainstream outlets like Drag Race and completely subverts it. RuPaul’s past comments on trans women and afab queens (assigned female at birth, also known as hyper queens or more problematically, bio queens) have convinced many that non-cis men will never be fully welcomed into the show’s legacy. Mr(s) BK includes multiple performers that wouldn’t qualify for the show’s limited scope, and thusly, shows the unlimited future for drag as an art form.

Each week, a preliminary round occurs at a different Brooklyn-based bar. Contestants participate in interview and performance portions, both of the judges (a rotating group of past contestants led by Dakota and Rodman) score and tally to determine the Mr(s) of that bar. The winning contestant wins 200 dollars and automatically goes on to compete for the final round. The audience also gets to select a “wildcard” for each bar through applause, who also goes on to compete for the crown. This year, the competitions took place at Bizarre Bushwick, Metropolitan, and Secret Project Robot, also home to the finale.

“If you knew anything about this scene you know how inclusive it is and how hard it is to make a name for yourself in any category of nightlife,” Alotta says. “We’re all trying to make money and make a name for ourselves, and you lose sight of that in nightlife. That’s why Mr(s) BK is a different thing than anything else you see.”

While most of the contestants were cis men dressing as women, this year’s lineup included burlesque dancer Qualms Galore, afab queen Vylette Tendency, and drag king Sweaty Eddie. Every single finalist of the 2018 pageant were performers of color. Still, the pageant isn’t a completely problematic free zone: no spaces are. MC and Drag Race Season 8 alumna Acid Betty made host/DJ Merrie Cherry gasp when she used the slur “tranny” onstage, despite trans contestant Reagan Holiday and trans judge Macy Rodman both being in attendance.

Some performers subverted the idea of drag completely. Ruby Foxwrote on Facebook that her number during the Mr(s) Metropolitan leg wasn’t simply drag, but a performance piece, seemingly offering a reason as to why she bared her chest and her choice to wear loose-fit men’s jeans, which she set aflame and did a backflip to put them out.

Rather than bow to public pressure to be more traditional, Fox pushed further into the realm of dance and performance art when, during the pagent’s finale, she briefly used her mouth as a shadow puppet to lip sync behind a curtain before emerging without makeup or costuming to dance in and out of the static spotlight she brought to the stage.

Qualms Galore took the crown of Mr(s) Bizarre Bushwick, moving many in the audience to tears during an emotional striptease about her divorce. Along with the myriad of queens who performed original raps, these performers show that the future of drag may see it mingling more freely with other performance disciplines now that there’s a broader understanding around it. 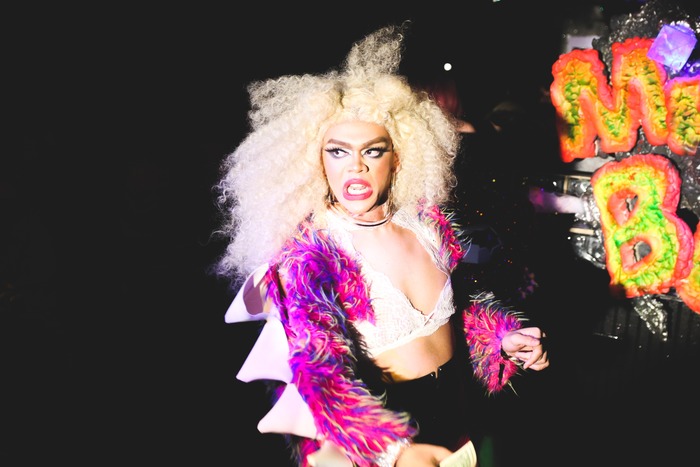 Even as the pageant looked to the boundary-blurring future, classic drag sensibilities were also fully present. During the preliminary round at Secret Project Robot, Mary Con turned the innocent question “What’s the tootsie roll center of the tootsie pop?” into something lewd before segueing into a Lil’ Kim number with reveals, shaking her boobs appropriately. Not the most boundry-pushing drag, but the crowd loved it enough to elect her Mr(s) Wildcard for that round. Virgil III performed “Heart to Break” by everyone’s problematic fave Kim Petras, popping balloons to shower the audience with confetti before revealing a tassel swimsuit number under her white leather coat. Bronx-bred Magenta won this Mr(s) Wildcard title at Metropolitan and me as a permanent fan with her energetic dancing and banjee attitude. Emi Grate became wildcard winner of the Bizarre Bushwick round based on the merits of her emotional lip sync to Celine Dion’s “It’s All Coming Back” at the bar’s piano, losing her wig during a particularly emotional bought of hair flipping. She went on to show she had more up her sleeve, winning the title Mr(s) BK after performing a tender lip sync performance about home, tied to her immigration struggles.

Tropes specific to Brooklyn were on display as well. When asked by Acid Betty what she loved about performing in Brooklyn, Whatevera simply responded with “props.” Indeed, props were the order of the day for almost all performers. Some, like the Tootsie Pops Mary Con, who pulled from her crouch and threw at the crowd, were cleverly tied in with the song. Other’s seemed random, such as queen pulling ribbons from her sunglasses. Mikey Dallas became the second Mr(s) Wildcard of Metropolitan thanks to a number that utilized ipads mounted in her shoulder pads. The outfit simply looked fierce at first, before the screens turned on and Dallas was accompanied by two doppelgängers lip syncing alongside her.

Gore was also a running theme. Two queens ate hearts onstage. The most gruesome was Linda Felcher, who came onstage with a brown mask with moving pincher-like mouth. During her number (a chopped and screwed version of “Supermodel” from the movie Clueless) she made her way into the crowd before ripping the lower half of her mask off, showering everyone in the crowd with fake blood to screams of delight from patrons. In Brooklyn, shock value is more appreciated than a stain-free outfit.

Mr(s) Secret Project Robot Harajuku was most successful in this desire to gag an audience. After setting up a kiddie pool onstage with the help of performer Panthera, she climbed onto a stool while lip syncing Hilary Duff’s song “Come Clean.” The number could have worked based solely on the nostalgic song choice and Harajuku’s chops as a performer, but she didn’t stop there. As she lip synced the song’s chorus (“Let the rain fall down”) over her shoulder, Panthera douched her exposed ass. The crowd went wild as rivulets of water shot from Harajuku’s asshole into the kiddie pool. Later, Harajuku rolled in the pool during her song’s bridge, completely mocking the song’s idea of “coming clean.” Not one to placidly try and please the judges, she squirted one round of the ass juice into the crowd, ruining the judges drinks and causing Mini Horrorwitz to leap out of her seat. It was shocking, perverse, hilarious, and proved impossible to top, despite many attempts.

Pepto Dismal followed the book the closest by douching with waffle batter before cooking and eating one onstage in a send up of pretentious art students that she continued with during her interview portions. Making a mess was the order of the day for Pinwheel, whose cake farts number was so full of splatters that Alotta had to pause the competition so they could wipe down the stage and projector screen.

Moments like these, where the inner workings of the pageant were brought to light, are de rigueur for the Brooklyn drag scene. The whole pageant was a slightly ragtag affair, but with glamour. Acid Betty designed huge incandescent eyes to go onstage along with a psychedelic Mr(s) BK sign. On the first night, Merrie Cherry, dressed in Nike sneakers, a mumu, and a Pharrell hat, had to unscrew one of the opulent eyeballs from its base to fit behind the DJ booth, which seemed fine until she was unable to reattach it. Early on, Acid Betty produced a giant tube with a glittering red mouth on the end for audience to shove tips into. Its length made it perfect for a drag queen to hoist it over the crowd after a number so even the audience members in the back could place their dollar bills inside, but by the finale, it was hopelessly broken. Acid Betty, while at times displaying a biting wit, would often pronounce the names of the contestants wrong if she remembered their names at all.

This slapdash nature was present even as the performers pulled stunts that might have benefited from more structure and organization. In the finale, Mary Con tapped sparklers to her hands to serve as nails, but had to be rushed from the stage at the end when her helpers couldn’t put them out once lit. Harajuku, determined not to let her preliminary performance be the only the thing pageant audience remembered her for, was determined to do her net stunt no matter how long the crowd had to wait for her to set up (it was five mins in drag time, so closer to 30 minutes passed before she began). This raw nature is one of the appeals of the pagent: you get to witness art being messily made in real time. 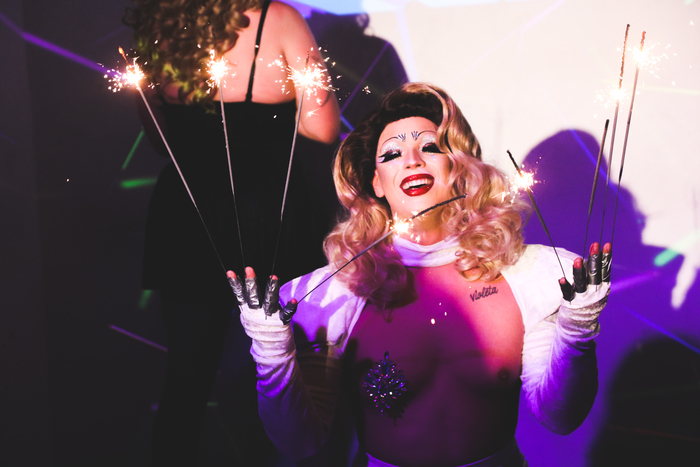 “It’s a moment. It’s an experience,” Alotta said. “It’s not something you can just sit down and watch in any old room all over the country and I think that’s what makes it so much more authentic.”

During Harajuku’s authentically long setup period, I realized with a sense of panic that there were too many people on the steps leading up to the platform for me to assume my place holding the net. After sending a frantic text to a friend who was also supposed to help, I heard back that they had overestimated the help they needed. It was safe for me to watch from the crowd as Harajuku took the stage and lip synced to Rihanna’s “Sledgehammer.” When the net rose up from the lip of the stage, it started to dawn on the crowd why they had waited so long. 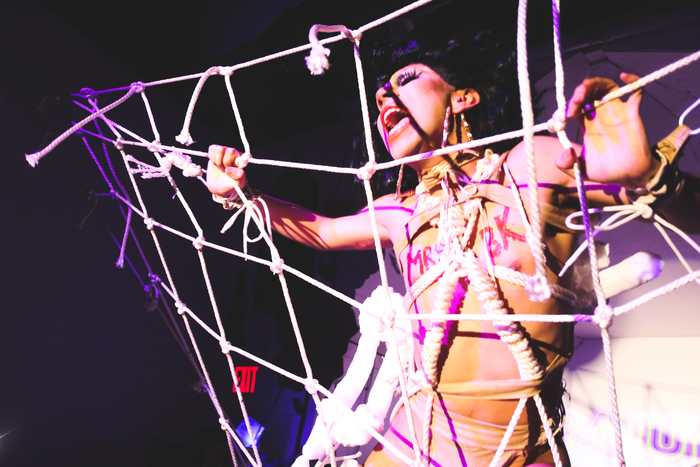 As Harajuku climbed up the net, she was greeted with roars of approval. Eventually she came to rest with half of her body jutting over the edge into free space, making eye contact with the crowd like some sort of avenging angel. Mr(s) BK was scrawled in red lipstick on her chests, and one of her balls was dangling free of the ropes, an affront to the cisnormative idea of womanhood many critique drag for trying to uphold. No one seemed to mind.