I’m always going to be of two minds when I hear the word “sequel.” Sometimes I regard them as woefully and unequivocally unnecessary. Other times, I look at the premise of the sequel and go:

For example, every Transformers sequel was woefully and unequivocally unnecessary. On the other hand, when Reese Witherspoon announced that there was going to be another Legally Blonde sequel, I definitely found myself wanting to know more.

There’s no exact science to this sequel craze, but I will say that a quality story does compel people to want to return to it and its world every single time.

Such is the case with The Incredibles 2. With 14 years of hype to capitalize on (since Brad Bird wasn’t about to do another one until he had a good story), The Incredibles 2 seeks to deliver and build upon the legacy of The Incredibles, its bombastic villain, iconic one-liners, and surprisingly dark twists and turns. It was a hefty task, too, since most of us regard the original as the Fantastic Four film we deserved. 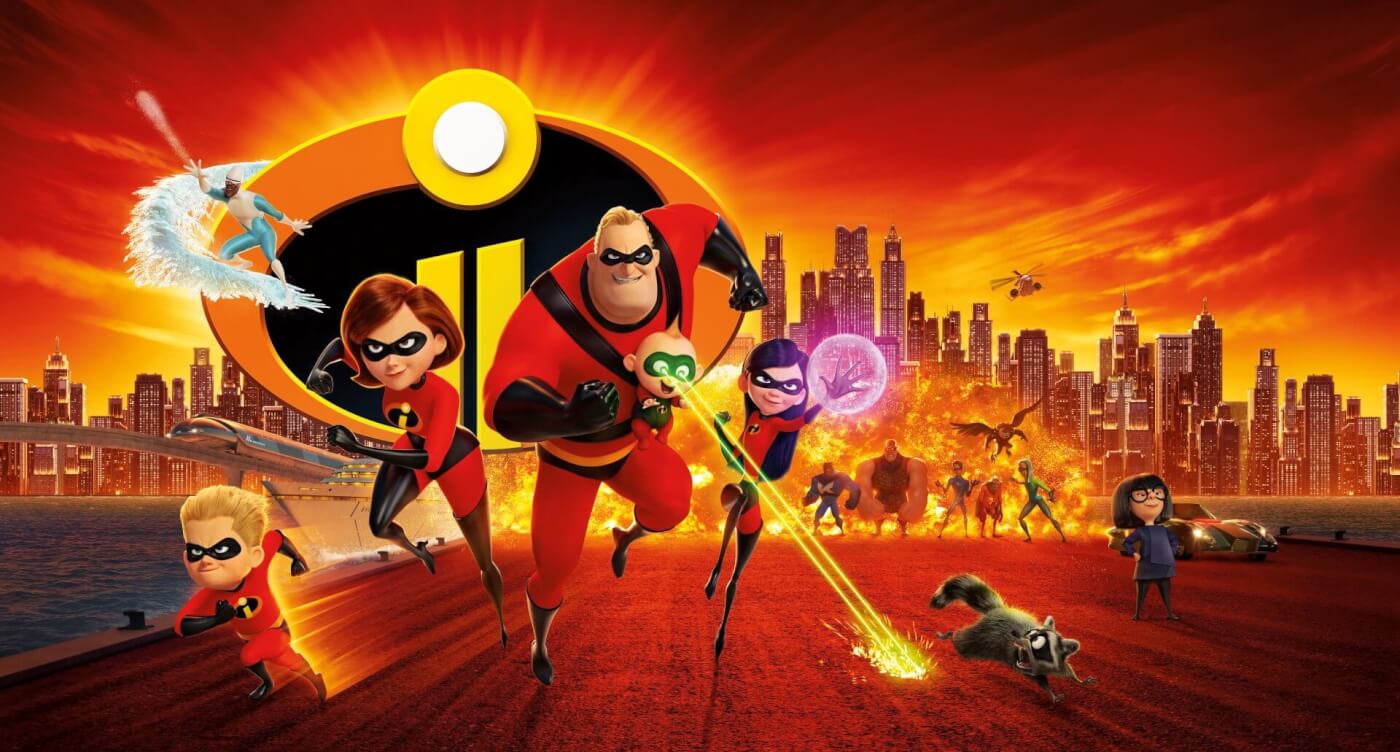 The Incredibles 2 is great, funny, and enjoyable in all the right ways, but the caveat is that the film does this all in familiar ways. If you get a sense of deja vu while watching the titular sequel, you wouldn’t be too off-base.

The Incredibles 2 shares certain beats with the first film. Supers do something seemingly heroic in the opening sequence. Supers somehow fuck it up with astronomical collateral damage. Supers are now (still) illegal. Supers have to relocate and/or slink back into the shadows. Somebody— probably a super — reiterates how unfair this is. One of our supers and protagonists attempts to go out into the world as the main working parent and make things right by showing that supers aren’t all that bad and “just like us.” This leaves one of the super parents behind to hold down the family fort. The main super parent then uncovers a mass conspiracy to (systematically) get rid of supers because they kinda sorta have a childhood grudge to settle on them — even if they have a good point.

There are points where this new film deviates and attempts to make this story its own. Queer Icon Edna Mode returns and forms the unlikeliest duo with movie MVP Jack-Jack. Emo Lesbian Icon Violet Parr serves us full teenage angst as she tries to navigate the trials and tribulations of courting what we assume to be a fuckboi. IG model and super-mom Helen Parr returns as the lead protagonist and working parent this time around, which creates interesting commentary about parenting and family.

Particularly because the last film’s lead protagonist, Bob Parr, is now playing the role of the parent and career man that gets left behind (at home) and is saddled with making sure his family is okay and that the house doesn’t burn down. And of course, he, a man, assumed this was going to be easy — which makes sense because child-rearing or any other type of labor associated with women is assumed to be easy or not requiring as much effort and is devalued as a result. This quickly turns out to not be the case and he must learn to simultaneously deal with his failings in that regard and his professional jealousy where Helen is concerned in order for them both to do well and succeed as a unit and family.

Which, again, is extremely cogent stuff for a “kids’ movie.”

Still. The film is simultaneously bolstered and hampered by its over-reliance on the familiar, particularly as it concerns the villain. It is often said that [superhero] movies are only as good as their villains and TI2 is no exception. Having the film follow a similar trajectory villain-wise without the presence of someone who is as diabolical, emotional, and narcissistic as fanboy (what amazing commentary 14 YEARS later) Buddy/Syndrome certainly puts TI2 at a slight disadvantage, but I would hesitate to declare that that means that The Incredibles 2’s villain “sucks.”

While Evelyn Deavor is not as charismatic as Syndrome, she is very calculated, precise, logical, and pragmatic and could be anyone else in the film if they were to have a bad day— and boatloads of money. She reminds me of Captain America: Civil War villain Helmut Zemo. While she is no Syndrome and he certainly wasn’t Loki, they both make really sound and logical points about the downsides of relying on superheroes as some sort of catch-all failsafe for the world’s fuck ups just because they won at the randomness that is the genetic lottery and how blatantly problematic that is because it elevates superheroes to God-status (even if they don’t want that) and helps them skirt-skirt around accountability. And it works because both Evelyn and Zemo could be different people given different conditions.

Evelyn’s beef with this side of superhero ethics in particular lands in this movie because supers are assumed to be “better” because of advantageous genetics, which is supposed to translate into impeccable morals, and it is assumed that that alone qualifies them to be the sole protectors of our world because “they have better hands.” This, of course, leads non-supers to use them as a crutch. A means to an end. An excuse to have and hold instead of normal, everyday people dealing with real-world problems like crime and the conditions that create them. Evelyn sees them as a large and woefully unsustainable band-aid in that regard.

And her point is strengthened by the fact that this reliance on supers is what brought about her father’s untimely demise. So by the time she finds her and her brother on a similar path all in the name of “bringing back supers,” she’s fed up. And she is bewildered that her brother and father would be so asinine as to let supers do the heavy and inequitable societal lifting in order to “make things better” instead of just making things better themselves.

That point is particularly timely, too, as it reminds me of the way in which Black women in particular — who are ironically and dubiously absent from the film save for a disembodied voice (an apt metaphor about our value in this world) — have been propped up, dehumanized, and mythologized in our current administration.

People would rather “believe in Black women” like we’re unicorns and deify us just long enough for us to supposedly save them from some tangerine despot than put in work and elbow grease to save the republic themselves. It’s analogous, really. Folx like Winston Deavor would rather deify supers (or Black women) and charge them with fixing the world’s ills, ics, and isms than fixing it themselves, even though they have the power, privilege, and capital to do so.

Of course, those that are worried about the film getting too existential and philosophical need not worry as there are enough laughs and gags — especially where Jack Jack is concerned — to go around. This is also compounded by the astounding animation (everything was especially crisp and makes my 4K TV look like the proctor of PS1 graphics in comparison) and the hilarious soundtrack that includes in-joke theme songs for Mr. Incredible, Elasti-Girl, and Frozone.

If you’re looking for a nostalgic fix,The Incredibles 2 is for you. It does struggle a bit to differentiate itself from its predecessor, but in the end, it’s a worthy addition to the Disney/Pixar pantheon of cross-appealing “kids’ movies.”