Queer artist, stylist, and icon Judy Blame died this week at the age of 58. Best known for his work with BoyGeorge, Bjork, Kylie Minogue, and Neneh Cherry, the famed tastemaker wasbeloved by innovative artists and contemporaries, some of whom paid tribute to him on social media when they heard the news.

I have been lucky enough to know Judy. I have been so touched by their influence. I should be so lucky. Time passes us by. Time is a delicate morherfucker. I have been lost lately. What with my posts and all. My birthday is February 19th. I have felt overwhelmed , angry , sad, upset, at a loss for words. More and more all the more time passes I have been without words.. but goddamn . His passing makes me feel ill. Sick to death. Let our queer legacy live on! THRIVE ON! Let it always confuse the status quo! Let us always live to subvert ! We are powerful! Smart! Creative! Strong! RIDICULOUS ENOUGH TO KEEP ON. KEEP ON ! KEEP ON WEIRDOS! KEEP ON QUEERS! KEEP ON PPL! PWR TO US ALL WHO REFUSE TO TAKE NORMAL FOR AN ANSWER I say goodbye, Judy blame! With respect. With resilience, and with most of all fucked up style! Thank you

R.I.P to my friend Judy Blame who was beautiful, talented and arch as hell. Fashion has a huge void in it and London has lost a legend! pic.twitter.com/CcgLGiv0SP

A cultural tastemaker whose influence began in the 1980s New Romantic era, Blame (nee Chris Barnes) has created punk DIY aesthetics for artists for decades. He was a fan of silverware, chains, keys, buttons, and safety pins, and would often say, “If you don’t have it; make it.” 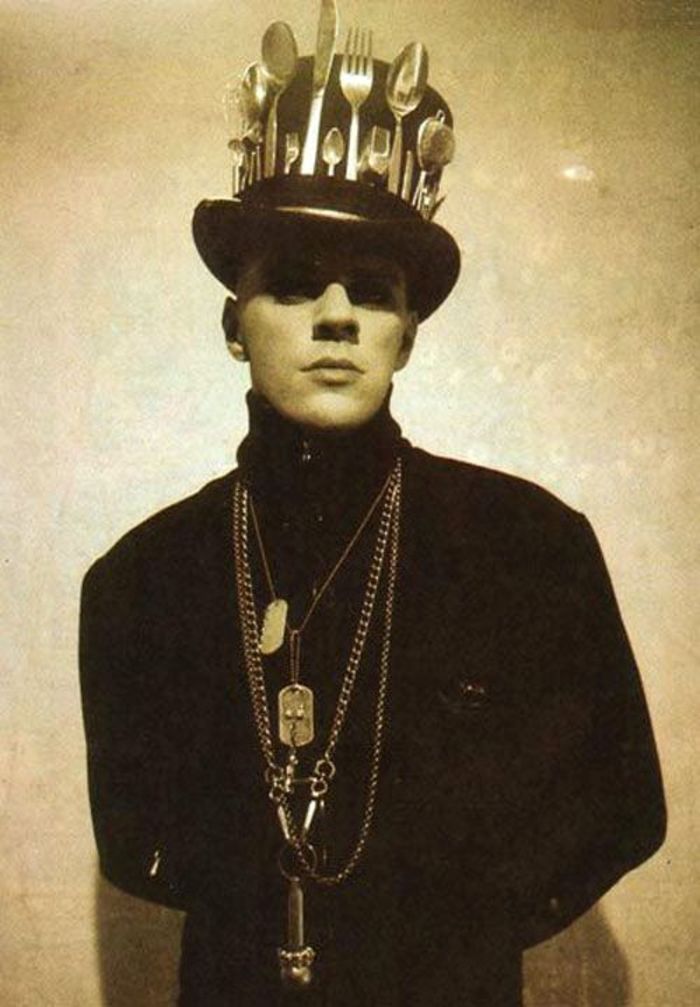 “It was a big age to experiment,” he told Interview. “To go out to nightclubs, we didn’t have much money, so I started making jewelry to change my outfit every week.”

He ran away from home (the Devonshire countryside) and spent a few years in Manchester.

“Manchester had a brilliant punk scene,” he told 023c in 2003. “There were a lot of bands, a lot of graphic people, a lot of creative people experimenting. We couldn’t really afford the Seditionaries clothes or whatever, so we would do the jumble sale, buy a suit, throw a bucket of paint over it, cut it up, join it back together with safety pins – it was much more homemade. It was better for me.” 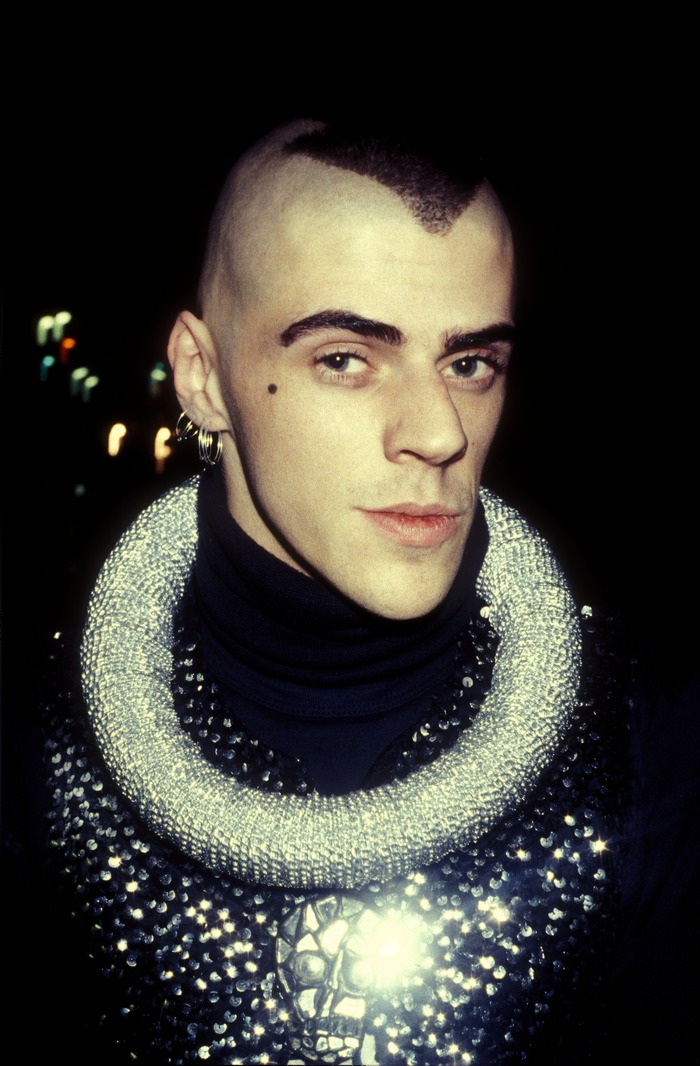 Eventually, he found himself in London, becoming part an influential collective,The House of Beauty and Culture. Along with androgynous model Scarlett Cannon and the rest of The Blitz Kids, Blame came to run a popular night, Cha-Cha Club, at London’s gay bar Heaven, where he became a staple of the nightlife scene.

Soon after, he started styling Boy George, and helped to steer the art and fashion direction for i-D magazine. He famously styled Bjork for her Debut album cover, and worked with artists like Massive Attack, Kylie Minogue, Duran Duran, and frequent collaborator Neneh Cherry. He was always unapologetic; openly gay and unwilling to closet himself no matter who his clients were.

“The business is very homophobic,” Blame told Lucy Brien, author of the book She Bop II: The Definitive History of Women in Rock, Pop and Soul. “Most people see me as a Queen Bitch, don’t mess with him. I promote the image, otherwise they just think you’re a nancy, and a lot of men feel intimidated.”

“Once Judy traveled to Iceland with me under the guise of doing wardrobe. I saw Judy at the side of the stage before I went on, he was wearing high heels and a monocle,” George said in 2016. “Judy is such an important creative force and being sober and clear-headed serves him and us because we can see how utterly genius he is. He is a game changer; he is ‘Ziggy Stylist.’ He can place a safety pin on a jacket and make it radiate cool. He’s a juxtaposer and a fashion humorist; he has this innate sense of absurdity. I have a ton of his creations and I’m keeping them!” 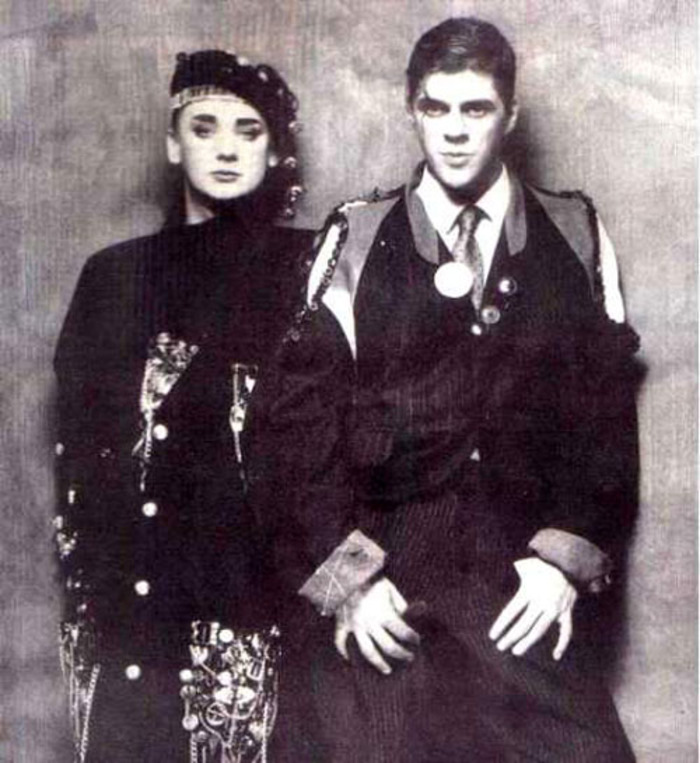 “The most generous thing Judy Blame gave me as a shy insecure beginner, was that I was enough and that my own taste and character should simply be enforced,” Bjork said. “Judy is not just a stylist but someone who sees the whole picture and the potential of what people and situations could become. I remember witnessing him switching roles very easily and simply watching a shoot, and whatever it needed he selflessly became that. Like a true catalyst. And often it wasn’t the garment at all”

In 2016, London’s ICA held a retrospective of Blame’s work, which included pieces from his earlier pieces to the work he did with and for Comme des Garçons, Leigh Bowery, Helmut Lang, Alexander McQueen, Marc Jacobs, Jean-Baptiste Mondino, Kim Jones for Louis Vuitton, Gareth Pugh, and Christopher Shannon. He had an innate way of queering style; of integrating punk into high-fashion with an eye for the beautiful absurd. He made the ’80s and ’90s more colorful, his influence felt by new generations and those still to come. He was a fan of genderfuckery, of idiosyncrasy, and of reinvention.

In a previously unpublished interview just published by i-D, Blame spoke about the retrospective and how he felt about seeing his life’s work culled together.

“It makes a difference to others, not to me. If you look at the work, and what I’ve tried to do throughout my career, I’ve never put boundaries around myself,” he says. “So yes, I work in fashion, from styling, to making things, to catwalks, to working with designers. I’ve never bordered myself in. But it means something to others, it gives a different audience access to what I dothe art crowd. But it didn’t change the way I think about the work, because at my age, the work just flows out of me, and I try to turn it into something. I don’t separate things, it’s one thing that comes out of me.” 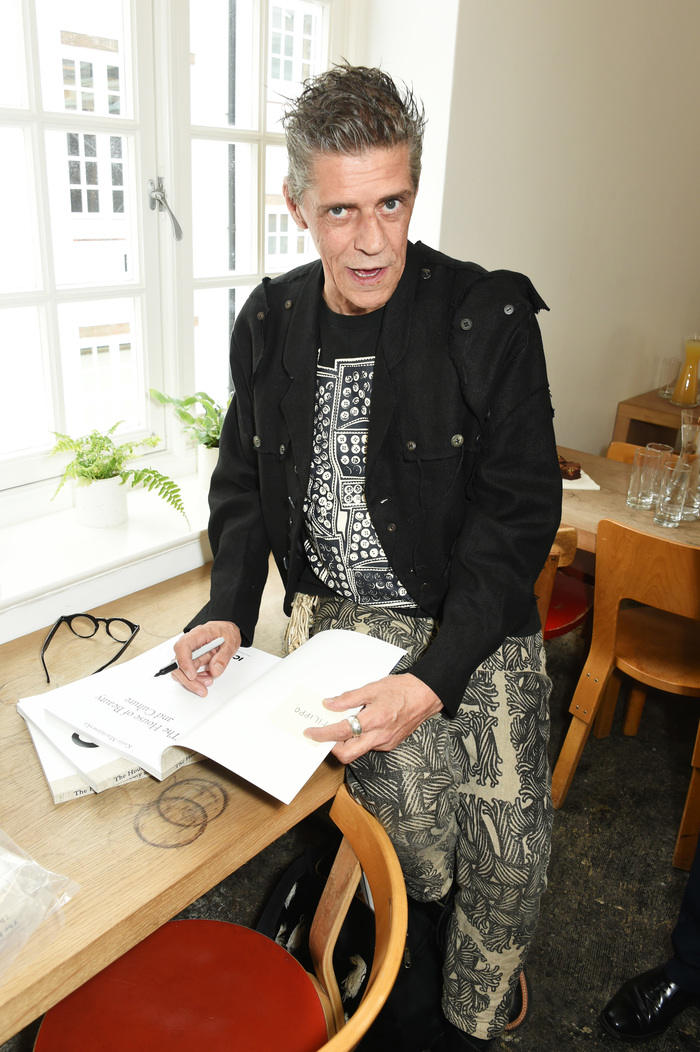 Judy Blame’s life is difficult to sum up, as he was not only prolific but incredibly quotable. He shared so much with friends and the public at large, and his presence will be missed by those who didn’t even know they knew him.

“Queens are good at blocking things out, aren’t we?” he once posed. “If it’s not too fabulous then you just don’t think about it.”

Images via Getty and ICA