When Ashman joined Disney in 1986, twenty years after Walt Disney’s death, the studio was on the verge of bankruptcy. Ashman and his creative partner, composer Alan Menken, revitalized a faltering production of The Little Mermaid, created a box office hit, won an Oscar, and essentially saved the studio. Starting with The Little Mermaid, Ashman incorporated elements of his musical theater background to create a formula that allowed Disney to enter a “renaissance” period of critical and commercial success. In a rare interview, he discussed the formula and explained, “In almost every musical ever written there’s a place; it’s usually about the third song of the evening where the leading lady sits down on something and sings about what she wants in life. And the audience falls in love with her, and roots for her to get it for the rest of the night!”

From 1989 to 1999 Disney used Ashman’s formula and scores by Alan Menken to create mega hits such as Beauty and the Beast (1991), Aladdin (1992), Pocahontas (1995), The Hunchback of Notre Dame, (1996) and Hercules (1997). Ashman died 27 years ago today without living to see Beauty and the Beast’s stunning success and lasting importance. However, Ashman’s name recently found its way back in the press with the release of Disney’s live-action Beauty and the Beast last year. Many articles suggested that Disney’s first gay character, Lefou played by Josh Gad, was an homage to Ashman. Other pieces examined Beauty and the Beast as a metaphor for the AIDS crisis. The remake’s director, Bill Condon, told to Attitude Magazine that the Beast, like Ashman, had a bodily curse that ostracized him from the public and brought sorrow to all of those who loved him. 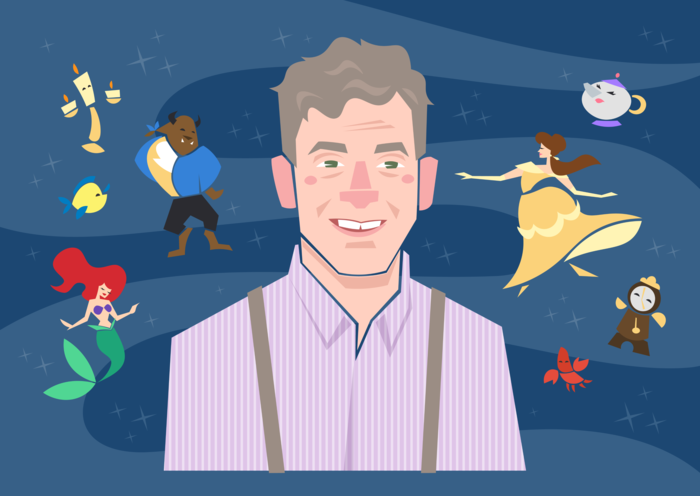 When Disney brought Ashman onto Beauty and the Beast, the story was told primarily from Belle’s perspective. By rewriting the narrative to create empathy for a misunderstood and suffering character, Ashman positioned his legacy as a living memorial to an entire generation silenced by AIDS. Perhaps he understood that being queer means you are part of something greater than yourself.

We are a culture and peoplehood with ancient roots. Like all great nations, we have ancestors, traditions, and a history of our own. Many enter their cultures at birth and are sculpted by them as they grow. Entry into our tribe is often (but not always!) preceded by a period of isolation known colloquially as being in the closet. The moment we arrive spiritually, emotionally or physically we rely on our contemporaries and elders to learn about our history. When almost the entire generation above you is wiped out that process becomes warped.

Today, Ashman should be 67 years old, and I feel a profound sense of loss. The loss to Disney, the filmmaking community, and musical canon is obvious. Ashman worked at Disney for five short years and look at what he created. What could he have done in ten or twenty? I have queer mentors exactly Ashman’s age.

They taught me things that my loving parents simply couldn’t, like the importance of bringing cowbells to a protest, who Vito Russo was, and that there was once a secret gay language. Without my mentors’ guidance and support, there is no way my friends and I could have started our activist group Voices4. To Ashman’s beloved partner Bill Lauch and his sister Shirley Gershman, please know that today you are not alone in your grief.

I would love to ask Ashman my questions and get some answers, but that is not how history works. We do not get to choose our ancestors or what happened to them. We can only grapple with their fates and honor what they left behind. I mourn and honor him as if he was a favorite uncle or older cousin.

I listen to his music, the music of my people, to keep alive the memory of a man who brought literal magic into what can sometimes be a dark world.