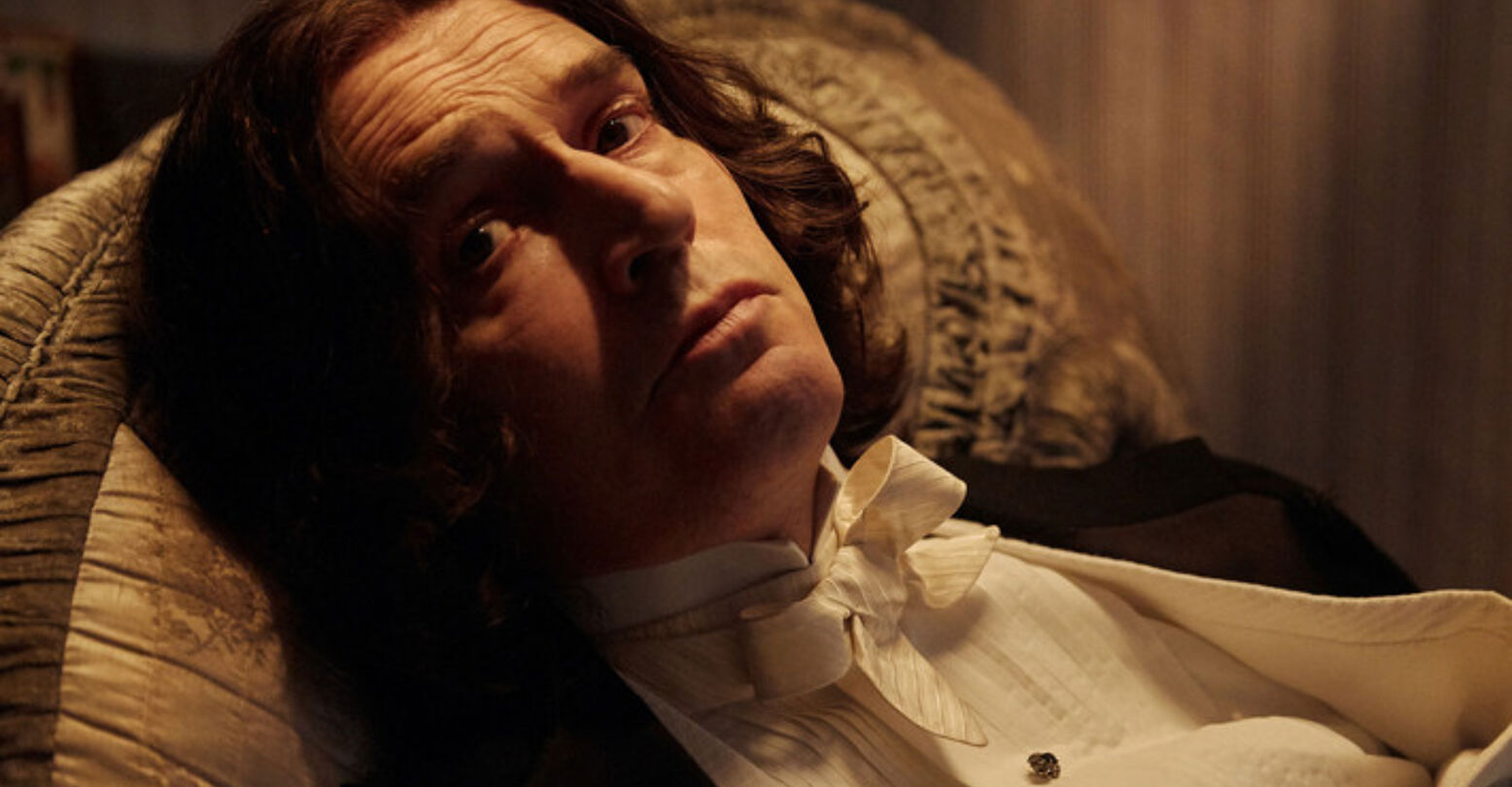 Oscar Wilde once said that “There is only one thing in life worse than being talked about, and that is not being talked about.” Fortunately for the esteemed playwright, Hollywood continues to find inspiration in his work even though a century has passed since his death on November 30, 1900. Wilde’s various forays into the realm of literature and his life as an openly gay aristocrat in the 19th century have been the subject of various films over the years, some of which vary wildly in quality, but a new effort from Rupert Everett is one of the best yet.

Directed by Everett who also stars in the lead role, The Happy Prince captures the final years of Wilde’s life with the razor-sharp wit that he was best known for. However, the same can’t be said for every film that’s been inspired by his work, so join us as we venture on a journey through the most prominent pictures of the literary icon and explore the history of The Happy Prince on film. 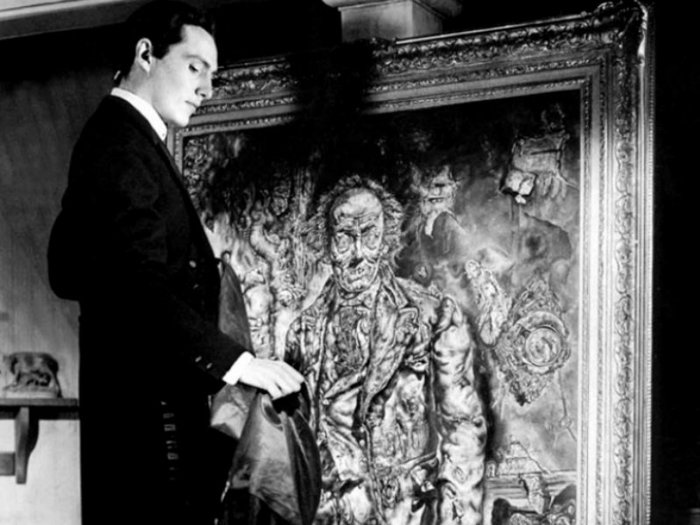 24 films and shows have pushed Wilde’s most iconic creation to the fore since The Picture of Dorian Gray was first published in 1890, back before motion pictures had taken the world by storm. However, you might be surprised to learn that Hollywood was beaten to the punch in 1910 by a Danish director called Axel Strøm who was the first to adapt Dorian Gray’s story just 20 years after the book was released.

Starring Valdemar Psilander in the title role, Portrait was a silent take on the story of a hedonistic aristocrat who remains eternally young while a special painting gradually reveals the ugliness of his soul. Gray’s double life and his controversial journey into the pleasure of sin undoubtedly reflects Wilde’s own personality, but this and numerous other adaptations that followed tried to downplay the homoeroticism of the book the best they could. 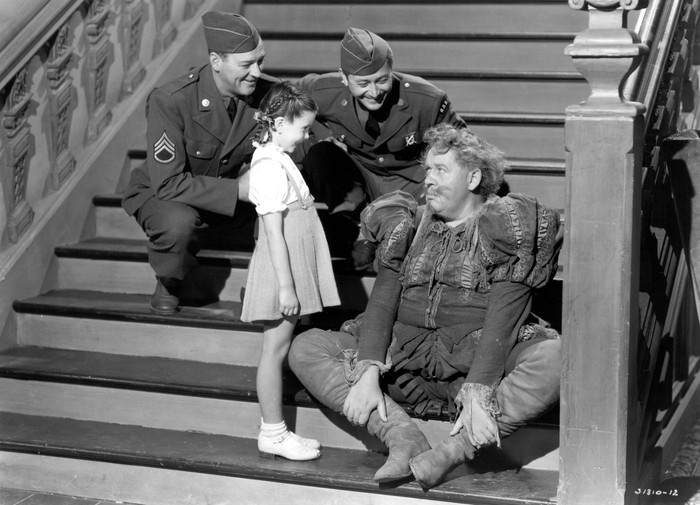 Modern audiences might associate Wilde’s infamous short story most readily with the TV adaptation that starred Patrick Stewart in 1996, but Jules Dassin’s take on The Canterville Ghost is arguably the best. Starring Charles Laughton as a ghost who haunts an English castle, this version plays around with comedy and horror while reminding audiences of Wilde’s ability to subvert genre in ways rarely seen before. 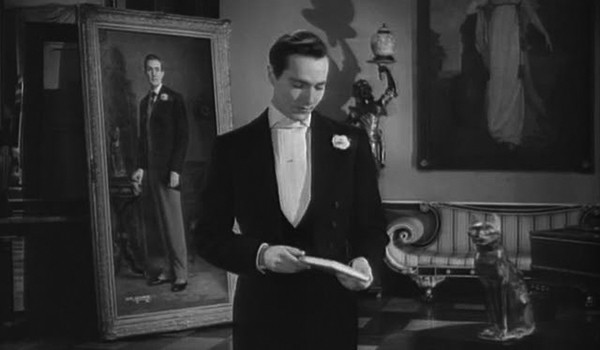 Our second adaptation of The Picture of Dorian Gray on this list is notable for its recognition at the Academy Awards. Even now, the Oscars rarely give prizes out to fantasy movies, yet Albert Lewin’s take on Wilde’s novel was nominated for three awards and took a statue home for Best Cinematography, Black-and-White. Most surprisingly of all though, one of these nominations was given to Angela Lansbury for her role as Sibyl Vane, decades before a whole new generation fell in love with her for the lead part in Murder, She Wrote. 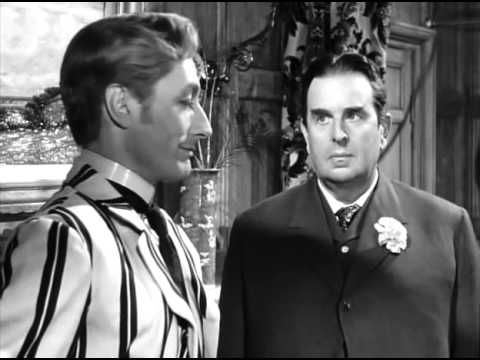 Two films detailing the life of Oscar Wilde were released in 1960 and even more surprisingly, both also hit cinemas in the last week of May. While The Trials of Oscar Wilde was received favorably for its technicolor take on the playwright, the film simply titled Oscar Wilde didn’t fare as well due to its lower budget. What’s most interesting about this version of the story though is that an attempted seduction scene was cut from the final release, presumably because audiences might have been put off by seeing such explicit homosexual activity on the big screen. 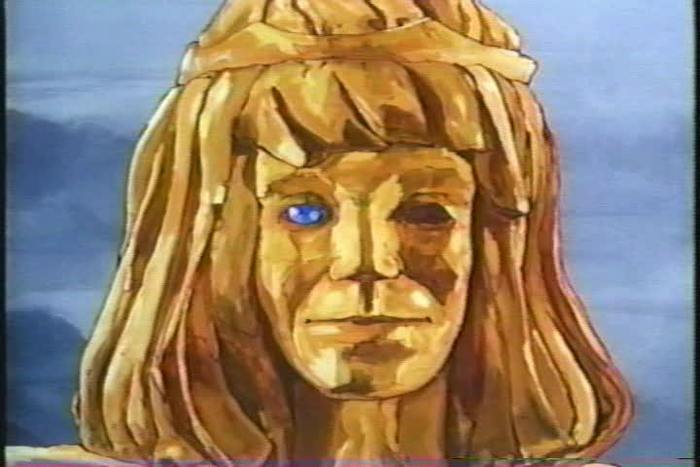 Throughout Rupert Everett’s new biopic, Wilde tells the story of The Happy Prince to his children and that’s what gives the film its name, but this isn’t the first time that a movie has taken that title. Back in 1974, director Michael Mills tackled this tale of a statue who befriends a swallow through the medium of animation. At just 25 minutes long, this version of The Happy Prince is certainly worth watching and remains one of the few child-friendly adaptations of Wilde’s work. 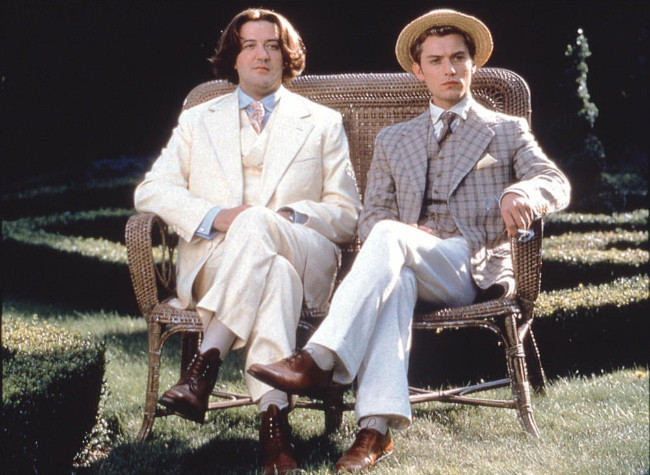 While there have been many Oscar Wilde biopics over the years, few capture the sheer gusto and wit of the legendary playwright like Wilde, which stars British comedian Stephen Fry in the role that he was seemingly born to play. For his efforts, Fry won a Golden Globe nomination, and the film is also notable for including the first appearance of Orlando Bloom on screen. As Fry is openly gay in real life, he admitted on the DVD commentary that he was nervous about acting out love scenes with his male co-stars, but fortunately, Jude Law, Michael Sheen and Ioan Gruffudd all put him at ease on set. 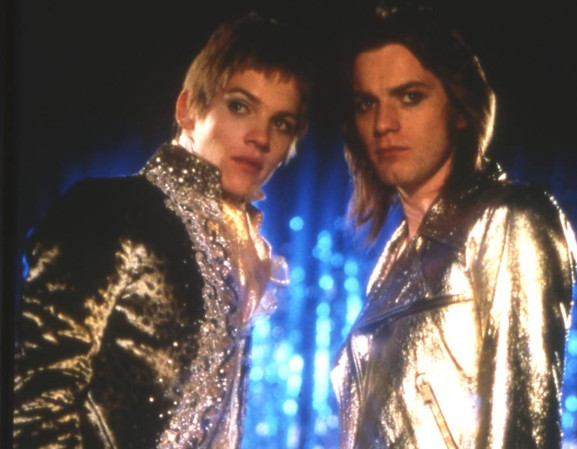 On the surface, this story of a fictional glam rock star shares little with the life of Oscar Wilde other than a flair for the flamboyant and is inspired more directly by musicians such as David Bowie instead. However, anyone who’s seen Todd Haynes’ queer infused drama will know that Wilde’s ideas are quoted throughout the film. Most bizarrely of all though, Velvet Goldmine actually opens with an intro that theorizes how the dead playwright was brought to earth by aliens to father what would become the glam-rock movement. Wilde really was one of a kind, although his extraterrestrial origins may have been somewhat exaggerated.

The Importance Of Being Earnest (2002) 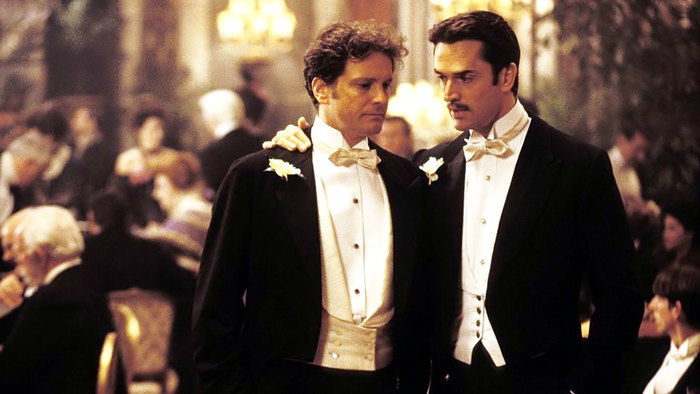 16 years before Rupert Everett played Oscar Wilde in The Happy Prince, he starred as one of the playwright’s most famous characters in The Importance Of Being Earnest. Based on Wilde’s classic comedy of mistaken identity, this period drama also starred Colin Firth, Judi Dench, and Reese Witherspoon, but director Oliver Parker failed to bring the wit of the source material to life and the film ended up scoring just 57 percent on Rotten Tomatoes. Saying that though, this version of The Importance Of Being Earnest is still worth watching just for the scenes where Everett surprised Firth by slapping him on the ass and squeezing in an improvised kiss for good measure.

The League of Extraordinary Gentlemen (2003) 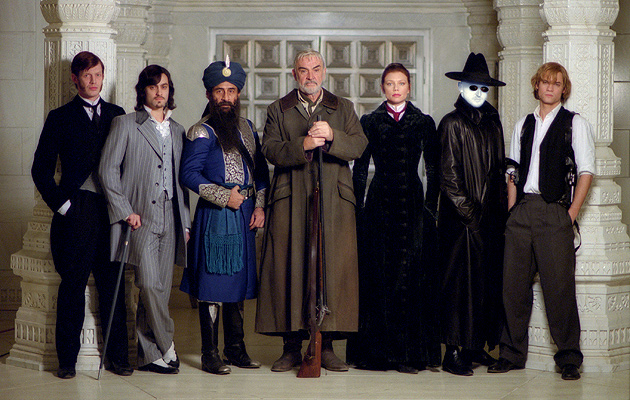 Comic book creator Alan Moore denounced Hollywood when it was revealed that his series The League of Extraordinary Gentlemen would be translated to celluloid, yet audiences couldn’t help but enjoy seeing literary icons such as Tom Sawyer and Captain Nemo team up on the big screen. Among the various Victorian characters who star in the film, Dorian Gray ends up playing a prominent role in what’s arguably the strangest adaptation of Wilde’s work to date, using his immortality as a kind of superpower in the fight against evil. 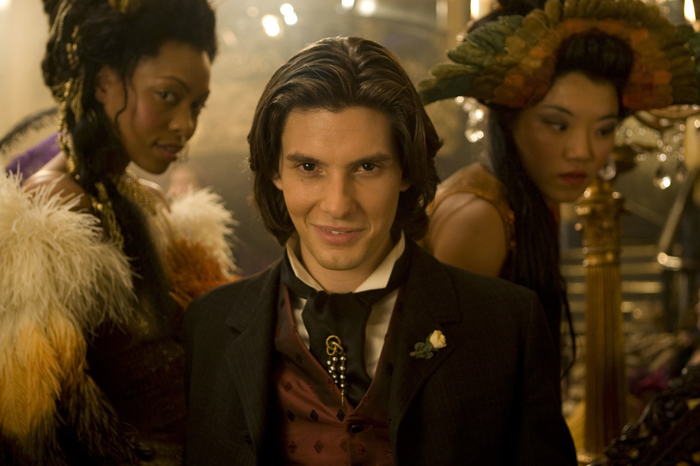 Despite the lacklustre reception that The Importance Of Being Earnest received in 2002, director Oliver Parker returned to the work of Wilde once more to create yet another adaptation of his novel The Picture of Dorian Gray. Reimagined as a more generic horror feature, this interpretation of Dorian Gray’s story has already aged worse than the picture itself, but Colin Firth reunites with Parker to give his best in the role of Lord Henry Wotton and Ben Barnes impresses as the gorgeous Englishman who strives to party for eternity. 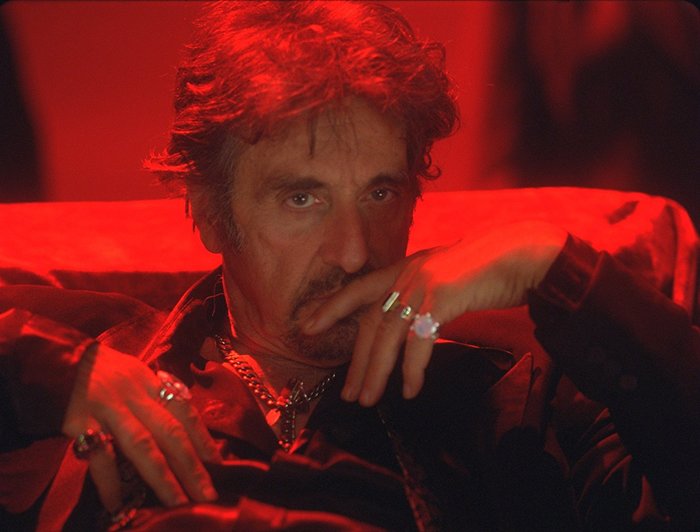 Although Al Pacino isn’t the box office draw that he once was, his documentary about the making of Wilde’s play Saloméis an amusing take on the theatricality of the playwright’s work. Taking us behind the scenes of Pacino’s production, Wilde Salomé revolves around the story of King Herod and features a star-making turn from a then 29-year-old Jessica Chastain. This in turn produced a movie adaptation in 2013 simply titled Salomé and yes, this is all as confusing as it sounds. In Wilde Salomé, Pacino states that “I’m doing a play, a movie of the play, and I’m doing a documentary all at the same time,” something which Wilde himself would surely commend Pacino for if he were still around today. 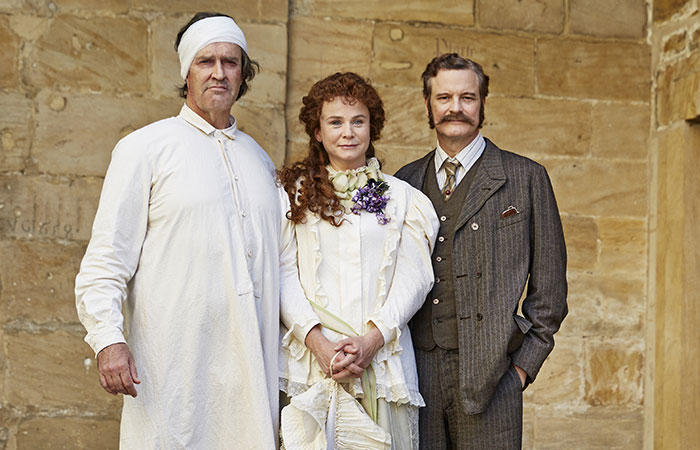 Rupert Everett wrote the script for The Happy Prince over a decade ago, and it’s easy to see why he’s pursued this dream project for so long. Much like Wilde was ostracized by society in his final years, Everett too found that his career suffered after he came out as gay. It’s only fitting then that he would also star as the playwright in this biopic that touches on the darker aspects of Wilde’s final days. Most movies avoid exploring what happened to the playwright after his incarceration, but Everett’s assured script and direction dive deep into his life towards the end, retaining Wilde’s sardonic reverence for pleasure while also pushing his courage and convictions to the fore.

Wilde himself said that “One can survive everything nowadays except death,” yet the work he left behind has left an unforgettable mark on pop culture that ensures he will live on forever. Perhaps somewhere there is a picture of Oscar Wilde hidden that continues to age as his own legacy shines brighter than ever before.