To many in the mainstream, the drag queen is a source of entertainment that comes from the fact that she is a man in a dress. Those involved in queer culture recognize the true value her exaggerated makeup and camp flair brings to LGBTQ visibility. She is the custodian of queer history and pop culture. And this has relegated her to her rightful place as the jewel in the glittering crown of LGBTQ counterculture.

Drag was initially a form of self-expression that helped push back against the heteronormative patriarchal society that disparaged anyone deemed as “other.” But recent years have seen a paradigm shift in attitudes towards drag and how drag has evolved through the gaze of an outsider. The slow change has seen the drag queens’ reign over a smaller court of like-minded peers transcend to ruling the entire world stage.

In 1996, RuPaul was the reigning queen who appeared not just in films and at clubs, but in a now famous campaign for L.A. Eyeworks. 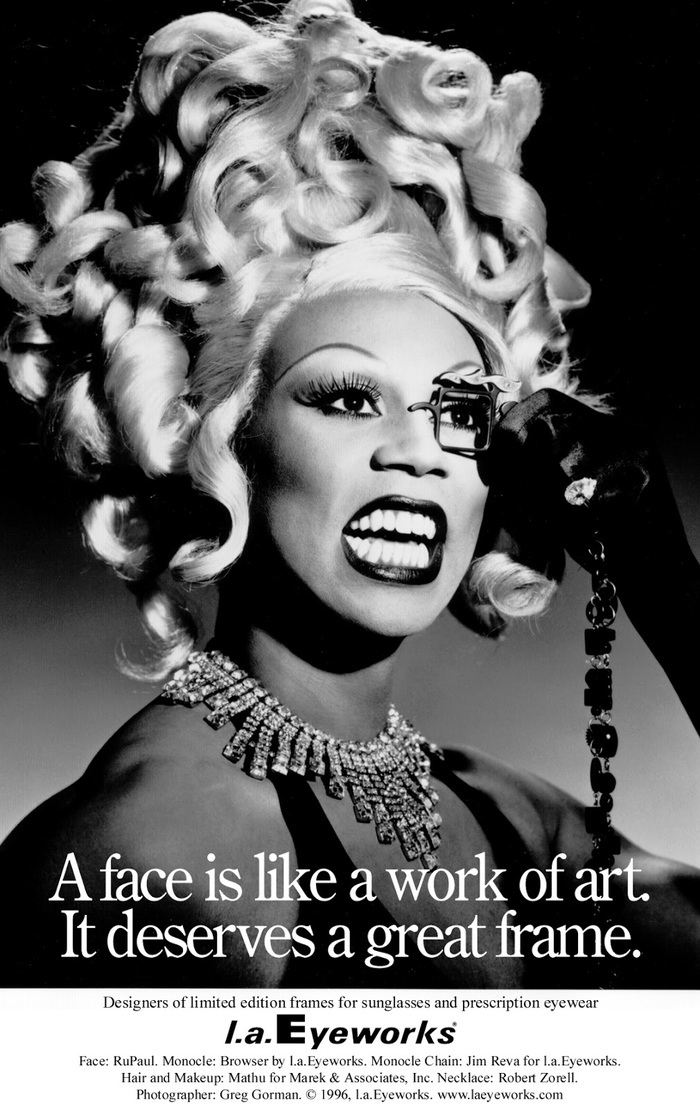 More than 10 years later, the success of Drag Race has given way to the idea that drag queens are not only fun to watch, but profitable.

This year’s RuPaul’s Drag Race All Stars 3 found a bigger audience than the show had ever enjoyed. The March 1 episode―which saw the eliminated queens return―was the most watched in the franchise’s entire history. It was also the number one cable show that day on social media with 521.6k interactions. Indeed, memes of the show have peppered social media since. The more mainstream VH1’s All Stars 3 was up 195% in total viewers from 2016’s All Stars 2 on the more niche Logo network.

This had impact internationally. Across the pond, advertisements featuring drag queens in a way that didn’t deride or mock were featured on British TV and online. While this was done in the name of equality and inclusion, it showed that something else was happening to drag. Not only was it being viewed by the mainstream in a respectful and understanding way, but, like with every aspect of culture, it was being used as a tool in advertising. And this is very important.

In February, Australian singing sensation and runner-up of Drag Race Season 6 Courtney Act won Celebrity Big Brother UK, beating conservative politician Ann Widdecombe. Courtney’s candid discussions with her opponent―whose parliamentary career had been adverse to LGBTQ rights―shed light on the duality of being a drag queen. That kind of visibility and voice is still too rare, but things are changing as advertisers pick up on drag queen marketability. 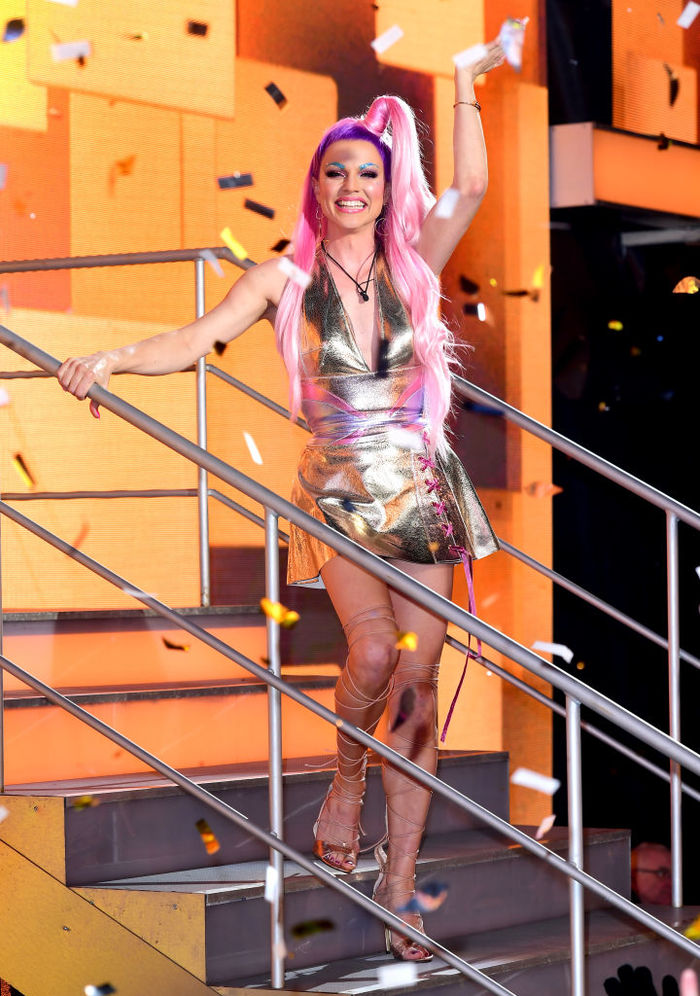 Travel aggregator Orbitz utilized drag queens in their ads way back in 2012 to tie into the airing of RuPaul’s Drag Race All Stars, and again in 2017 featuring Bianca Del Rio. The ads were used to showcase the LGBTQ-friendly resorts. Their early ads may have been among the first to utilize drag queens (specifically Latrice Royale, Manila Luzon, and Raven ) as symbolic representation of the LGBTQ community, for the LGBTQ community.

It’s when drag queens were used to advertise outwards of their sphere of influence that real change began to happen.

As a marketing proposition, cornflakes are both a blessing and a curse. For some, the idea of peddling a product with a solid reputation in an innovative way can be exhausting. For others, the blank canvas of expression can spark the sharpest creativity. The latest ad campaign from Kellogg’s features a slew of people explaining when they like to have a bowl of cornflakes. The ad cleverly takes members of the entire gamut of society―including a pair of drag queens.

Given the nocturnal nature of their work drag queens return home on weary feet in the early hours, so provide a good example of night workers who may enjoy their cereal then. They also represent a modernity and cosmopolitanism in a bold move to show that British society should be embraced for the vastness and difference on offer. They are as much a part of the fabric of society as hospital workers or students. They have fought to be recognized, and in doing so, symbolize the LGBTQ community they represent.

The Toyota Aygo ad campaign features segments with four drag queens who are given the chance to express themselves with the new model, under the theme of “Go Your Own Way.” The idea combines the Toyota Aygo’s style and independence with those of drag queens.

Toyota amalgamates the flair and attitude the car model should evoke under the brand’s umbrella with the attitude and symbolism of the drag queens. Ultimately, the car helps tell the message that you can be whoever you are and you should embrace that uniqueness, just like the car does. Who else embodies this better than drag queens? It’s not selling the car so much as it’s selling the way of life the car brings you–the way of life embodied by drag.

To be featured in a digital ad campaign means that the company feels the subject is relatable enough for the general population. The embracing of drag culture helps dispel myths and misunderstandings that placed a taboo on the art form, and on LGBTQ culture as a whole. The commercials choose to focus on LGBTQ inclusion by showcasing one of the strongest symbols of the community. The inclusion works as small steps, particularly the way Kellogg’s use drag queens as people who have antisocial working hours. But it would be interesting to see the gambit of drag queens that are featured in the future, for example, non-white drag queens or ones over 45 to reflect the entire microcosm of the drag community.

But drag is also a political act. Every time a drag queen dons her lace-front wig and her sequined gown she is making a statement. She is proud and celebratory; a totem of counterculture who has fought for years to retain her crown. So, does hijacking drag queen eleganza to sell a car take away some of the political might by attempting to appeal to the conventional? Does becoming an aspect of mainstream culture, incorporated into the Ed Sheeran-loving masses, cheapen the importance of drag and its history?

German mattress retailer Muun utilises RPDR’s Season 5 winner Jinkx Monsoon as part of their “Choose Your Comfort” campaign, where she talks about her first time in drag at an LGBTQ dance. Starbucks paired with OUTtv to show the power that coffee has to bring two sparring drag queensAdore Delano and Bianca Del Riotogether. But the narrative focuses less on the products or any storyline other thanthat they are drag queens.

With Jinkx’s mattress ad, they could have replaced the mattress with almost any other product or service to capture the same effect of her choosing the path that was right for her. This leans slightly towards tokenism, which works to dampen the image of the all-powerful drag queen.

In the latter 20th Century, the esoteric nature of drag had to exist. Drag had to be exclusive to the community and its close allies for matters of safety and protection. In Columbus, Ohio in 1848, it was enshrined into law that one couldn’t wear the dress intended for the opposite sex, in a series of laws that spread across more than 40 cities in the USA. In 1977, 53 people were arrested in Houston, Texas under their 1861 anti cross-dressing ordinance. As late as 2007 in Delcambre, Louisiana it became “unlawful” to wear clothing appointed to the opposite sex.

But now the world of drag is opening its doors to the mainstream. There is still a degree of esotericism, noticeable in the single-word cryptic conversations stimulated by drag culture on TV. In the way that patriarchal heteronormative society males would exchange conversation about sports, the LGBTQ community can do so about drag. Drag is currency between those in the community; what was once a closed club has flung open its doors to the world.

Bringing drag out of the night and into the light doesn’t take away the rich political history in the fight for equality. Showcasing the glitz and glamour of drag works to tell the mainstream that drag is accepted. But not only that–drag is now celebrated, as is LGBTQ culture. The mainstream can view and appreciate drag, but, for the first time, they are on the outside looking in. They may hold the gaze, but it is exactly where the drag queen wants it to be.

“Ultimately we want straight married men with children appreciating queer culture,” Courtney Act said of her win. Her goal on CBB and for the drag community as advertising spokespeople is ultimately to educate, to inform and to inspire. The use of drag in advertising–or dragvertising–is a positive, if tentative, step forward in the fight for equality via visibility. From the brand , who trusts in drag and embraces the very political symbolism that it evokes to usher in a new generation of thought and feeling, charging itself with political might. But also from the unwitting mainstream heteronormative societywhose exposure to drag offers a level of understanding and acceptance.