In 2015, Los Angeles natives Cleo Tucker and Harmony Tividad released their breakthrough EP Before the World Was Big. Pitchfork deemed the project “a quiet album with uncommon intensity” while The New York Times described it as “chilling” with “loud, force-field union passages.”

The difference in the listening experience between each of the reviewers – one of whom felt the album was quietly visceral, and the other who picked up on a more vehement sense of rage – perfectly encapsulates the duality of Girlpool’s music.

Weaving effortlessly between a soundscape that is as whimsical as a promenade through the best parts of Alice’s Wonderland, and its darker, more insidious underbelly (where the Red Queen and Jabberwocky roam), the band manages to channel a complex range of emotion into harmonious, feather-light vocals.

“One of us will usually bring a song to the other if we feel they could assist in any kind of expansion of the written word or sound,” said Tividad of the band’s writing process. “If there’s a topic I want to talk about with harmony and I feel like a back and forth conversation will create a more fulfilling representation of that feeling then we’ll work together.” 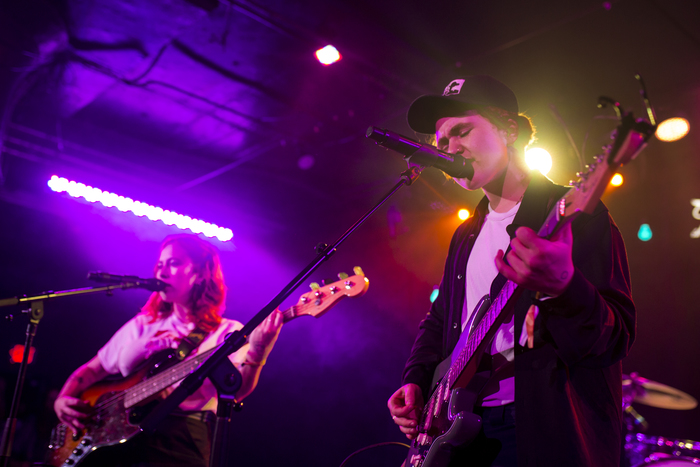 The duo, who relocated to Philadelphia shortly before the release of BTWWB, quickly situated themselves firmly at the center of the city’s buzzing underground music scene.

Though they’ve since moved back to Los Angeles, Tucker and Tividad recently performed a sold-out show for Red Bull’s 3 Days in Philly concert series at the Underground Arts Center. From the venue’s cozy, neon-lit stage, the two ran through a litany of songs from their first project, as well as offerings from Powerplant, which released in May of 2017.

Their sophomore effort, which also garnered critical acclaim with reviewers, was defined by a slightly larger scope of sound, thanks in part to the addition of drummer Miles Wintner.

Outside of Wintner, the project displayed just how much Tucker and Tividad’s worldview had changed in only two years. Not only had they had grown separately, but they’d evolved together, as had their friendship. The result is an album that illustrates a departure from the misty-eyed yearning simplicity of Before the World Was Big. Instead, the duo moved toward a slightly more morose timbre, reflecting on the whirlwind nature of their new lives in more nuanced shades of gray.

Yet it was not the subtle evolution of their music and lyrics, or their rendition of crowd favorites like “Chinatown” or “Powerplant” that defined this particular concert, it was the community and feeling of camaraderie that seeped from the stage, washing over the audience in analgesic waves.

Within the walls of a Girlpool performance, the audience, through Tucker and Tividad’s unabashed emphasis on the necessity of strong friendships, was reminded of the transcendent power of both companionship and acceptance.

“We’ve been friends for five years. I think Girlpool is a picture of the evolution of our closeness and captures our dynamic well,” explained Tividad, further stating, “We have stretched each other and have been present with each other through many experiences and life changes, and from that have inevitably pushed and grown from each other.”

One of those life changes occurred in May of this year when Tucker came out as gender non-binary.

The revelation was met with nothing short of support from Tividad and Girlpool’s fanbase. In fact, the accepting nature of the band and their ability to communicate the beauty, uncertainty, and angst of the maturation process (and how strong friendships can see you through difficult times), is part of what makes their live show experience so wholly unique.

“We value being inclusive in all aspects of our life, and it naturally spills into our music,” explained Tucker. “The people who come to our shows and discover our music are hopefully on the same page.” 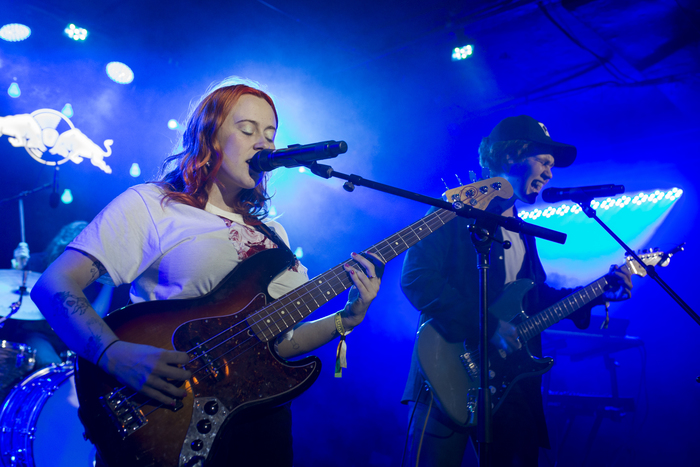 Indeed, the crowd was a direct reflection of this ethos. Gay and lesbian couples slow-danced next to hetero couples; PoC made up nearly half of the audience; even the age range of the attendees, some of whom were in their mid to late 30s, was broader than expected for a band that has been described as talented translators of teen angst.

Yet even with the incredible amount of representation, Tividad and Tucker treated it as something refreshingly unremarkable, and in their world, perhaps it is. However, historically (and in the larger world) this hasn’t been a precedent.

Girlpool’s alt-rock leaning sound is derived from musical traditions that haven’t always been inclusive of women or PoC. Consider the genesis of rock music, which evolved throughout the 1940s and 1950s as an offshoot of African-American musical styles, even while the creations of black people were largely ignored within that space.

As the genre matured, it was dominated almost exclusively by cisgender white males, with the exception of a few all-women bands or women band members. It wasn’t until the onset of the punk movement which also eventually birthed the Riot Grrrl movement that large-scale conversations about the inclusion and capability of women within the genre occurred.

Even when it did, the conversation was deeply intertwined with the rhetoric associated with third-wave feminism, which was only beginning to recognize the importance of intersection. So even while women were beginning to force society to allow them to take center stage, there was still very little consideration given to the experiences or inclusion of women of color specifically.

Today that very same conversation is still occurring because inclusion within music is still a glaring issue across the board. Festivals like Afropunk, for instance, were created to provide space for PoC and LGBTQIA people who were interested in alternative music and didn’t feel welcome within more mainstream spaces.

And, as Huffington Post reported last year, even within the festival circuit, socially-conscious events like Afropunk are rare. In fact, within the past five years, male acts made up 66 percent of major festival lineups.

Those very same male acts (with the exception of hip-hop headliners) also skewed heavily white and cisgender. Such statistics make it clear that we’ve still got a long way to go towards equality.

But, bands like Girlpool who are using the power of friendship to create inclusive spaces, are helping move the dial forward. 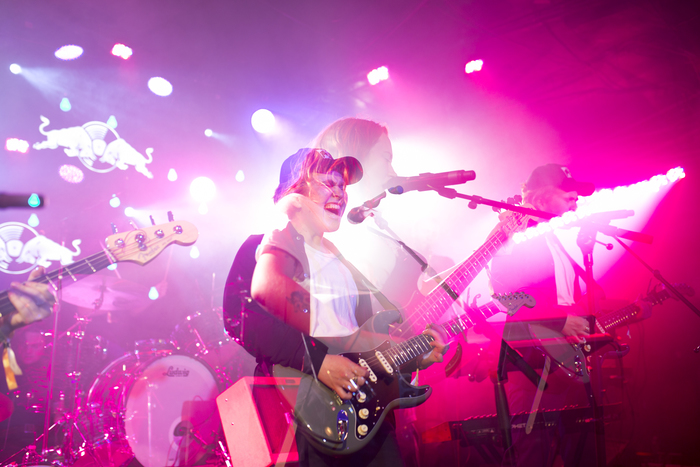