David Freyne’s directorial debut is a new take on the post-zombie apocalypse; about what happens when a potential cure is found, and anyone who has been infected is rehabilitated and sent back out into the world. But when you’ve been a cannibalistic murderer who has killed your own family and friends, it’s almost impossible to feel human againespecially because the rest of society isn’t so thrilled or convinced about your reentry.

The Cured stars Ellen Page as Abbie, a widowed mother of a young son, and Sam Keeley, who plays Senan, the brother of Abbie’s late husband. Senan survived being turned, and has been sequestered inside a camp until deemed “cured” of what the Irish refer to as the Maze Virus. Abbie is the only family member willing to take Senan in, a forgiving woman looking for a way to keep a connection to the love she lost. It’s revealed early on, however, that Senan killed his brother when he was turned, and he is keeping that fact from Abbie, as well as his secret friendship with another newly released “cured” zombie, Conor (Tom Vaughan-Lawlor).

Senan and Conor have a close connection that is threatened by their difference of opinion about reentrySenan is hopeful for rehabilitation and normalcy, but tortured by having killed his brother. No one will hire the curedthey are treated like ex-consand though Senan has Abbie’s support, Conor is rejected by his own family. Disillusioned, he joins a brigade of likeminded rebels who seek to destroy what is left of the world that shuns them, and attempts to recruit Senan, too.

Freyne tells INTO he’s always loved zombie films, but he wanted to tell the story of what happened after others (like 28 Days Later) ended. He also hoped to draw parallels to the recession that was happening in Europe at the time he started writing the screenplay, but also modern war and how soldiers return from battle, dealing with severe PTSD. The out filmmaker says his early research provided a look at how two people sharing the same life-changing experience can handle the aftermath so differently.

“Some of the soldiers are so haunted by what they did,” he says. “You have others who can kind of mastermind and say ‘That wasn’t me.’ [Those two perspectives are] logical and real and authentic, and it seemed like a nice way to do the two male main charactersone who is very sort of stricken with guilt and grief, and the other one who can rationalize it.” 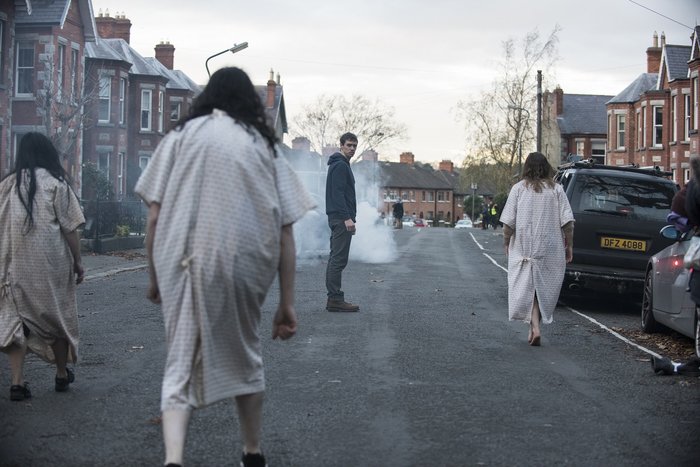 There’s also, Freyne notes, a homoerotic tension between Senan and Conor, and also an allegory to how the world reacted to the AIDS epidemic. Personally, he says, it was an influence for his own growing up in Catholic Ireland.

“That very much so manifested with how some characters feel,” he says. “[They] feel like they have to suppress something; feel like they’re wrong or evil.”

Outside of Senan and Conor, Freyne also included a lesbian couple with a complicated love story among the casta researcher trying to test cures uses her infected wife as a patient. Their being two women is presented as normally as any other relationship in the film, which was due to Freyne’s wanting to make sure LGBTQs could find themselves in his work.

“It’s very, very important to me that it was visibility in this,” he says. “There’s the subtext of [Senan and Conor], but you have characters in which it’s not just subtext. It’s not just a suggestion. It’s there, and it’s kind of not a big deal. And watching Buffy and Willow [in Buffy the Vampire Slayer] when I was a kid, that was huge, because you never see [queer relationships] and you still don’t see [them] in film. You see it more and more in TV, which is great, but in film, it just seems like such a big deal. And it shouldn’t be a big deal.”

Especially, he says, in genre films, as most of the time, LGBTQ characters are either non-existent or part of a large ensemble with little development or purpose.

“I really want more visibility in all genres, not just in drama films, which kind of consumes it,” Freyne says. “We should be in all these films, and we should superheroes, and we should be everything. … We just need filmmakers to do this and write it like it’s not a big deal. Write the characters you want to write in respect of your world, and of everyone’s world. Not just queer people, but straight people, toothey all have gay friends and it should be everyone’s world.”

Freyne also queered The Cured by casting Ellen Page in one of the leading roles. While her part is heterosexual, fans of the out actress will appreciate her character’s strength and resilience at a time when everyone around her is crumbling, weak and scared of what it means to live amongst those who have quite literally eaten their own.

“I had never seen her play a mother before and I thought this would just be so great for her,” Freyne says, who first saw Page in Hard Candy. “It’s kind of something different for her. … She is such a good, talented, and emotional actor. She really just kind of brings an incredible complexity in a very subtle way to everything she does.”

The Cured provides a kind of layered social commentary that ensures viewers will find different elements relatable or more obvious. A queer audience might see Senan and Conor’s fight over assimilation vs. rebelry as a direct comparison to the decades-long in-fighting for LGBTQ liberation. Or a conversation about victims of AIDS being treated like pariahs in a society who prefers fear to providing education and compassion. But what comes across the strongest in The Cured is not that people are largely unkind and selfish and ultimately zombie-like themselves, but that they have the continuous capacity to access a kind of humanity that is available to all humans, should they believe in harnessing that kind of power. Luckily for queer viewers, that extends to us, too, this time.

The Cured is in select theaters and on demand now.