This past week a milestone went unnoticed by indie music fans. On July 25, Donkey, the sophomore album of the Brazilian dance-rock band CSS, turned 10 years old. After their breakout song “Music Is My Hot Hot Sex” was featured in an iPod commercial, the party-hungry group of five ladies and a dude led by their yowling lead singer Lovefoxxx fell from grace, except in the minds of queer fans.

When Pearl toured after placing in the top three on Season 7 of RuPaul’s Drag Race, she performed CSS’s “Alala.”  “Let’s Make Love and Listen to Death From Above” is still a huge hit at parties, and the short teaser for indie queer coming of age story Kiki & the MXfits heavily features one of the band’s later songs “Into the Sun.”

“We have a lot of gay fans,” the band’s guitarist Ana Rezende said in a 2013 interview with Houston’s OutSmart Magazine. “It’s actually been a really big part of the fanbase since the beginning.”

With a fab femme lead singer rocking bedazzled catsuits, out queer members, and a catalog of disco-punk odes to art bitches and wild nights, CSS deserve to be put in the queer hall of fame. 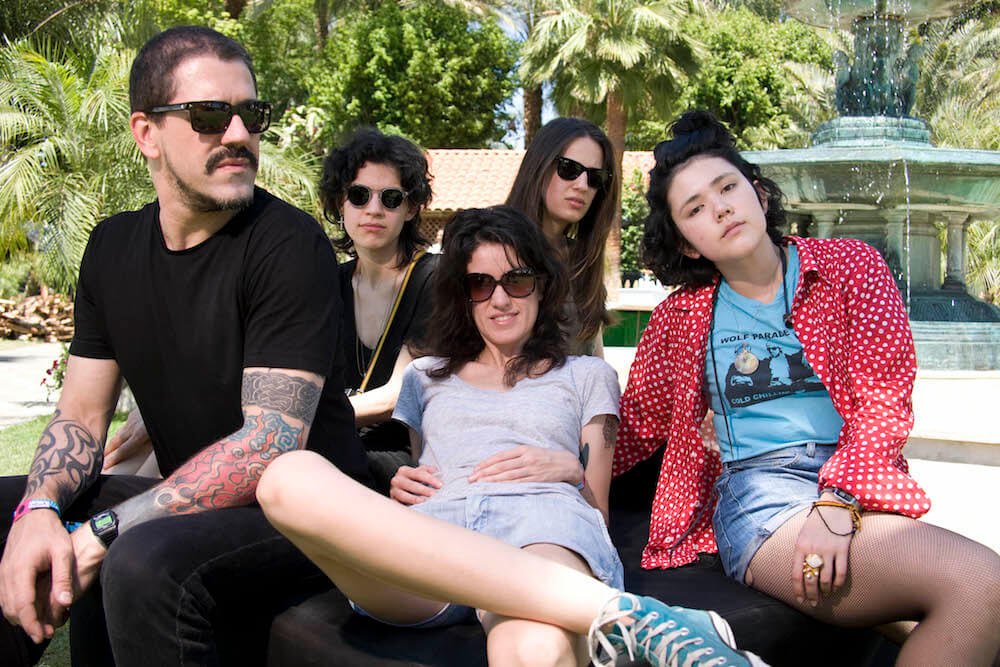 Despite having massive hype and a strong gay fanbase right off that bat, the Brazilian band has always received shade from critics.

“CSS’s whole fast-and-cheap aesthetic is more fun to think about than to actually hear; more often than not, their songs end up sounding like the crappy filler tracks from the first Le Tigre album,” Tom Breihan wrote about the group’s debut self-titled album on Pitchfork. In a review of their third album, Rolling Stone described their music as “intensely annoying.”

Honestly, they had a point. The group’s buzzsaw guitars, tinny programmed drums, and cheesy synths were reminiscent of other groups on the scene, and maybe not everyone’s cup of tea, but CSS pushed the post-electroclash sound to its extreme. This aesthetic, even in its ugliness, was precisely what endeared the group to queer fans.

The straight critics largely missed the camp value. In her essay “Notes on Camp,” Susan Sontag described the peculiar nature of camp, something gays have trafficked in for a long time: “The way of Camp, is not in terms of beauty, but in terms of the degree of artifice, of stylization.” CSS were stylized and artificial in a way that only a band made up of fashion workers and graphic designers could be.

Lovefoxxx’s whole persona was rigidly set. She was a pouty hedonistic art raver clad in rainbow leggings and bedazzled catsuits by Peggy Noland. Gay men love a drunken party girl, and Lovefoxxx was so over the top (three xs!) that you couldn’t help but laugh and cheer her on. Sure her shtick ripped off Karen O’s whole persona with a little bit of M.I.A. thrown in, but it didn’t matter. She committed and we lapped it up. 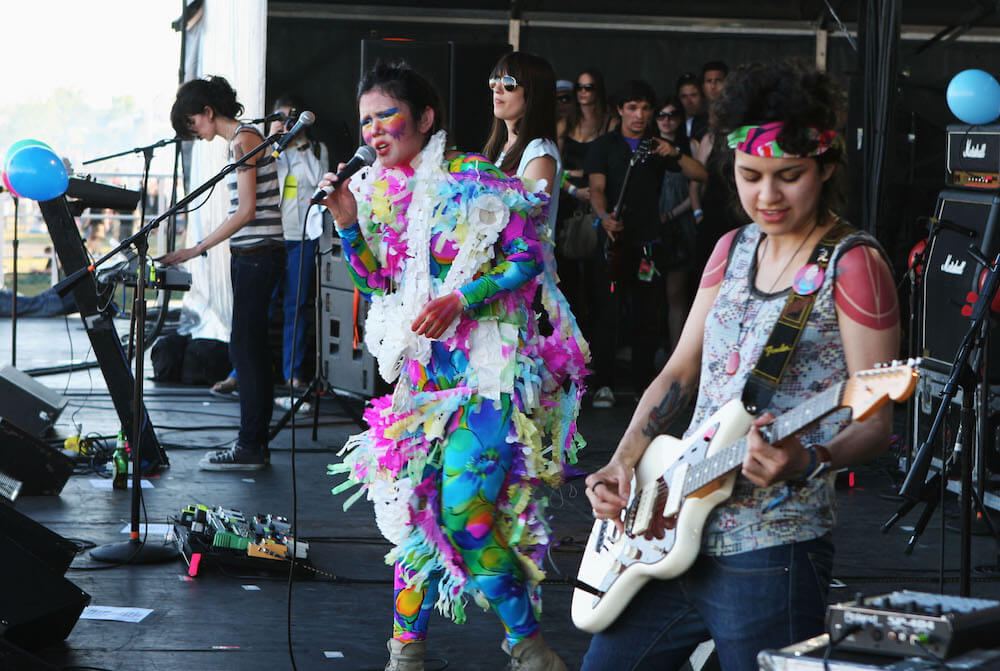 In addition to being camp themselves, CSS also loved the camp aspects of American culture. The superficial celebrity culture of the mid to late 2000s provided tons of fodder to play with. The band famously pulled their name, Cansei De Ser Sexy, from a Portuguese translation of the Beyoncé quote “I’m so tired of being sexy,” but it wasn’t a comment on sexuality or feminism. It was just supposed to be taken as face value: hilarious and sexy and fab because it was Beyoncé. The band’s song “Meeting Paris Hilton” is less about the heiress and more about meeting any celebrity who you think is That Bitch. “I ran into the bitch, the bitch was so hot,” Lovefoxxx drawls, a phrase that could apply to Kim Kardashian or even Wendy Williams depending on how hard you wanted to carry. Still, with think pieces extolling Hilton’s cultural impact continuing to pop into our news feeds, their choice to namecheck the star seems prophetic.

This love of mainstream and catchy choruses made CSS a black sheep amongst their indie rock peers. “Sometimes the serious indie bands don’t like us because we’re doing pop music and having fun,” Carol told the Guardian in 2008.

While it made other bands shake their fists, CSS’s love of pop culture mixed with their hipster aesthetics is now the norm. At the time those taste-making elements were post-electroclash distorted guitars and cheap Casio keyboards. Now people signify taste with minimal production and the hushed inflections of Indie Pop Voice. The signifiers may have changed, but the merger of the avant-garde and accessibility that CSS pioneered is now the norm both critically and sonically.

Pop is no longer a dirty word, with critics giving love and attention to artists like Beyoncé and Taylor Swift. With the rise in home recording, it’s now increasingly hard to sonically distinguish between a top-tier popstar’s latest single and a girl uploading a song to Bandcamp. The reach of the internet means that anyone could potentially blow up at any time, no iPod commercial needed. The band’s dismissal of the idea of being “cool” and their openness to selling out is no longer a rarity.

Beyond the camp appeal and embrace of pop culture, this was also a band with visibly queer members. Look past the fabulous heterosexual frontwoman and you’ll see several band members with clearly queer presentation onstage. Ana Rezende and Luiza Sá constantly wear flannel shirts, jeans, and sweaters, not to mention trucker hats. These were all lesbian staples before moving into straight hipsters’ closets.  The pair worked as the DJ duo Meuku (named after a t.A.t.U. song) and would try and top each other with the “gayest song ever.”

Adriano Cintra, the band’s lone male member, dressed like a long-lost trucker member of the Village People. He openly brought his boyfriend to interviews while other indie stars like Kele Okereke of Bloc Party were still in the closet. Plus, Adriano didn’t fit the stereotypical gay creative mold of being a stylist or makeup artist. He was a musician making original music . Cintra’s remix of Kylie Minogue’s “Wow” was the only reason my teen self-found out about the undisputed gay icon from Down Under.

This visibly queer band acted as a flagpole for me searching for queer idols in a pre-Gaga, pre-Glee musical landscape. Blog posts compared Lovefoxxx’s over the top sexuality to Peaches, leading me to the pleasure chest of her discography (“Fuck the Pain Away,” amirite?). The band played shows with the Gossip, whose anthem “Standing In The Way of Control” got us through the Bush years and kept me from crying while I went to college in homophobic Mississippi. On “City Grrrl,” a classic story of moving to the city to become your freakiest self, the group collaborated with SSION. These bands were all wildly free, gay as heck, making cool art while also doing silly shit like “painting their teeth black, doing a moonie, just throwing food on everybody.”  Teenage me was smitten, completely into the idea of leaving the south behind to join these wild pals exploring hipster haunts while sporting clashing outfits.

CSS’s wacky sense of hedonism only grew more relatable as I started going to queer bars and parties. Lines like “Kiss me I’m drunk/don’t worry it’s true” and “Going back home, all alone” are prime Instagram captions. Lovefoxxx’s rainbow leggings are my ideal Pride accessory. I still believe in the vision of this ragtag gang of Brazilians, even after Adriano left and accused his bandmates of not being able to play their instruments.

At their best, CSS described the kind of queer underground I want to be a part of: unpretentious, lewd, arty, provocative, and fun. As an increasingly more tame and heteronormative life for queer people becomes possible, it’s important for us to remember the vision that CSS championed.