Let’s not dance around it: 2017 was trash. America essentially caved in on itself, burst into flames, crumbled to ashes, then inexplicably started burning again. So, we did what we’ve always done: escaped through music.

As a queer woman living in Trump’s America, it admittedly felt pretty good to bury myself in the warm embrace of queer female musicians. There was so much hate and vitriol against the LGBTQ community this year, so let’s make a point to celebrate ourselves. With that being said, here are the bestand gayestmoments queer women in music gifted us this year.

Halsey and Lauren Jauregui Sing To One Another On “Strangers”​​​

Lesbian pop artist Hayley Kiyoko has been blessing us with girl-on-girl music videos for the last few years. Time and time again, she’s proved herself as an artist, (“Girls Like Girls” accrued 82 million views on YouTube) and this October, she debuted her “Feelings” music video on TRL. The video follows Kiyoko as she flirts with a new female fling. The pop singer also released a video for her song “Sleepover” in March, which featured a steamy queer daydream about making out with your best friendsomething all of us can relate to, unfortunately (well, sometimes fortunately).

Demi Lovato Comes Out as Bisexual

In her YouTube documentary Simply Complicated, Demi Lovato said she was open to dating both men and women. The documentary shows the pop star swiping through male and female profiles on the selective dating app Raya. Lovato’s sexuality has been long speculated about, with many even trying to out her or drag her out of the closet. Yes, public outing still happens today, and yes, it’s still wrong. I was thrilled to see Lovato speak on her sexuality on her own termsas she should be allowed.

Kehlani, the bisexual singer who broke out in R this year, graced our eardrums with “Honey,” a lovey-dovey ballad to another woman. The video is adorable and will give you all the right tingles. Plus, with lyrics like, “I like my women just like I like my honey; sweet,” how can you go wrong?

Pansexual singer and rising LGBTQ icon Miley Cyrus performed her new single “Younger Now” at the 2017 VMAs. The beautiful and poignant performance featured a colorful array of LGBTQ folks. Cyrus has long been a champion for queer people, having founded the Happy Hippie Foundation in 2014, a non-profit that aims to help youth homelessness in the LGBTQ community. Miley released her sixth studio album this year, titled Younger Now, which includes a song that many assume is about ex Stella Maxwell, “She’s Not Him.”

Lesbian musical duo Tegan and Sara released The Con X: Covers this October to commemorate the 10th anniversary of their studio album The Con. The 2007 album accrued sexist reviews from critics who only saw Tegan and Sara as a queer female sister act. A decade later, the sisters asked fellow LGBTQ artists and allies to participate in a sold out tour and cover album, with proceeds benefitting the Tegan and Sara Foundation, a non-profit for self-identified women and girls in the LGBTQ community.

English indie pop band the xx had quite the year following the release of their third studio album, I See You, in January. In the same month, Romy Madley Croft, a guitarist and vocalist for the group, announced her engagement to her girlfriend, artist Hannah Marshall. In September, the xx performed this awesome cover of Timberlake’s “My Love” on the BBC Live Lounge. The Live Lounge is famed for its fusion of artists performing unlikely covers, and this one just kicks ass.

In October, queer singer-songwriter Annie Clark, known professionally as St. Vincent, released her fifth studio album, Masseduction, her first album in three years. Clark has been called “the female Bowie,” partly due to her flamboyant dating record. In the past few years, she’s become notorious for dating, um, how do I say this? hot famous women, like Cara Delevingne and Kristen Stewart. But her new album is a force to be reckoned with, brandishing indie pop synths and infused with heart.

The Rise of Kim Petras

Trans pop star Kim Petras broke out on the pop scene this year with a few songs off her upcoming debut album. In October, Petras released some visuals for “I Don’t Want It At All,” a flirty video about materialism. In one scene, she literally kneels at an altar and prays to a shrine of Paris Hilton. It’s over the top, fun, and catchy. I’m sure this is only the beginning for Kim Petras, who’s been working with the disgraced superstar producer Dr. Luke (yuck) and is managed by Larry Rudolph, the same guy who manages Britney Spears and Fifth Harmony (yay!).

LGBTQ icon Lady Gaga performed at the Super Bowl halftime show and pulled out all the stuntsno, like she literally leapt off a building. Gaga has long been a loud and proud voice for the LGBTQ community, and it was heartwarming to see her wield that pride at the Super Bowl while performing “Born This Way.” In September, the singer-songwriter also released her documentary, Five Foot Two, on Netflix, which offers a deeply personal glance into the singer’s life, the making of her album Joanne, and the moments leading up to her historic Super Bowl performance.

The Internet’s Syd Cameos On “Insecure”

On the “Hella LA” episode of Insecure, Issa Rae mistakes a DJ at the Kiss-and-Grind party for a man, but it’s actually Syd from soul-hop group The Internet. You might know The Internet by their lezzie song “Girl,” whichqueerly and coincidentallywas featured in Gypsy, the steamy yet bizarre Netflix show in which Naomi Watts plays another psycho queer woman. Syd’s debut solo album, Fin, was a critical favorite in 2017.

Though these women don’t identify as LGBTQ themselves, they’re massive allies of the community, and that message was received loud and queer in their work this year.

In June, uber-pop star Selena Gomez released a music video for her new single “Bad Liar.” Gomez plays every character in the videoyes, she straight up Norbit-ed her videoand falls in lust with the woman her dad (also her) is philandering with. It’s super cute, and to be honest, I wish it were a full-length, gay high school movie, because who hasn’t lusted after a hot teacher?

Ariana Grande has been an enthusiastic LGBTQ ally since her rebirth as a popstar. In February, the vocalist released a sexy and humorous music video for “Everyday,” a single off her third studio album Dangerous Woman. The video features a biracial lesbian couple aggressively making out, topless, in a public Laundromat. It’s silly, sexy, and light-heartedexactly the type of relief we needed this year. 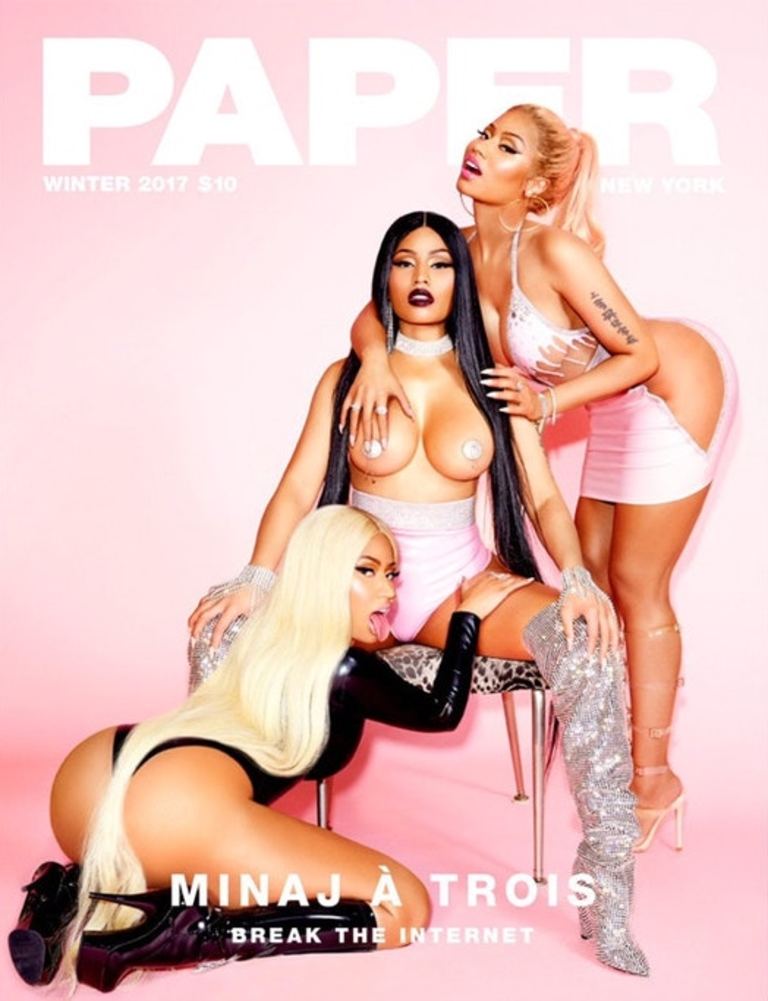 Look, I know that Nicki Minaj has been problematic in the past, and I know that this cover shoot was a blatant grab at using lesbianism to sell magazines. But I’m also a queer woman, and I didn’t not enjoy this. So can we maybe just let this one slide? Maybe? Can I live?