Part stand-up comedy, part indictment of toxic masculinity, part group therapy, Blackwell’s act freewheels through their lifelong journey to authenticity. “I never thought I’d be on a stage, by myself, telling people what I think,” Blackwell says, explaining that their past life as a bull dyke rendered them invisible to everyone except other lesbians. “I’m the spokesman for men tonight,” they proclaim.

And who better to speak for men than Blackwell, whose in-between gender identity and take-no-prisoners, observational sense of humor allows them to comment from both sides of the bathroom divide? Who else with a vagina has pissed themselves in elementary school while trying to use the urinal in the boys’ room? Who else will tell us about the gendered performances of flatulence in public? “I’m an able-bodied bathroom user,” they explain. “I go Number One and Number Two. I went Number Three once.” 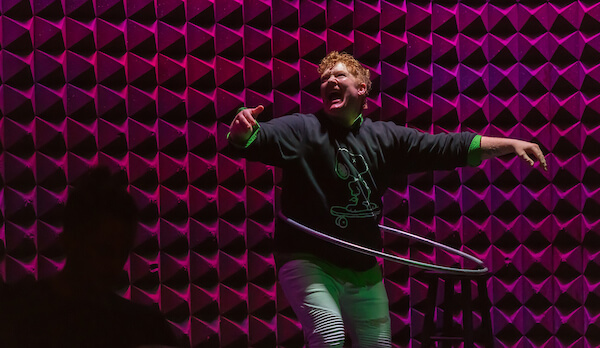 The stories they tell are heartbreaking at times and laugh-out-loud funny at others. More often, they’re both. Questions of bodily agency, anatomical ambiguity, and childhood sexuality are central to them all. They cover everything from Blackwell’s career in the circus, where they were prematurely seen as trans; their period of dating “very generous rich women;” and their conflicts with gender normativity while in pursuit of acting training.

Nowhere do the themes of the night come more to a head than in Blackwell’s retelling of a story involving their young niece, fictionally named “Schmerm”; a visitors’ restroom at a men’s prison; and a handful of coins. It must be heard to be believed. 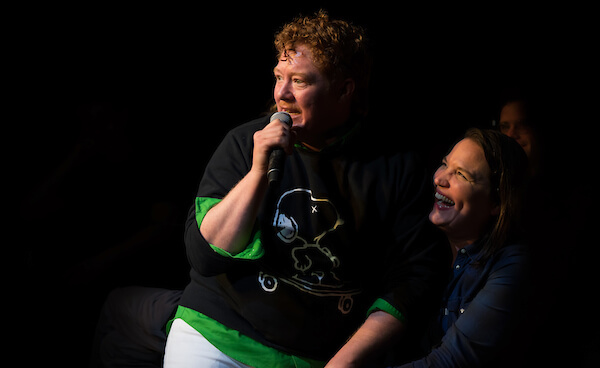 Blackwell’s act is borne of tremendous compassion, both for themself and the targets of their criticism. “We’re all complicit in creating baby-men,” they declare towards the end. By this point, we know that they were victimized many times in childhood by adult male sexual abusers. So, when Blackwell asks the baby-men in the audience to self-identify, then asks one if they can sit on his lap and gaze silently into his eyes for several minutes, in full view of the rest of the audience, we understand that they intend to give a roadmap for growth, healing, and reconciliation around gender-based violence of all kinds.

Don’t worry, though — the evening ends as Blackwell hula-hoops to Rufus and Chaka Khan’s “Tell Me Something Good.” After all, as Blackwell says, they’re “a half-glass-full girl.”

For more on Becca Blackwell, and for details on their other work and tour dates, check out beccablackwell.com.