What is a hurt body? This was one of the many questions swirling inside the mind of artist, dancer and academic Brendan Fernandes when it came to creating “On Flashing Lights,” an upcoming ‘sound and light installation’ set to be displayed at Toronto’s 2018 Nuit Blanche.

He was asking specifically because he had been recently assaulted; a random man approached him on the streets of New York and threw a punch. A few months later he was verbally assaulted, intimidated by a stranger who spat the words ‘terrorist faggot’ at him on the subway. On both occasions Fernandes had been hurt, albeit in different ways. The first, physical assault was followed up by a police officer, who asked him: “are you hurt?” Fernandes, who at the time had no health insurance, replied that he wasn’t – because he couldn’t afford an ambulance. The case was dropped.

“Both of these were moments of fear and destruction, and they’re happening to queer people across the world. That fact should really make us question where our civil rights currently are, because this is in New York of all places,” he recalls to INTO via Skype. Despite occasional interference the passion in his voice is clear: if this hatred still bubbles under the surface of even supposedly progressive cities, rural queer communities don’t stand a chance.

This train of thought led him to question safety, power and protection. These are all themes intermingled within ‘On Flashing Lights’, which is part-installation and part ‘political dance party.’ The premise is this: 25 police cars will line Toronto’s Bay Street, their red and blue lights blaring to the beat of a soundtrack curated by a series of queer DJs.  The overall effect will be one of a makeshift dance floor which attendees will be encouraged to occupy.

“I was thinking about the idea of the nightclub as a sanctuary, which it always was for me – although a lot of other queer people don’t see it that way. But for me personally it was a place that allowed me to move, act and really not care in a certain way; there’s a freedom there for me.”

But there’s a more somber undertone rooted in the tragedy of the Orlando massacre, which saw 49 club-goers – largely queer and trans people of color – murdered, and 58 more injured. On the 49th minute of every hour there will be a 60-second silence, interrupting the celebration and leaving pause for thought. When the music kicks back in it will always be a variation of ‘The Whispers’ ‘The Beat Goes On.’ “It’s a reference to Pulse, but it’s also about the idea of the heart and the body,” explains Fernandes. “It’s about the violence that continues to happen.”

He trialled this idea last year, staging an ‘Emergency Rave’ on a smaller scale. It’s an unusual idea, and one which queers the straightforward idea of an art exhibition: “people have so many questions,” he laughs. “Is it ticketed? How long will it last? What will we see?” Fernandes prefers to think outside of these terms, instead claiming that he works “at the intersection between visual arts and dance – I like to be a little bit cheeky and break with formal etiquette.” Unsurprisingly, this can cause problems when it comes to finding funding and working within traditional institutions: “That’s actually why ‘On Flashing Lights’ is billed as a sound and light installation. We have to call it that because it uses taxpayers’ money, so the idea is that we can’t just take it and throw a party!”

Despite the fluidity of these various descriptions, Fernandes stands by the idea that he creates ‘political dance parties.’ “It’s interesting, because museums and art spaces want to do it as their fundraiser. But it’s the work! You’re getting the work. Even to break down the idea of a political dance party; it’s challenging. But I like that challenge. I like to disrupt and create strange encounters, make people think in different ways. It’s like my identity. I’m Kenyan, Canadian and Indian, so my identity exists in different spaces which lead me to one thing: queer. To me, ‘queer’ is about self-identification; it’s a moniker which is open to inclusivity, but it’s constantly changing. It’s not just about a gendered, sexualized body: in this case, it’s about the space of the dance floor.”

This desire to question, disrupt and subvert bleeds into everything Fernandes says and does. He questions what it means to be a terrorist by specifically referencing Pulse: “They initially called it that but then found out he was American, right? So then they were like ‘oh, it’s not terrorism any more.’” He also unpicks the popular concept of a ‘safe space’, explaining that bodies can be ‘terrorized in a different way’ on the dance floor. “There are those moments of claustrophobia in the club where you might feel uncomfortable; it could be tied into that hallucinogenic high you might have, but there’s an element that your sense of security is being played with.” 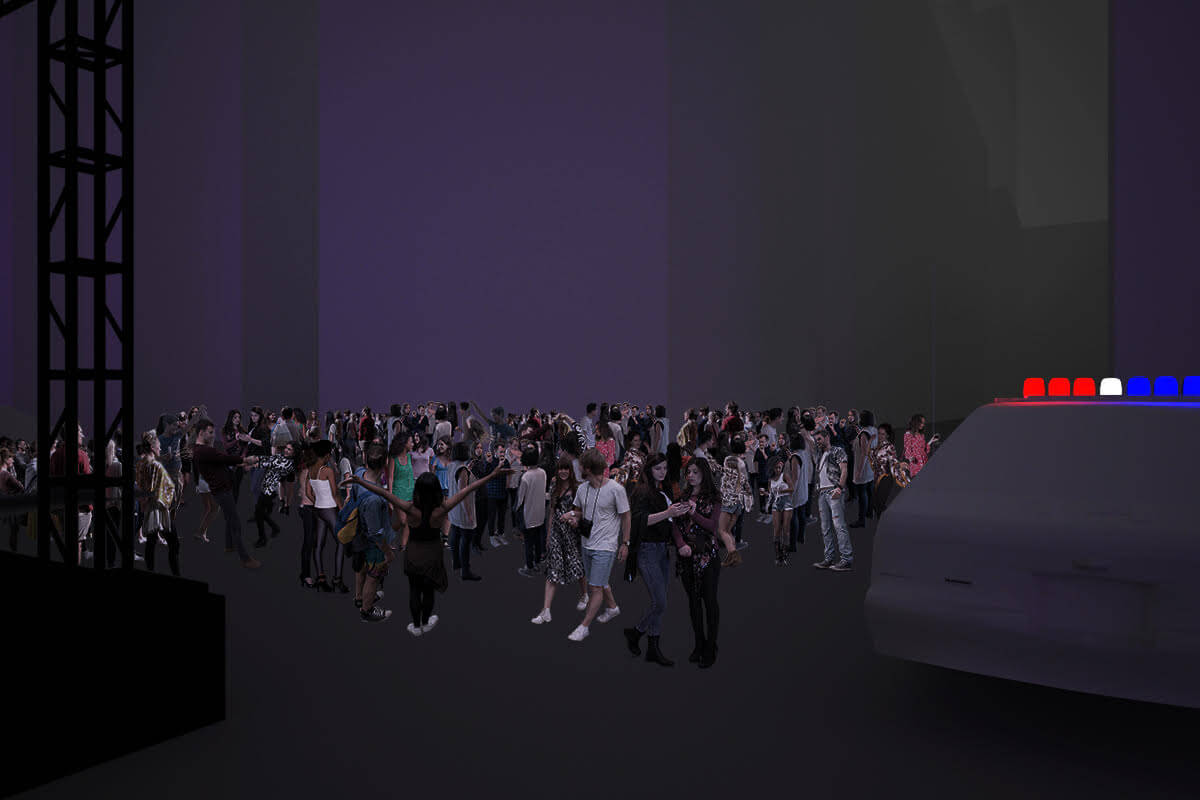 The fact that ‘On Flashing Lights’ will take place in Toronto is also relevant. Last year, the city’s LGBTQ activists made global headlines for making a stand against police participation at its annual Pride. “We do have those societal structures of protection like the police, who I don’t feel are looking after our disenfranchised communities. There was actually a serial killer targeting men of color in Toronto last year, but the police weren’t fully engaging. I don’t want to place blame, but it doesn’t feel like they were doing the work they were supposed to do.”

Information is crucial when it comes to tackling injustice. As a teenager Fernandes absorbed these political messages through riot grrrl and punk culture more generally, but at the time he was also a ballet dancer. (He later moved into contemporary dance before having his career halted by a hamstring injury.) In his mind, the two worlds – punk and ballet – are interlinked, because they both create unison amongst their fans. “Gatherings of people for me are really powerful, because it’s about social solidarity; about coming together in unison.”

By aiming to make visitors dance in unison against the lights of police cars, Fernandes is actively trying to facilitate solidarity. He’s investigating ideas around queer spaces, safety and solidarity, but he’s also tapping into the celebratory spirit of dance to make people feel genuinely good. “Of course I want people to gather and have a good time,” he says of his main hopes for the work. “The audience will be a diverse group of people, but I want them all to pause and think: why am I dancing in the streets of Toronto in the middle of the night with these police cars? I want people to restart, rethink and then form an opinion, or a dialogue.”

It’s all part of his wider mission to queer conventional ways of thinking, and open up new ways of thinking. “In my work, queer is just a way to think about things through non-binaries,” he summarizes. “It’s about moving forward, not about being marginalized or being a victim. To me, the idea of ‘queer’ is about creating new, future possibilities – or at least that’s how I want to use it.”