The most attention-grabbing look from this year’s Oscar ceremony wasn’t Gal Gadot’s flapper-inspired Givenchy gown or Lupita Nyong’o looking like a Wakanda warrior-goddess in Versace. It was a genderfluid fantasy strolling down the red carpet.

Samuel Brinton, a 29-year-old activist, wore an innovative garment designed to look like a tuxedo on the top and a gown on the bottom. Brinton paired the look with a pair of Jimmy Choo stilettos crowdfunded on GoFundMealong with bright red lipstick, a petite pink mohawk, and a neatly trimmed goatee. It was Game of Thrones by way of David Bowie.

Brinton, who uses gender-neutral pronouns, tells INTO the ensemble was intended to allow them to represent the vast complexity of their gender identity. 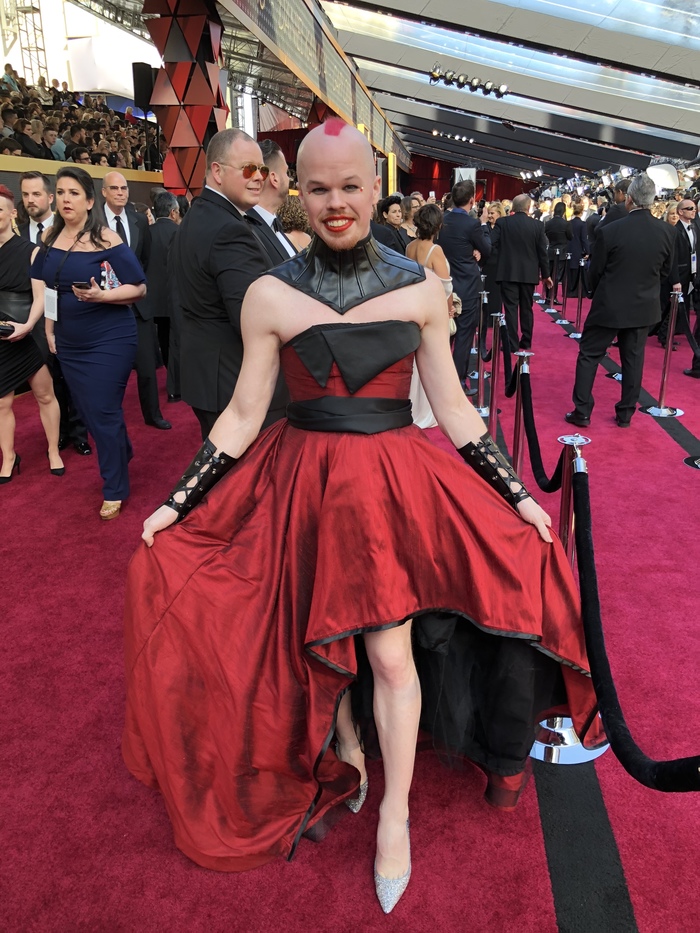 All the designers Brinton met with wanted to put them in a suit or a short skirt. But Brinton, who has identified as nonbinary since starting a gender-fluidity group as a graduate student at MIT, was looking for something a little more “inclusive.”

Romy McCloskey, a costume designer based in Houston, worked with Brinton to create a custom garment which would allow them to express the beauty of living outside the binary. The top of the ensemble has a “double-notch lapel, which is a tux lapel turned on its side,” Brinton explains over the phone. Meanwhile, the bodice was outfitted with a black cummerbund.

The novelty of Brinton’s groundbreaking look instantly made waves on Sunday night.

Celebrities attending the 90th Academy Awards at Los Angeles’ Dolby Theater came up to Brinton on the red carpet to take photos. Throughout the evening, their Twitter feed was flooded with pictures with actors like Jane Fonda, Gina Rodriguez, and Black Panther’s Chadwick Bosemanas well as Olympian Adam Rippon, who took a selfie with Brinton in his leather harness. 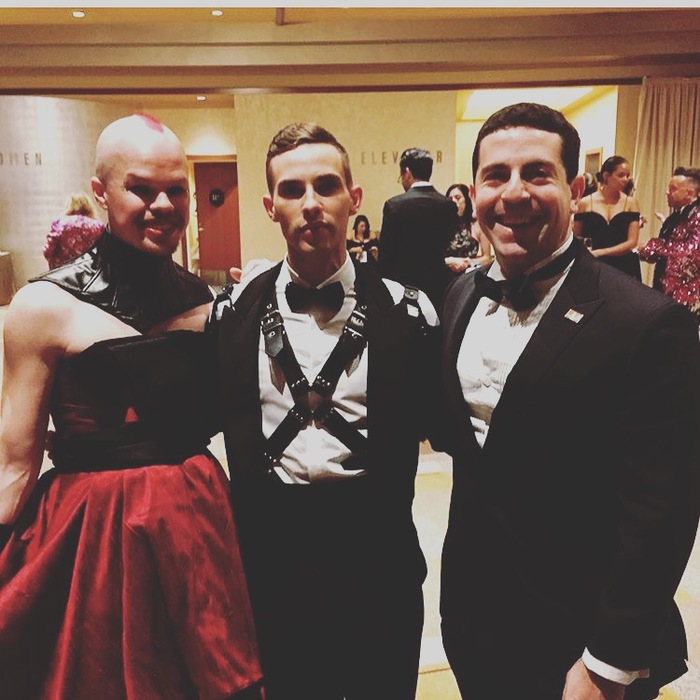 Keala Settle, the Greatest Showman star who performed “This Is Me” during the ceremony, even pushed her agent out of the way to come over and give Brinton a hug. 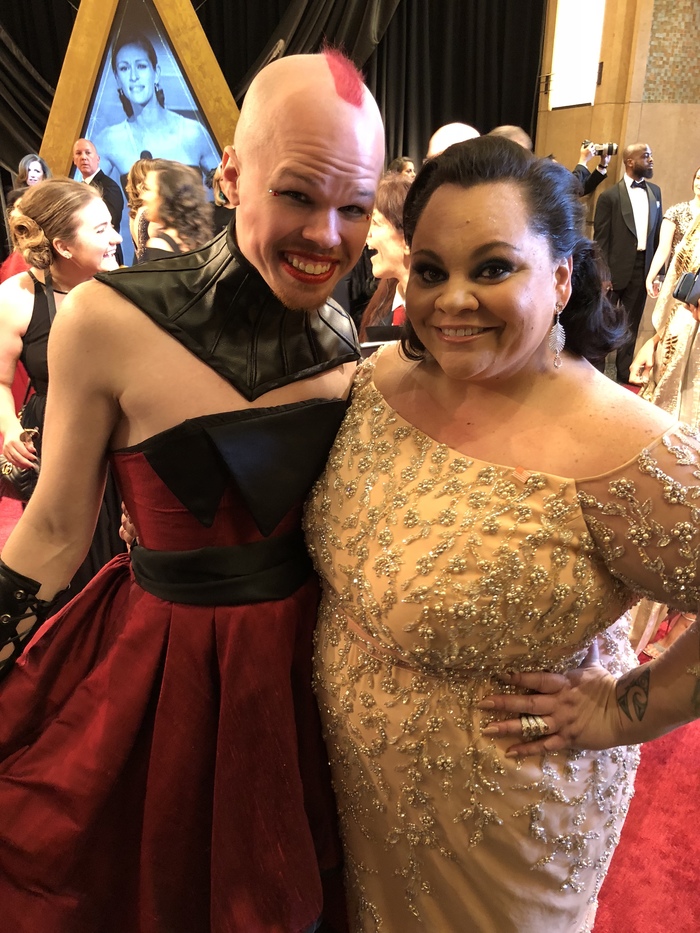 “I was being celebrated for me,” says Brinton, who was attending on behalf of their employer, The Trevor Project. “I didn’t make a movie. I wasn’t a nominee. I was just being me. That was apparently something that a lot of people were really excited to see.”

What makes this recognition so important, Brinton says, is that it starts discussions. Although there have been nonbinary people on the red carpet before, few had the vocabulary to express it. By wearing a garment that boldly showcases Brinton’s nonbinary identity, it allows them to educate others on what it means to identify along a spectrum of gender.

The most pivotal conversation of the evening, however, took place in the women’s bathroom at the Dolby Theater.

Restrooms are a distressing and even dangerous space for trans and nonbinary people. Although discriminatory bills like North Carolina’s House Bill 2 send the false message transgender folks are predators waiting to prey on women and children, it’s trans individuals who find themselves targeted when accessing these facilities. More than 70 percent of transgender people report being harassed, threatened, or attacked in a restroom at some point in their lives.

Since first coming out as genderfluid six years ago, Brinton has scarcely gotten the opportunity to feel comfortable in a public bathroom. Sometimes other people in the restroom point at them or stare. Another time a boy ran toward Brinton as if he intended to throw a punch but started laughing instead.

“When I was at a federal agency in Washington D.C., I was quickly asked by a woman to leave,” Brinton says. “She did not feel safe with me there.”

“I’m constantly having to choose a gendered bathroom and just hope and pray that it’s going to be a good situation,” they continue. “This is why we’re fighting on so many fronts with Title IX and other issues. I shouldn’t be concentrating on where I use the bathroom. I should be concentrating on having a good night at the Oscars or a good day at work.” 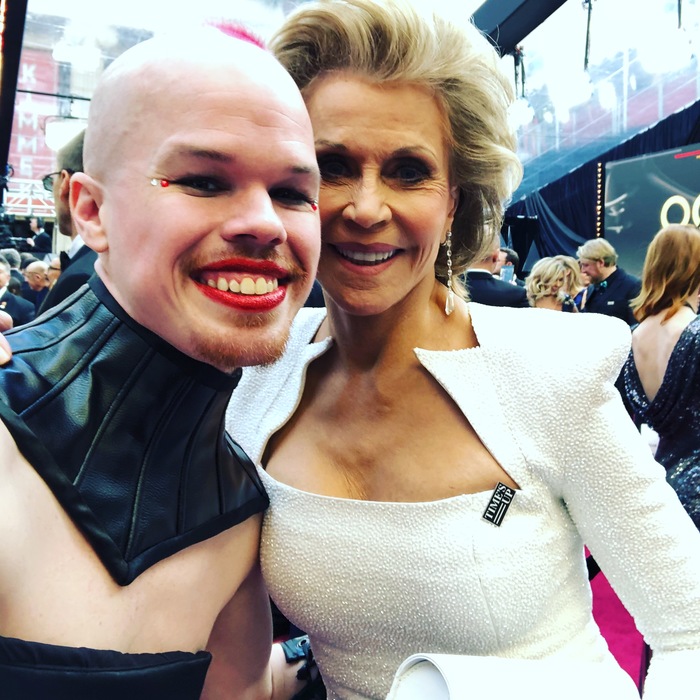 But the Academy Awards were an all-too-rare moment in Brinton’s life where their gender difference wasn’t perceived as a threat to others in the bathroom. It was championed.

When Brinton walked into the women’s restroom, they were met with an appreciative smile from Meryl Streep and Nicole Kidman, who “gushed” over the look. Soon a circle of celebrities formed around them, wanting to know who designed the outfit. Others thought Brinton must be famous and shouted, “I saw you on TV!”

Brinton says the embrace made them feel like they “deserved” to be in the women’s restroom.

“This was a moment where all these beautiful people are aren’t mocking me,” they claim. “Sometimes when I go into a bathroom, I’m so nervous of the looks, the jeers, and the pointing. This was the opposite of that. I got to be just like one of them. They had a designer dress. I had a designer dress, too.”

On an evening where the Oscars awarded queer-themed films like The Shape of Water and A Fantastic Woman, the inclusion feels to Brinton like a sign things are changingboth in the industry and society at large.

The Shape of Water, the evening’s Best Picture winner, is a powerful exploration of friendship between marginalized peoples. A gay artist and a black cleaning woman team up to help their mute best friend find love; the object of her affections just happens to be a fishman kidnapped by the U.S. government. A Fantastic Woman, which took home the Oscar for Best Foreign Film, is about a transgender woman grieving the death of her lover.

Daniela Vega, star of the Chilean independent drama, appeared onstage twice during the ceremony. When she came out the second time to introduce musical act Sufjan Stevenswho sang the Oscar-nominated “Mystery of Love” from Call Me By Your NameVega became the first trans person to present at the Academy Awards.

When INTO asked Brinton how it felt to be a part of this watershed event, they became more than a little emotional.

“I’m seeing our stories being told and us telling the stories,” Brinton says. “That is really beautiful. If one person sees me on the red carpet and realizes that this is an important moment, then I’ll be happy.”