In one of the most haunting scenes from “She Flies by Her Own Wings,” Shannon Scott walks alone through a graveyard. As she explains in voiceover, the site is home to the Congressional Cemetery in Washington, D.C., where she visits the burial places of gay soldiers who have been laid to rest. One headstone, outfitted with two pink triangles pointing different directions, proclaims: “A proud, gay Vietnam veteran.”

Another epitaph, however, reads as a warning to the current administration. “When I was in the military, they gave me a medal for killing two men and discharged me for loving one,” it says.

This is a situation Scott knows all too well.

In 2011, the veteran was discharged from the U.S. Air Force Air National Guard after she started transitioning in secret. But Scott tells INTO the changes were “obvious” to those around her. She would come into work with bright red patches on her cheeks from laser hair removal and began to grow her hair out, which was against regulation.

Meanwhile, the tone and pitch of her voice became more feminine through daily training exercises.

As Scott slowly transformed into the woman she always had been, the other troops in Scott’s unit acted out against her. When she crossed her legs, some of them would grab her foot and force it off her opposite thighcorrecting what they saw as aberrant behavior.

After whispers spread among her colleagues, Scott was called into her supervisor’s office. She immediately noticed two pieces of paper on the desk. One was the section of the U.S. Code of Military Justice banning transgender people from serving openly in the military. The policy, which would be lifted in 2016 by the Obama administration, compared trans people to “pedophiles.”

The other was an honorable discharge with Scott’s name on it. 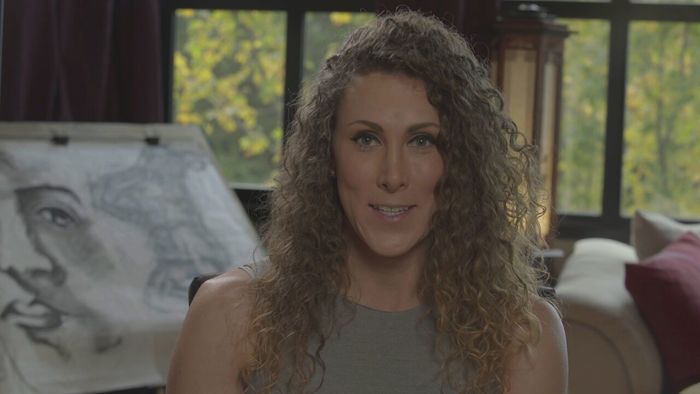 “I was more in shock than anything,” she says in an hour-long phone conversation. “He said, ‘You have two options here. You can keep it quiet, keep it off base, and you can stayor you’re gone, basically.’”

Scott’s story is one of three profiled in Authentically Us, a documentary project from filmmaker Jesse Ayala focused around three themes. Ayala, who is openly gay, tells INTO that he wanted to show that transgender people can “work anywhere,” “live anywhere,” and that “they’ve always been here.”

These stories were chosen out of 200 interviews conducted throughout the American Northwest.

“What we wanted to focus on in each of these stories was that they’re not stories of pain,” Ayala says over the phone. “While there’s a lot of pain in a lot of these people’s lives, they were stories of strong characters and strong people who are making the world better for those around them in a variety of ways.”

Authentically Us approaches these narratives in a revolutionary way. The series of short films were shot through Oculus VRa technology which captures scenes unfolding in 360-degrees and every direction.

The impact is almost overwhelmingly immersive. When Scott sits in a lobby meeting with Sen. Ron Wyden (D-Ore.), viewers have the opportunity to pan the room as legislators listen to her speak on President Trump’s policy banning trans military service. In July 2017, the Commander-in-Chief tweeted that transgender people would not be allowed to serve “in any capacity.”

Thinking back to her own discharge, she tells Wyden, “The 15,000 troops that are out there right now, their hearts are breaking just as mine was.”

“The day that I left that base and resigned from the military was a heartbreaking day for me,” Scott claims. “As I cried, drove off the base, and looked back at something I would never get to do again, I remember thinking: This is so wrong. I love this country so much and I love what I do here.”

What’s unique about strapping on a headset instead of watching Scott speak from the comfort of one’s couch is that the filmmakers behind Authentically Us didn’t have the ability to edit what goes in the frame. When Scott addresses a Department of Veterans Affairs event in October 2017, the omniscient camera takes in everything from the assortment of flags behind her on stage to the drinks resting on attendees’ tables.

Ayala believes it’s these detailswhether it’s the shoes Scott is wearing or the drapes hanging in her windowthat further humanize her story to viewers. He says the “small things start to add up.” 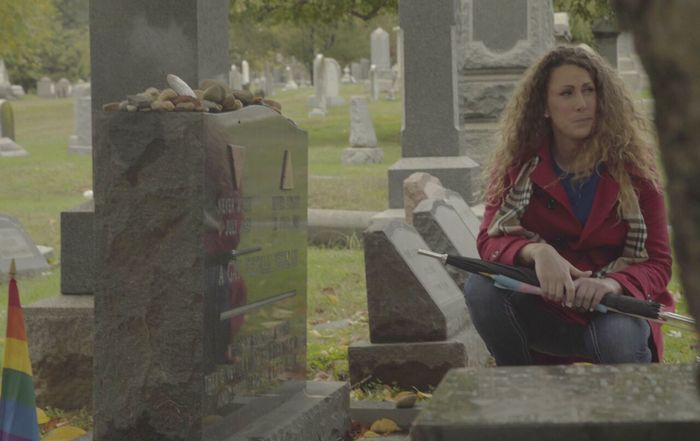 “The ultimate goal was to create understanding and empathy,” Ayala continues. “We chose virtual reality because there was a certain level of intimacy that you have with the character when in a headset. You agreed to be in this space with this person, and you see their stories.”

“She Flies by Her Own Wings”is a nine-minute segment of the three-part series andpremiered at the Tribeca Film Festival on April 21ahead of a screening at the Cannes Film Festival later this month.

The creative team behind the first-of-its-kind projectsays that most of the people attending the prestigious film festwhich is held in New Yorkhad never seen anything like the film before. In addition to the novelty of the Oculus VR technology, many viewers would be engaging with a transgender person for the first time.

When Ayala asked Acton during an interview what he would say to someone who has never met a trans individual before, he said, “They have, they just don’t know it.”

“That stuck with me,” the director claims. “Transgender people are everywhere, and we interact with them every day, but many people don’t register that. They aren’t scary. They are not the enemy. They are living in communities with us and enriching all of our livesif only we were open to seeing that.”

Nearly a year after the president tweeted his military banwhich would be blocked in a series of federal court rulingsScott believes the film has the power to open people’s eyes to the discrimination trans people face.

“When they take those goggles off, they start seeing people differently,” she says.

Prior to her formal discharge from the Air Force, Scott was lucky enough to secure a job with the Federal Aviation Administration in Portland, Oreg. As she traversed the country in a U-Haul, Scott recalls driving through the gorge of the Columbia River as the rain bathed the Oregon wilderness. She says the downpour felt “like a cleansingas if my entire life was being washed off me and I was being reborn.”

Scott decided she would devote her life to ensuring that other trans service members didn’t have to experience the pain and suffering she did.

“I started crying,” she says. “It was nearly 30 years of pent-up emotion, anger, fear, and frustration. I was just washed clean. I had to pull the U-Haul to the side of the road. I sat there and I sobbed for I don’t know how long. I pulled the U-Haul back onto the highway, and I stepped into the next part of my life.”

Authentically Uswill be available in the Oculus VR store this November, where viewers will also have the option to screen a 360-degree video cut.