This season of American Idol has been visibly different from years past. For the first time in the show’s 16 seasons, the top players have included people of color, a Venezuelan immigrant, and out queer contestants.

Much of the focus has often fallen on Idol’s first drag queen to make it to the Top 14: Ada Vox. But something monumental has been unraveling in the ABC reboot that hasn’t been given the attention it deserves, and that’s the Top 7’s Jurnee, an out and proud queer woman of color.

American Idol hasn’t had the best history with LGBTQ contestantsand that’s a euphemism. This is the first season to have out queer contenders, which by itself is insulting, but when we glance back at the ghosts of Idol’s queer past, they’re predominantly male and white.

Indisputably, the most popular gay Idol veterans are Adam Lambert, who finished as runner-up in 2009, and Clay Aiken, who earned the same title in 2003. However, both men weren’t out during their time as contestants on the reality singing competition. Aiken came out five years later in a People cover. Lambert wasn’t as lucky, and was actually outed during when a series of photos of the singer kissing another man surfaced. The scandal drew scathing commentary from talk show hosts like Bill O’Reilly, who called the photos “embarrassing.” Soon after the finale, Lambert covered Rolling Stone with his official coming out story.

Other male competitors have come out after their time on the show, such as Season 1’s Jim Verraros, or have been outed like Lambert, like Season 7 contestant David Hernandez.

Queer women haven’t received the same malicious treatment on the long-running competition, but instead, have been nearly invisible. Frenchie Davis, who shared a season with Clay Aiken, was disqualified when topless photos of the singer leaked. Davis came out as bisexual in 2012, but wasn’t out while on the show. That same season, Vanessa Olivarez reportedly came out to her fellow contestants, but not publicly. And in 2010, Crystal Bowersox of Ohio finished as the runner-up in Season 9, coming out as bisexual three years later.

M.K. Nobilette, who finished 10th in Season 13, was the groundbreaking first Idol contender to compete as openly gay. The artist came out as “obviously” gay in an early episode of the show, as well as revealing that she was raised by two moms.

Since then, an out queer woman has never made it to the Top 10until now.

Enter the mononymous Jurnee from Denver, Colo. who has been out since the day she walked into her Idol audition. The 18-year old singer opened up about coming out in her pre-interview, divulging that she is married to a woman in the army. This past Sunday, she gave a knockout performance of “How Far I’ll Go” from Moana, and host Ryan Seacrest revealed afterward that Jurnee’s wife had just deployed this week. The talented singer has been open about her relationship, coming out, being bullied in her youth, and her journeysorryto realizing she was a lesbian. 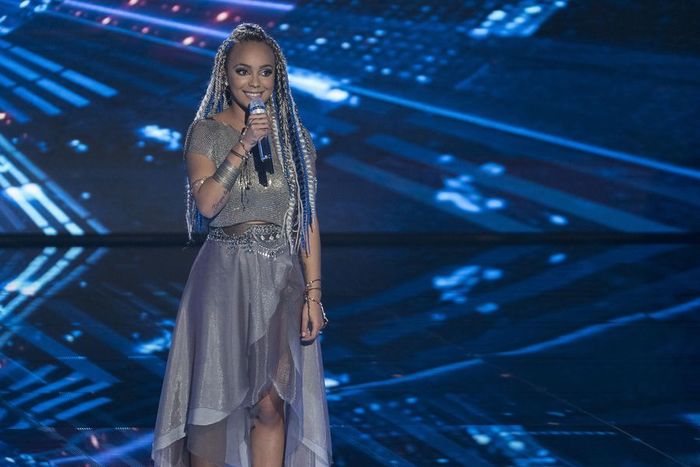 As a long-time fan of the show and a lesbian woman, it feels surprising and out of place to hear Jurnee use such overt language about her sexuality on Idol. It’s so important and necessary for LGBTQ people to audibly see themselves on-screen, treated fairly and welcomed warmly, and to hear such terminology normalized on a major platform. I’ve been watching the singing competition for more than a decade of my life, and had I seen female queerness normalized on a reality show as culturally significant as Idol, maybe I would’ve identified with a “lesbian” label sooner, without feeling embarrassed or ashamed. Watching Jurnee slay song after song, while speaking openly about her sexuality is inspiring and mollifying.

Unfortunately, but somewhat unsurprisingly, America doesn’t feel the same. As we learned in the gutting 2016 election, this hell-country cannot be left to its own devices. If flyover states can’t be trusted with aptly choosing a president, we definitely can’t trust them with the next greatest pop star, and that was proven last week, when the country was given its first opportunity to vote for their faves, rather than the judges. And with that, two black men, a Venezuelan woman, drag queen Ada Vox, and Jurnee, were voted off. Fortunately, the judges saved all but one of the nearly-offed contestants, including Ada and Jurnee.

“Never have I ever seen a more qualified woman for the job and still not get the job,” Perry quipped to the audience, moments before saving the Denver native. “What’s the disconnect, America?” The answer goes without saying, but, umracism and homophobia, mostly!

Unfortunately, Ada was voted off in finality Sunday night, which drew a collectiveoutragefrom queer peopleand I get it: Ada’s significance as a contestant in the Top 10 is not lost on me. She’s the second drag queen ever to go this far in the competition, next to Danny Noriega from Season 7’s Top 16. But all the hubbub around Ada’s elimination totally erases the importance of Jurnee as an out queer woman of color in the Top 7which hasnever happened before.

Ada’s brazen queerness surely has an indelible effect on the show and its future, but what about Jurnee? There’s barely been any coverage in queer media on Jurnee’sIdoljaunt, while LGBTQ people have been quick to rally behind this season’s drag queen.The powerhouse vocalist will surely be missed, but my support is 100 percent, full throttle behind Jurnee, who is literally smashing down the show’s history of homophobia and racism right in front of our eyesand that demands to be recognized. And any insinuation that Ada’s involvement on the show was somehow more important or significant than Jurnee’s is downright outrageous. 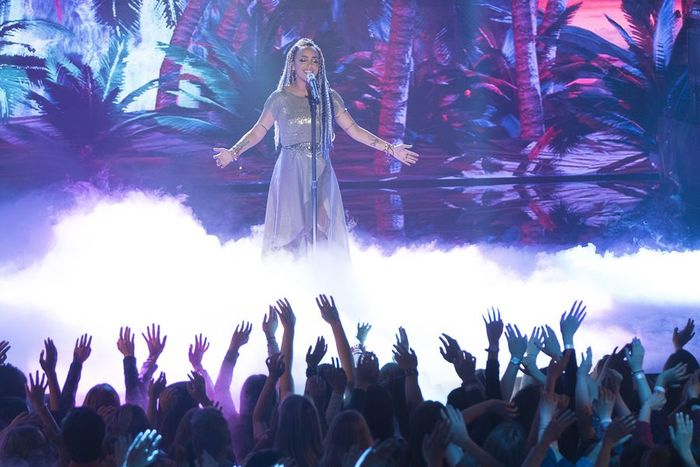 Regardless of how far the 18-year old goes in the competition, she’s made her mark on the judges and on fans of the show, and I believe she’ll have a standout career no matter what. She’s got the vocals, the looks, and the edge to compete with the best of ‘em.

Pop music lacks out lesbian performers, and while many female artists have come out as bi+, like Janelle Monae, Demi Lovato, and Miley Cyrus, it’d be nice to for a QWOC to join the lonely ranks of lesbian popstardom with Lesbian Jesus Hayley Kiyoko. Jurnee’s presence on American Idol is significant, but her talent speaks for itself.