In Darrel Alejandro Holnes’ Bird of Pray, marine Shaquille’s (Cornelius Davidson) attempt at suicide is disrupted when Jem (DeVante Lewis) — the ghost of a fellow marine killed for being gay — suddenly appears and makes a proposition: Shaquille must share his body with Jem’s soul instead of sacrificing it to the vultures in exchange for absolution. With an impending hurricane forcing his hand, Shaquille must quickly choose between saving a fellow soldier he failed to save at war or escaping his worldly problems by starting over in the afterlife.

Bird of Pray is the first chapter of Holnes’ Sandstorm Cycle, a series of plays based on Holnes’ interviews with African American veterans of recent US wars in the Middle East and elsewhere abroad. An average of 20 veterans a day commit suicide, and in 2016, more soldiers died by suicide than by the hands of ISIS. Developed in residence at The Collective NY with the support of the Arch & Bruce Brown Foundation and various private donors, the death rituals in Bird of Pray are additionally informed by the Tibetan sky burial practice and Zoroastrian Towers of Silence.

INTO spoke with Darrel Holnes about the inspiration for Bird of Pray and how queerness, blackness, and PTSD can be intertwined. 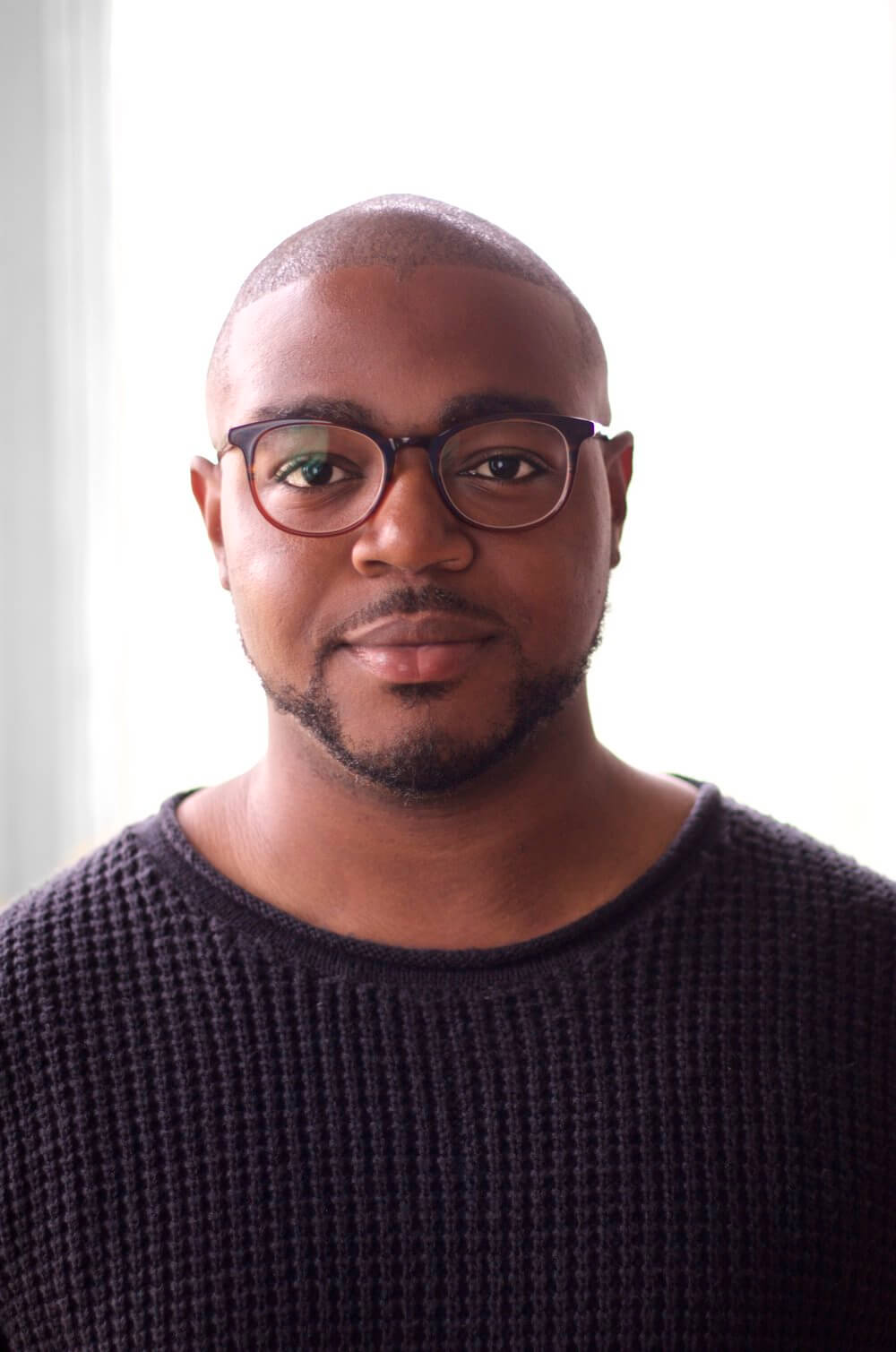 What inspired you to write about military service personnel?

My relationship with the US military started as a kid. I have several family members that are in the military, and I went to the Department of Defense school in the Panama Canal Zone. And my family has worked for the military and the government as well. And so I was just brought up in this community that really had strong values, and those values included honor, and discipline, and truth, and trust. And, you know, those are kind of ingrained in me as a part of how I was brought up, and so, even though I made the decision not to join the military when I was of age, I think I just always maintained a respect for those who do choose to serve.

Can you speak to what your research has involved around the PTSD elements of the play?

Since 2013, I’ve been interviewing veterans about their experiences at war, the majority of whom have had experience in Afghanistan and/or Iraq. I found that a lot of those stories included their struggles with PTSD. And so my mission, at first, was to better understand the war that was happening out there, to bring it closer to home. One phrase that I thought about is “the theater of war,” because “the theater of war” is what I was hoping to bring to the stage, but I found that a lot of the soldiers that I was interviewing were already experiencing that kind of theater in their minds with their struggles with PTSD. So, then, my mission became to bring to life that struggle: What does it mean to enter a home of peace when you still have a war inside?

As far as the culture of service organizations like the Marines or the Army, have you noticed anything in your research around shame having to do with PTSD?

Well, I’ll say this. I’m speaking to soldiers who are interested in sharing their stories. And so these are a kind of self-selected population that are more willing to share than others. And because of that, many of them have gotten the help that they’ve needed through mental health support from the V.A., and often from their friends and family who have become more and more aware of how PTSD can be a part of a soldier’s journey home. But I do think that there still is a stigma around getting help, because there’s a stigma around disclosure.

A lot of these soldiers themselves to me have expressed their own reservations about some of the wars that have been fought in recent years, on behalf of the U.S., in the Middle East. So I’m not going to say that these wars were perfect. I don’t think there is such a thing as a perfect war. Or such a thing as a good war, either. I think war is always devastating. And to call something like that good, I think, is very problematic.

But I do think that, because there’s such a negative attitude towards these wars, and then so many questions about these soldiers, and a lot of misinformation, that just adds to them not getting help, because if they do have the courage to seek out support and treatment for their mental health issues, then sometimes they have to, then, battle those other stigmas as well.

I would imagine that blackness and queerness often compound that.

I would definitely say that queerness does compound that. And I feel comfortable saying that, because there are so many statistics that I can send to you that illustrate how suicide, in particular, is a trend, and, in some regions, a rising trend, in this country within LGBT communities. And suicide, in 2014, was the leading cause of death of veterans that had seen combat, which is an alarming statistic, because it surpassed, in that year, deaths by combat. Deaths by suicide actually exceeded deaths by combat.

[With regard to] LGBT soldiers who have been to combat, what are their suicide rates like? Based on this ther information, the theory is that they’re probably also alarmingly high because they sit at this cross-section.

When it comes to race, I do think the U.S. military has come a long way. But some problems still persist. What these narratives have taught me is that it’s because these problems with race continue in American society. So these folks, that are recruited from all over the country, sometimes bring their prejudices from those communities — that might be prevalent in those communities — into the ranks.

What I’m really encouraged by is the commitment by some of the servicemen that I’ve interviewed to improve the military, sometimes despite itself. They, like my students, continue to give me hope, because I do think change starts from within, and sometimes it starts from the bottom. So that does give me faith that the military itself will become a healthier space.

Dance therapy has been shown to be particularly helpful for people struggling with trauma. I’m curious to know if that informed your decision to make movement part of the fabric of these pieces.

Your question makes me wonder if these art products, which are these plays, are a way for me to use art to kind of heal, and not only heal my own self but also, to try to help these soldiers in a way that I’m not really able to do because I’m not a mental health professional. I can’t help the soldiers like a therapist can. The least I can do is tell their stories. what they have to say, take them seriously, and see their humanity, you know, before anything else. Before all the politics. 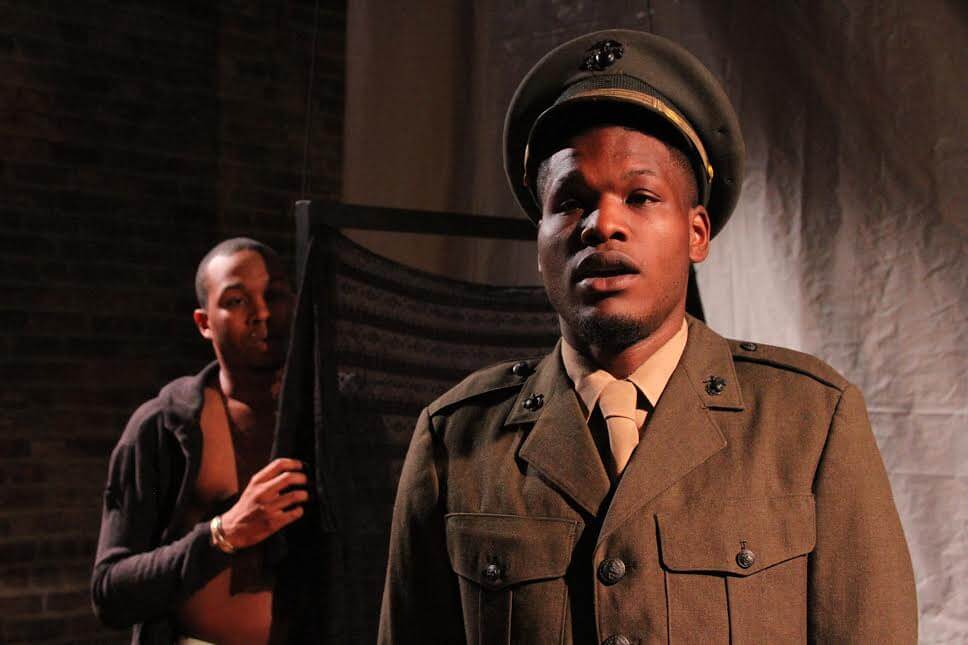 Could you speak to what traditions you drew on to create the mythos of the play?

There is a ring shout, and later, a rain dance, which comes from the African-American tradition of folk dance and also from the African Diaspora, overall, because their presence in African-American folk tradition is rooted in a West African tradition, as you can imagine. It’s something that, when they’re performed as a part of the piece, puts the piece in conversation with that tradition of movement from throughout the Diaspora.

I’m really interested in using movement that’s tied to a kind of spiritual ceremony because of how spirituality is in question and such an essential part of the story that’s being told here in the play. The characters contemplate the afterlife. The characters are searching for what comes beyond. They’re trying to move towards the beyond, and dance is an important part of that journey in the play as it is an important part of our journey towards that in life.

Can you talk to me about the cultural context behind the death rituals in the play?

I think that African-Americans, in particular, have a very long tradition of caring for their own dead because of, number one, how expensive funeral services tend to be in this community that is historically economically disadvantaged, and also because, during the Civil Rights Era, when there was so much death as a result of racist violence, how — in solidarity with the racism that ended the lives of these different black people — white funeral homes and white funeral homeowners would typically not want to deal with those bodies. And so it was up to the black funeral home owners to respond and to actually take care of the dead. And that, coupled with how religion worked at that time — how the black church was central to the social justice movement during the Civil Rights Era — really strengthened death rituals as a part of the African-American folk traditions in the more modern sense.

So not going all the way back to slavery, but even just thinking 60 years ago. I mean, I thought about all of that when I was writing this play. I thought about the history of death rituals within black communities in the United States, in the South especially, and even beyond, because I’m a Diaspora person, so, you know, it’s always on my mind.

What about Shaquille’s desire to be fed to the vultures?

[It’s] based on, actually, several different death rituals that are from throughout the world. And I was excited by how common they were in different cultures. Coming from this continent, with Native Americans; over to the continent of Australia, with Aboriginal culture; and as always, I’m looking at West Africa as well. And there are several communities and tribes and cultures that do have a tradition of feeding the bodies of the dead to the vultures. And that was fascinating to me because, you know, to my modern brain in 2018, it sounds so macabre, and sounds so gruesome, and, in a way, feels cruel, but the cultures that practice this tradition saw it as a way of literally returning to the person’s body to the earth. And so it was reverent, and it was beautiful, and it was honorable.

And I started to think about the ways that so many soldiers that I interviewed would sometimes talk about death on the battlefield that way. Some of the soldiers that I interviewed did also spend a lot of time contemplating their own mortality and were able to — arguably, anyway — make peace with their own mortality, because seeing so much death forces you to reconcile that.

My characters take a very millennial, American position, which is to say, “I don’t know, I don’t have, let me go seek out and find and grow.” Similar to the characters, I also went out and I found it. I called a friend of mine in Indonesia, that specializes in cultural rituals in her community, to talk to her about that. I traveled to Southeast Asia to learn more. I did Google research online with West African burial rituals and dance traditions, specifically the ones that might be related to Yoruba culture, because it significantly influenced black culture in Latin America, where I’m from. And I looked at African-American folk dance and burial rituals throughout the ages. But the play really represents a melange of those things in a way that globalism really allows us to imagine new traditions by referencing ancient ones. And so, really, what I’m hoping to represent in the play, is a new kind of American tradition that helps these soldiers’ stories be told.

Bird of Pray has its last festival performance at The Brick Theater, at 579 Metropolitan Ave in Brooklyn, on Wednesday, June 27 at 7pm. Tickets are available here or at the door for $20.