I can’t say I often agree with Azealia Banks. I was horrified when she endorsed Trump in 2016. Disgusted when she body-shamed CupcakKe earlier this year. Really fucking angry at the homophobia and racism she hurled towards Zayn Malik. She sacrificed a chicken on her Instagram. She’s working with Dr. Luke on her latest album (which annoyingly, will be really really good).

But during a series of tweets, fueled by an ongoing discussion of RuPaul plagiarizing her original music, Azealia made a particular argument about Drag Race — and subsequently how drag has come to be understood by the mainstream — that I found difficult to disagree with:

“If a woman wants to be a professional drag queen she absolutely can. She doesn’t have to have a dick to be a drag queen”

“Y’all sit up here and beg for respect and inclusivity then turn around and tell others they can’t be included. You want your feminity [sic] to be respected but won’t allow an actual woman to participate in any gay male affairs. Makes no sense”

What Azealia might not fully realize is that a number of women have already competed in the competition. Sonique, from Season 2, was the first openly transgender contestant. Monica Beverly Hillz, Season 5, became the first transgender woman to reveal her identity throughout the competition, followed by Peppermint in Season 9. Other contestants — Carmen Carrera, Kenya Michaels, Stacy Layne Matthews, Jiggly Caliente, and Gia Gunn  — have also openly spoken about their transition after competing on the show.

While the show’s application process doesn’t actively discriminate against gender and sexuality (thank you, Reddit, for the casting questions), Azealia’s tweets came hot off the heels of comments Ru made earlier in the year about the inclusion (read exclusion) of trans women: “You can take performance enhancing drugs and still be an athlete, just not in the Olympics.” Though Ru has since backtracked on this (honestly quite vile) comparison and apologized to the trans community, there are many still who share his sentiments.

This then begs the question: Who’s allowed to perform drag, and who are the gatekeepers? 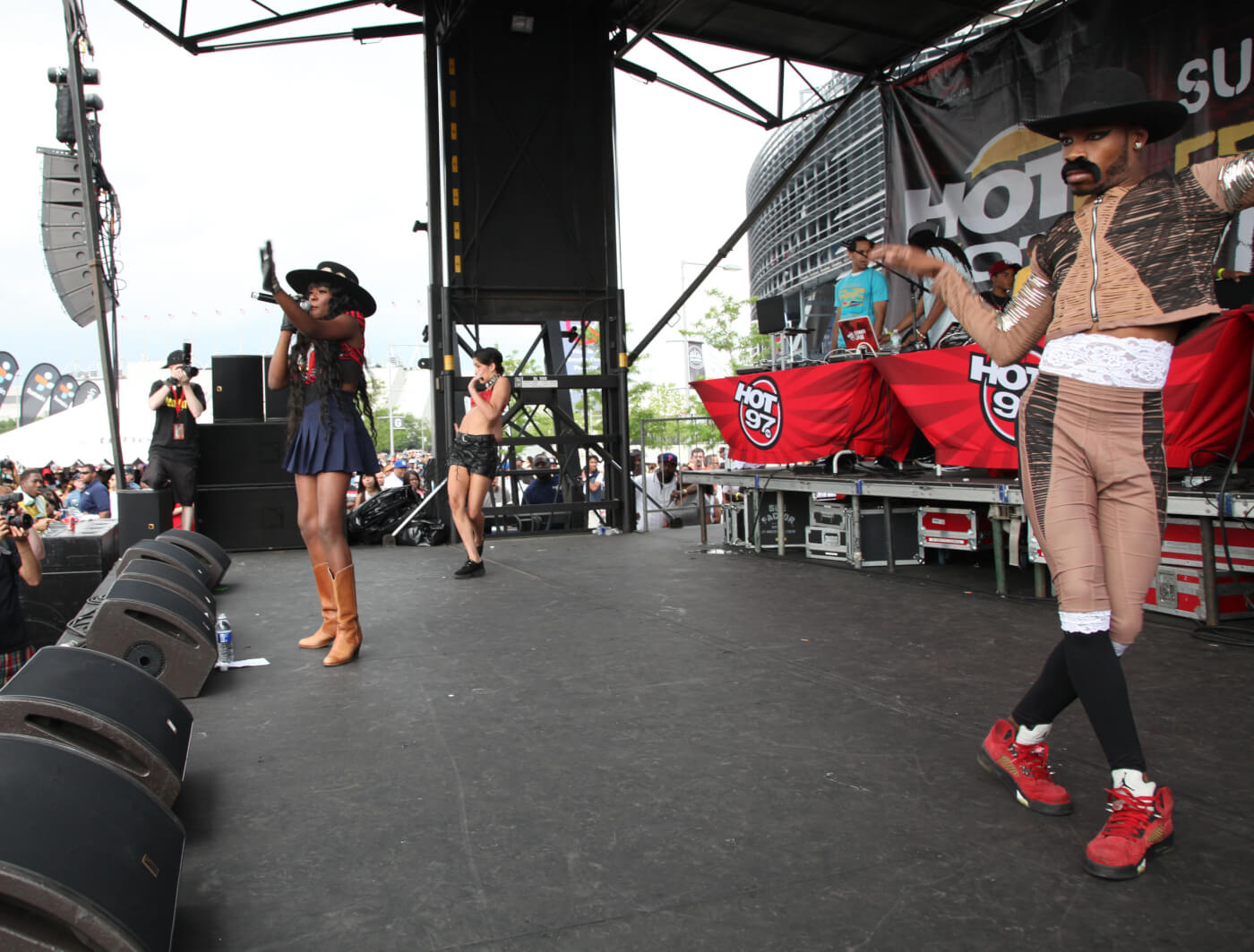 Significant inspiration behind Drag Race stems from New York’s ballroom scene circa ‘70s, ‘80s, and ‘90s. The premise is all too familiar: a number of houses walk against each other, judged thoroughly on their dancing, costumes, aesthetic and persona or attitude. The first “House” was formed in 1977 by a trans woman, Crystal Labeija, looking to differentiate the performance at her balls from others at the time. From voguing to an eclectic array of categories (Butch Queen up in Pumps), “the shade of it all” to Mother Ru, much of the fashion, dance, language and music we consume on a weekly basis through VH1 is thanks to this counter-culture movement.

But there’s one aspect of the ballroom scene that Drag Race is very slow to borrow from: membership. The ballroom scene and the house system served as safe spaces — chosen families — for predominately Black and Latino queer youth facing systemic, familial and communal discrimination. Looking to remedy and buffer against the rampant racism of the wider queer community, the houses largely catered to queer people of color. The houses further gave rise to a complex gender system which includes “butch queens,” “femme queens,” “butches,” and “women.” The toying and blurring of traditional forms of gender — whether through accentuating the performer’s masculinity or femininity — served as a parody of heterosexuality and gender alike. Drag flourished as an artistic expression: to experiment, blur, confuse, celebrate. Drag was performed by men, women, butch queens, and femme queens alike. Drag was inherently political.

It therefore seems strange that in a time where we’ve come to note the mainstreaming of new ideas beyond binary gender (trans, non-binary) and sexuality (pansexual), where lines between masculinity and femininity have come to blur, where traditional notions of how the body must perform are constantly eroding, a show like Drag Race would demand entry based so squarely on genitalia.

Beyond this, it’s important to recognize that the mainstreaming of these new ideas is also under threat in a Post-Trump world, where healthcare protections for the Transgender community are at risk, where violence and murder is a devastating truth. While not every drag performer is Transgender, it would be completely misguided to not recognize the tremendous influence the trans experience has had in shaping the performances we see today.

If we are to agree that drag is art, exploration, parody and the coy blurring of gender and sexuality — as the ballroom scene has given life to — then it’s ultimately disappointing that its biggest stage only permits license and access to a specific subset of the queer community: gay men. And while I’m sympathetic that gay men have a long and overflowing history of being denied spaces in television, film, and theatre, I’m more sympathetic to the fact that we also tend to dominate many of the queer spaces we are given access to. Double-points for white gay men.

Even Drag Race isn’t immune to this overarching dominance of whiteness. “Drag Race has a Race Problem” wrote Garrett Schlichte, addressing how the show largely pedestals the artistic “avant-garde” form of white drag over its black sisterhood, and further interrogating the insidious racism of the show’s fandom: “If you’re pretty and white you can get away with murder.” Season 10 and the show’s treatment of The Vixen in addition to outside commentary from the fandom is prime example. At times the show has also been an outward vehicle for its own racism: two episodes have now featured a Native American Headdress (Raja in Season 3 and Monet X Change in Season 10). To any future contestants reading: just don’t — it’s much more difficult to wear a headdress than to not wear a headdress — and having to explain to members of a culture why they “shouldn’t be upset” or that they “just don’t get the art” isn’t a great look.

While Drag Race has made incredible waves in how mainstream audiences experience drag — undoubtedly applauded for its inclusiveness and diversity — it can certainly do more. Coming into Pride Month we recognize and honor our queer history: those that paved the way for the community and culture we see today. Stormé DeLarverie — a black biracial butch lesbian and, well-known drag king — is historically cited as one of the initial catalysts of the Stonewall riots. There shouldn’t be any reason why Stormé’s legacy couldn’t be memorialized in and platformed in future Drag Race casting and membership.

To demand broader inclusivity in Drag Race, however, would be to grapple with the reality that much of its viewership and formatting is designed for the male gays under the male gaze — both in how it approaches the “quintessential” feminine form (“fishy”) and how it takes jab at the gay man’s “most prized” body ideal: Ru’s round-up of the shirtless, masc, muscle “pit crew.” Much of the show’s humor and frame of reference — its continual self-deprecation and parody — circles tightly around gay men’s sexuality and experiences. To demand more would be to think deeper about how that form of parody and ridicule could wash over other identities and their tropes.

While it’s difficult to imagine a stampede of women (both cis and trans) trampling over each other — and our favorite femme/butch queens — for that year’s supply of Anastasia makeup, opening access to women (drag kings and queens alike) will only further the show’s goal of offering herstory and honoring the ballroom scene. We should be more open to experimenting and blurring of the show’s current format and premise.