Romance is the ideal in one’s life and it is very lonely living with it lost.

–“The Good Anna” from Three Lives by Gertrude Stein

Queer existence during the pre-Stonewall era was riddled with hatred, oppression, and harassment. Women in the post-war 1940s and ‘50s were expected to facilitate more domestic roles in order to create a heteronormative nuclear family. Lesbianism was not an option; instead, it was considered a perversion.

Nevertheless, the 1952 Kinsey Report found that six percent of women between the ages of 20 and 35 had a type of lesbian curiosity. Most lesbians during this time lived heterosexual lives in order to fulfill societal standards, concealing their sexual identities and effectively forgoing their true selves. Others refused husbands but kept things as covert as possible for the sake of safety.

“Women in the 1930s, 1940s, and 1950s often held hands as they walked down the street or danced together at public dances,” award-winning digital and film artist Michelle Citron tells INTO. “No one thought that meant they were lesbians, and most weren’t.”

For almost 50 years, Norma Roos and Virginia Kaitchuck lived together in the Northside neighborhood of Rogers Park in Chicago before dying in 1999 and 2001, respectively. Brief moments of affection — a foot touching a leg, a hand grazing a shoulder, or a head lying in a lap—are seen in the snapshots that Citon found in boxes full of more than 2000 photographs, black and white memories of two young lovers whose lives were lived in secret. Citron was researching her narrative Mixed Greens when she met Patrick Gourley, who lived behind Norma and Virginia and was left with the task of cleaning up their home after they died.

As the author of Home Movies and Other Necessary Fictions, a book on how snapshots and home movies create a  visual history that can both tell specific stories as well as speak to broader LGBTQ culture, Citron would find Norma and Virginia to be compelling subjects for her new film,  Lives: Visible. 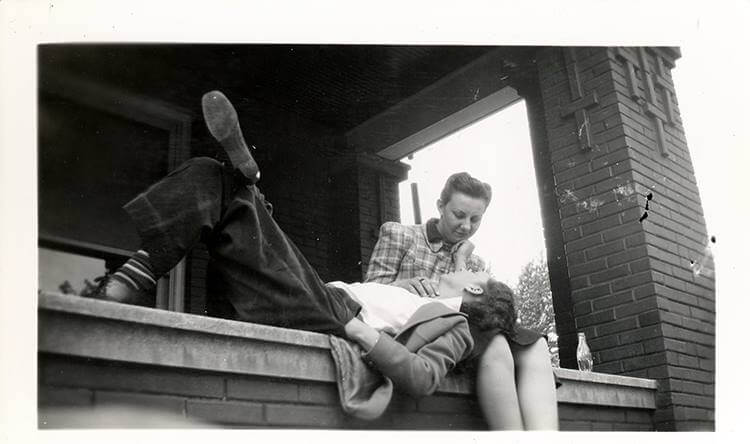 “I grew up in the 1950s and clearly remember my mother and her best friends showing this kind of affection in public,” Citron says. “I think that public norms of how women acted together, and what that meant, changed in the 1970s. But you also have to keep in mind this invisibility was true for lesbians who ‘passed’ as straight. Women who looked very butch had to be extremely careful in publicly showing affection for other women. It was dangerous for them to do so.”

Not much is known about Virginia, who remained inside of her home into her 70s and didn’t discuss much of her life. Norma was outgoing and lively and worked as an AT&T engineer, very personable by comparison. 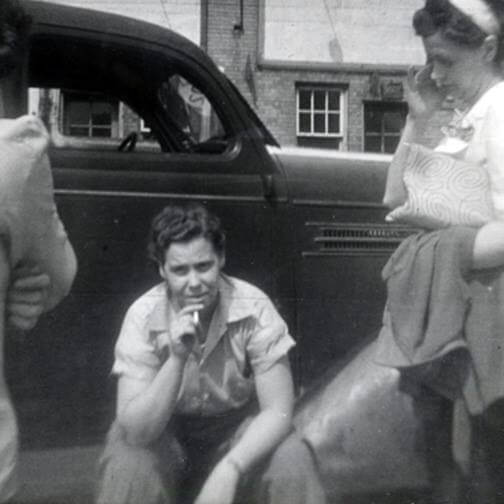 “There’s so much these snapshots tell us,” Citron tells INTO. “They show that Norma played in the women’s professional baseball league during WWII. By the 1950s she was a national champion bowler as well.”

The images of the couple’s younger years are pertinent in understanding the visibility, through small and very much in the details, of the mid-century lesbian community. Since Norma and Virginia were closeted their entire lives, the displays of public affection found in the photographs collected by Citron exemplify their inability to truly hide who they were.

“The snapshots also show how this community of white, working-class lesbians who lived on the Northside spent their time,” Citron says.

The photographs are crucial and remarkable because of the erasure of gay history; archives have been lost, stories have been eliminated, names forgotten. Norma and Virginia were just your average couple, who existed, kissed, loved, and built memories.

“Over four decades we see them gather together for holidays, dance and drink at house parties, hang out at the beach, and go about their daily lives as they switch partners and age,” says Citron, who notes that the photos are primarily taken between 1939-1975.  They are now a part of Lives: Visible,  the 58-minute film (which is available from Women Make Movies).

Lives: Visible features images of the couple with narration by Citron, who explains the history of the couple and their life in a time preceding gay liberation. She interviewed a lesbian who had lived down the street from the couple, as well as a gay man who befriended them and took care of them during the last decade of their lives. 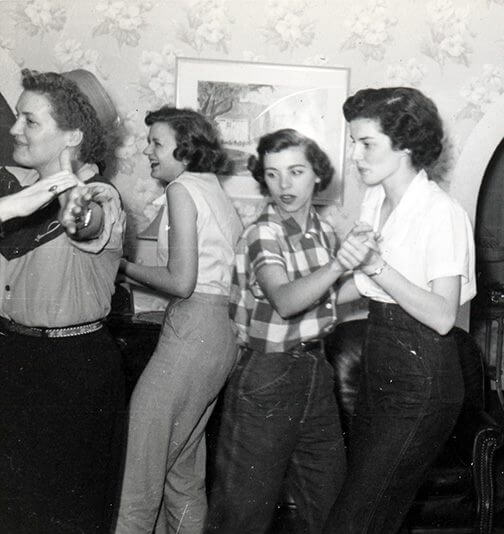 The film is a continuation of Citron’s work, which has a theme of creating fabricated home movies of lesbian life. Growing up in Boston, Citron says her father would take home movies and she incorporated those movies into a 1978 film, Daughter Rite.

This defining affection—though small and subtle—can be seen in the honest and intimate gestures between Norma and Virginia; finally visible after all these years.