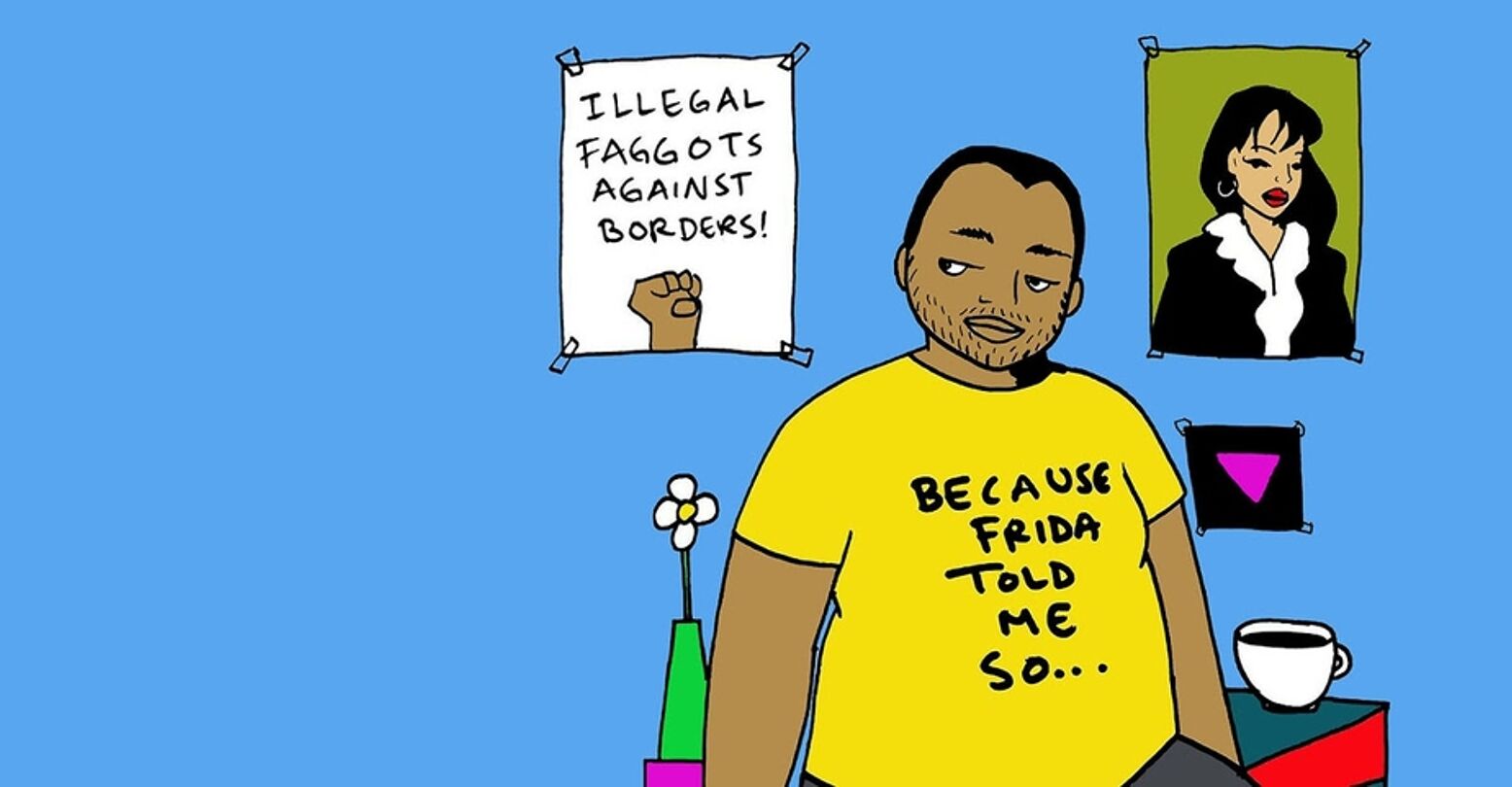 Since its establishment in 2012, the immigration program known as DACA has improved the lives of countless undocumented LGBTQ people, especially POC–and it’s about to end.

On September 5th, President Trump announced that he was repealing DACA, and since then 122 Deferred Action for Childhood Arrivals (DACA) recipients have lost their status every day. Trump offered no clear plan for the nearly 800,000 people enrolled in the program, 36,000 of whom identify as LGBTQ–a fact that has reignited conversation about what it means to be undocumented and queer.

Living life as an #undocuqueer has been likened to existing in a closet within a closet. That experience has fueled the work of Mexican-American artist Julio Salgado, whose brightly colored images depict key individuals and moments of the DREAM Act and migrant rights movement. Undocumented students and allies across the country have used Salgado’s artivism to call attention to the youth-led resistance to DACA’s repeal.

Artivism, the combination of art and activism in the face of oppression, is created to resist the normalization of hate and prejudice. After years of noticing a lack of representation of people like him in media, Salgado started Dreamer’s Adrift, along with 3 other undocumented college graduates. Dreamer’s Adrift is a media platform led by undocumented creatives with the goal of taking back the undocumented narrative through videos, art, music, spoken word and poetry.

The original mission of this contingent was to bring attention to the DREAM Act, a bipartisan bill that would have given undocumented youth an opportunity to become legal residents, and to document the undocumented. Since then, the project has evolved and expanded, delving into a variety of different conversations happening within American politics, but via the immigrant lens.

After recently meeting Salgado at Into Action in Los Angeles, I was able to sit down with him for an interview. 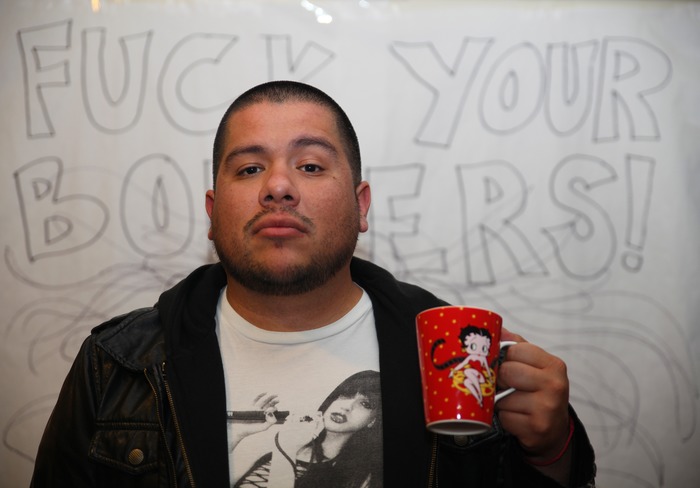 Where were you the day Donald Trump announced the repeal of DACA and how did you feel?

I was at Connecticut College doing an art lecture when the announcement about the DACA repeal was made. I’d just celebrated my 34th birthday and I was so mad that this dude had to ruin my birthday month–I’m a Virgo, we celebrate all month. I remember getting a lot of texts from friends. So many things went down in 2017 that it really seems like a blur. I can’t say that I was surprised that he decided to take DACA away. Is anyone else surprised anymore by the things that come out of his mouth anymore? By the things that he Tweets? I suppose that’s the scary part. Something that I told some of the students that attended that lecture was that if we lived without DACA before, we would make it. Our people are resilient.

How has being queer and undocumented influenced your art?

Being queer and undocumented has deeply influenced my art. I’ve been making art since I was a child and I even took a couple of courses when I was in college. But I always felt that art was a past time, something that only people with money could make a career out of.

When I started doing editorial cartoons in college, I discovered the power of political art. When I finally graduated college in 2010 with a degree in journalism–after nine and a half years of trying due to my undocumented status–I was a bit lost. But around this time, many undocumented organizers had enough and were taking to the streets and disrupting the narrative of being undocumented by coming out of the shadows and even getting arrested in order to pass the Dream Act.

Organizers like Yahaira Carrillo, Prerna Lal, Tania Unzueta and Mohammad Abdohalli were some of the first folks that I met that proudly came out as undocumented and queer and that moved me to not only come out myself but to document these actions through art. It was their organizing back in the day that influenced me to keep doing this work. 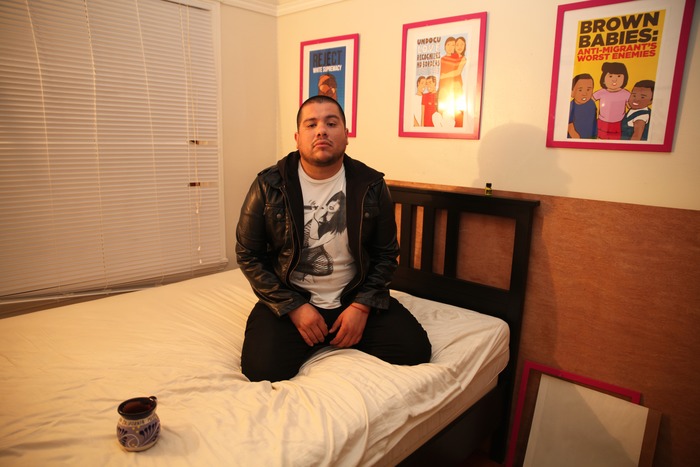 You often touch on the importance of representation of people like you in media in your work. Have you noticed any significant progress in this area?

I definitely think we are making progress in media as far as representation. One of my favorite shows last year was the second season of Insecure. I mean, Issa Rae’s career was all about doing it on your own terms in an age where Hollywood is still figuring out the internet.

I came of age when Will & Grace and Ellen DeGeneres pushed barriers for queer people, even if the narratives were flawed. These shows inspired people like me to tell even more complex stories about queer people of color that didn’t center whiteness. And I know that the work I do is flawed but I hope that some young queer gets inspired to tell their own story in their own art medium.

What do you think about the recent commodification of undocuqueer voices by [mainstream] media?

While I am a firm believer of having our voices be heard in media, it is also important that we get to be the ones who drive our narratives. This means, that journalists shouldn’t just go for the narratives that seem digestible for audiences.

We are complicated human beings.

Tell me about Dreamer’s Adrift.

We started Dreamers Adrift back in 2010 when me and three other college friends found ourselves with a little flip camera and the urge to tell immigrant stories that we weren’t seeing in the media. As I mentioned, 2010 was a huge year where many of us thought we had a huge chance for the DREAM Act to pass. It didn’t. But what I noticed was that a lot media that was out there wasn’t made by us.

Similar to the drawings I was making, we started using video as a way to express our immigrant feelings. We made this video called The Science of Dream–inspired by The Science Of Sleep–where we imagined the Dream Act as a relationship that continues to fail. Through Dreamers Adrift we also created the Undocumented & Awkward series where we used humor to touch on issues like dating while undocumented and queer, being excited for working office jobs and working hotel jobs after graduating college.

For us, using humor was like therapy when reliving some of these stories. It was very important for us that every participant in this video was undocumented and a lot of them would come up with the concept for the videos.

In what ways have you noticed Dreamer’s Adrift making a change in the latinx community?

I believe that the reason why Dreamers Adrift made the rounds in our community was because the people behind these videos were actually the ones being affected by the issues we were discussing. We started getting messages from students all over the country about how these videos were helping them get through tough times and how they felt so real.

You’re proudly affiliated with Montebello’s Club Scum. What makes this queer club night special in contrast to others?

Club Scum!!!!! Oh man those parties rule! Ray and Rudy have basically recreated my queer teenage years by hosting a party that plays Hole and Gloria Trevi in the same playlist! When I first heard about Club Scum I was still living in the Bay and I actually went to the one they did in San Francisco. When I moved back to L.A. I offered my art skills in any way I could. I did a couple of images from two nights and a flyer for their December party. Anything for the Club Scum crew! What people need to understand is that in time of crisis, we cannot let our spirit to be killed by the powers that be. Parties like Club Scum allows the Latinx weirdos who grew up listening to punk and rock en espanol get together and forget at least for one night that we are allowed to celebrate ourselves even if politicians and white supremacists cannot see our humanity.

Projects you’re working on right now that people should know about?

I’m currently working on various projects to uplift the voices of undocumented immigrants in pop culture. Currently the only stories you hear are the good immigrant vs. bad immigrant narratives. My goal is to work with other communities who’s stories don’t get the same highlight such as unaccompanied minors telling their own story through film.

I have been doing college visits and doing art lectures and I plan to do a couple this year. I also want to do an art book that documents the work I’ve been doing for the past 10 years. So if anyone reading this has the hook up to a publisher, hit me up!

What words would you use to describe what it’s like to be an undocuqueer artist today?

I’ve actually been using the hashtag #IllegalsInTimesOfCrisis in a lot of the pieces that I post on Instagram because that’s exactly what we’re doing. If you’re an artist that’s on Trump’s hate list, you are creating under crisis. But that crisis can lead to amazing work that challenges these anti-other narratives.

I use words like “illegal” and “faggot” all over my work with a very intentional purpose of throwing back the hate to those who wish I disappear. As an artist I have the freedom to do that. I understand the power of words, but when I use these words in my art, it’s like I’m telling the haters: what else you got for me?! 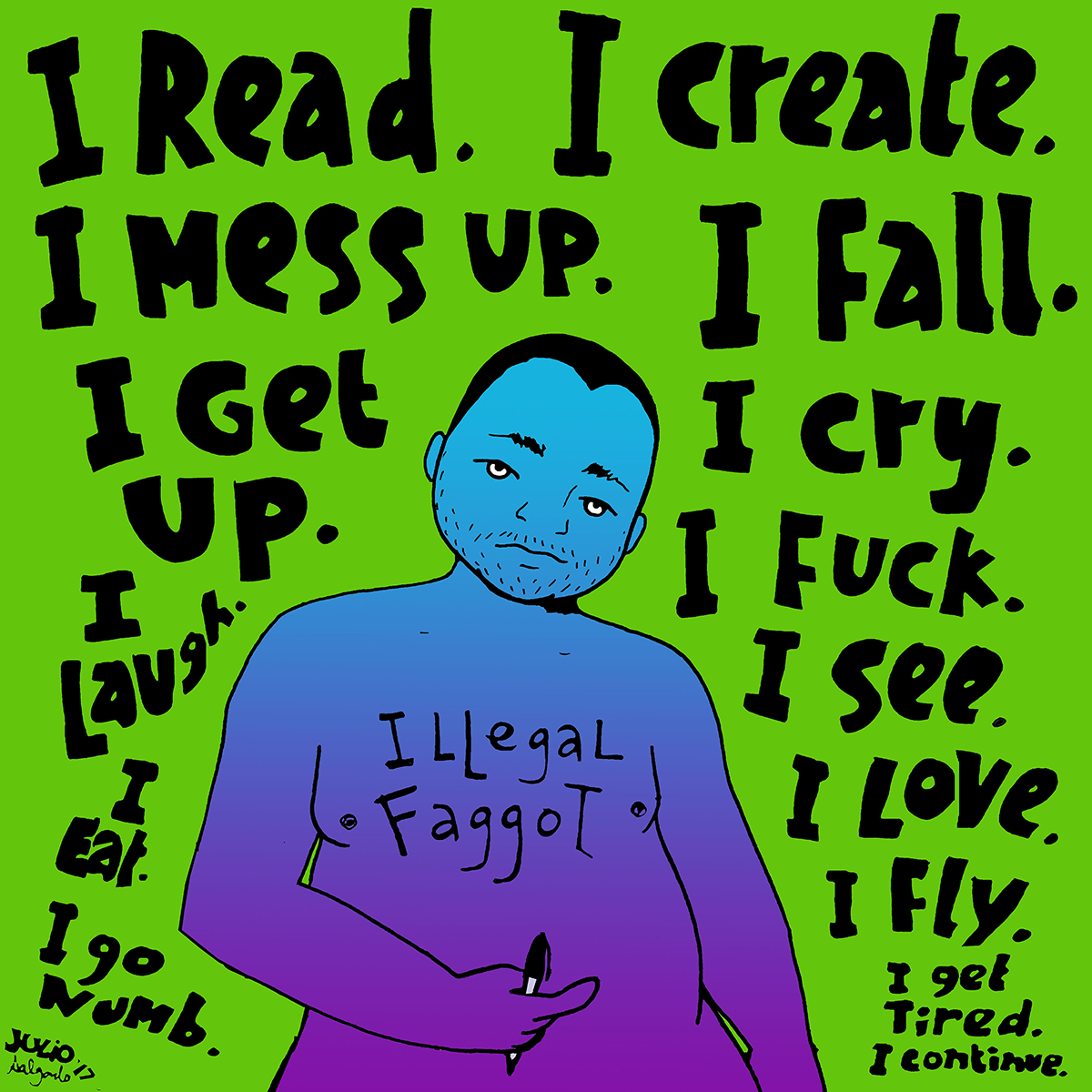 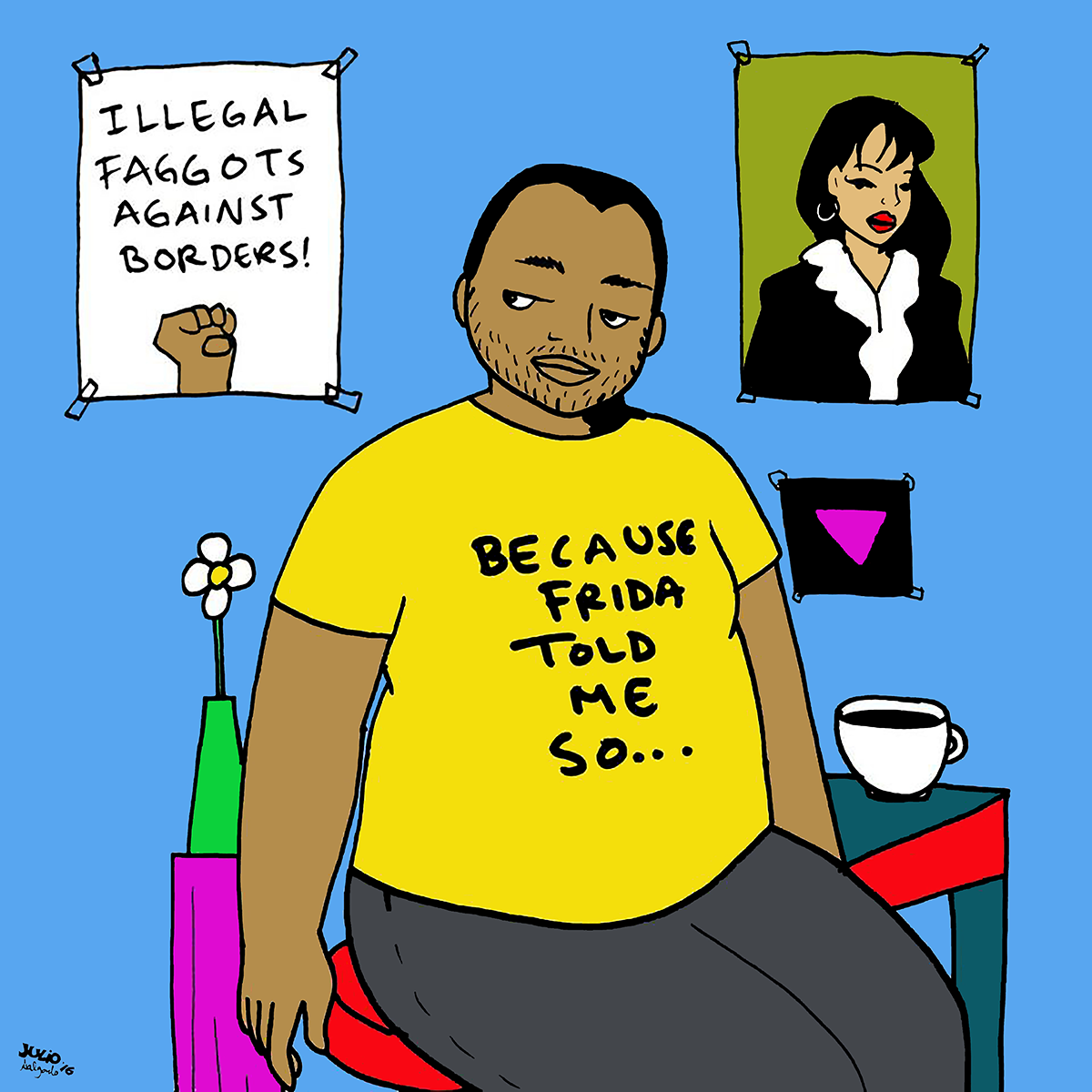 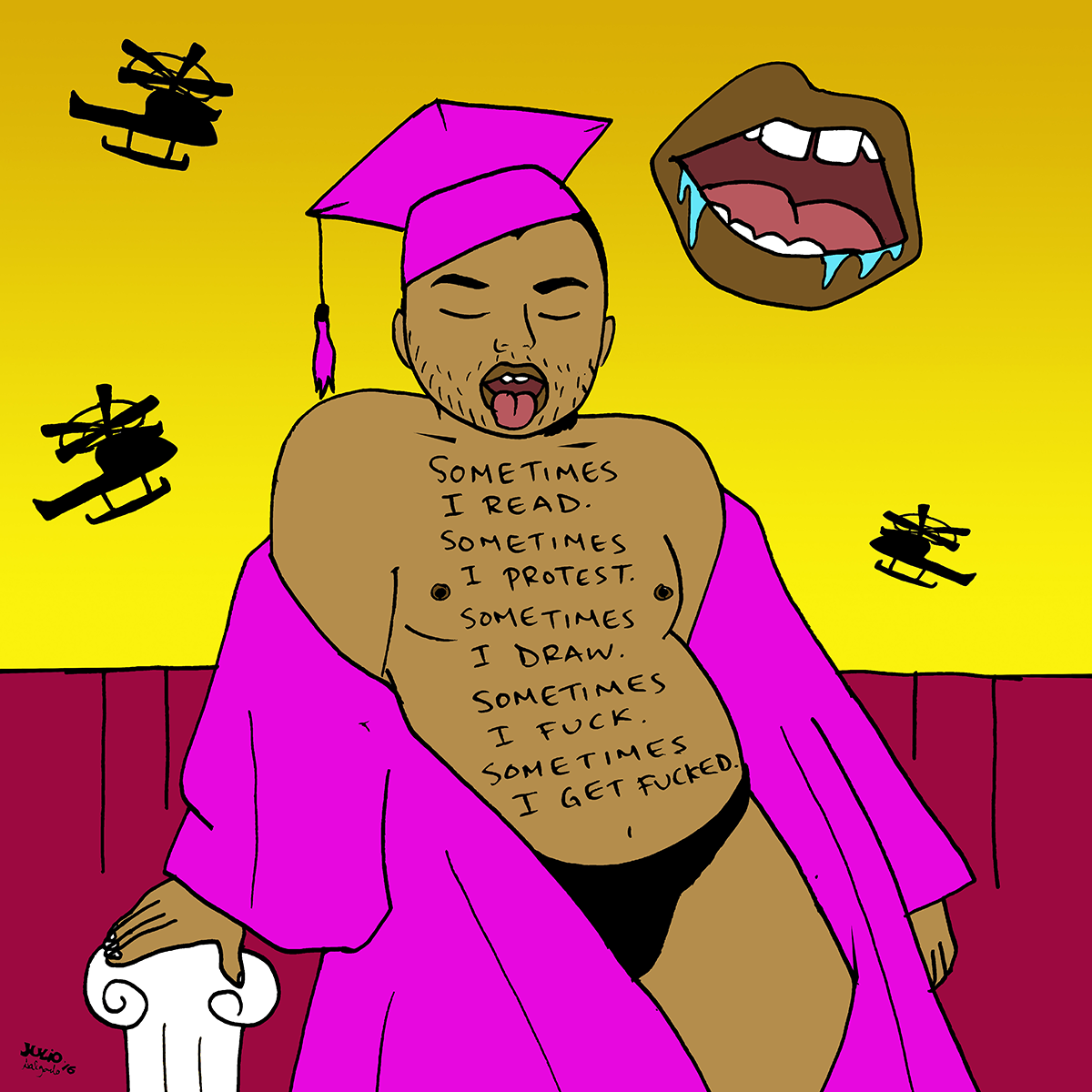 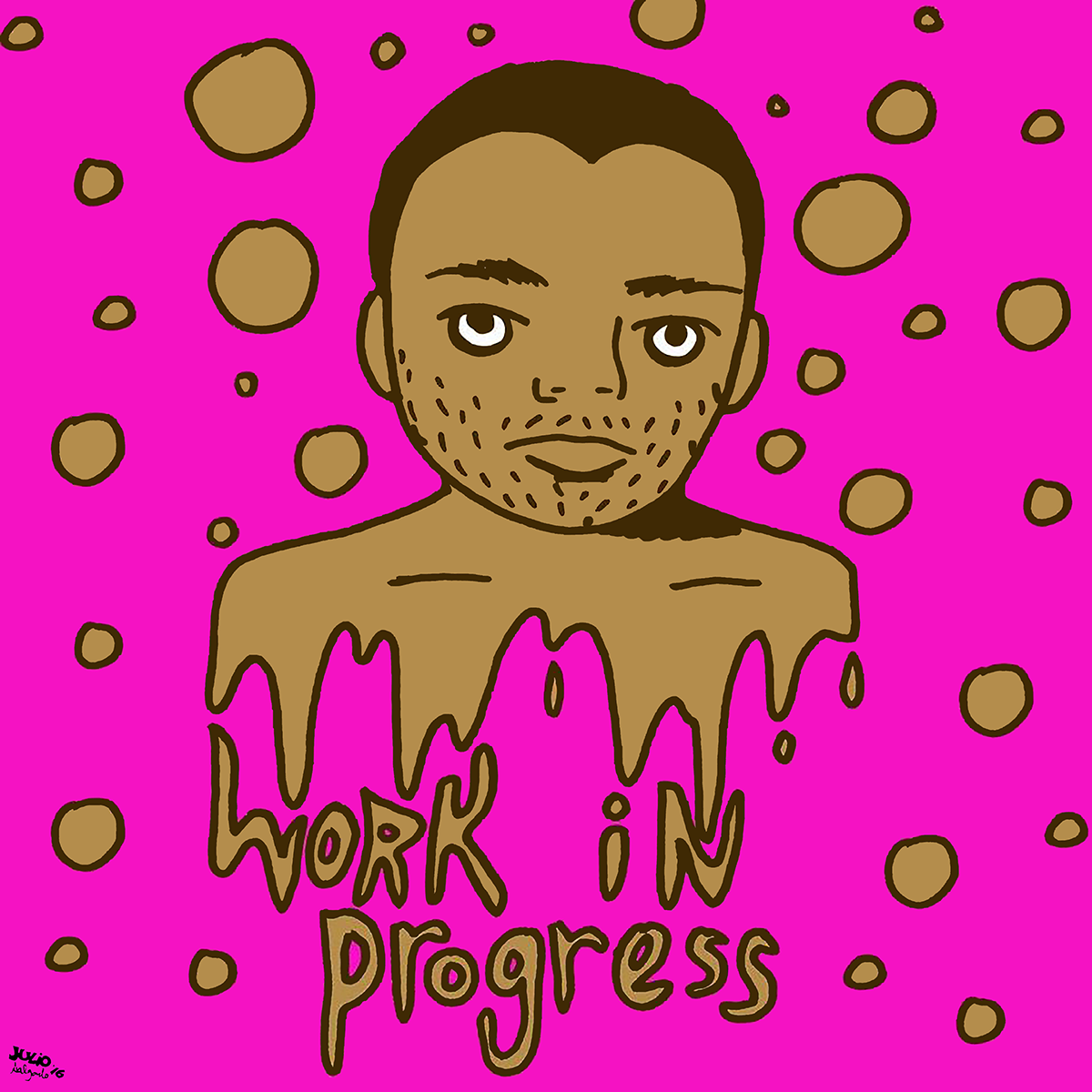 To see more of his artwork and other collaborations, you can go to juliosalgadoart.com.