It’s not impossible for Proposition 1 to pass in Anchorage. But new results in the ballot count released tonight show it’s about as close to impossible as it gets.

Numbers released on Thursday evening by the municipal clerk indicate that the city’s anti-trans bathroom measure is on a swift path to defeat. Almost 53 percent of voters (52.9 percent, to be exact) cast a ballot against Prop. 1 in Tuesday’s elections, while 47 percent favored the measure. 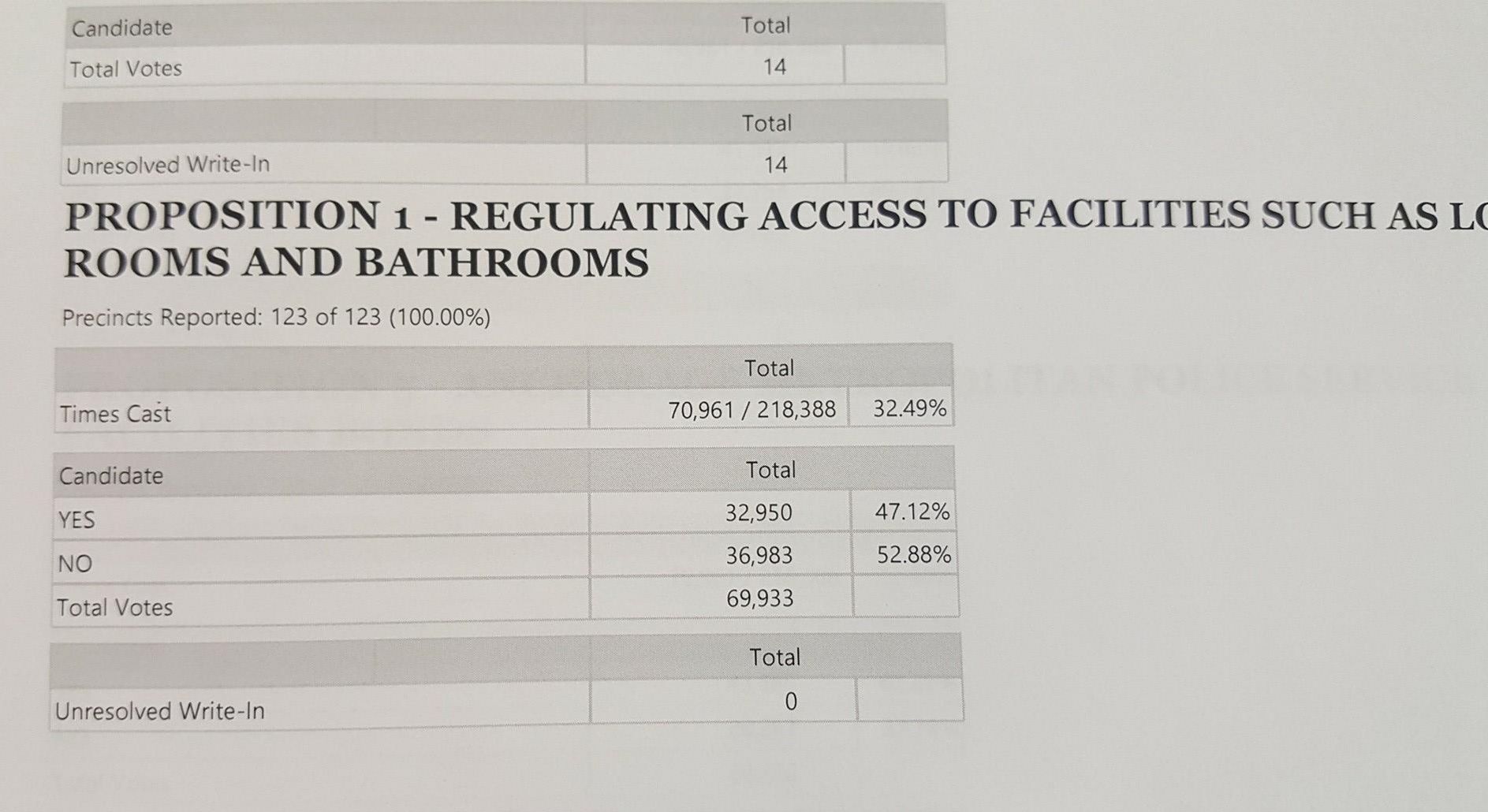 After the numbers were released, openly gay assemblyman Chris Constant declared Prop. 1 “defeated” on Facebook, telling INTO that the vote was a “miracle.” Although there are 8,000 votes left to be counted, he claimed the supporters of the discriminatory proposal “can’t win” at this point.

Pulling off an upset would be a gargantuan task, indeed. In order to claim victory, the “Yes on 1” campaign would have to nab 81.6 percent of the remaining vote.

“We are retaining a comfortable majority in favor of upholding the transgender nondiscrimination law, but anything can happen in an election,” Ward says. “We will continue to vigilantly monitor what comes out of the municipal offices as well as make sure our transgender community in Anchorage is cared for while their basic protections continue to be at stake.”

The totals indicate “that Anchorage voters rejected fear and intimidation to affirm that our transgender neighbors and friends should have the same basic protections under the law,” she adds.

“While we wait for the final results in Anchorage, we continue to be optimistic that the voters have rejected the discriminatory Proposition 1,” says NCTE Media Relations Manager Gillian Branstetter in a statement.“It’s noteworthy that, while over 200 state bills attempting to limit the rights of transgender people have failed in recent years, Proposition 1 is the first to be put on the ballot and appears to be losing handily.”

Alaska Family Council (AFC), the group which spearheaded the “Yes on 1” campaign, says no matter what happens in the race, the fight continues.

“Despite the outcome, we’re encouraged that more than 47 percentof Anchorage voters saw through the incredibly deceptive messaging of the No on Prop 1 campaign,” says AFC President Jim Minnery. “They did everything in their power to shamelessly obfuscate the truth. Even though they poured nearly ten times the amount of money we did into the effort, and the vast majority of that came from outside sources, Prop 1 lost by only 4,000 votes roughly.”

“This issue is far from over,”he continues in an email toINTO. “We have numerous other strategies we’re looking at now to ensure that women and girls don’t have to be in a state of undress in front of biological males.”

“The truth is unchangeable and although we grieve for those struggling with gender dysphoria who are certainly not helped by this public policy defeat,” Minnery concludes,“we are encouraged by Psalm 119:89 that reminds us His word is eternal and it stands firm in the heavens. Onward Christian soldiers.”

In an email to supporters released on Wednesday night, even before the latest ballot tallies, AFC President Jim Minnery admitted it was “reasonable to think we may yet fall short.”

If the current totals hold, the defeat of Prop. 1 would represent history made in Alaska: It would be one of the first instances in which voters upheld protections for transgender people at the ballot box. In 2015, Houston rejected a trans-inclusive nondiscrimination ordinance by a margin of 61 percent to 39 percent.

The effort to defeat the ordinance ran a smear campaign branding transgender people as dangerous bathroom predators who would harm women and children if given the chance. A 3o-second TV spot aired by Campaign for Houston depicted a man in a plaid shirt cornering a little helpless girl in who was alone in public restroom, warning of the specter of “registered sex offenders.”

A video featuring a woman named “Kate” recalled an incident in which she shared a locker room with a transgender woman (referred to as a “biological male”) in a city pool. When she complained to the facility’s staff members, they told her she “was the one with the problem.”

“Predatory men are using these laws to violate women,” she concludes in the TV spot, which was aired on local stations.

The advertisement, however, was met with controversy when INTO revealed that the video’s subject isn’t from Alaska. The speaker is Kate Ives, and she lives in Minnesota, where she attempted to pass an anti-trans bathroom bill in the state legislature.

A homeless shelter featured in a “Yes on 1” ad distanced itself from the campaign after conservative groups failed to ask their permission to include them.

In the 30-second segment, a narrator claims that on January 29, a transgender woman was ejected from Downtown Hope Center because she “wanted to sleep and shower with the women.” Now the individual is “claiming gender identity discrimination” and is using Anchorage’s nondiscrimination ordinancepassed by the Assembly in 2016to do so, the advertisement claims.

But when INTO contacted the shelter, a representative for Hope Center said they never signed off on it. “What Jim Minnery and Prop. 1 did, they did without talking to us,” said spokesperson Charlee Lauree in a March interview.

This publication will continue to post updates as final results in the Anchorage vote become available. Fair Anchorage is holding a rally at 5pm tomorrow.

But Constant believes the vote is a hopeful sign as the LGBTQ community looks ahead to pending battles in Massachusetts and Montana, which have their own anti-trans initiatives on the ballot this year. He says Anchorage is proof that “it is possible to beat back these bathroom bills.”

“This is a historic moment for Anchorage, for Alaska, and for our country,” Constant claims.

Note: This story has been updated to include comment from the NationalCenter for Trans Equality and the Alaska Family Council.